Aviation is a strong contributor to the global economy, facilitating trade across cities, countries and continents and increasing market access. Globally, commercial airlines have been growing at an accelerated rate after a short drop due to the 2008 financial crisis. While the speed of expansion is slowing, expectations for the industry are positive.

Boeing says air travel growth has been a steady 5 percent on average since 1980. Between 2014 and 2015 revenue passenger kilometers (RPK), the number of revenuepaying passengers in a craft per distance traveled, rose 6.5 percent. Through the first eight months of 2016, the sector expanded at a slower pace. In February RPK rose 8.6 percent globally in comparison to the same month in 2015. By July, RPK had slowed to a 6.4 percent clip while August saw it shrink to 4.6 percent, according to IATA.

It was a similar story for the rate of available seats and occupancy. Available seat kilometers (ASK), calculated by multiplying the total seats available in an aircraft by the number of kilometers flown, globally climbed 5.6 percent between 2014 and 2015. This number is used to measure the total capacity of an airline. In February 2016 ASK grew 9.6 percent in comparison to that month in 2015 but by August this number had decreased to 5.8 percent. Passenger load factor (PLF), a number used to calculate the number of airplane seats occupied by paying passengers, showed a subtle decline of 0.9 percent in August 2016.

Aviation in Latin America, however, is surpassing the growth of the overall industry. In August 2016 RPK in the region expanded 6.7 percent, although available seats rose 1.7 percent and PLF was up 1.1 percent during the month, according to IATA.

For many airlines, the route through the Mexican market has been a bumpy ride. As El Financiero reports, between 1995 and 2015 about 20 airlines were created and almost 20 airlines disappeared. Of the airlines that weathered this period, most are growing or are at least stable. This also signaled the end of the oldest airline in Mexico, Mexicana de Aviación. This giant’s bankruptcy had deep effects on the industry as it freed highly contested slots in AICM, which were quickly taken up by Volaris, Interjet and VivaAerobus. While none of these airlines were operational before 2005, by August 2016 they held 63.1 percent of the national market between them.

Overall, the aviation sector in Mexico is growing. CANAERO reports that during the first quarter of 2016 the number of passengers transported by air carriers rose 12.6 percent in comparison to the previous year. The chamber expects 2016 to end with 80 million passengers, up from 72 million in 2015, 41 million of whom flew with a Mexican airline.

Grupo Aeroméxico, which includes Aeroméxico and Aeroméxico Connect, reported year over year ASK and RPK growth of 3.8 and 3.6 respectively during the second quarter of 2016. During that same period, Interjet reported an increase of 12.1 and 8.3 percent in those two indicators. Volaris, which measures assigned seats per mile (ASM) and revenue passenger miles (RPM), reported 19.4 and 24 percent rises, respectively. VivaAerobus reported the largest ASK ad RPK increases during the second quarter of 2016, 34.4 and 35.6 percent.

In terms of occupancy, Mexican airlines’ PLF varies widely from one to another. Magnicharters and Aeroméxico reported 82 and 79.1 in 2015, above Latin America’s average of 78.8 according to IATA. Volaris, VivaAerobus, Interjet and Aero Calafia were slightly below the region’s average with reported 77.9, 77.8, 72.5 and 74 percent. TAR Aerolíneas and Aeromar lag well behind at 41.3 and 40.4 percent each. The international market is dominated by foreign airlines. While Aeroméxico holds the largest share among the country’s airlines, with 16.2 percent, Volaris and Interjet’s participation is in the single digits, at 7.1 and 4.8 percent.

Air cargo is an essential part of a globalized economy. As global value chains become more complex, the transportation of parts for processing across countries and continents becomes increasingly prevalent. If a product is urgently needed or perishable, air cargo can be the fastest and most efficient alternative, especially when it is time or temperature-sensitive and has high value. Forecasts for the sector are mostly positive. Globally, IATA projects that air cargo will continue to expand at an annual clip of 4.1 percent until 2018, led mainly by emerging economies in the Middle East and Africa. Boeing forecasts a 4.7 percent year on year growth until 2033, led by Asia.

Domestically, air cargo has seen more timid gains over the past few years. The sector enjoyed steady growth until 2008 but regressed in the wake of the global financial crisis. The years 2008 and 2009 each saw transported tons reduce 10 percent from previous years. In 2010, the sector speedily recovered to pre-crisis levels but has flourished little since. According to DGAC, 2015 saw a total of 695,052 tons transported by air, a 6 percent upswing from 2014. Due to the close relationship between air cargo and trade, the prolonged period of limited growth can be related to a weak economy, both in the case of Mexico and its major trade destinations, and slow trade gains.

Mexico has to tackle infrastructure issues. As Francisco Pertierra, the Director General of AeroUnion says, smaller airports “do not have the necessary infrastructure to load and unload large cargo airplanes.” This forces cargo companies to either use smaller aircraft or to move loading equipment to the final destination, increasing costs. Another hurdle is the saturation of AICM. Because a significant amount of cargo stops at Mexico City, the lack of slots poses a logistics problem. “In that sense, the NAICM will be beneficial since it would allow us to perform more flights,” said Pertierra.

Both commercial and cargo aviation are facing hurdles brought about by market slowdowns but the drop in oil prices has been beneficial for the sector as fuel eats up a big portion of costs. Jet fuel represented 35 percent of total costs for Aeroméxico in the first nine months of 2014. During that same period in 2015 the percentage dropped to 25 percent, as the price of oil plummeted.

Another positive is the implementation of the MexicoUS BASA, which is expected to “offer important and attractive growth opportunities for both countries,” according to Miguel Peláez, Director General of DGAC. “The flexibility that will come as a result will generate new business opportunities for airlines.” 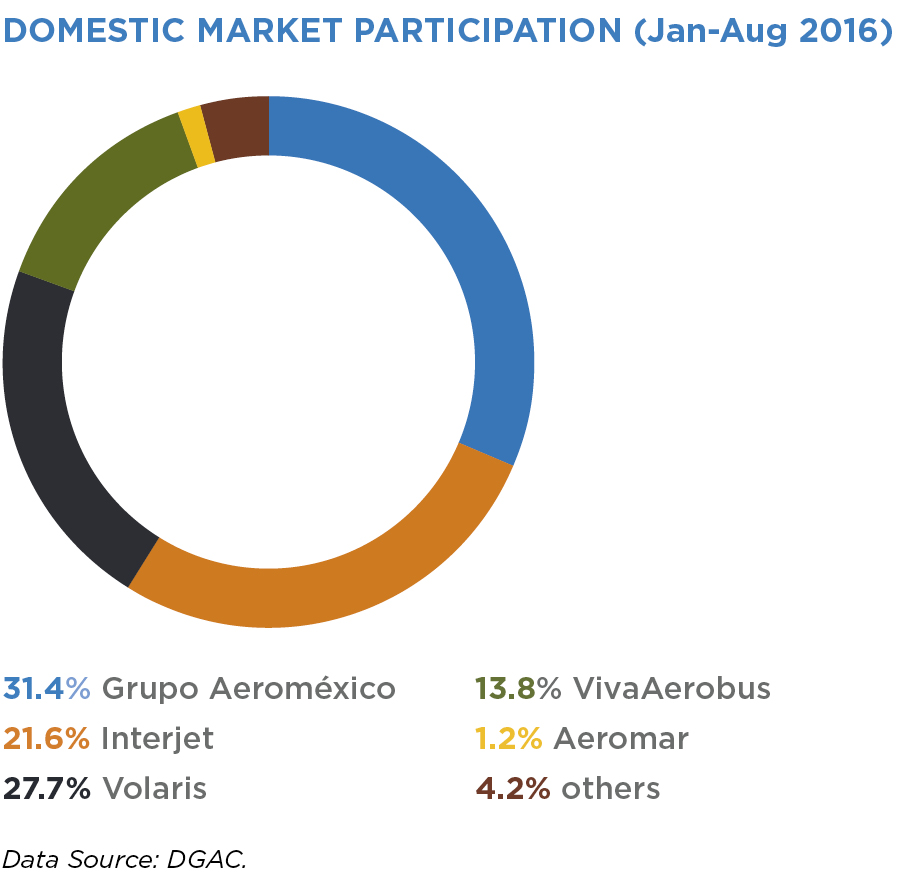