As Baja California enjoys a period of accelerated growth, access to raw materials is becoming a crucial factor for the success of the local manufacturing industry, including the aerospace sector. Genaro Manilla, Director General of Coast Aluminum, says that among the state’s main challenges is consolidating its supply chain amid a lack of local suppliers. “Most raw materials used in the state are imported and acquiring them domestically would help local companies increase their competitiveness,” he says. “The challenge, however, is that many complex and time-consuming certifications are required to import materials to the state, especially for the aerospace sector.”

Coast Aluminum, a distributor of various aluminum alloys for the automotive, aerospace, metal mechanic, medical devices and infrastructure sectors, is among the few aluminum suppliers in Baja California, which has been instrumental to the company’s accelerated growth. Added to this advantage, the price of aluminum and aluminum alloys have been on the rise in the last few years. According to CAMIMEX’ 2017 Annual Report, the value of aluminum transactions shot up from US$244 million in 2015 to US$3.4 billion in 2016.

Since the use of lightweight materials has become the rule in several manufacturing industries as a way to reduce fuel consumption and reduce emissions, there is a market for aluminum in the aerospace industry, especially for aluminum alloys needed in aerostructures. For instance, aluminum and its alloys amount to 20 percent of a Boeing 787’s mass, while other metals including titanium and steel amount to 30 percent and composite materials to 50 percent, according to Asian Metals.

The National Chamber of the Aluminum Industry (CANALUM) underlines that aluminum is the second-most employed metal after steel and Mexico accounts for 1.6 percent of the global aluminum production. This number amounts to 1.5 million tons and a production that has grown steadily at an average rate of 13.7 percent since 2011.

These local and international trends and a strategic growth plan have provided Coast Aluminum with the opportunity to thrive in the local market. The company’s revenue jumped 30 percent in 2016 and it expects 22 percent growth for 2017. “We have incorporated more clients, some of them for the aerospace sector. Most request AA7075, AA6061 and AA2024 aluminum alloys. We are extremely strong in the north of Mexico so we are helping existing clients to solidify in the state. We can help them to focus exclusively on manufacturing and to forget about inventory. By partnering with them we can strengthen machining operations in the state,” Manilla says. Coast Aluminum acquires its inventory from mills in South Africa and Asia and distributes it in Mexico. 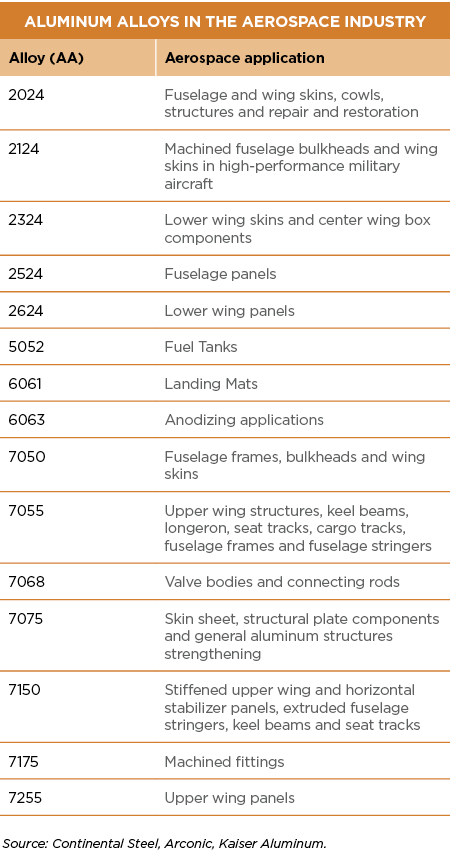 The company’s growth is a reflection of the expanding industrial sector in the state, which can be a double- edged sword. Baja California is growing very fast. In July 2017, the Minister of Economic Development of Baja California (SEDECO), Carlos Bonfante, told media that the state was the one that grew the most in number of companies during 2016. And according to the Ministry of Economy, during 1H17 the state has received a FDI influx of US$1.05 billion, 20.5 percent higher than during 1H16. The local aerospace equipment manufacturing sector received a FDI of US$16.5 million during 1H17.

The constant growth of the aerospace industry in Baja California has brought its share of problems. The state now lacks available real estate for new companies to occupy or existing businesses to expand, which is a challenge that Coast Aluminum faces. “We are trying to expand our plant but it is impossible as there is no room. Industrial real estate is scooped up as soon as it is built and most industrial parks are already full. It is extremely hard to find real estate,” Manilla says. Instead, the company is restructuring its offices in Baja California to maximize its inventory in the available space, while also taking advantage of its facilities north of the border. “We have the advantage of having a 200,000ft2 plant in Los Angeles that allows us to quickly supply to Baja California and to avoid excess inventory. We are fully aware of what local clients need so we can keep an efficient inventory and still supply them in 24 hours.”

To further address its needs, Coast Aluminum went outside Baja California and opened a second facility in Guadalajara, Jalisco additional to its locations in Tijuana, Hermosillo and Ensenada and various spots in the US.

This new facility, inaugurated in July 2017, is 65,000ft2 of area, has eight cutting machines and the capacity to store 6-7 million pounds of materials. This facility will supply all types of manufacturing companies in the Bajio region. “One of the reasons we chose it was the central location, which also will allow us to supply Queretaro’s booming aerospace sector.” The new facility will have a stock of 5 million pounds and potentially employ 80 people by 2018.

One concern for Manilla is the potential hit to local competitiveness from the importation of illegal and poor- quality materials. “Without the proper regulation the sector can become less competitive,” he says. Ironically, the problem was only exacerbated by new regulations that came into force in 2016. “New regulations on the importation of materials implemented in late 2016 are causing trouble for local companies,” Manilla says.

For Coast Aluminum, this problem can also be a market opportunity. “These companies often contact us to supply them but they often require rare alloys such as titanium that we do not handle because they require complex treatment.” Coast Aluminum is studying the pros and cons of importing these materials but “we cannot easily import any kind of material as it might contaminate our existing inventory.”