Well-designed and equipped air transportation infrastructure is key for any country’s competitiveness. In Mexico, as demand for national and international aviation services grows, so does the need to effectively build and operate the airports and heliports where aircraft can land and take off and from where passengers and cargo can be transported.

The World Economic Forum’s Global Competitiveness Report 2017–2018 ranks Mexico 61st of 138 countries in the “Quality of air transport infrastructure” parameter. But the country ranked 21st in terms of passenger capacity with 2,330.2 million available airline seat kilometers per week. Although Mexico shows competitive airline capacity, the air transportation infrastructure of the country provides areas of opportunity for the country to reach its competitive potential.

Pablo Ramos, Director of Azul PR, says the Mexican aviation industry has evolved considerably in the past 20 years. He explains that every airport operates as a private company as airport groups manage operations and generate revenue, which has made airports much more efficient. “This has also helped aviation grow in the country; there are now more flights and more routes available, as well as more passengers per airport,” he says

As demand in the passenger and cargo services rises, so does the number of flight operations that take place in Mexico. According to data of DGAC, the Great Recession of 2008-2009 hit the Mexican aviation market. During these years, flight operations fell by 11 percent, transported passengers by 13.5 percent and air transported cargo by 12.3 percent. Almost 10 years later, the Mexican aviation industry has not only recovered and surpassed its pre-2008 levels, but is now growing at a relatively constant pace and this requires an expansion of airport infrastructure. 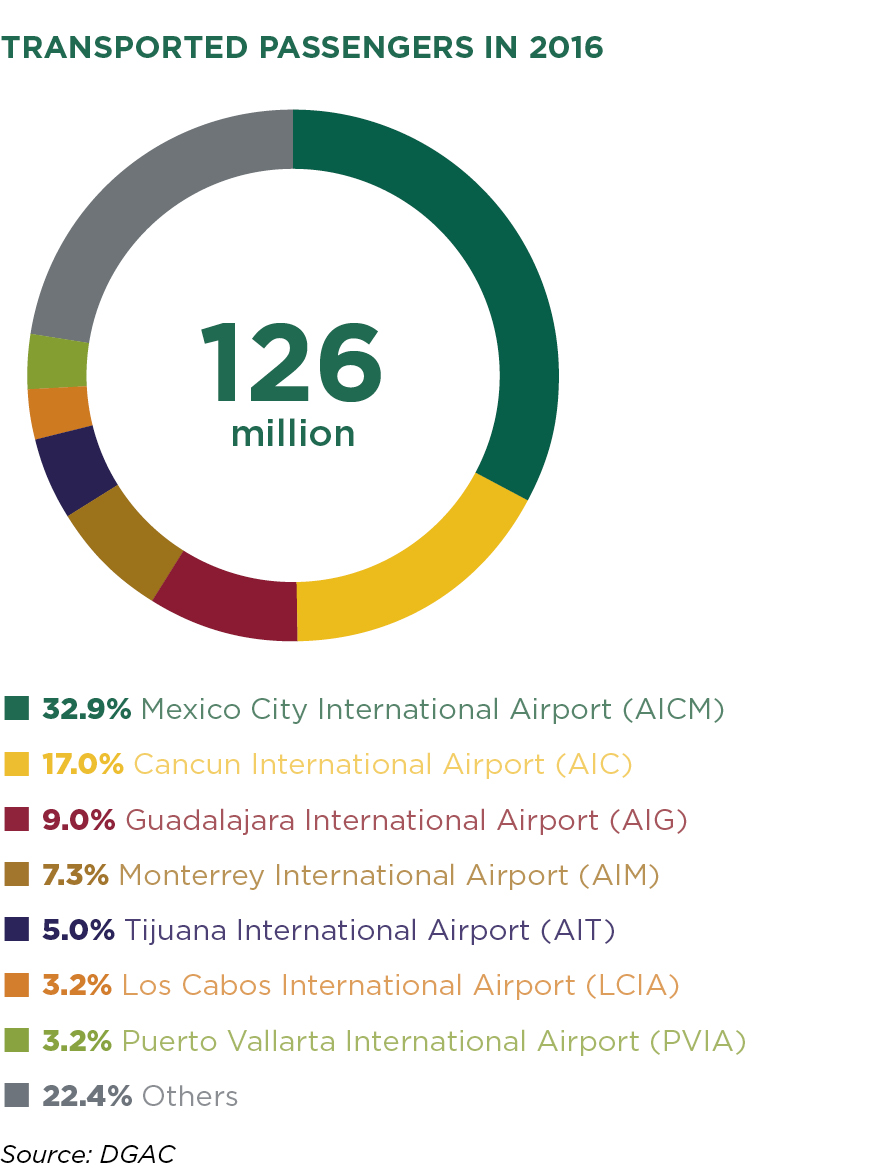 IATA expects that during 2017 demand in the passenger sector in Latin America will grow 7.5 percent, above the growth in capacity in the country, 6.7 percent. This lag in capacity growth is more than evident in Mexico, particularly in AICM. Virginia Gómez, Director General of air space navigation consulting company Prior Aero, identifies the fact that AICM is no longer operationally efficient as the main challenge for the aviation industry to overcome.

AICM, the country’s busiest airport in terms of operations, passengers and cargo has been saturated since 2014. And NAICM, one of the most important projects of the current presidential administration cannot arrive soon enough to cater to Mexico’s aviation needs and turn the country into a world-class logistics hub. “NAICM is … being heavily criticized but this new location and expansion is long overdue because airlines need more slots. They are under pressure to increase the number of flights to meet demand for air travel and cargo,” says Gómez.

In terms of total number of operations in 2016, AICM is the most important airport with 23.7 percent followed by Cancun International Airport (AIC) with 9.1 percent and Guadalajara (AIG) with 8.3 percent. 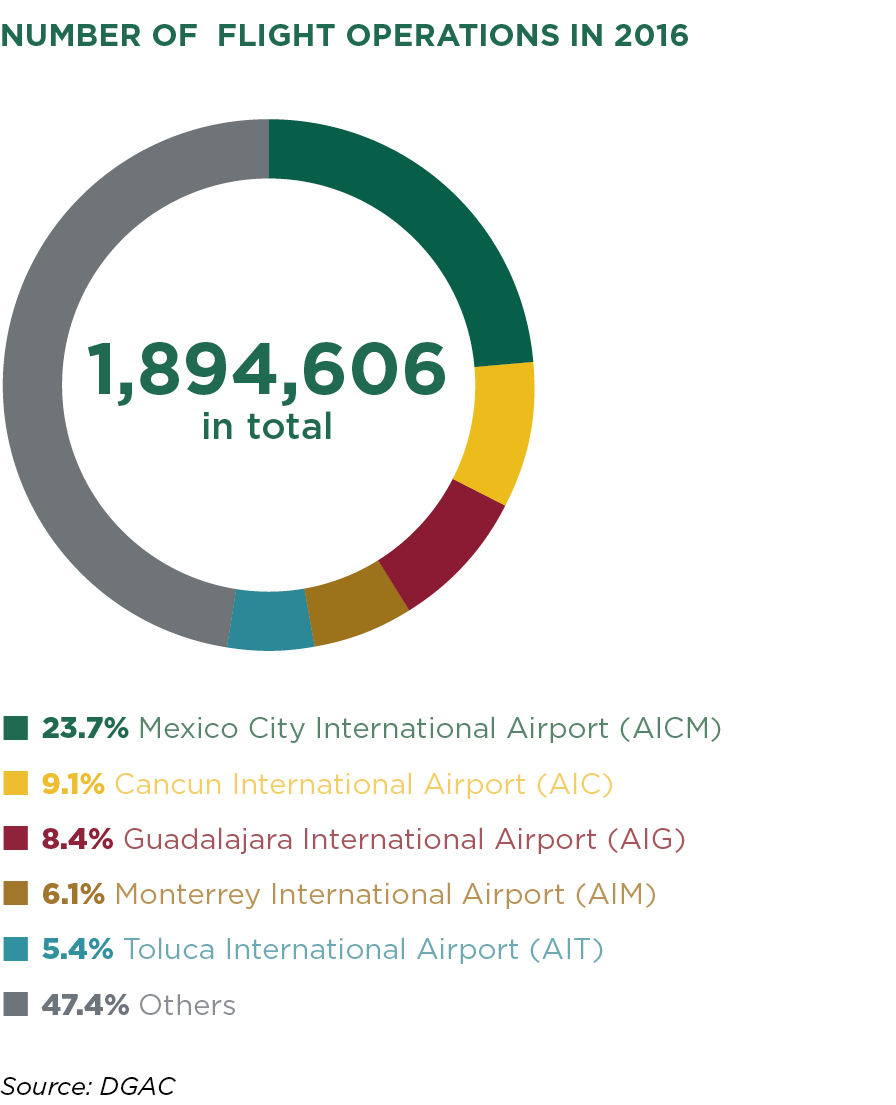 In terms of total passengers transported, AICM is again the clear winner. with 32.9 percent during this period, followed by AIC with 17.0 percent and AIG with 9.0 percent. Only in terms of international passengers was AICM left behind as 518,285 more people went through AIC than through AICM.

In terms of air cargo, in 2016 AICM was the most used airport with 55.4 percent of total tons, followed by AIG with 17.3 percent and Monterrey International Airport (AIM) at 5.5 percent. More than half of the air cargo transported went through AICM.

There is still a long way to go before the first plane takes off from NAICM’s airstrips. Until then, the saturation of AICM has opened the door for airlines to expand into other airports and provide direct flights that eliminate the need to go through AICM.

Rodrigo Vázquez, Director General of TAR Aerolíneas, a Queretaro-based commercial airline, believes that the location of the Queretaro Intercontinental Airport (AIQ) makes this airport ideal to become a true connectivity hub for the country. “Mexico City is an international entry point into the country and a connection gateway but it is now saturated. Queretaro can become an efficient connectivity hub by allowing passengers to change flights in just 20 minutes,” says Vázquez.

Meanwhile, Dirk Van Nieuwkerk, Director General Mexico and Central America of Lufthansa, says that while AICM has no more slots to offer, the Mexican government must ensure that it maintains its service level and that no budget cuts take place that could hinder airliner operations. “My hope is that NAICM will be a state-of-the-art facility with 24/7 operations and shorter connecting times for passengers,” he says.

All of Latin America has a role to play, says Cuitláhuac Gutiérrez, Country Manager of IATA Mexico. Countries in the region must work to modernize airport infrastructure to take advantage of the fast-growing regional aviation market. “Given operational, capacity and cost conditions, the region has the potential to double in the next 15 years but the areas that should be strengthened are airport infrastructure, slot regulation aligned to international best practices, technology that allows efficient processes and smart regulation,” he says.

While Mexico's airport capabilities are good enough for the existing aviation industry as the sector grows, airports will have to grow in turn to keep up.