The Dilemma of the Poached Employee

There is a significant talent gap in the aerospace industry, as more jobs are created than can be filled by the existing talent pool. This is leading to a growing problem: poaching of valuable employees. A similar problem is affecting aviation as pilots are leaving the country in seach of better wages

As Mexico’s aerospace sector maintains its rapid pace of growth, it is becoming increasingly difficult to meet industry’s stringent talent requirements. With supply and demand out of whack, poaching among companies for top human resources is a dilemma searching for a solution.

“One of the larger problems (aerospace) companies face is acquiring qualified professionals. As a result, there is strong competition for them, with some companies poaching employees from each other and offering inflated salaries that diminish competitiveness,” says Juan Carlos Corral, Director General of ITP Mexico and President of Queretaro Aerocluster.

Rather than ease demand, the government is taking steps to promote the creation of even more jobs. Among ProAéreo’s goals is the generation of 110,000 direct aerospace jobs. The sector, which has grown 15 percent annually, employs 50,000 individuals now, according to FEMIA. This suggests the problem could get worse before it gets better.

“Mexico faces a challenging situation in terms of (aerospace) human capital development and education. Almost 50 percent of all new graduates are not prepared to address the industry’s needs. As a result, people who know they have the right skills and training are always looking for the company that offers the best deal and the most attractive compensation plan,” says Gabriel Aparicio, Country Manager of Kelly Services.

Many institutions have incorporated curricula designed exclusively for the aerospace sector, such as Nuevo Leon Autonomous University (UANL), National Polytechnic Institute (IPN), Guaymas Technological University (UTG), Chihuahua Polytechnic University (UPC), Baja California Autonomous University (UABC) and Chihuahua Technological University (UTC). However, the most prominent example of the efforts to supply qualified personnel to the aerospace sector comes in the shape of UNAQ, the only Mexican university that focuses exclusively on the aerospace industry. This university was established as part of Queretaro’s commitment to encourage the Canadian company Bombardier Aerospace to establish operations in the state, explains Jorge Gutiérrez, the university’s Rector. “UNAQ was built to create the educational conditions that would capture the attention of important aerospace companies,” says Gutiérrez.

The greatest areas of need are those in specialized niches. “Within the aerospace sector, mechanics and electronics specializations are the most in demand, as well as professionals focused on industrial and aeronautics engineering. In this sector, quality is crucial, which means that candidates must be extremely responsible and dedicated to their job,” says Aparicio. While many universities are training the engineers of tomorrow, local aerospace companies seem more concerned with attracting — and retaining — technicians. “With more companies arriving in Mexico, demand for labor is on the rise but a lack of technicians has led companies to steal employees from each other,” says Richard Rubin, CEO and Co-owner of Javid LLC.

Training centers such as CONALEP are developing study programs to produce the technicians the industry requires. UNAQ also trains aerospace technicians. “Our goal is to develop the best workforce in Mexico, from technicians to engineers and researchers. We want to be a key player that develops competencies and supports the industry’s technological development,” says Gutiérrez. The university hosts 10 laboratories for aerodynamics, avionics, chemical treatments, electronics, material resistance, thermal machines and nondestructive testing and eight workshops for the study of engines, electricity and batteries, thermal processes and welding and metrology. By 2016, the university had trained over 7,000 technicians and generated almost 1,000 associate bachelor’s and master’s degrees.

Training the necessary personnel might be a challenge, the end result is a potential powerhouse for the Mexican economy. “During the next two decades, global demand will require over 37,000 new aircraft. Mexico has a 10-year window of opportunity to fully enter the aerospace global value chain. If we do not create a foundation to support local industry, we might miss it,” says Gutiérrez.

While many companies see Mexico as a low-cost labor market, others see much more potential, for instance in the generation of R&D. According to ProMéxico, there are 11 research centers across the country with aerospace capabilities.

Local universities and research centers are also investing in technology “Alongside SEDENA, UNAQ is developing technology for unmanned aerial vehicles (UAV) and composite-based materials to shield helicopters. UNAQ has also developed simulators for pilot training alongside the Mexican Air Force and is developing tooling and other capabilities for manufacturers of landing gears and engines. The university, with financing from the Mexican Space Agency (AEM), also participates in research of nano, micro and pico satellites, launchers and embedded systems design for navigation,” says Gutiérrez.

Research centers, such as CIDETEQ and CIDESI, are developing projects for the sector. Yet, all these efforts might not be enough, unless the private sector takes a greater role. “While some projects can take a short time, true innovation takes years and years. Furthermore, Mexico needs greater research participation from private institutions. In most developed countries, 70 percent of research is funded by private institutions and the rest by the government. In Mexico, it is the other way around,” says Gabriel Siade, Director General of CIDETEQ. While the current presidential administration mandated that 1 percent of GDP should go toward research, in 2016 the country invested only 0.57 percent.

Efforts to power Mexican aerospace R&D remain on the front burner, which can be seen in the generation of a research center focused exclusively on the aerospace industry. “Located in Queretaro, the National Center of Aeronautics Technologies (CENTA) will operate as a consortium integrated with eight centers with complementary capabilities, enabling access to more than 70 collaborating laboratories across the country and to qualified personnel and equipment for any program. CENTA began operations in July 2017 but its official inauguration will be in late November 2017, after new equipment is incorporated,” says Felipe Rubio, Leader of the CENTA project.

WHERE ARE THE PILOTS?

Demand for pilots is already high. Boeing explains that some regions have relied heavily on recruiting foreign pilots. The Mexican Association of Aviation Pilots (ASPA) estimates that every year 300 pilots leave Mexico looking for better wages in Asia and the Middle East. Pilots are ready to move as they can aspire to salaries ranging from US$12,000 to US$16,000 per month outside of Mexico, while in the country the average monthly salary is MX$21,296 (US$1,149). Furthermore, the association says that Mexico does have the capabilities to train the increasing demand for pilots as the costs of training are too expensive, up to MX$1 million (US$50,000) for a twoyear program.

Mexico has hundreds of pilot schools but training is a slow process and it is not keeping up with industry demand, explains Victor Hernández, Director General and CEO of ASTECA, a Mexican school for pilots, operators and flight attendants. He further explains that while the largest school in Mexico trains about 200 students every six months, most train only four to six pilots during that period. 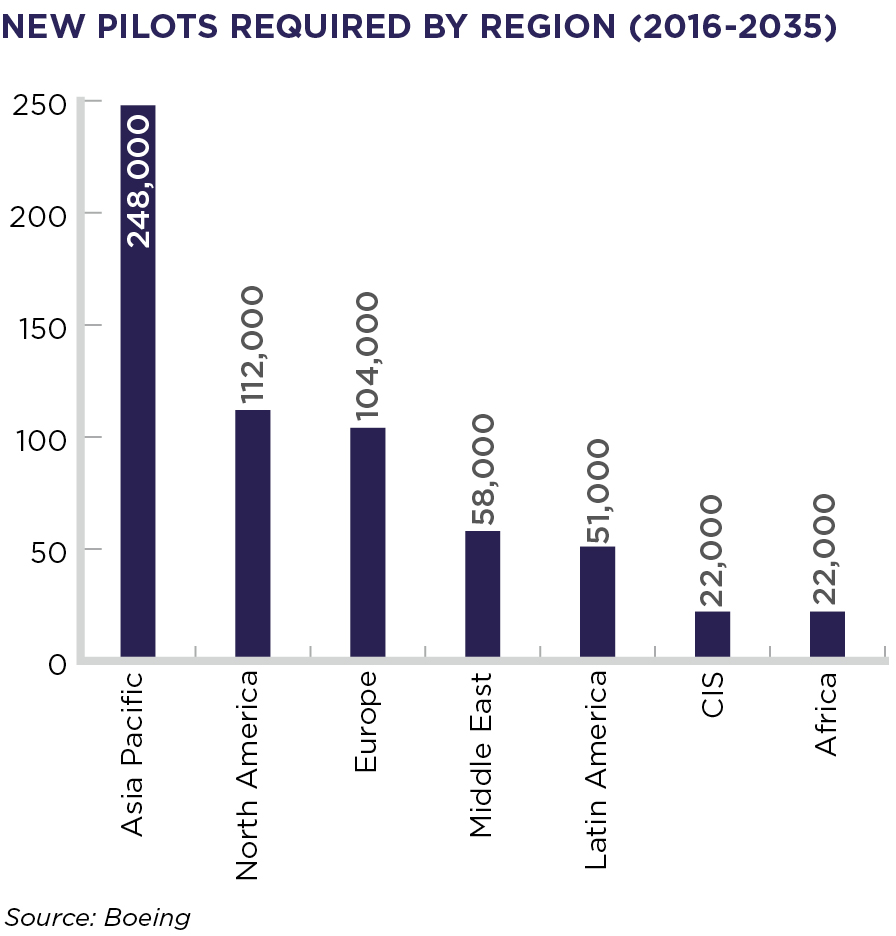 The aviation industry is cyclical and the current growth period is expected to continue until 2020. “Pilot demand will continue until that year,” says Hernández. “Our only concern is that the rate at which they are being produced may lower standards. Approximately 30 percent of licensed pilots are rejected by airlines because they are unable to pass the recruitment tests.”

The lack of pilots will eventually become a problem, which some are already taking steps to address. For instance, UNAQ is planning to launch a Pilot College to address the demand. This comes right after the university launched a training program for flight attendants, who are also in high demand. The proposal for the Pilot College will be presented to local authorities in 2018, with a launch date of 2019.