The Higher Education Offer for the Aerospace Sector in Figures

The 31 higher education institutions that have joined forces on the development of the Strategic Aeronautical and Space Agenda of Higher Education Institutions 2030 (The Agenda) have unveiled their first deliverables.

The first step in the workplan for the more than 65 academics, researchers and executives who developed The Agenda is to carry out a diagnosis and radiography of the aerospace sector in Mexico. This step included determining and forecasting the medium- and long-term needs of this sector considering the scenario of the pandemic.

The second step is to prepare an inventory of the offerings at the higher education institutions in Mexico with educational programs specialized in the aerospace sector, which also involves generating a map of the location of these institutions throughout Mexico as well as listing their capacities (facilities, equipment, academic staff, researchers) to analyze their strengths and weaknesses.

Once we have these two perspectives really clear, it will be possible to contrast them to determine high-impact strategic projects, according to the regional and national scenarios, whose deployment will be under the charge of the triple helix (government, academia and industry), with the objective of closing the breach between what is desirable and the current reality. This action will reinforce these higher education institutions so they can become the generators of human capital specialized in aerospace competences that the growth of the aerospace sector demands in the medium and long term.

In this article we will focus on describing the composition of the aerospace educational offer and institutions map at the higher education level in our country.

The map of educational institutions that offer aerospace programs consists of 38 private and public universities, technological institutes, schools and training centers, located in 14 states, with a majority concentration (75 percent) is in the northwest and central regions.

The states with the most campuses are: Mexico State, with eight campuses, followed by Sonora with seven. See the following table and figure 1: 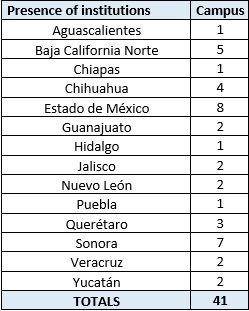 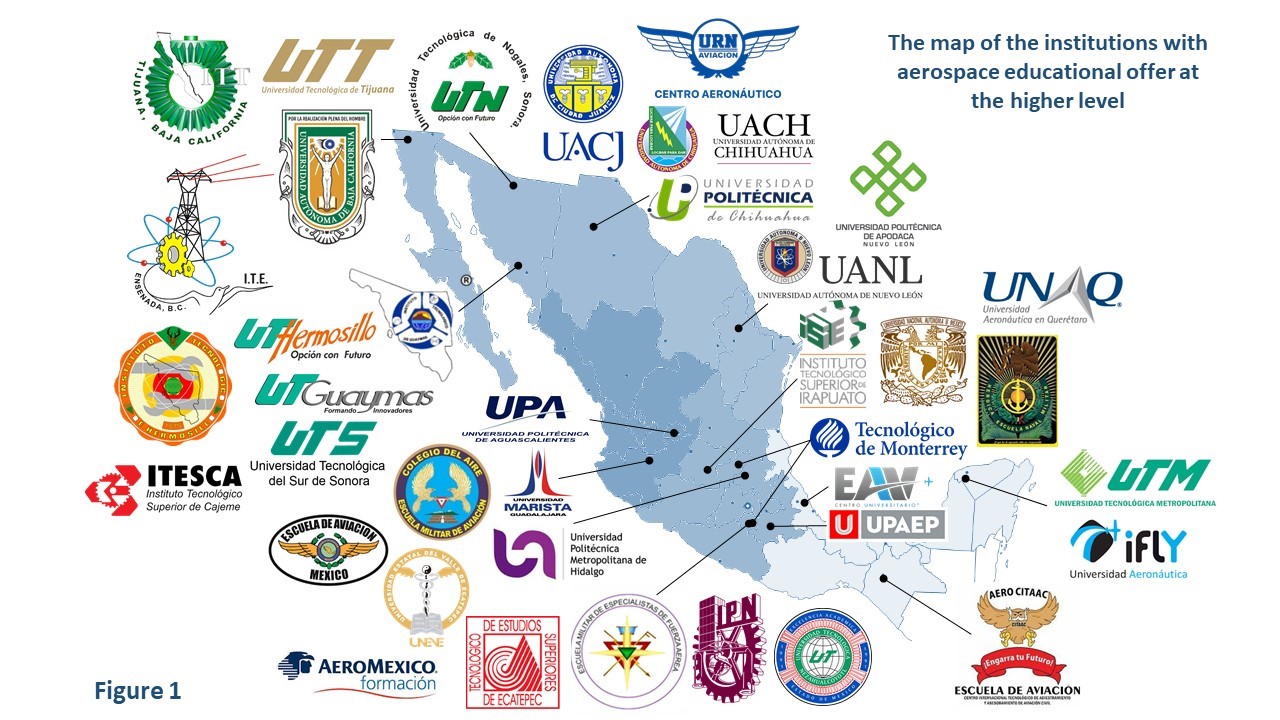 Inventory of the Aerospace Educational Offer

The aerospace educational offer in Mexico consists of the following levels, listed from the lowest to the highest educational level: 1) Associate level college programs, which are programs that last two years, 70 percent practical (these programs in Mexico are called Técnico Superior Universitario or TSU). 2) Engineering and bachelor’s degrees, including terminal areas (concentration areas) lasting between three-and-half and five years. 3) Specialties, which are programs with a duration of one and a half years aimed at professionals with an engineering or bachelor’s degree in aerospace or other related fields of knowledge. 4) Master’s degrees, with an average of two years and finally; 5) Doctorates that last between two and three years.

There is a total of 25 different aerospace programs at the higher educational level, offered 61 times by 38 different institutions at 41 campuses across Mexico (see the table below and the table, Specialized aerospace educational offer).

With an offer of eight educational programs in the levels of associate level college, engineering, specialty and master's degree, the Aeronautical University in Queretaro heads the list, followed by the Autonomous University of Nuevo Leon, the National Polytechnic Institute and the University Center for Aeronautical Studies of Veracruz, all of which offer three programs. From these last three, the National Polytechnic Institute is the only one that has two master's degrees and the Autonomous University of Nuevo Leon offers the only doctorate program in Mexico.

It is also relevant to analyze the educational programs available considering the sub-industry to which they are directed: manufacturing, engineering services, MRO (maintenance, repair and overhaul), aeronautical operations and those called “transversal” (those that have an application in any of these sub-industries). Mexico's manufacturing vocation is supported by the educational offer aimed at these industries: 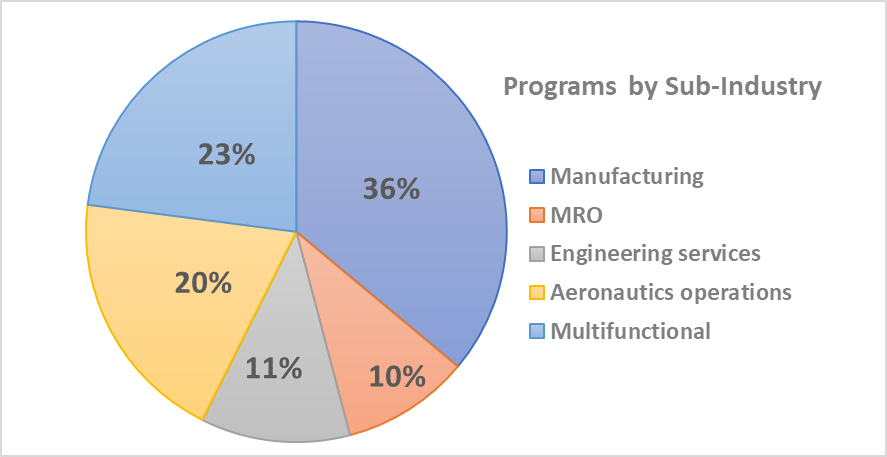 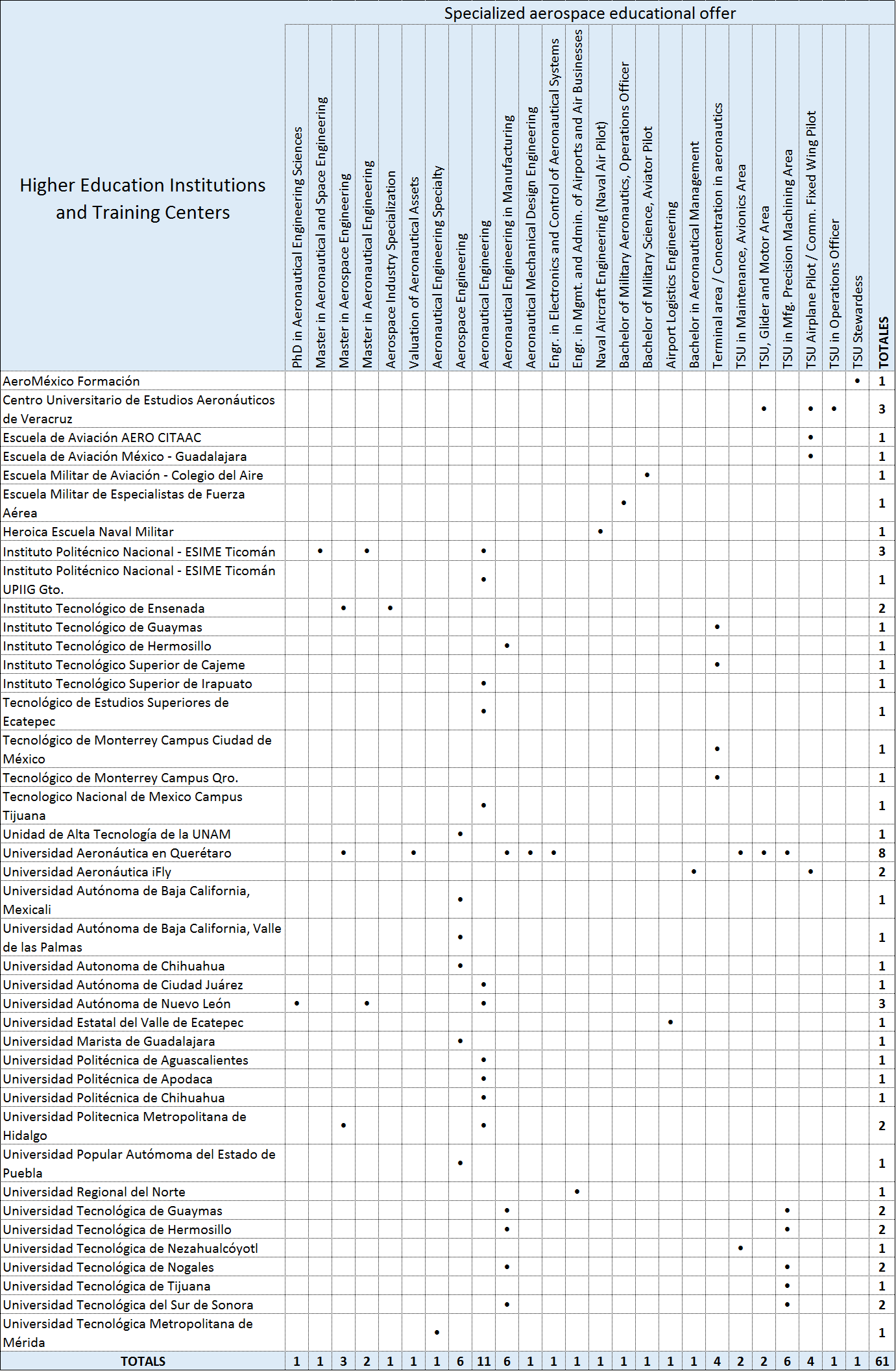 The data speaks for itself: Mexico has a predominantly manufacturing vocation and the efforts to educate professionals for this sub-industry are supported by the figures: 36 percent of educational programs at all levels are designed for manufacturing.

This figure contrasts with the offer aimed at other sub-industries, such as MRO with only 10 percent or engineering services with 11 percent, which speaks to the need to develop an educational offer for sub-industries other than the manufacturing sub-industry.

Equally relevant is the need that Mexico has for engineering graduates and for those at the undergraduate level to continue to a postgraduate degree; but at this time the educational offer of specialized postgraduate courses does not have this capacity, since only 16 percent of the total consist of these kinds of programs.

The development work of The Agenda continues, and although these are preliminary results, they give us a clear idea of the conformation of the higher education offer for this key sector for Mexico.