The Message Behind the Creation of the Strategic Agenda 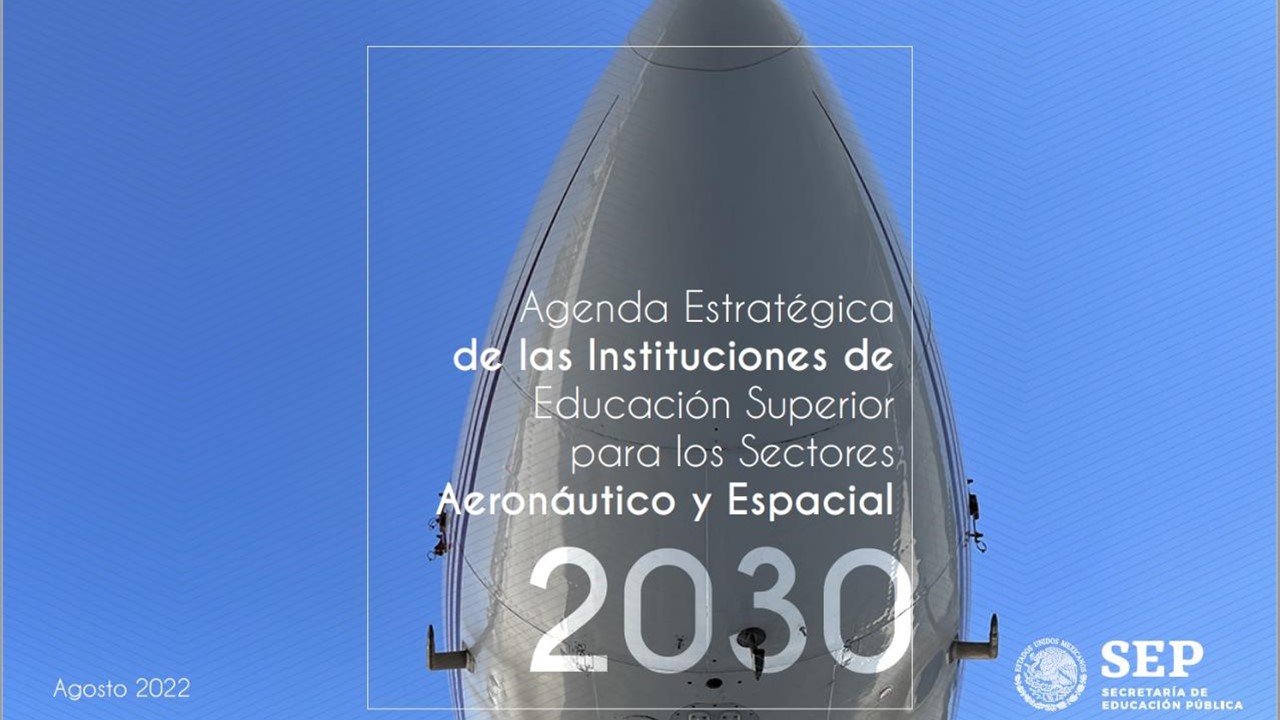 Strategic documents seek to serve as an orientation, sometimes more as a road map, for the deployment of projects that intend to transform the reality of organizations and governments  and further transcend their setting, and achieve more ambitious goals and a better position in their markets or within the economies in which they operate, where they coexist with multinational organizations and countries that are extremely competitive on a global scale.

The project to create the Strategic Agenda of Higher Education Institutions for the Aeronautical and Space Sectors 2030 (the Strategic Agenda), which consisted, in summary, of analyzing the current and future state of the national and international aeronautical and space sectors in terms of its technological trends and training needs over time, and contrast it with the current and future state of Higher Education Institutions (HEIs), in terms of capabilities and specificity, to understand and meet the demands for training and services that these industries will demand toward the end of this decade, also leaves a great lesson and with it a message perhaps even more powerful than just figures, projects and strategies.

That is, for the first time in the history of higher education in our country, 31 universities and technological institutes gathered their intellectual capital and worked through more than 120 plenary and coordination meetings, which accumulated more than 730 days of work among 71 experts from institutions of different public and private higher education subsystems, including large national institutions, such as the National Polytechnic Institute, the National Autonomous University of Mexico and the Monterrey Technological Institute, which allowed integration of the document and the results of this initiative that was born prior to one of the most difficult times in our country, the pandemic, and that survived until its conclusion.

Thus, on Aug.  5 , the initiative was presented at a national event, with the participation of key players in higher education in Mexico at the facilities of the Aeronautical University in Querétaro (UNAQ), which led the creation of the Strategic Agenda for more than two years, and that, within the framework of this event, symbolically handed over this leadership to the Mexican Council of Aerospace Education C.A. (COMEA) for its implementation, monitoring and future updating.

COMEA will face the challenge of increasing its impact, incorporating into its scope upper secondary education institutions and the Armed Forces, among others, as well as promoting its deployment in co-responsibility with the government, industry and academia, emphasizing the convenience that the project of the Strategic Agenda is led by the Deputy Minister of Higher Education and the Minister of Economy, as major players with the ability to influence public policies with powerful projects.

This is the reason why, this time, I wish to highlight a different perspective of the effort, dedication and discipline that these institutions and their leaders contributed, taking advantage of their experience and trajectory and that, regardless of whether they were large or small, they coordinated together to generate a more powerful result than one they could have developed largely alone: the creation of the Strategic Agenda.

The exercise of creating the Strategic Agenda was, by itself, a wide-ranging project that required the deployment of world-class project management techniques, including coordinating more than 70 academics, executives and researchers located in places as distant as Merida in the south and Mexicali in the north, and getting them not only to reach agreements but also to carry out research that generated real deliverables that later became chapters of the document. This was, without a doubt, not only an exercise of discipline and management at the highest level but, also, evidence of maintaining an unbreakable spirit to "make things happen."

I want to mention just some of the strategies that were key success factors of this project, which were implemented by the project management team of the Aeronautical University in Querétaro, whom I had the honor of leading and motivating so that they endorsed the vision of developing projects of national impact, with a great projection for Queretaro and for the benefit of all Mexico:

Thus, as we can see, the initiative was not only an exercise in introspective and prospective reflection for these specific sectors, it also made it possible to demonstrate what our country greatly lacks: teamwork. The initiative demonstrated that one plus one, when working together, is much more than their sum. It also exhibited the potential that we have as a country if we propose to put aside egos, misunderstood regionality, opportunism and all those practices and behaviors that, unfortunately, are present in many of the initiatives that strive to create change or that seek the much-used and distorted common good.

Provoking exercises where a variety of institutions with a common purpose sit at the same table is a triumph per se; integrating collective intelligence to promote the coordinated development of the sectors and the educational institutions linked to them is the great challenge. It will be up to COMEA to honor the efforts of all these leaders and gradually implement strategies and projects to keep alive the message behind the Strategic Agenda: Collaboration helps us grow together and, above all, fly higher.

(The final document of the Strategic Agenda of Higher Education Institutions for the Aeronautical and Space Sectors 2030 is available in the following link: https://www.unaq.edu.mx/Agenda_Estrategica_de_la_IEAE_2030_D.pdf)