The Big Three are not so big anymore in Mexico. With the exception of GM, which has managed to maintain its market share, US OEMs have lost ground against Japanese companies and Korean newcomers. Their growth projections do not seem much more favorable

They were the trailblazers. Ford, GM and FCA, the Big Three, first entered the Mexican market in the 1930s and were instrumental in building the manufacturing dynamo that Mexico is today. As new OEMs arrived with their brands in tow, the American giants have had to battle for every sale. All three retain significant market share – 6 percent (Ford), 19 percent (GM) and 6 percent (FCA), according to AMIA figures for 2016 – but Japanese and Korean brands are growing in popularity and altering the landscape.

Between 2010 and 2016 the Mexican market practically doubled, moving to 1.6 million units from the 834,024 vehicles sold in 2010. But only GM has held its share. In 2010, Ford, GM and FCA enjoyed 10 percent, 19 percent and 9 percent of the market, respectively. Brands like Toyota and Mazda are gradually gaining ground and the early numbers from January to July 2017 provided by AMIA show Kia and Hyundai as other strong competitors with shares of 6 percent and 3 percent respectively. The Big Three have been unable to extend their share in the face of tougher competition but neither are they losing much ground, showing their resilience. In the same period, they posted a market share of 5 percent (Ford), 17 percent (GM) and 7 percent (FCA).

A strong customer-oriented approach and a focus on aftersales has helped relative newcomers like Kia and Hyundai make inroads. “Some more established OEMs struggle to renew their operations and keep using certain bad practices, which ends up affecting their sales,” says Juan Manuel Díaz de León, Automotive Practice Director of Overlap Consulting Mexico. “Meanwhile, new OEMs have a clean slate with regards to service and reputation, which could work to their advantage.”

However, word-of-mouth remains as important as ever to create a good reputation and even more so when the development of social media and its role in marketing are considered. Unfortunately for the American OEMs, the buzz surrounding them has been less than favorable since the second half of 2016.

After US presidential candidate Donald Trump threatened OEMs that manufacture vehicles in Mexico with exportrelated tariffs and then continued his assault into his presidency, Mexicans reacted.

The first victim was Ford. Already taking heavy fire from Trump’s official Twitter proclamations, the company dropped its own bomb onto the Mexican market. After announcing in early 2016 a US$1.5 billion investment for a new plant in San Luis Potosi, the company went back on its word and in January 2017 declared that the project was officially canceled. According to a statement issued by Mark Fields, CEO of Ford Motor Company, the decision had nothing to do with Trump’s threats of imposing a 35 percent border tax on Mexican imports. He also said that the production intended for San Luis Potosi would move to the existing plant in Hermosillo. However, the damage was done. 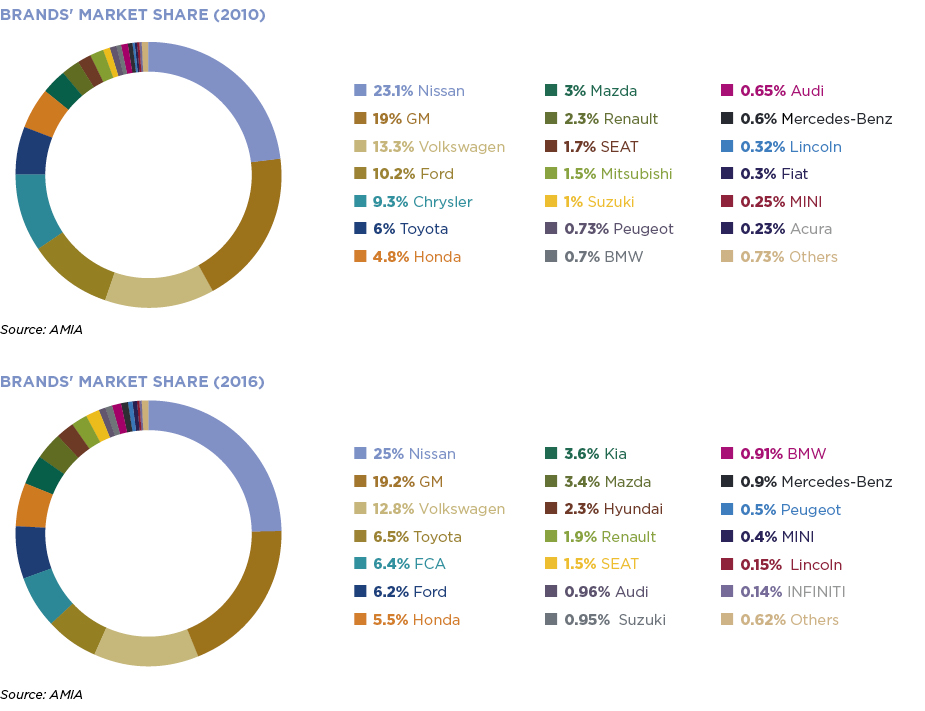 The announcement brought anger from Mexican consumers, leading to drops in sales and the cancellation of contracts from Mexican fleets. “Ford took a hit mainly because of negative media attention around its plant construction’s cancellation in San Luis Potosi,” says Carlos López de Nava, Director General of Grupo Alden. “Many clients canceled their orders and the brand was criticized on social media. Nationalism and protectionism are returning to influential economies and Mexico experienced this in its own way.”

Among the companies cutting ties with Ford were construction company Coconal and tourism company Grupo Experiencias Xcaret, both of which sent letters to the automaker’s distributors canceling further vehicle acquisitions.

Ford has also been decreasing its production volumes in Mexico since 2014. Furthermore, after canceling the San Luis Potosi project, the company announced that the vehicles that were to be manufactured in Hermosillo would now move to China. According to Joe Hinrichs, President of Global Operations at Ford Motor Company, the shift will save the company US$1 billion compared to its original production plan focused on San Luis Potosi.

Sales at GM have also taken a hit, although the company has kept a lower profile regarding Trump’s proclamations. AMIA reports that sales of the brand fell by 10.5 percent between January and July, totaling 142,943 units sold compared to the 159,733 in 2016. In contrast, the company grew 20.6 percent in 2016 with total sales of 308,624 vehicles.

FCA, too, reacted to the new uncertainties pock-marking the landscape. Sergio Marchionne, CEO of the company, issued his own statement saying that in the event of a border tax, FCA was ready to pull its production activities out of Mexico and take them back to the US. “The repatriation of the Ram heavy-duty truck is possible,” says Marchionne. “The infrastructure to execute that is in place and, given the right motivation, it could be accomplished quite easily.” Unlike Ford and GM, the brand has grown 4.9 percent in the first seven months of the year, compared to 2016.

Although conditions have not been the most favorable for American OEMs in Mexico, the domestic market’s growth still presents a recovery opportunity for them. “Despite uncertainty created by US President Trump’s comments and potential changes in his country’s relationship with Mexico, there is still high demand,” says López de Nava.