The Mexican Automotive Industry Association (AMIA) was established in 1951 by international industry heavyweights to represent the interests of the country’s automotive producers. Its current Executive President, Eduardo Solís, points out that Mexico is not a latecomer to the international stage: “Mexico began looking outwards in the late 1980s, and this can be seen through the rise of the automotive sector.” Of course it was NAFTA’s establishment in 1994, opening up Mexico’s economy and accelerating the growth of the country’s already solid automotive industry that really saw the sector explode. AMIA’s data shows that Mexico has gone from producing 505,202 cars in 1988 to 2,933,455 in 2013. “Many people think of Mexico’s economy as baed on maquiladoras. Not many people know that we are actually exporting more than we import. Last year we imported US$10.4 billion worth of automotive goods and we exported almost US$23.5billion worth. That is not evidence of a maquiladora industry but of a real value added sector,” says Solís. AMIA expects Mexico’s annual light vehicle production to reach four million by 2017, based on investments that have already been announced.

In the first six months of 2014, Mexico’s vehicle production surpassed Brazil’s due to a 16.8% drop in the South American heavyweight’s output, and an 8% increase in Mexico’s production. “In 2013, Brazil produced almost 500,000 more vehicles than Mexico, but this year already, Mexico has produced almost 300,000 more vehicles than Brazil,” explains Solís. Despite using Brazil as a comparison to the Mexican market, Solís points out that the challenges facing both countries vary hugely, with Brazil exporting just 5% of its production compared to Mexico’s 80%. Mexico looks set to continue as a major global exporter, with recent figures showing that the country is now positioned as the fourth largest auto exporter in the world. Last year, Mexico exported a record number of 2,423,084 locally manufactured light vehicles, of which 68% went to the US, supporting expert conclusions that the recovery of the US market has been largely responsible for Mexico’s growing export levels. “From January to June this year, Mexican exports to the US market increased by 16.5% while Japanese exports grew 3.5%, which means that Mexican exports grew over four times as fast as Japan.” As a result, Mexico overtook Japan in early 2014 as the second-largest automotive exporter to the US, with some experts predicting it will become the number one exporter as early as next year.

Car assemblers and auto parts manufacturers hit production and sales records in 2013, which are only likely to keep climbing and further investment announcements have continued throughout 2014. “The recent investment announcements by luxury OEMs like Audi, Mercedes-Benz, Nissan Infiniti, and BMW change the face of Mexico as a vehicle manufacturer and give the country tremendous credentials to continue its growth,” asserts Solís. A look at Mexico’s trade surplus and deficit levels shed further illumination on the growing importance of the automotive sector for the country’s entire economy. Solís explains that the automotive industry currently has a yearly trade surplus of almost US$39 billion, and in the period from January to April of 2014, that surplus grew by 16.9%. “By April 2013, we had an $11.3 billion surplus, which increased to a US$13.2 billion surplus by April 2014. That gives you a sense of the success of the industry and is testament to the value added contribution Mexico is making,” says Solís. Indeed the entire Mexican manufacturing industry had a deficit of US$3.9 billion last year, while the Mexican economy itself had a US$2 billion deficit.

Despite positive production figures, the Mexican internal market has not exactly followed suit. Last year, new car sales in the country rose 7.7% to 1.06 million, matching the levels of 2004. Only around half of domestic automotive sales in Mexico involved cars made in the country, with the rest being imported. Despite the domestic light vehicle market growing steadily since 2009, it has nonetheless taken a full decade for sales to return to previously seen levels. “Reactivating and deploying the domestic market is really the number one concern of AMIA right now, and that is the dark side of the industry. Sales might have grown in 2013, but mid-point into 2014, sales are actually 0.3% lower than this time last year and overall current sales match those of a decade ago. This constitutes a lost decade for the Mexican domestic market,” says Solís, who believes that domestic sales should be at 2 million units, but many obstacles need to be overcome before such potential can be realized. 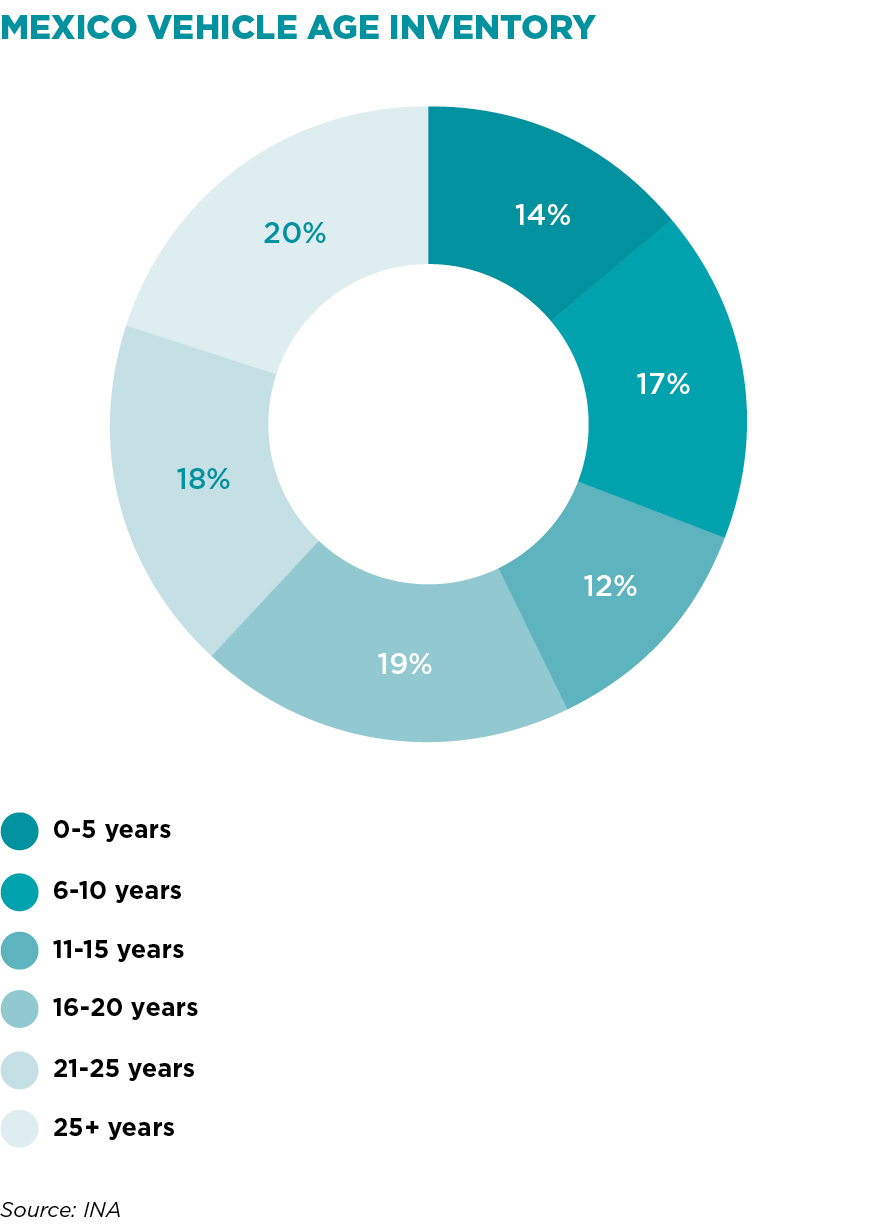 A major obstacle to revitalizing the domestic industry is the constant influx of used cars from the US. According to a study conducted between A.T. Kearney and AMIA analyzing key constraints to Mexico’s automotive industry growth, the excess inflow of used vehicles from the US is the main barrier. Stricter regulation is key, Solís explains. “The government will play a big role in whether or not the Mexican automotive industry will grow. If the right operating environment is put in place alongside Mexico’s automotive experience and its competitive advantages, the possibilities are tremendous.” A second barrier is the current availability, or lack thereof, of financing in the Mexican market. Solís explains that 50% of vehicles sold in Mexico are financed, but he states this figure should be closer to 70%. “We have the opportunity for growth, but it is not happening because Mexican law helps the borrower more than the lender. For example, if a person stops making their car loan repayments in Mexico, it can take a lender up to three years to recover their vehicle. By contrast, in the US, if a person stops paying, a vehicle will be repossessed a week later,” says Solís. During the time it can take a lender to recover a vehicle, the value has usually depreciated substantially. AMIA studies point to about 200,000 to 250,000 missed loan opportunities due to the level of perceived risk involved, but Solís is hopeful that the country’s Financial Reform will go some way to addressing the problem. However, until both the used car inflow and the access to finance issues are resolved, Mexico’s internal market will continue to underperform, he warns. “Brazil has higher interest rates and taxes, and yet they sell 19 vehicles per 1,000 inhabitants while we sell nine. We have similar per capita incomes, so there should not be such a big difference,” explains Solís. The clear constraints on the internal market do not mean that opportunities do not exist however. Solís explains that Hyundai is the newest member of AMIA, having recently made the move to Mexico. “Hyundai is coming to sell vehicles in Mexico with a modest view of what it can achieve, but the possibilities are interesting enough. The Hyundai niche represents about 3%, which is what Chrysler has already been selling for Hyundai, and the company expects to be able to increase that a little to a 5-6% market share,” says Solís.

According to AMIA, Mexico’s future lies in its potential to scale up the automotive production value chain and become a center for R&D development. Solís points out that the automotive industry is the single most important sector for CONACYT. US engineers are an average of 55 years old today, while their Mexican counterparts are 27 years old. In five years, 20% of US engineers are going to retire. “This will lead to a tremendous move of engineering centers to Mexico, and with the 100,000 engineers graduating here yearly, we have a huge opportunity,” concludes Solís. 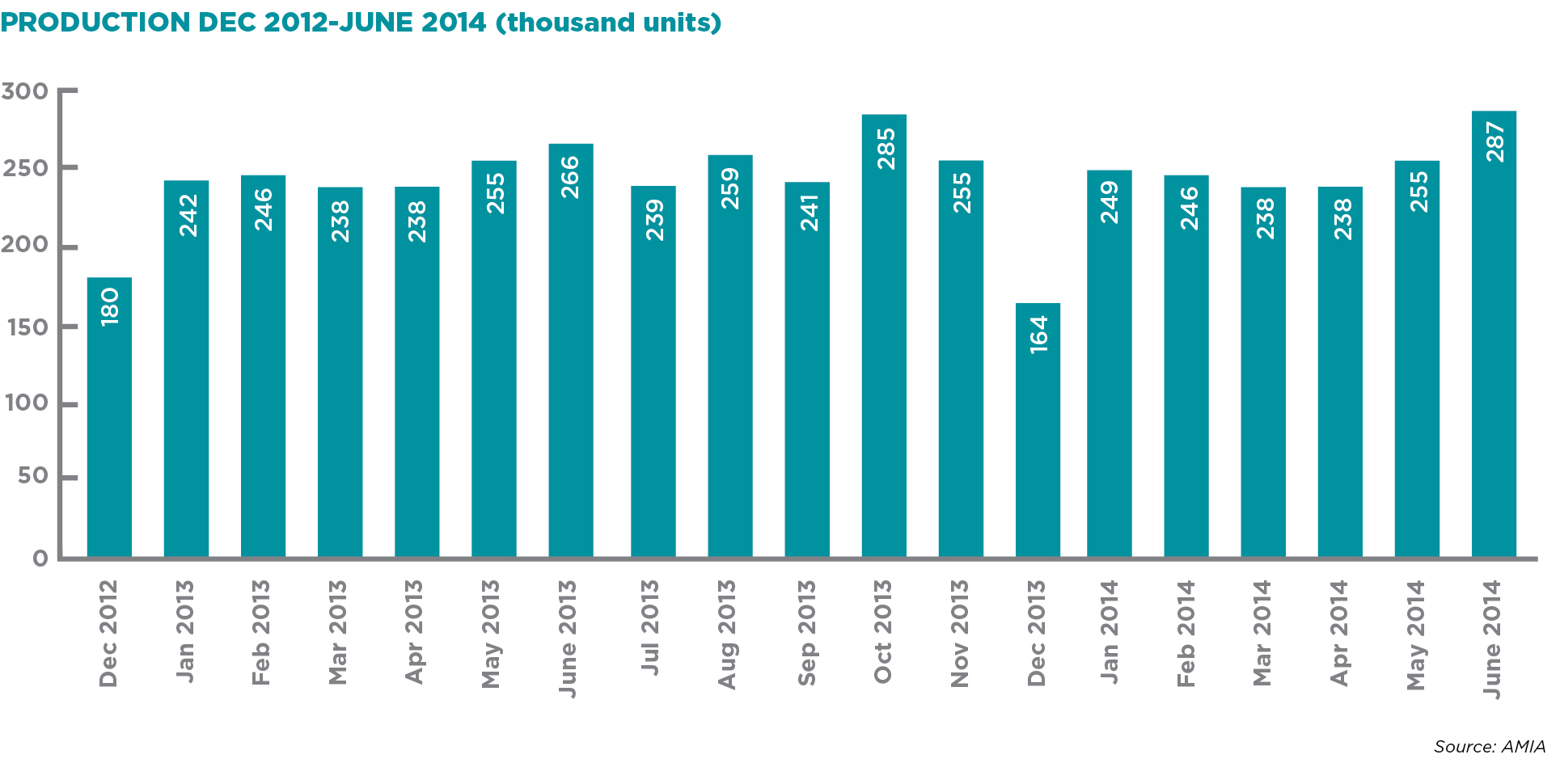