Q: While the production of vehicles in Mexico advances to 4 million units, the production growth of auto parts has been slower. What are the main reasons for this difference?

A: Mexican auto parts production does not grow at the same rate as vehicle production, mainly because the new OEM manufacturing plants are already facing many variables that may threaten their overall success, such as new facilities, new suppliers, labor, and all the pitfalls that come with operating in a new country. This explains why they prefer to use a large proportion of components that are imported from their home countries, at least for the first generation of automobiles. Once vehicle production advances, more auto parts from local suppliers are introduced. It is expected that between 2013 and 2020, the automotive industry will grow by 50%, with auto parts production increasing by 30-35%.

Q: What are INA’s strategies to encourage OEMs to use local suppliers?

A: It is important to present Mexico’s manufacturing capabilities to OEMs entering the country, since they do not yet perceive Mexico as solid ground in terms of component production, despite the fact that we are the fifth largest auto parts producer internationally. Essentially, INA has to promote the quality of Mexican production. OEMs that have been in the country for 50 years have strategic local suppliers, and they are producing their cars with Mexican auto parts. Currently, the challenge is to increase the proportion of local auto parts used by new market entrants like Mazda, Honda, KIA, BMW, and Mercedes-Benz. INA organizes 15 events a year to meet with the purchasing directors of each OEM and learn about their purchasing and supplier development strategies for Mexico. Normally, the sourcing decisions are centralized, which means that the supplier designation is not made in Mexico but in Germany, Japan, or the US. We therefore invite the company directors from these countries to give them firsthand experience with Mexican quality products. The crucial factor for foreign OEMs is the availability of engineers in Mexico. Globally, young people are no longer interested in pursuing a career in engineering, and prestigious automotive companies have lost their technological appeal, except when it comes to communication technologies. However, in countries like China, India, Mexico, and Brazil, automobile manufacturing is still an engaging career path, and automotive corporations are more accessible than other industries.

Q: In the case of Mercedes-Benz, which will be sharing production with Nissan, do you expect it to use local suppliers like Nissan or import its own auto parts?

A: Mercedes-Benz already manufactures buses and trucks in the country, but this production is very different from the vehicles fabricated in the Nissan plant. For this reason, there is a high probability that Mercedes-Benz will use strategic suppliers from its home country. The first generation of vehicles will be closely watched by Stuttgart and Tokyo to ensure the quality and status of the Mercedes-Benz brand. For the second generation, or even for half of the first, Mercedes-Benz may start to consider national suppliers. There is no problem with sourcing Mexican auto parts in the luxury segment, given that 60% of them are already exported to the US for manufacturers like Mercedes-Benz, BMW, Cadillac, and Lincoln. Many Mexican auto parts are already used in premium automobiles, but the difference is that now they will be assembled in Mexico.

Q: How does INA work with the government to both support the development of Mexican manufacturers and attract international companies?

A: INA is working alongside the Mexican government to help suppliers develop while offering them support, especially those that are not ISO, TS, or VDA certified. By doing this, we intend to incorporate them into the OEMs and instruct them on processes like molding and injection. The Ministry of Economy is promoting such projects through the National Institute of Entrepreneurship (INADEM), and its main focus is the growth and certification of Mexican companies. In the last three years, 150 corporations have received instruction and certification by the Automotive Industry Action Group (AIAG), which certifies many North American companies. INA offers economic aid for up to 50% of the cost of these processes. We are also working with ProMéxico to attract foreign investment since not all the products that are imported can be produced in Mexico. If we want to use local products, we need to attract companies that specialize in certain types of technology.

Q: What has led automotive companies to migrate from the North Region to the Bajio?

A: Ten years ago, 85% of the vehicles produced in Mexico went to the US, which is why manufacturing plants were being established in the north, further capitalizing on the region’s logistical advantages. Now the percentage has dropped to 65%, and automobiles are increasingly shipped by sea to Europe and South America, through ports like Veracruz, Altamira, and Lazaro Cardenas, which are closer to the Bajio region. Auto parts, on the other hand, travel by truck and train, making it possible to export 95% of the production to the US and Canada. However, assemblers in the Bajio need to have their suppliers close by in order to reduce costs.

Q: As executive president of INA, what are your ambitions until the end of your term?

A: Our main objective is to develop more effective public strategies and create opportunities for the automotive industry. There needs to be an entity that can motivate the government to focus on the need for roads, ports, security, and education, making Mexico a more attractive place for foreign investment. This is the goal that INA, along with AMIA, ANPACT, and AMDA, is striving for. We need to make sure that the government seizes this opportunity by demonstrating the benefits that the automotive industry can bring to the country in terms of technology, economy, and development, as well as the possible areas of improvement to both Mexican industry and the internal market. 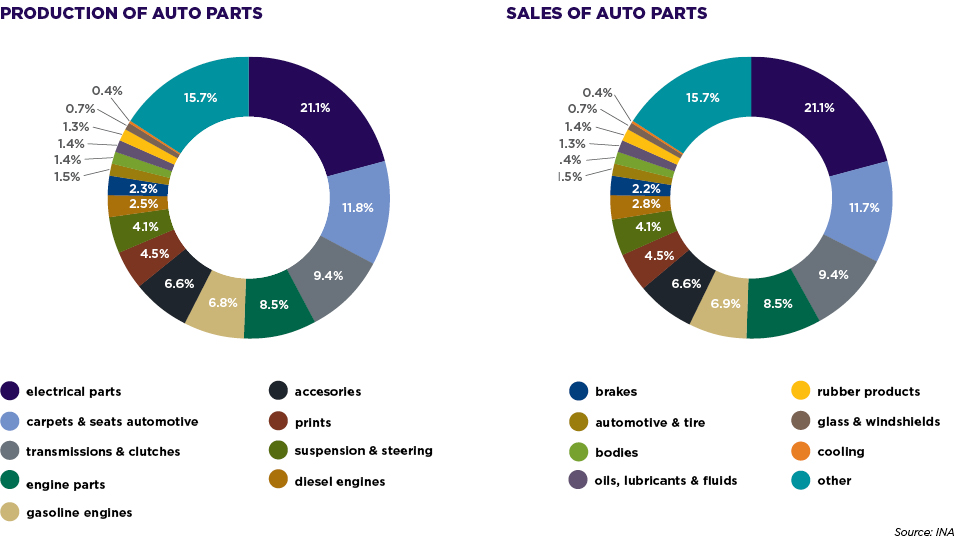