With almost 9 million inhabitants, Mexico City is one of the most densely populated cities in the world. According to INEGI, more than 5.2 million vehicles including cars, trucks, buses and motorcycles were circulating on Mexico City’s roads as of 2015. Of those, 4.9 million were cars. This means that roughly, there is one car for every two people in the city. No wonder, as the saying goes, every hour is rush hour.

Saturated traffic has become the regular state of the city and it is almost no surprise that the maximum average speed in the city is 17 km/h or that the average commute time can be between two and three hours depending on the destination. However, as light-vehicle sales continue rising, mobility has become a concern for both the government and the population.

In an interview with Mexico Automotive Review 2016, Laura Ballesteros, Deputy Minister of Planning at SEMOVI, outlined the history of the problem: the car was for years the king of the mobility scheme in Mexico and most infrastructure investments were oriented to make trips easier for commuters with a private vehicle. Public transport infrastructure had been neglected and people without a car relied mainly on the microbus network to move around the city. With the turn of the century, however, new initiatives were implemented to boost the city’s mobility. 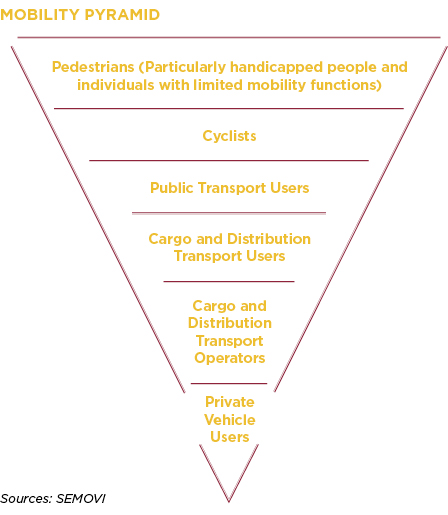 The RTP bus system was inaugurated in 2000 with the goal of offering an accessible and affordable mobility solution. Later, in 2016, the RTP network was consolidated as Mexico City’s Mobility System 1. BRT lines also made an appearance in 2005 with the inauguration of Line 1 of Metrobús. The city’s subway had seen its last expansion in 2000 before the inauguration of Line 12 in 2012. All these projects marked the beginning of a shift in the city’s priorities toward an integrated mobility plan.

According to the new Mobility Law published in 2014, the government’s priorities toward mobility must follow 10 principles: security, accessibility, efficiency, equality, quality, resilience, multimodality, sustainability, social responsibility and technological innovation. All these refer to a wider mobility plan that strives to solve the population’s mobility needs, offering diverse transportation options that can make commutes more efficient while connecting as much of the city as possible.

Following the opening of the Metrobús Line 1, five more routes were inaugurated, making a total of six BRT lines by 2016 that now complement the Metro’s 12 routes. In 2015, Mexico City’s government approved the construction of Line 7 across Reforma Avenue and the project is almost completed. Following the goals established in the new Mobility Law, the government is also working to make transport options as sustainable as possible.

The RTP fleet already includes hybrid and natural-gas powered units and Ballesteros told Mexico Automotive Review 2017 that one of the government’s priorities is to build the necessary infrastructure for electric buses to operate. According to Ballesteros, the projected 22km Green Corridor in Eje 8 Sur will be the first step in the country’s new electric public transportation system. When completed it will also be the first of its kind in Latin America, according to the Mexico City government.

Miguel Mancera, Governor of Mexico City, also issued a statement in 2016 saying that a norm would be published that bans microbuses from the city. “No more ANALYSIS Mobility in Mexico City has transformed from a sch

eme where the car is king to a new model that favors pedestrians above all else. There are still areas of opportunity to improve the city's mobility but investment from the government is helping to speed the process INTEGRATED MOBILITY, THE NEW FRONTIER Sources: SEMOVI MOBILITY PYRAMID Pedestrians (Particularly handicapped people and individuals with limited mobility functions) Public Transport Users Cargo and Distribution Transport Operators Private Vehicle Users Cargo and Distribution Transport Users Cyclists 213 concessions will be granted for this type of vehicle,” he said, forecasting a gradual exit for all microbuses in the city if the norm is officially published. 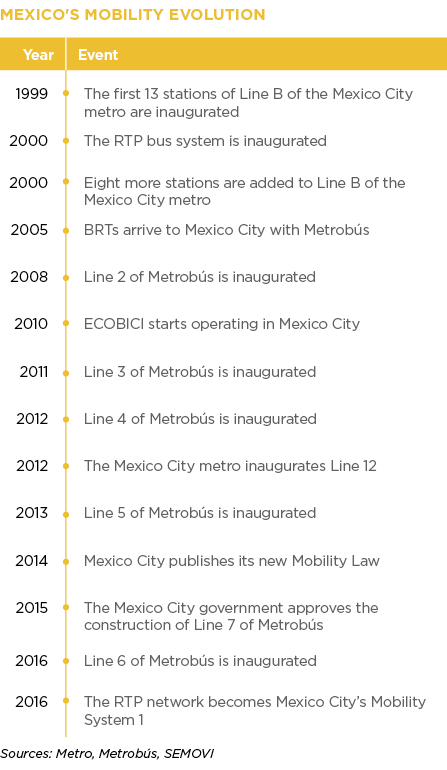 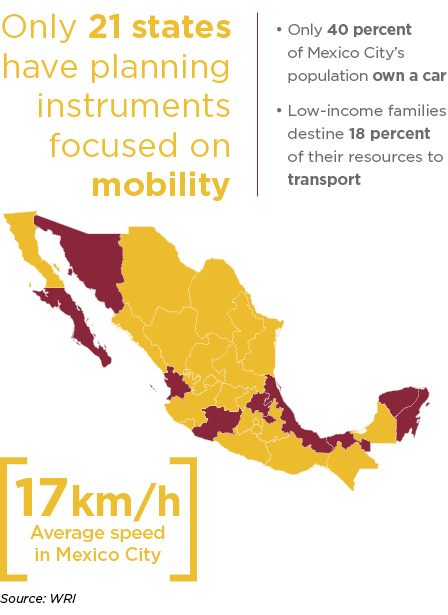 Along with the investments in public transport, the city started recognizing alternative, non-motorized mobility options. Fernanda Rivera, Director of Cycling Culture, Design and Infrastructure for the Ministry of the Environment at Mexico City (SEDEMA), says the ECOBICI system started operating in 2010 with 84 bike stations and 1,114 bikes. The system was operated by SmartBike based on what its parent company Clear Channel had implemented in Barcelona, according to Rodrigo Bejarano, Director of SmartBike Mexico.

“Public transportation is efficient in this city, including the metro and the metrobus, but it is static, linear. Routes go from point A to point B without deviating from their specified path,” says Bejarano. ECOBICI and other lastmile alternatives offered the flexibility and connectivity people needed to move from public transportation stations to their final destination.

The government is also no longer the only participant in developing the city’s mobility structure. The evolution of digital platforms and the rise of alternative technologies has led to the entrance of global players that are providing new alternatives. Platforms like Uber and Cabify have been so successful that Roberto Fernández, Director General of Uber in Mexico City, told Forbes México that Mexico City is already the second-most important city for the company globally.

“The global trend is to offer mobility as a service,” says Ballesteros. “The average person does not own a car in Mexico City. These people represent 60 percent of the population and yet they travel four times a day using a different mobility system.” According to the new goals of Mexico City’s integrated mobility plan, the car is no longer king of the road. The hierarchy has changed, putting pedestrians at the top (particularly people with disabilities and individuals with limited mobility functions) followed by cyclists, public transport users, public transport operators and cargo and distribution transport operators. Private vehicle users are at the bottom.

The city is moving in the right direction to reach an integrated mobility system but there is still work to be done, particularly in terms of planning and education. Mobility ministries are still fragmented across the country, preventing the creation of a national mobility plan. Meanwhile, years of favoring the use of private vehicles has marginalized pedestrians, cyclists and bikers, and for an integrated mobility system to work, all participants must follow the rules established by the Mobility Law.

The street belongs to all of us, no matter what we drive or how we move on it,” says Raymundo Cavazos, Managing Director of Harley-Davidson Latin America.