Mexico’s reputation as an export-oriented, vehicle manufacturer was untarnished in 2016, but a shift may be afoot. At the beginning of the 21st century, perceptions began to change as the domestic market surpassed 1 million units sold in 2004. The global economic downturn of 2008 sent sales figures tumbling to levels not seen since 1999. Almost eight years later, home demand is again on the upswing, and in force. After a record 2015 with more than 1.3 million units sold, the industry is eager to make history with forecasts expecting 1.5 million units sold in 2016.

Mexican consumption patterns are being positively altered by the emergence of newer technologies. The Toyota Prius has become an ambassador for hybrid technology in Mexico, with 2,865 units sold in 2016. This has placed the Prius as the second best-selling model in the high-end car segment, surpassing iconic vehicles like the Nissan Altima. The growing preference for hybrid models has its roots in environmental conditions and the subsequent public policy that affected Mexico City in the second quarter of the year. Increased vehicle offerings, fewer imported used cars and loan accessibility has led to an overall increase in domestic sales. However, even if the domestic market reached 1.5 million units sold, it would still be 400,000 units away from its true potential of 2 million units.

While sales might have been affected by the 2008 economic downturn, production of light vehicles came out almost intact and has experienced constant growth over the past years. In 2015, Mexico became the seventh largest car manufacturer globally. Should global economic trends continue, the end of 2016 could see Mexico crowned as the sixth biggest light vehicle producer. The country also promises an overall production target of more than 5 million units for 2020. In spite of a 3.3 percent reduction in the number of manufactured cars between January and July compared with 2015, AMIA reported an increase of 1.9 percent in light truck production. Industry analysts are still optimistic and forecast at least the same 3.4 million units that were produced in 2015. The inauguration of KIA’s facilities in Nuevo Leon and the upcoming opening of Audi’s plant in Puebla will add to domestic production numbers, helping the country counter negative figures in previous months.

Only 630,935 of the 3.4 million units produced in Mexico in 2015 were made for domestic consumption. The remaining 2.7 million were exported, representing a 4.4 percent increase on 2014 export numbers. But between January and July 2016 the country witnessed a reduction of 4.8 percent in exported units compared to the same period in 2015. More than 80 percent of Mexico’s exports are destined for the US and Canada. The decrease in oil prices has generated a specific interest in larger vehicles including light trucks and SUVs while Mexico mainly concentrates on exporting light vehicles, leading to a significant impact on demand for local production. Regardless of global conditions, OEMs continue to invest in their Mexican production sites, which is a sign of faith in the country’s production future. 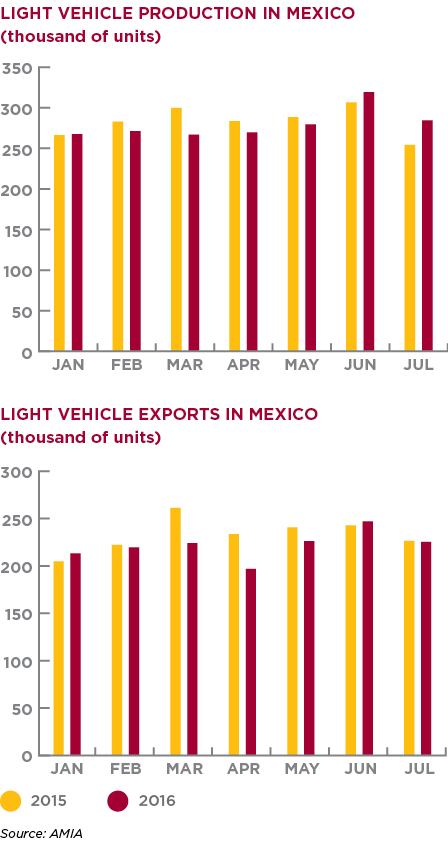