2014 is proving to be a hectic year for the heavy duty segment, including production records, plummeting domestic sales and increasing exportation levels, which is gearing up to see industry records being broken. Miguel Elizalde Lizárraga, the Executive President of ANPACT, stated as much in a press release, predicting that 2014 would be the heavy duty sector’s best year, as long as production numbers maintained the pace registered during the first half of the year. Elizalde Lizárraga attributes this boost to growing demand from the US. “The economy of the US has been stable and more industrial exports have been sent there. As a result, manufacturing levels have risen.” In the first half of 2014, exports increased 50% for all heavy-duty vehicles compared to the same period in the previous record year 2012. This growth has opened the doors to new potential markets for Mexican vehicles. For example, Colombia used to be Mexico’s second largest export destination for heavy-duty vehicles, but it has now fallen to fourth place. For Elizalde Lizárraga, this creates a perfect opportunity to increase trade relations. “Colombia is a great potential market to increase exports of heavyvehicle units. This will happen as long as Colombia changes some of its regulations and enforces the scrapping program to incentivize the renewal of fleets and purchasing of new units.”

This rise in production has led Mexico to become the second largest exporter worldwide of Class 8 tractors and trailers, having exported 63,040 units in 2014. The vast majority of these vehicles were destined for the US, representing 90.5%, followed by Peru with 2.6%, and Canada with 2.1%. Germany maintains its overall global leadership with 85,509 exported units, but Elizalde Lizárraga believes that Mexico has the potential to overtake Germany as the number one exporter of Class 8 vehicles. As all class segments experienced a rise in production levels, ANPACT took note of an untapped segment in Mexico: Class 2b and 3 trucks. Mexico has a dedicated association that deals with light vehicles, AMIA, while ANPACT represents the heavy-duty segment, but no association has done the same for the middle segments. This gap led ANPACT to expand its services, moving from focusing only on Class 4 to Class 8 vehicles and up to include Class 2b and 3 models. “We began to notice that our associates, while offering their customary Class 7 vehicles, were now including Class 3 units in their product portfolio,” says Elizalde Lizárraga. This meant that ANPACT had to undergo a restructuring phase to accommodate this budding market segment. Upon including these new classes, Elizalde Lizárraga discovered that while the government offers financial incentives for heavy and light vehicles, no such financial schemes existed for other segments of the industry. “All regulations and norms must be applied nationwide in order to put all manufactured vehicles under the same standards, including Class 2b and 3,” he states.

Nevertheless, while Mexico catapulted to second place worldwide as a main exporter of Class 8 vehicles, and manufacturing levels soared to new heights, sales in the domestic market plummeted to an all-time low. Compared to 2013, sales dropped by 16.2%, but the drag factor this caused on production levels was compensated by the boost in exports to the US. Elizalde Lizárraga attributes this decrease in the domestic market to a variety of reasons. The first factor is the economic situation in Mexico, our economic growth from 3.9% in 2012 to 1.1% in 2013. “Since internal sales are closely correlated to Mexico’s economic growth, this reduction had an impact on sales.” The second factor is the Fiscal Reform since, according to Elizalde Lizárraga, carriers and fleet owners are being more cautious about renewing their fleets until they are fully familiarized with the workings of the reform. The third and most important variable has been the indiscriminate importation of used trucks, where Elizalde Lizárraga sees the biggest growth potential. He points to other imbalances in the Mexican market, such as Mexico being the second-largest exporter of fifth-wheelers while being the largest importer of used fifth-wheelers. The problem is further compounded by Mexico having become the main importer of used trucks from the US, beating out Nigeria. Where some would see this only as a negative situation, Elizalde Lizárraga sees a silver lining. “The imports of used trucks accounted for the majority of the 16.2% drop in the sales of new trucks in Mexico sold last year. Capturing that segment back would mean opening up a major market slice, which would make a huge difference to the industry. Our best ever year was 2007 when we sold a record number of 51,000 units. If we compare this to the first semester of 2014, we are 35% below that record sale.”

High on ANPACT’s agenda is the promotion of a legal framework and financial assistance scheme that encompass all segments of the industry. One of the norms at the center of safety regulations, NOM-012, is undergoing several changes, and has stirred controversy within the sector. “The industry has certain regulations that all trucks must comply with, such as mandatory seatbelts, fire extinguishers and other criteria pertaining to the physical and mechanical conditions of the units,” Elizalde Lizárraga describes. The previous regulation made allowances for extra weight capacity as long as trucks complied with certain safety standards like ABS brakes and specific horsepower. “The new NOM-012 is proposing that double-articulated trucks will continue to function under these standards, but single trucks and buses will be allowed to move at their highest possible weight capacity without these safety characteristics in place.” Elizalde Lizárraga attributes this revised NOM012 as an attempt by the government to help operators continue their businesses since they cannot afford to buy newer, safer trucks. But ANPACT has an alternative in mind. “If operators cannot purchase safe vehicles, safety standards should not be lowered. Instead, you encourage operators to buy these safe vehicles through financial incentives.” Although NAFTA allows the free flow of goods and states the regulation of heavy duty vehicles from 2009 to 2019, it also has specific environmental regulations that must be followed. “The units that are being imported conform to EPA 98 and these should not be allowed to enter Mexico, given that the country’s emissions standard mandates that all vehicles must meet is EPA 04.” 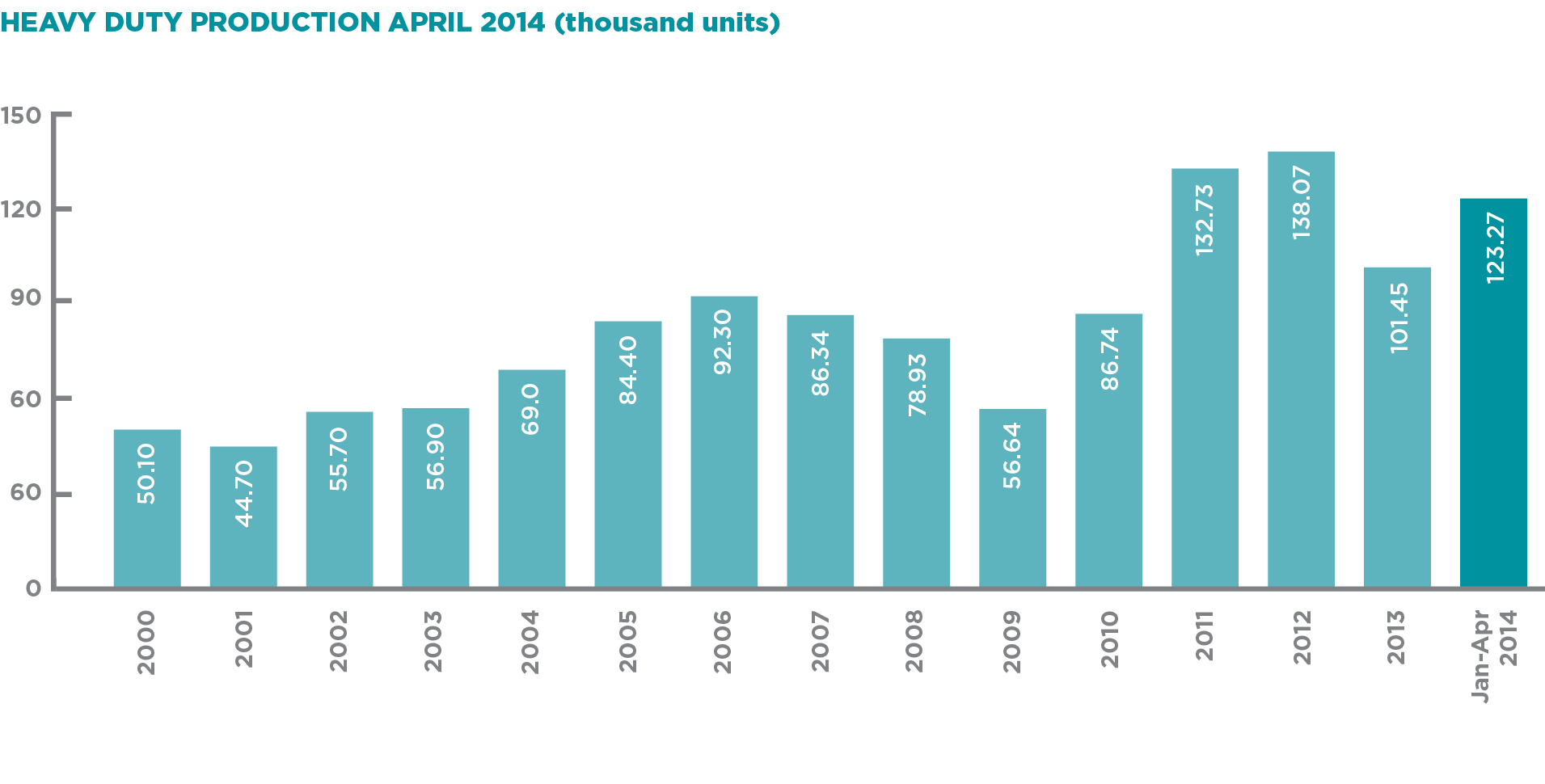 For Elizalde Lizárraga, it is crucial that all norms for the automotive industry in the US and Mexico work together to promote better technology and vehicles, which is particularly important for the renewal of the vehicle park. “Once all our standards are aligned with those in the US, Mexico will stop receiving all these obsolete vehicles.” For the heavy duty sector, the federal government has taken an important step in deterring the entry of such units by bringing Mexico closer to US standards with the publication of the new NOM-086. This norm is renewing outdated criteria and Elizalde Lizárraga predicts that, if correctly implemented, it will keep a portion of the older vehicles off the roads. “This norm had not been updated for the last ten years, so the new version will bring us closer to US standards,” he states. For the next few years, ANPACT will continue to focus on improving safety and environmental regulations. “These norms must also be accompanied with aggressive financing schemes and scrapping programs for operators,” concludes Elizalde Lizárraga.