Sales Are up, but Are Buyer Preferences Changing?

After more than a decade of sluggish light vehicle sales, Mexico is finally on the up, generating some of the best sales figures seen since the boom in 2006. While this is good news for the industry and the country’s economy, customers are now altering their purchasing behavior, conducting in-depth research and browsing online vendors before making their final decisions. This also translates into more specific demands for technology, insurance, and safety, even resulting in a heightened awareness of the impact their purchase will have on the environment. The Mexican car buyer is no longer fixated primarily on price, but is beginning to understand and consider these many variables when choosing their next car.

In 2014, only nine cars were being sold for every 1000 people in Mexico, while ownership rates were 353 cars for every 1000 people. Mexico’s high ratio of vehicles owned versus vehicles sold per capita presents quite a challenging situation for most automakers, since it indicates a proclivity to retain cars instead of regularly renewing them. The national vehicle park also reflects this trend, with an average vehicle age of 17 years. However, every cloud has a silver lining, as this creates more business for the auto parts segment, as well as creating a perfect opportunity to increase sales in the domestic market.

Traditionally, Mexican customers have preferred compact and subcompact vehicles. According to the last census from the National Institute of Statistics and Geography (INEGI) from 2010, a regular Mexican family has an average of four members, which explains why sedan cars offer the best option for the majority of the population. Petrol prices have always had a strong impact on the purchasing behavior of the Mexican population, benefitting subcompact and compact cars that provided the desired fuel economy, as well as affordable total costs of ownership. However, there have been significant changes in the models preferred in the country, following vehicle life cycle evolution and the entry of new brands and models. In 2009, the best-selling model was the Nissan Tsuru with an overwhelming majority share of 54,463 commercialized units out of the total 1,025,520 vehicles sold. Comparatively, by July of 2015, the Chevrolet Aveo had become the most popular model, with 41,534 units sold between January and July, leaving Tsuru in fourth place with only 28,500 units sold. There is a distinctive difference between the sales of both models, but it is also important to consider that now there are more than 40 brands in the country, accounting for more than 100 different models competing in the market. Furthermore even though Tsuru is still a high-ranking model, its safety standards are no longer in line with what the industry expects from a vehicle. While pick-ups have delivered strong sales results in the Mexican market, with the Nissan Chasis Largo as the leader in the overall light truck segment, SUVs have now achieved a stronger position. These models now have an approximately 50% bigger market share than pick-ups, with 135,411 units sold between January and July of 2015 compared with the 94,845 pick-ups sold during the same period. Even given the growth of the SUV segment, the CHASIS Largo remains the most sold vehicle in the light truck segment, closely followed by the Nissan X-Trail. 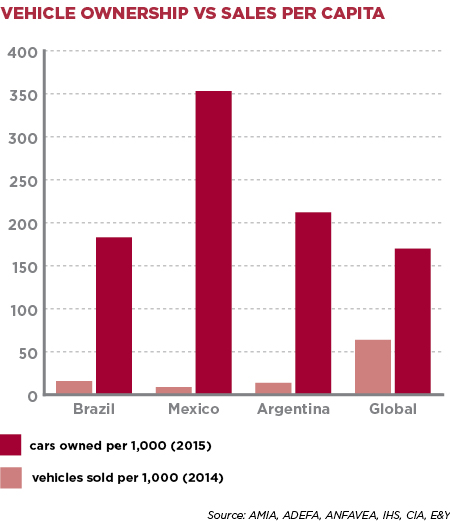 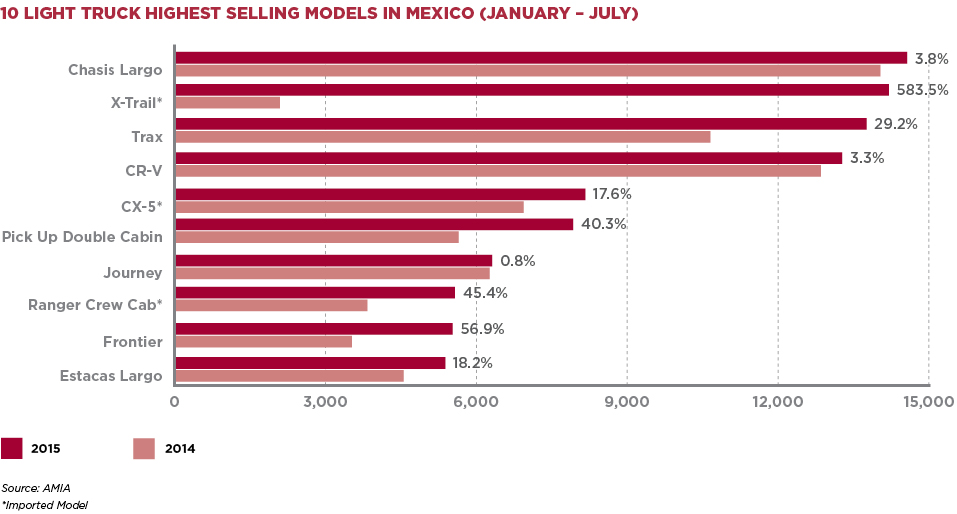 Luxury vehicles have also been gaining ground in Mexico. Although their sales numbers are still quite small, representing 5% of the total market, it is now more common to see a Ferrari or a Maserati navigating the streets. An increasing number of brands are considering Mexico a promising market for their vehicles, which has led to the inauguration of new showrooms from Aston Martin, McLaren, and Lotus. In addition, Rodrigo González, General Manager of Ferrari & Maserati Mexico, says that Mexico is an attractive location for special and limited editions of these luxury brands. This has also been confirmed by José María Herrera, Director General of McLaren México, who has already sold two units of the McLaren 675 more than two months before the official inauguration of the McLaren showroom in Mexico City.

Even though Mexico is still in the early stages of adopting the technology, electric and hybrid vehicles are attracting quite some attention from the public. Mexican customers can now choose between models like the BMW i3, the Toyota Prius, and the Nissan Leaf, although they remain more expensive compared to standard models in the market. However, the introduction of the more affordable Renault Twizy and the Chevrolet Spark is offering a new alternative for users. The Chevrolet Spark is the fourth most popular subcompact car and the sixth highest-selling vehicle in the country, so the fact that an electric version of this model is being introduced represents another milestone for the Mexican market, as the potential to accelerate the nation’s adoption of electric cars becomes feasible. The national interest in these vehicles is piqued, so do not be surprised to see the newest Tesla model on Mexico’s streets the near future. 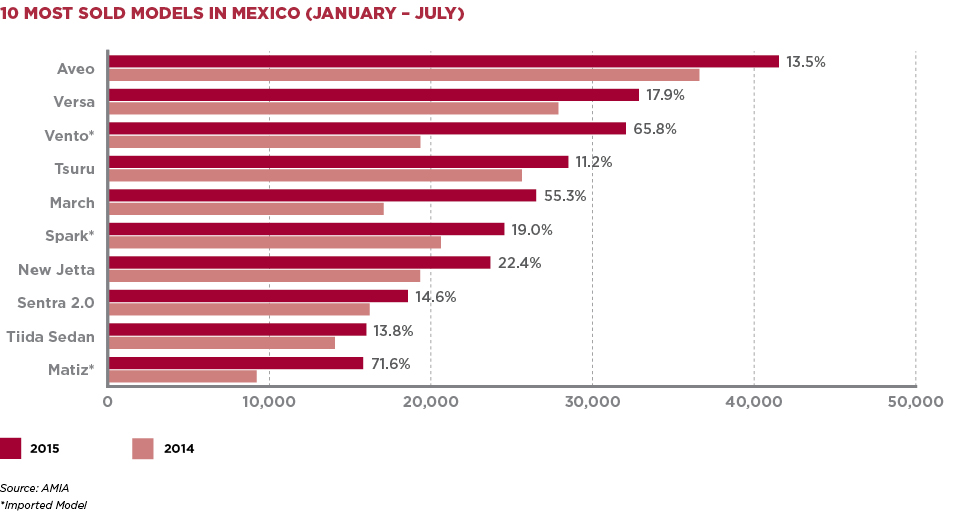