“Mature markets in Western Europe, the US, China and South Korea should not expect to see soaring growth from their automotive industries in the next five to six years,” predicts Oscar Albín, the Executive President of Mexico’s National Autoparts Industry association (INA). He estimates that these markets will see an average annual growth of 1.5% over that period, as opposed to a 5.8% average in Latin America and India. Mexico’s automotive industry, in particular, is well positioned to continue capitalizing on regional demand, offering 16% savings on production costs when compared to the US. The country is also benefiting from China’s reduced cost competitiveness. As a result, Mexico enjoys a positive trade balance within the automotive sector, which reached US$38.7 billion in 2013.

Vehicle production in Mexico is on target to exceed 4 million units by the close of the decade, with export markets for this output expected to diversify. Back in 2002, 85% of Mexico’s vehicle exports went to the US, but this figure dropped to 68% in 2013 as the Canadian, Latin American, and European markets grew in importance. It is predicted that Mexico will produce 24% of NAFTA’s predicted 17.9 million vehicles by 2020. Albín believes that Mexico actually has the capacity to surpass this target, and to represent up to 50% of NAFTA’s vehicle manufacturing. However, he stresses that increasing the country’s capacity to produce technologically advanced vehicles is crucial. Auto parts, including engines and 24 transmissions, make up 7% of Mexico’s total manufacturing GDP, whilst the automotive industry as a whole represents 16%. During 2013, Mexico was the world’s sixth largest producer of auto parts with a production value of US$76.8 billion, having been overtaken for fifth place by South Korea due to demand for home-sourced auto parts from Asian giants Hyundai and Kia, despite recording a 9.6% average annual growth for auto parts over the last three years. Electrical components are the most produced auto parts in Mexico, making up for 17.4% of total production. Explaining the breadth of Mexico’s auto parts production capacity, Albín says, “in Mexico, one can find every single component, bumper to bumper. That being said, we are importing subcomponents to produce all these parts. For example, major lighting companies such as Philips, Hella, and Osram do not have local production so they import electric bulbs for head and tail lamps that are made in Mexico.” In 2013, the sector employed 637,800 people and this is expected to rise to almost 800,000 by the end of the decade. INA calculates that each job created by an OEM leads to seven jobs being created in the auto parts sector. US$57.83 billion in auto parts were exported from Mexico in 2013, with 90.1% going to the US, followed by Canada, and Brazil.

The total value of Mexico’s auto parts production is forecasted to reach US$81.5 billion in 2014, and is set to top US$94 billion by 2020. The northern states maintain their historic hold on the industry, representing 53.6% of auto parts manufacturing activity. However, a huge influx of investment has seen the Bajio claim over 26%, followed by Coahuila with 18.2%. The move towards the center of the country is testament to the increasing diversification of export destinations, with access to ports becoming increasingly important. Albín believes that the major Latin American economies must work together to ensure that this diversification continues. “We need to work closely with Argentina and Brazil to develop synergies that will benefit us all. We must also ensure that any such benefits are balanced, as in the past, some countries have benefited more than others in certain similar situations,” asserts Albín. Figures show that harnesses were Mexico’s most exported auto part in 2013, followed by seats and related parts, as well as airbags. With growth of 28%, electrical parts saw the biggest increase in exportation compared to 2012, followed by catalytic converters which experienced a 26% increase. In terms of imports, the US remains the largest supplier of auto parts to Mexico, followed by China and South Korea, providing 54.6%, 11.7%, and 6.1% respectively. Mexico’s reliance on imports from China and South Korea is something that INA hopes will change as it has created a negative trade balance between the countries due to the fact that Mexico does not have exports to either of the Asian powerhouses.

Looking to the future, INA sees Mexico’s success as being dependent on the evolution of two major axes. The first is the promotion of the domestic market to a level that encourages significant investment, and the second is the development of Mexico as a top three destination for the design and production of vehicles and their components. Tackling the first hurdle cannot be done without addressing the inhibiting effect of used vehicle importation from the US, which equated to 644,209 vehicles in 2013. The cascade of used cars into Mexico has led to a situation where 20% of cars on the road today are over 25 years old. “We are not against the importation of used cars as this is an essential basis of our FTAs. However, there is a clear imbalance with the current situation. Cars that are only fit for scrap in the US are being imported for use in Mexico and this must be regulated,” says Albín. INA believes that the battle on this front can only be won in time through the application of emissions standards, mandatory mechanical tests, and increased regulation to allow only vehicles in good condition being imported. 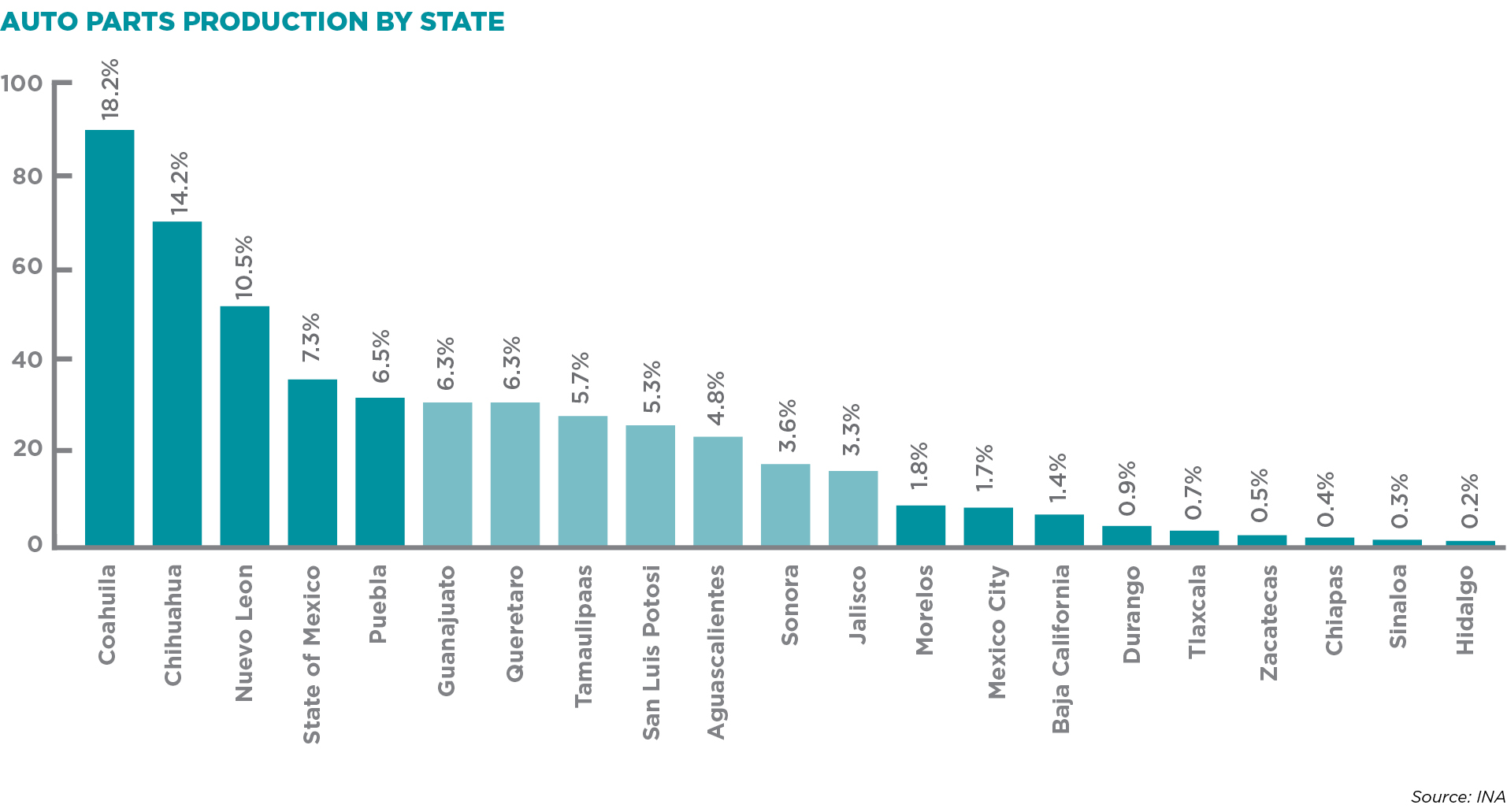