Q: Mexico is experiencing a perfect storm in terms of investment, but how long can this last, and what needs to be developed or maintained in order to sustain it?

A: As a result of the singularities that Mexico has presented as its prime credentials for attracting investment, the country is definitely going to continue its rise as a high roller in the world of vehicle manufacturing and exports. These credentials are measured by location, human resources, and the network of free-trade agreements (FTAs) that the country holds, giving Mexico a real edge in the global market. Human resources in particular are vital for OEMs, Tier 1 suppliers, and for the overall development of our country, as well as having a robust supply chain and a preferable business environment.

Over the years, we have had a tremendous alliance with the Mexican government, which has managed to sustain economic stability, as well as further promoting our industry. Even so, to achieve Mexico’s target of producing 5 million units by 2020, the country has some very important challenges to overcome, especially in logistics and human resources. Provided that we continue to work with the federal and state governments in these areas, we should arrive comfortably at this target.

AMIA is an institution that groups all OEMs that manufacture or commercialize light vehicles in Mexico helping them to better approach the areas of common interest, such as standards, domestic market development, and any issues that affect that domestic market. AMIA is wholly focused on developing the industrial aspects that are in play in the automotive sector. Over the last year, we had two new arrivals, one of which is Hyundai, which is already a full member of AMIA, and the other is KIA, a member of AMIA since July 2015.

Q: With Mexico’s domestic sales in 2015 showing significant growth over the previous year, what role has financing played in this success?

A: Financing has been growing quite nicely in Mexico. It used to be the case that the country would sell 50% of its total vehicles through financing, when the international benchmark is around 80%. Today, around 62-64% of total sales in Mexico occur through financing.

Q: How is AMIA helping to create a more structured second-hand sales environment, ensuring that buyers can be more confident about buying used vehicles?

A: Mexico’s Congress is discussing a change in the law called the Ley de Caminos y Puentes Federales. Passed in the Lower Chamber at the end of April 2015, this law will make the verification of the physical, mechanical, and environmental condition of used cars a mandatory process on federal highways. The law is now at the Senate where it will be analyzed in September 2015. We really have to monitor this change in the law because it is the type of thing that will make the secondary market grow. We need to make sure that any garbage cars in the vehicle stock are replaced. The country has one of the oldest vehicle stocks in the world, with close to 17 years average age, so we need to work with the federal authorities on changes to the law that will allow us to filter our secondary vehicle stock. AMIA is pushing for a world-class public registry of vehicles. The Vehicular Public Registry (REPUVE) is a tool to create more certainty, allowing consumers to search its online database before purchasing a car. It was created due to the law that pertains to the mandatory public registration of vehicles. Each new vehicle that we sell in Mexico today gets an individual chip and is registered in REPUVE, preparing us for the future. Even so, the database still needs to be improved and updated with the older vehicles that are still in circulation. Once this is fine tuned, it should prove to be an invaluable tool for the industry and its customers.

People tend to think that the only way to increase domestic sales is by increasing per capita income, but we have to remember that Mexico sells less than ten new vehicles per 1,000 inhabitants, while Argentina or Brazil were respectively selling 19 and 21 new cars prior to their financial crisis. There is no real explanation hiding in the statistics for per capita income that can account for this, not even in the distribution of income. According to the GINI Index, we have a more equal distribution of income than Brazil, yet they were selling almost 20 cars per 1,000 inhabitants during 2013. The difference is that Brazil is not allowing one single used vehicle to be imported from abroad. Today, while I am not saying we will achieve zero imports, we are reaching a more manageable number. 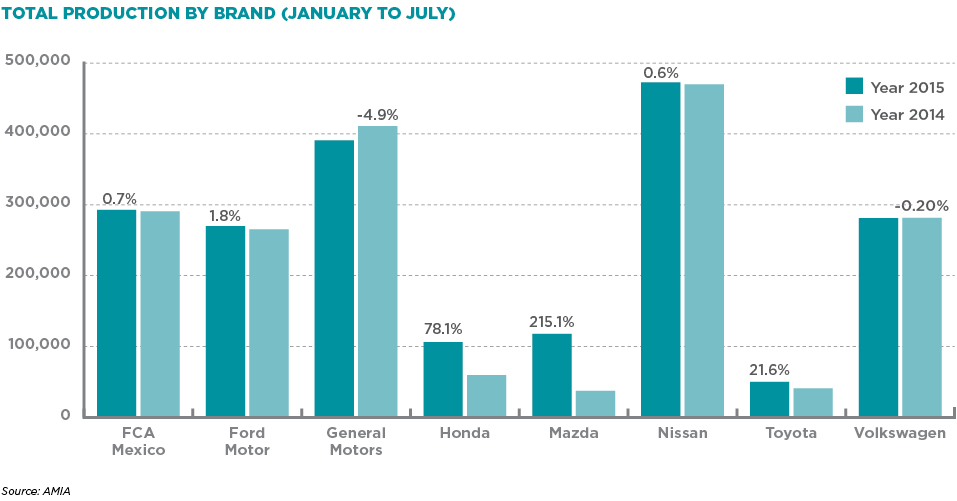 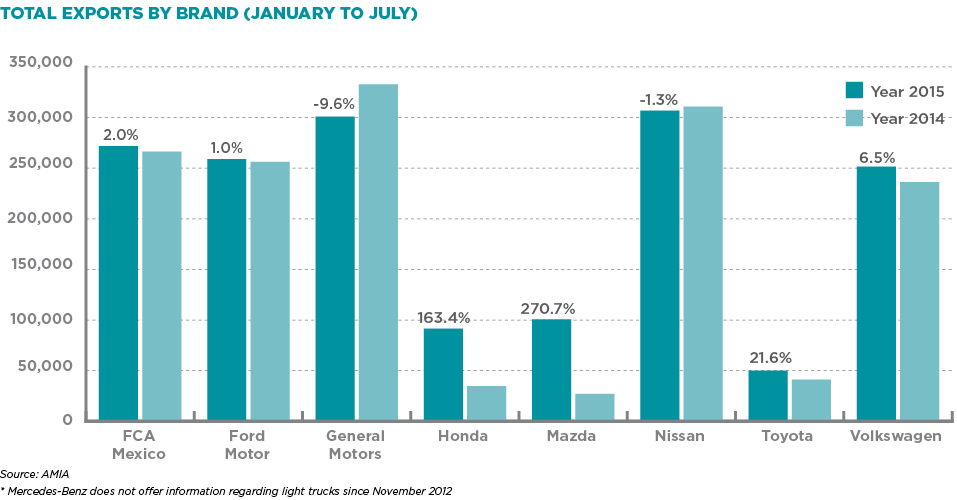