Mexico continues to enjoy an unstoppable level of development in the automotive industry, solidifying 2014 as a major historic milestone in its progress. The country remained the fourth largest global exporter of automobiles, and, by the end of the year, it had become the largest automotive manufacturing country in Latin America, finally knocking Brazil off its spot as the seventh largest automotive producer in the world. Furthermore, the country is now the second largest exporter to the US market, with a market share of 26.1%, leaving Japan in third place and opening a new opportunity to reach Canada’s first-place position by the end of 2015.

From a national perspective, the automotive sector continues to make an important contribution to Mexico’s GDP, growing 16.3% in the vehicle segment and 11.3% in the auto part sector in 2014. On the other hand, even though there is uncertainty regarding global vehicle demand, Mexico’s production values are reaching record figures, and the domestic market is finally reporting figures similar to the sales surge in 2006.

In terms of foreign direct investment, Mexico has become a lightning rod for automotive manufacturers. From 2000 to 2014, the country received an accumulated total investment of US$34.653 billion in the automotive industry, with several major projects also being announced for leading up to 2020, when the country will begin to produce approximately 5 million units annually.

According to the Mexican Automotive Industry Association (AMIA), Mexico manufactured a total of 3,219,786 light vehicle units during 2014, representing an astounding growth rate of 9.8% compared to 2013. Furthermore, compared to the units reported by Brazil’s National Association of Vehicle Manufacturers (ANFAVEA), Mexico’s production during 2014 was 2.3% larger than Brazil’s production, representing an additional 73,400 extra units. In July 2015, Mexico’s total light vehicle production reached 1,981,869 units, showing a 6.7% growth rate compared with January to July 2014. This was mainly due to a 78.1% increase in production from Honda, as well as Mazda increasing its production by 215.1% compared with 2014. From January through June, the industry reported record production figures, until a minor setback of 5,322 vehicles occurred when comparing July 2014 to 2015. This was related to FCA México’s drop in production of 19.7% and GM’s 15.3%.

Overall, all manufacturers have shown growth between January and July 2015, with the exception of GM and Volkswagen, which reported a production decrease of respectively 4.9% and 0.2%. If this trend continues, AMIA expects the country to reach 3.45-3.5 million manufactured units by the end of 2015.

The heavy vehicle industry registered equally positive figures in 2014, reaching 168,882 units with a total production increase of 23.5%, with the bus segment growing 28.24%, while truck production increased by 22.88%. Between January and April 2015, Mexico presented a total production of 100,333 units, which puts it in seventh position as an overall heavy vehicle manufacturer, and sixth when considering only the truck segment. According to Miguel Elizalde, Executive President of the National Association of Bus and Truck Producers (ANPACT), Mexico represents a highly competitive platform for heavy vehicles, strongly focused on innovation and human capital development. Furthermore, ANPACT has set a goal to reach 300,000 units produced annually by 2030.

In 2014, Mexico exported a total of 2,642,887 light vehicle units, recording a 9.1% growth when compared to the 2,423,084 vehicles reported in 2013. By July 2015, the country reached a total of 1,631,969 exported units, representing an increase of 8.4% compared to the same period in 2014. Honda and Mazda were the companies that showed the largest growth, with export increases of 163.4% and 270.7% respectively. Just as with production figures, January through June 2015 presented steady growth compared to the figures of 2014, until July presented almost the same decrease, with 5,423 less units exported. During July 2015, four companies presented a reduction in their exports - FCA México with an 11.0% decrease, Ford with 6.3%, Nissan with 15.1%, and GM with a decrease of 23.1% - which was mitigated by export increases from Honda and Mazda of respectively 114.0% and 62.9%. Considering the numbers from January through July, only GM and Nissan showed an export decrease of 9.6% and 1.3% respectively.

In terms of export destinations, the US remains the main market for Mexican vehicles with 1,153,660 units and a 70.7% share of the country’s total exports in 2015, followed by Canada and Germany. “Our export volumes to Canada have grown more than 27%, making this country our second largest export destination. In Latin America, Colombia is now Mexico’s second most important destination and the fifth largest one on a global scale, just after Brazil,” explains Eduardo Solís, Executive President of AMIA. “Germany remains in third position, while China is currently in sixth position as Mexico’s main destination for the Asian market.”

Last year was a record year for the heavy vehicle industry, with a 27% increase in exports compared to 2013. Mexico is still the fourth largest exporter in this segment, as well as being the second largest for trailers, as Mexico exported only 1,337 fewer trailers than Germany in 2014.

In 2014, AMIA reported total sales of 1,135,409 light vehicle units, which is very close to Mexico’s all-time maximum of 1,139,718 in 2006. By the end of 2014, domestic sales represented 16.6% of the total domestic production, growing 2.6% compared with 2013 to 534,795 units, meaning that 600,614 of the sold cars were imported. Furthermore, from January to July 2015, the country has seen total sales of 721,539 new cars, representing a 20.9% increase over the 596,571 units sold during the same period in 2014. This shows that Mexico is finally recovering from the 2007-2008 crisis, creating strong expectations that record numbers will be reached by the end of 2015. Unlike production and exports, sales numbers in 2015 have continuously increased each month in comparison to 2014, with only Jaguar, Land Rover, Renault, and Smart reporting negative variations from 2014 to 2015 between January and July. Additionally, KIA Motors’ arrival to the market and Hyundai’s full establishment in the country are expected to have an important impact on Mexico’s overall sales numbers. 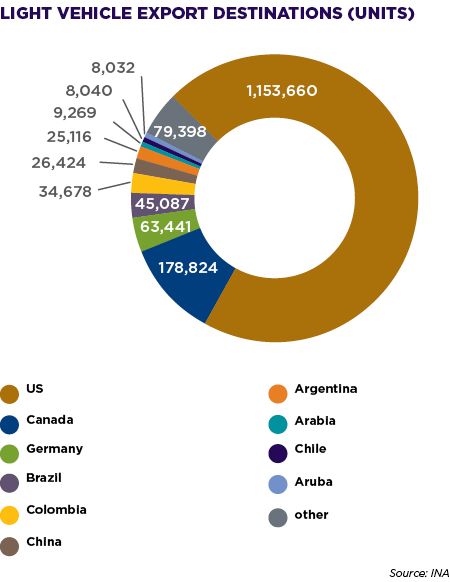 Within the imported vehicle arena, Mexico has also seen major achievements. Even though NAFTA regulations now allow used cars of at least four years old to enter the country, figures from January to June 2015 show an all-time low, only comparable with numbers from 2009. During the first half of this year, AMIA reported only 83,464 imported units, representing a 69.5% decrease compared to the 273,256 vehicles reported for the same period in 2014. Nevertheless, since 2014 there was a notable difference in the number of imported units, with a 29.3% reduction compared to 2013. This was possible thanks to stricter regulations regarding the condition of the vehicles and the elimination of injunctions to skip these legislations.

On the other hand, the heavy vehicle segment was not as successful as in 2013. According to ANPACT, wholesales dropped by 1.4%, while retail sales decreased by 9.8%. “There were macroeconomic reasons for this situation, such as the volatile global environment and lower growth in the segment compared to what was forecasted,” claims Elizalde. “Nevertheless, there were also strong internal reasons including the neglected scrapping program, as well as the challenging situation regarding imported units.” Even so, the forecast for 2015 is quite positive, as the federal government has now updated the scrapping program. This is expected to impact 35% of the national fleet, targeting both new and used vehicle sales.

Investment for plant expansions and new facilities continues to flow into the country, and various investment announcements were made during 2014. Daimler, along with the Renault-Nissan Alliance, shared its investment plan of US$1.3 billion to annually manufacture 300,000 Mercedes-Benz and Infiniti units at a brand new plant in Aguascalientes. Construction will begin in 2015, with the first models to be produced in 2017. Following that announcement, BMW disclosed a US$1 billion project for a new production facility in San Luis Potosi to manufacture 150,000 annual units, expected to be ready no later than 2019. Toyota has also announced an expansion project for its plant in Tijuana to increase its production by 40% during 2015. Moreover, KIA has revealed its new plant project for Pesqueria, Nuevo Leon, making it the first Korean OEM to establish in Mexico. Even though this was the last plant to be announced, it will be the first one to start operations. Construction started in October 2014, and the plant is scheduled to begin operations by May 2016, making it the fastest constructed KIA plant in history.

The first half of 2015 was also full of excitement, since Volkswagen had by March announced its US$1 billion expansion plan for its plant in Puebla. This project will be focused on the new Tiguan and it will take Volkswagen to a 500-unit daily rate of production. GM is also continuing with its US$5 billion investment plan for all its facilities, scheduled to conclude by 2018.

In April 2015, two more announcements were made. Toyota revealed its plans to establish a manufacturing plant in Guanajuato in which it will invest US$1 billion in this facility to create a 200,000 unit production capacity. Two days later, Ford announced a major investment plan of US$2.5 billion, divided between the construction of a new transmission plant in Guanajuato, as well as an expansion for its engine plant in Chihuahua, and a whole new plant also in Chihuahua. With these two projects, Guanajuato has now become the biggest state for the automotive industry, boasting six OEMs within its borders.

Consisting of 860 companies, the auto parts segment now represents 7.4% of the manufacturing GDP in Mexico. This sector currently represents 11.8% of the total manufacturing exports, as well as 18% of the jobs in the manufacturing industry, and is expected to grow 35% by 2020. Between January and April 2015, auto parts production reached US$26.9 billion, representing an increase of 0.2% compared to 2014. Meanwhile, sales increased by 1.1% in the same period, reaching a grand total of US$27 billion.

To support the auto parts segment, the government and Bancomext have relaunched the ProAuto program to help Tier 2 and 3 companies develop as suppliers for major Tier 1 companies. Most OEMs have the objective of maximizing local sourcing, and according to José Rogelio Garza, Undersecretary of Industry and Commerce, the government is now focusing on identifying the strongest areas of opportunity for local players in order to strengthen the local supplier network.

The large number of new projects arising and a continuous evolution of the industry, the competition for specialized human talent has reached a new peak. Areas like Guanajuato are filling up with new companies, and other regions like Nuevo Leon are expected to experience exponential growth in the near future. Therefore, it has become a priority for every player in the industry to develop technicians and engineers with the right abilities to enter the automotive sector, as well as continuously train and retain these skilled workers. The German-born dual-education program is now gaining ground with several companies in the industry, with CONALEP as one of the main institutions devoted to educating the next generation of technicians. Additionally, this has attracted the attention of universities like UVM that are now working on professional technician programs to address the needs of the industry at a more specialized level. At the same time, several automotive clusters throughout the country are directing their strategies toward education. In collaboration with the Ministry of Education, these associations are now helping to create new and more effective education plans, so newly graduates need less training when they start working. States like Queretaro are planning to build their own universities purely focused on the automotive sector, while others like Chihuahua are focusing their efforts on structuring their education programs according to the strongest manufacturing areas in the state. Furthermore, AMIA has founded the National Group of Academic and Research Institutions for the Automotive Industry, which is committed to promoting national and international research projects in the country, as well as proper education for the automotive sector. “This is the perfect moment for Mexico considering the average age of our engineers is 27 years. Our economically active population is expected to double, translating into a brutal opportunity,” claims Solís.

Mexico will continue promoting itself as a strong R&D and engineering destination for automotive companies. Mexico currently produces 80% of the total high-tech exports from Latin America, and the country has more than 30 R&D centers managed by the public and private sectors, as well as several educational institutions. This is one of the four main directives where the Ministry of Economy is placing its efforts, as it collaborates with PROSOFT and CONACYT in order to develop the right strategies for incentivizing these projects.