The automotive industry is now one of Mexico’s most significant, contributing 3.5% to the country’s GDP in 2013. Car assemblers and auto parts manufacturers across the sector hit production and sales records in 2013 and further investment announcements have continued into 2014. The revival of the US automotive industry has played a pivotal role in the country’s success as a production hub, with the eyes of the Big Three, GM, Chrysler and Ford, focused on Mexico. However, investments are also flooding in from Japanese and European investors keen to take advantage of the country’s proximity to North and South American markets.

Increased nearshoring for the North American market saw Mexico post record automotive production and export figures for the fourth consecutive year in 2013, and Latin America’s second largest economy currently sits at number eight in the list of global automakers and ranks fourth amongst the world’s light vehicle exporters. Having produced 3.6% of the world’s automobiles last year, Mexico is widely tipped to reach seventh position by the end of 2014. ProMexico states that by 2017, the Mexican automotive industry will achieve the yearly capacity to manufacture close to 4 million vehicles, which would translate to production lines assembling more than 10,000 units a day.

Figures released by the Mexican Automotive Industry Association (AMIA) showed record production levels in 2013, with 2,933,465 light vehicles manufactured, 1.7% up from the previous year, and a huge leap from the 505,202 cars produced in 1988. Of those vehicles manufactured, 82.1% were exported while the remaining 17.9% fed the domestic market. Monthly production figures for 2014 continued to reach historic levels, with 287,488 units manufactured in May 2014, displaying an increase of 12.5% over the same month in the previous year. In the first half of 2014, output rose 7.4% year-on-year to 1.597 million vehicles, compared to 1.488 million in the first six months of 2013. 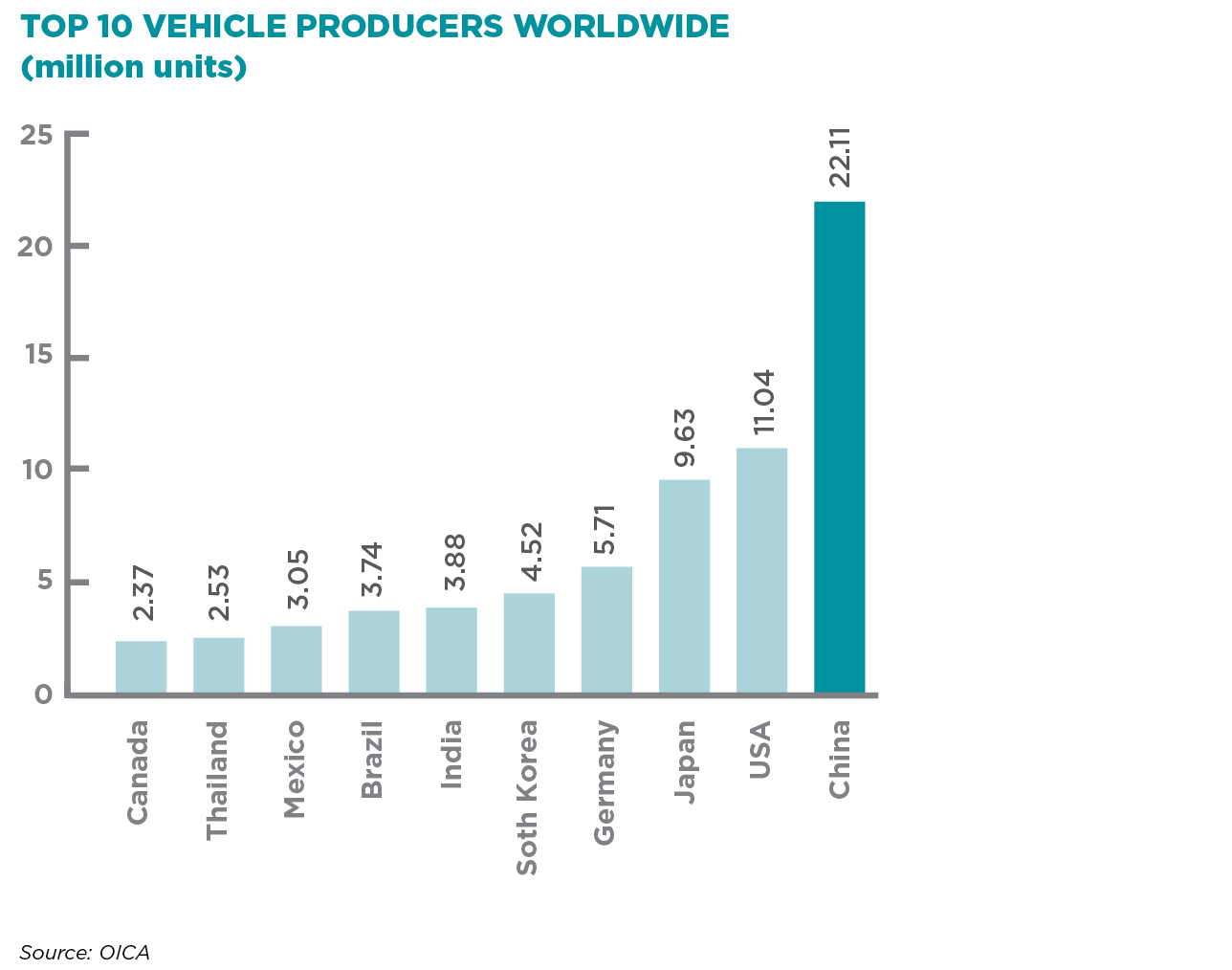 Mexico’s main pull on the production front has been its low cost labor rates, the accessibility which was optimized by the signing of NAFTA in 1994, and the country’s other 11 free trade agreements covering 43 more nations. Mexico’s manufacturing wages are predicted to be up to 30% lower than manufacturing powerhouse China by 2015, allowing Mexico to firmly position itself as a serious international competitor for foreign direct investment. Finally, the country has been investing heavily in creating automotive clusters nationwide with the aim of supporting sector growth. The historic production vortex in the north of the country is seeing real competition from the central Bajio region, which is predicted to collectively account for the largest automotive cluster in Latin America by 2015.

In 2013, Mexico exported 2,423,084 vehicles, with 1,646,950 of those going to the US, a 9.5% increase over the previous year. This saw Mexico overtake Japan, which had been ranked amongst the top two exporters to the US since the 1970s, to become the second largest exporter to the US. In just two decades, exports to the US from Mexico have increased fourfold, and in 2015 the country is expected to overtake Canada as the top exporter to the US. Eduardo Solís, Executive President of AMIA, explains, “There was a time when Mexico represented 4% of the US automotive market. We now represent more than 10%. Mexico will continue to grow, period. Mexico will continue increasing its market share in the US automotive industry, which could reach 12-13% in the next three to four years.” He adds that a 1% increase in market share would equate to around 140,000 extra vehicles, with each additional percentage point gained representing the equivalent of a new production plant and the creation of around 70,000-80,000 jobs. Exports of light vehicles to Canada rose 21.7% to 194,851 units in 2013, making up for a 16% drop in sales to Latin America, which numbered just 307,581 units. Mexican exports to Africa and Europe also dropped 20.2% and 32.3% respectively, although this was effectively balanced by a 45.4% increase in exports to Asia.

Mexico’s heavy vehicle industry association ANPACT explains that Mexico now represents 35% of global production compared to 16% a decade ago, and predicts that the country may export 300,000 vehicles per year in the next two decades. Export figures for the sector also dropped 13.4% in 2013, however the sector is expected to see growth again in 2014.

Domestic vehicles sales figures in Mexico surpassed 1 million in 2013, returning to levels not seen in almost a decade. The last month of the year saw 119,364 new-car purchases, the most seen in any month since December 2007, representing an 8.5% increase from the previous year. However, of the new vehicles manufactured in Mexico in 2013, only 17.9% fed the domestic market, highlighting the export-dominated nature of the country’s growing production capacity. Furthermore, only around 50% of domestic automotive sales involved cars actually made in the country, with the remainder being fed by imports. Despite domestic light vehicle sales increasing steadily since 2009, it has taken a full decade for figures to return to previously recorded levels. For every 1,000 people in Mexico, only eight new vehicles are purchased a year, figures similar to those seen as far back a 1981.

An analysis of light vehicle imports quickly reveals the Achilles heel in Mexico’s domestic market. The importation of used cars in 2013 increased by 40.8% compared to 2012, highlighting a major constraint on Mexico’s domestic new vehicle sales. Frustration is now growing at a lack of government action to curb this. Access to financing also plays a significant role in the domestic market, with only 50% of purchases being made through credit arrangements, far below regional averages. “The government has accepted the significant role it must play in fostering Mexico’s automotive growth potential,” says Solís, “but real and rapid measures must be implemented to address the current barriers to domestic market growth.”

Major global OEMs have collectively announced multibillion dollar investments in Mexico over the last year, divided between new plant openings and expansion of existing production capacity. In 2013, Nissan churned out the most units, with 680,213 cars produced, making up 23.2% of the national total. GM came in just behind, with 645,823 cars, with Ford, Volkswagen and Chrysler rounding out the top five. GM is investing US$691 million as part of a US$1.5 billion overall expansion drive in North America, upgrading its facilities in Silao, Toluca, and San Luis Potosi. Nissan is set to continue its dominance, with a capacity expansion leading it toward its stated goal of producing 1 million cars in Mexico by 2016. Fueling this expansion is an impressive additional US$2 billion investment into the OEM’s current facilities in Aguascalientes. The first phase of the “Power 88” project, which will see Nissan increase its annual production levels by 25 percent to 850,000, was opened in late 2013. IHS Automotive has predicted that OEM investment levels into Mexico could amount to US$3 billion annually in the coming years.

Nissan’s prominent place on the production charts is a testament to the general trend of mounting investment from Asia into Mexico. The ability to move parts into Mexico without tariffs is a major incentive to establish a production base in the country, and Honda Mexico’s Commercial Director, Horacio Chávez Reza, explains that the company’s US$1.25 million investment in the central state of Guanajuato represents the beginning of a new era, with Honda North America soon to produce 95% of all Honda cars sold in the region. North American OEMs have been taking advantage of Mexico’s strengths for longer. Ford’s first steps in Mexico were made in 1932 and its ever increasing faith in the country is illustrated by the fact that all production of the Ford Fusion for North America is taking place at its Hermosillo plant. Investment announcements by Audi, BMW, and Mercedes-Benz also highlight Mexico’s growing attractiveness for premium vehicle production. Upon the laying of the foundation stone for Audi’s new plant in Puebla, due to open in 2016, the company’s executives referred to the announcement as a dream moment. The US$1.3 billion dollar investment is part of Audi’s race to overtake BMW as the world’s leading premium car manufacturer, and it came as no surprise therefore that BMW announced a plant to be built in San Luis Potosi, with an estimated annual capacity of 150,000 vehicles. Nissan has also recently announced a partnership with luxury carmaker Daimler, with the two OEMS collaborating to jointly produce Mercedes-Benz and Infiniti cars at Nissan’s third plant in Aguascalientes. 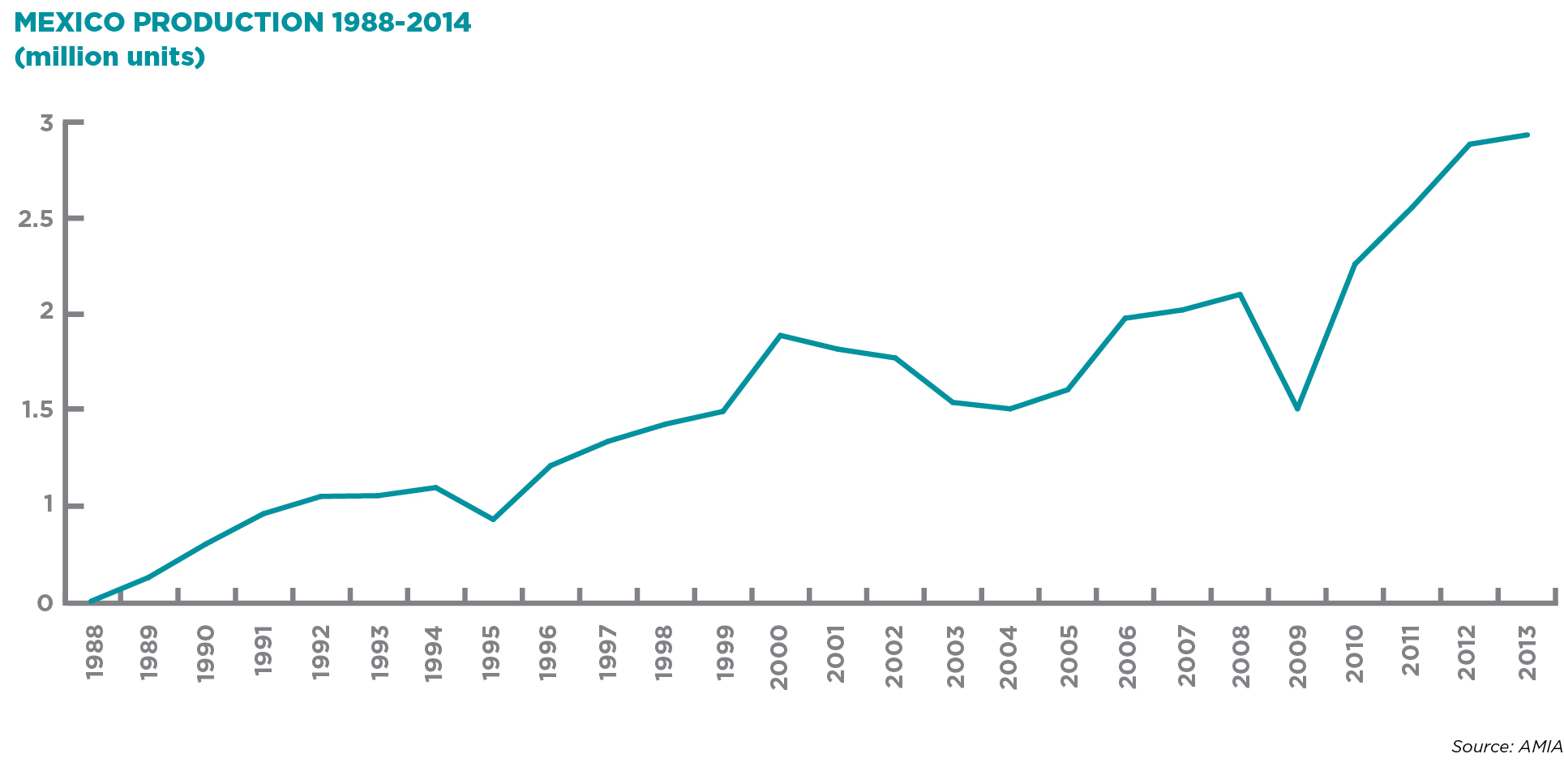 Localization initiatives are seeing OEMs intensify regional procurement drives, and many suppliers have accompanied their OEM clients to establish operations in Mexico. Leading global supplier Bosch has nine plants in Mexico and supplies parts for virtually every aspect of the automotive production cycle. With each new OEM plant announced, suppliers make nearby investments, evidenced from the 25 Japanese suppliers that declared moves to Mexico following Honda’s US$800 million Celaya investment. Similarly, Mazda’s US$650 million investment in its plant in Guanajuato is attracting suppliers from both Mazda and Toyota, with the new plant including capacity for the production of 50,000 sub-compact Toyota models.

Mexico has risen as a top auto parts manufacturer, and is currently ranked in sixth place worldwide, after being narrowly overtaken by South Korea in 2013. According to Oscar Albín, President of the National Auto Parts Industry (INA), the sector is currently enjoying unprecedented success. In 2013, auto parts production in Mexico was valued at approximately US$76.8 million, employing 637,800 workers. 90.1% of all Mexican auto parts production was exported to the US in 2013, followed by Canada, Brazil, and Germany. Growth should anchor this sector through 2014, with total auto parts production value set to reach US$81.5 billion. The country already hosts 89 of the world’s 100 leading auto parts companies, and competition is stiff within the sector.

Mexico graduates over 100,000 engineers each year from 900 graduate engineering and technology related degree programs. While US engineers are on average 55 years old, Mexico’s engineering base has an average age of 27. While 25% of US based engineers will retire in the next decade, Mexico will continue to graduate hoards of young talent. The automotive industry is benefitting exponentially from the wealth of young engineers that are feeding the sector and are employable at a fraction of the cost of their North American counterparts. Today, hourly manufacturing wages in Mexico average US$2.70, exceeding the overall national average of US$2.43, but still far below those of the US. Mexico is currently home to 40% of all automotive industry jobs in North America. Mexico’s major challenge, as investment continues to pour into the country, is to ensure that graduates are equipped with the right skills for the multitude of manufacturing requirements newly established companies are demanding. Areas like the Bajio region are now experiencing what some have referred to as the beginning of a talent war. However universities, governmental bodies, and private companies are joining forces nationwide to form a triple-helix support network for human capital development.

The next step for Mexico is the move towards high-tech production and development, and the evidence points to this happening already, albeit to a relatively small degree. According to PwC, increasing investment in Mexico’s automotive sector has led to the creation of more than 20 private and public R&D centers. Associations like INA and AMIA are working hard with the public, private, and academic sectors to develop the right conditions to support innovative production centers in Mexico. “If we really want to reach our potential, we need to speed up our capacity to develop technologically advanced vehicles. Otherwise, we will fall behind in the race,” says Albín.