Amazon the Most Valuable Brand in the World (Once Again)

Amazon, the undisputed winner of the COVID-19 pandemic, is once again the most valuable brand in the world, according to Kantar and WPP. ‘BrandZ Top 100 Most Valuable Brands’ reports that Jeff Bezos' company value has increased by 32 percent over the previous year thanks to his commitment to the digitalization of the logistics systems, efforts made in last mile deliveries and the impact the company has had on its clients during the pandemic. The Seattle-based company first entered this list in 2006, when it was a fledgling online store offering books to its customers. Today, Amazon is valued at US$415 billion, about US$100 billion more than the previous year. The Top 10 on the list published by Kanter and WPP are: Apple (US$352 billion), Microsoft (US$326 billion), Google (US$326 billion), Visa (US$186 billion), Alibaba (US$152 billion), Tencent (US$150 billion), Facebook (US$147 billion), McDonald's (US$129 billion) and Mastercard (US$108 billion). 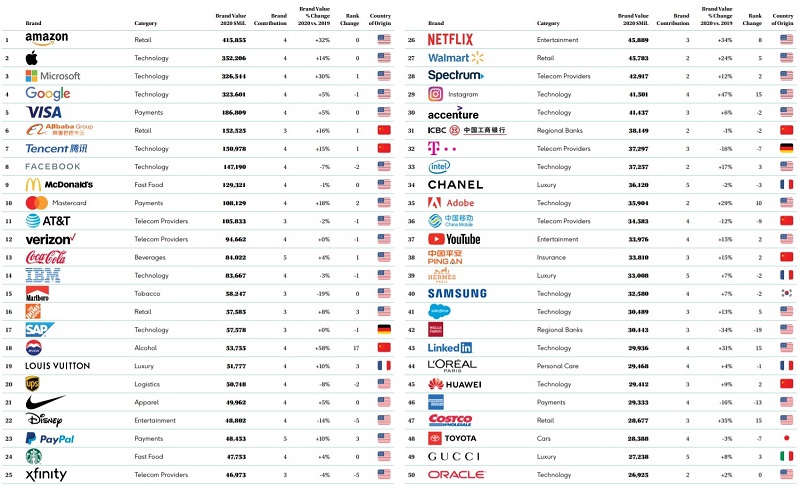 Innovation and agility in sales and delivery processes and the commitment to improve e-commerce platforms have been the major elements that have made such a difference in the retail sector, reports Kantar and WPP, which has led to the most digitized companies to occupy the Top 10 spots in the retail sector. In this ranking, brands such as Home Depot, Walmart and Costco appear after Amazon and Alibaba. Costco has had 35 percent growth over the previous year. It is the fourth brand that has grown the most in the world over the past 12 months, behind Moutai, Instagram and Lululemon. JD.com, Ikea, Aldi, Lowe’s and eBay complete the Top 10 of the world’s most valued brands in the retail sector. “Operational changes had produced online-offline (O2O) integration that enabled retailers to better meet the unprecedented uncertainties and pressures of serving customers during a pandemic,” the report says.

The ranking published by Kanter and WPP can be used as a tool to understand how consumption has evolved around the world over the last 20 years. One example: in 2001, the Top 10 most valuable brands were led by Coca-Cola, followed by Microsoft, IBM, Intel, General Electric, Nokia, Ford, Disney, McDonald's and AT&T.