Retail Moves from Financial Districts to the Suburbs

COVID-19 forced the world’s leading companies to ask employees to stop coming to the office every day. What a few months ago looked like a dystopian future (hundreds of thousands of people working from the comfort of their homes) became a reality due to the pandemic. Productivity increased, according to analysts, and so did the happiness of workers, says Boston Consulting Group. However, confinement and home office also created unexpected problems, especially for the retail sector. The financial districts, converted into autonomous economic units with restaurants, hairdressers, dry cleaners, banks, supermarkets and convenience stores, are no longer receiving thousands of workers on a daily basis. This has led businesses to shut their doors in London, New York, Mexico City, Madrid, Milan or Buenos Aires, while financial districts like The City in London, Wall Street in New York, La Defénse in Paris or Reforma in Mexico City see their future in jeopardy.

According to Andrew Busby, analyst at Forbes, the situation has led some of the most visible brands to seek external advice regarding the reorganization of their business model. “Pret A Manger, a sandwich chain, is faced with a lack of office workers, is overhauling its business, renegotiating rents and has also brought in advisers from Alvarez & Marsal and CWM to build a ‘radical’ new strategy to adapt its business model,” Busby wrote in Forbes. 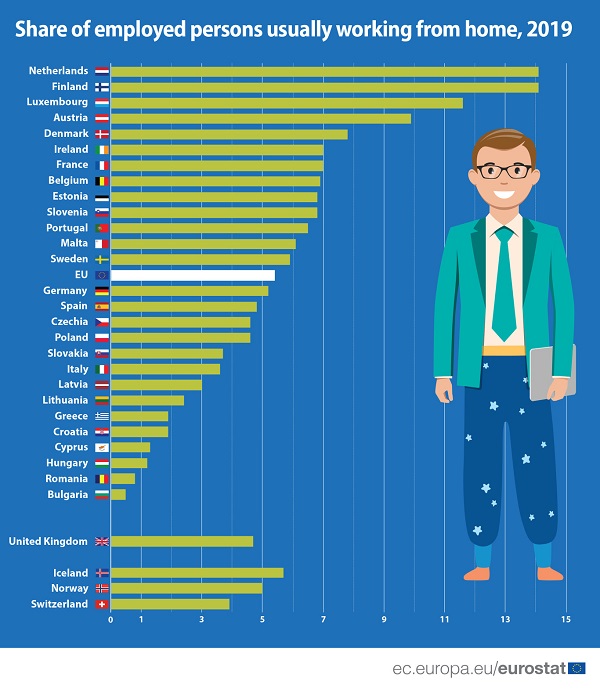 The future of office work remains uncertain.  Many countries, especially in Europe, have entered the so-called new normal. However, home office is still very common. This is the case of Belgium, Spain, Netherlands, Italy, France or Germany, where thousands of office workers continue to work from home. According to a survey conducted by Eurofund, before the COVID-19 pandemic, the EU countries where teleworking was most common were Finland and the Netherlands, with 14.1 percent of their workforce working from home. Today, those figures have increased significantly. The Netherlands, Finland and Belgium continue to lead with 50 percent of employees working from home, while countries unaccustomed to telework, such as Spain, are above 30 percent. “Some large companies in developed economies have already said that teleworking has gone from being a large pilot project without a specific plan to becoming the usual way of organizing the labor market. The return to work of employees will not mean that they have to move, unless they decide otherwise,” said Susan Hayter, Technical Adviser to the Labour Organization (ILO), in an interview published by the UN.

The data collected is not a positive sign for financial districts, considered the economic heart of many cities. This situation, according to Busby, could force the economy to move to the suburbs, where there is a greater need than ever for those types of services that were previously located in financial districts. “With the majority of us opting or being forced to work from home, all that retail and hospitality spend is not going to dry up. Instead, it will pivot to local high streets - something we have been encouraged to do for years. It just took a global pandemic to act as the catalyst for change,” Busby said.

Conditions for home office, however, are completely different in emerging countries like Mexico. According to INEGI, more than 40 percent of the population works informally. In other words, more than 30 million workers are unable to telework. To solve this problem, according to Hayter, it is necessary to wait for the market to change and for these new services to begin to emerge in residential neighborhoods to relocate a high percentage of informal workforce. “This will have a longer-term impact on employment in developing and emerging economies. The problem is that the emergence of new service sectors will take time, so the negative impact of rising unemployment will be felt immediately. Inequalities in terms of digitalization may further hold countries back from taking advantage of these opportunities,” said Hayter.