CFE Down the Years & The Unhealthy Finances of CFE

At the beginning of the 20th century, Mexico had a electric power generation capacity of 31MW which was owned and operated by private companies. But in 1933, under the administration of President Lázaro Cárdenas, it was declared that power generation and distribution were public responsibilities. It took some time before this decree became fully effective. By 1937, a crucial year in Mexico’s electricity industry, the country had 18.3 million inhabitants, out of which only seven million had access to electric power. The three private enterprises that provided this utility focused on profitable urban areas, supplying power with constant interruptions and at high tariffs, while 62% of the population that lived in rural areas was left out of the coverage.

This marginalizing situation was hardly conductive to the country’s development, leading the Federal Government to create the Federal Electricity Commission (CFE). This entity was entrusted with the task of directing a national system of electric power generation, transmission, and distribution based on economic and technical principles. CFE did not seek profit and was meant to deliver the best performance for minimal costs to meet the interests of the larger population. The state-owned utility began building power plants and expanding transmission lines, contributing to the country’s development by enabling water pumping for irrigation purposes and powering mills. By 1946, CFE had an installed capacity of 45,594kW, a staggering increase from the 64kW it had just eight years earlier. Private utility companies stopped investing, forcing CFE to generate and sell these private companies energy for distribution.

In the late 1950s, CFE was contributing 54% of the 2,308MW of the national installed capacity. However, only 44% of the population had access to electric services in spite of the government’s efforts to expand the grid. This led President López Mateos to nationalize the electricity industry in 1960. The President’s action led to the integration of the National Electric System and accelerated the country’s industrialization by extending power supply coverage. The installed generation capacity amounted to 35,385MW at the beginning of the 21st century, with CFE’s services reaching 94% of the population through a distribution and transmission network of 614,653km. It is estimated that CFE now serves close to 27 million clients and adds a million new customers each year.

The Mexican legal framework details how the electricity sector operates. Article 27 of the Constitution states that the electricity industry belongs to the State, which is charged with controlling and developing it. There are several laws that further expand on Article 27. The Electric Energy Public Service Law (LSPEE), a legal document that details CFE’s institutional and operational framework, was published in 1975. The LSPEE indicates that the State is responsible for electricity related affairs intended for public services, such as generation, distribution, and supply. The regulatory framework emphasizes that concessions will not be given to private parties. Instead, the LSPEE appoints CFE as the sole provider of electricity for public purposes while SENER dictates the policies and rulings related to electricity as a public service. These have to be observed by CFE and every person or entity that touches upon power generating activities. CFE’s responsibilities include planning the national electricity system, being the sole responsible party for generating, transforming, distributing, and selling electricity in Mexico, and carrying out works and installations that involve the national electric system. Following the Energy Reform, CENACE was empowered to run the grid as an independent systme operator.

Although CFE is the only company allowed to distribute energy, the generation of power for self-supply or to sell electricity to CFE is permitted under several conditions that have to be approved by several entities. Granting these permits falls to SENER, which nevertheless still has to take CFE’s opinions and advice into account. CFE is ruled by a Governing Board composed of the Minister of Energy, who heads up the board, the Minister of the Treasury, the Minister of Social Development, the Minister of Economy, the Minister of SAGARPA, as well as the General Director of PEMEX and three representatives of the CFE trade union.

According to Article 36 of the LSPEE, self-supply is permitted when the corresponding permits are granted. This legislation also regulates the sale of energy outputs to CFE. It is not surprising that the utility company has grown to be more in favor of cogeneration and renewable energy projects in recent years. A developer’s creation of a project is followed by a request for permits submitted to CRE. CFE then conducts interconnection viability studies. If these are positive, an interconnection contract is signed. In the case of larger projects where CFE calls for bids, the winning party concludes a commitment and purchase capacity agreement with CFE and then requests permits from CRE.

CFE’s vision for renewable energy projects, as laid out on its website, is to have them develop Mexico’s industrial capacity and create jobs, diversify the energy matrix, while making use of the country’s renewable resources contributing to the health and well-being of its citizens. Other benefits include complying with international agreements and environmental commitments, decreasing the variability of energy production costs, lowering dependence on hydrocarbons and fostering private investments

In the past decade, CFE’s finances have weakened gravely, according to a document presented by Francisco Rojas Gutiérrez, CFE’s Director General, in 2013. The utility company’s tariffs are not enough to cover its costs as the subsidy given to electricity is higher than the company’s profit. The difference between the subsidy and CFE profit’s reached its highest points in 2009, when its operating loss amounted to MX$42.855 billion (US$3.296 billion). Until 1999, operating profit covered the total subsidy and even left a positive balance. However, since 2000, the operating costs combined with the subsidy have consistently been higher than the revenue generated. CFE blames this financial burden on energy losses incurred in Mexico’s central region.

In the last ten years, the company’s debt has grown by 371% while its equity has fallen by 82.2%. Additionally, the company has overdue loans that amount to MX$44.14 billion (US$3.395 billion), which are equal to 14% of its total 2012 revenue. The company is facing a budget deficit that was estimated to amount to MX$54 billion (US$4 billion) in 2013, compared to just MX$10 billion (US$769 million) in 2012. This is mainly due to fuel price increases, which represent 40% of the utility’s total costs. The CFE allocated MX$50 billion (US$3.8 billion) for fuel purchases in 2002, compared to almost MX$160 billion (US$12 billion) in 2012. According to SENER’s figures, CFE faces losses of 12% of generated energy at a national level, and 20% in the central region of Mexico. This generated but not billed energy adds to the operating costs. Liabilities must still be added to this financial picture. The utility company’s liabilities grew 139.7% between 2003 and 2013, amounting to MX$884.261 billion (US$68 billion), half of which are pension liabilities.

The Federal Budget for 2013 allocated CFE MX$269.250 billion (US$20.71 billion), but according to the company’s Governing Board, this was not enough to cover its financial requirements. As for 2014, CFE saw its budget lowered by MX$7.5 billion (US$576 million) compared with 2013. This year the CFE will devote MX$56 billion (US$4.30 billion) to buy electricity to private producers, which is MX$8 billion (US$615 million) more than in 2013. According to SENER, 36% of generated electricity currently comes from private companies.

CFE limited the use of cogeneration and hydroelectric plants due to natural gas critical alerts that PEMEX issued in the past few years as a result of insufficient pipeline capacity, as well as the droughts Mexico experienced between 2011 and September 2013. The cost for CFE of each million Btu of fuel oil is US$17, compared to just US$4 of natural gas. This situation forced the utility company to make extra expenses that amounted to MX$19 billion (US$1.46 billion) in 2012. CFE still operates 17 fuel oil power generation plants.

Despite competition, the private sector is also a financial pillar of support for CFE. The need for improved transmission infrastructure in Mexico is an example of this. From 2006, when the first Open Season was carried out in Oaxaca, to 2012, 141 licenses for the installation of 4,605.1MW of capacity had been given out by CRE. Statistics from the regulator show that over 70% of transmission-related projects in that timeframe were carried out by the private sector, equivalent to US$5 billion in much-needed investments.

With the Energy Reform mandating for PEMEX and CFE to turn a profit within two years by becoming competitive in the market, the utility is going to have to undergo a period of adaptation. But in a market where the private sector has shown itself to be enthusiastic about helping out financially, and with many of the aces still in CFE’s hand, careful planning and investments could lead it back to profitability 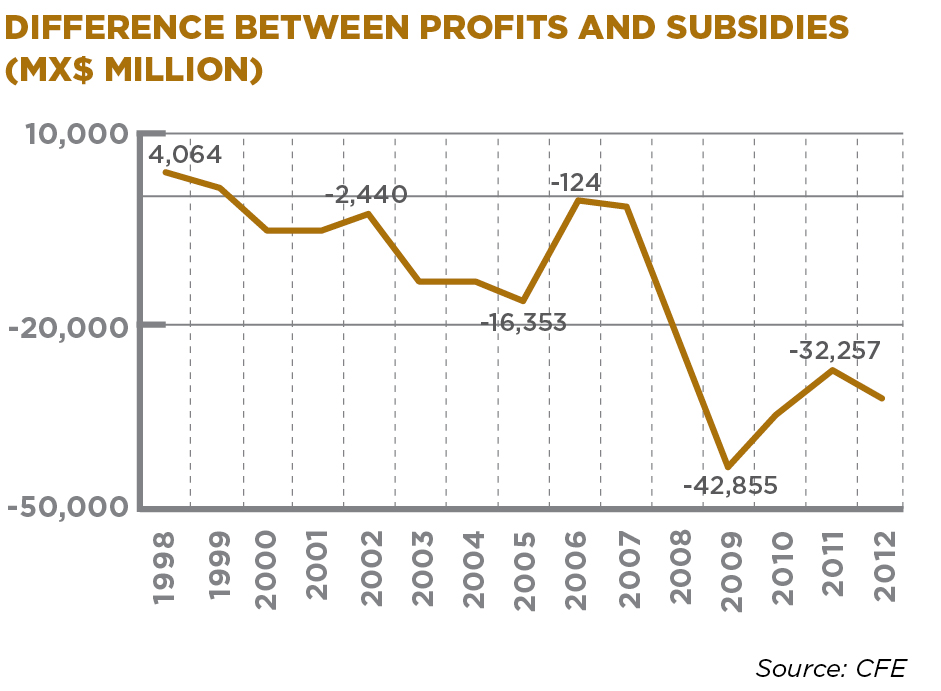