According to figures published by SEMARNAT at the end of 2013, climate change costs Mexico the equivalent of 7% of GDP, or US$120 billion each year. Faced with this scenario, the government has stated the importance of environmental sustainability as a catalyst for economic development, and not the hurdle it was once seen as being. “It has long been discussed how to make economic growth compatible with the preservation of natural capital, pollution alleviation, and carbon emission reduction through sustainable development. The executive power, through SEMARNAT, is convinced it is feasible to achieve both and foster economic growth while preserving Mexico’s natural capital for future generations,” explains Francisco Barnés Regueiro, the current Director General of the National Institute of Ecology and Climate Change (INECC). He emphasizes how President Enrique Peña Nieto’s administration is working towards continuing the efforts and commitment of previous administrations.

Barnés Regueiro argues that the General Law on Climate Change, published in 2012, has become a turning point not only for Mexico, but on a global level, since Mexico is the second country to have enacted such a law after the UK. He stresses that the law covers multiple issues but one of its main goals is strengthening the planning tools to fight climate change. It mandated the creation of the National Climate Change Strategy and laid out its amendments for the next 10, 20 and 40 years, while detailing the concrete actions to be taken on climate change during the current presidential term. It obligates states to carry out their own climate change planning. This will mean including the creation of climate scenarios and vulnerability atlases to better understand the risk of different climate effects.

Barnés Regueiro notes that the law also formalizes a number of goals that Mexico must reach. These include a 30% reduction in carbon emissions by 2020 compared to 2000, and a 50% reduction in carbon emissions by 2050, 35% of energy generation must come from renewable sources by 2024, and the forestry sector must have net emissions of 0% by 2020. “In a way it is a compendium of the commitments Mexico has made and their formalization into law. Obviously these strategies have to be reflected on the sectoral plans, but most importantly all are compatible with Mexico’s international obligations.”

Previously, the Ministerial Climate Change Commission, formed by 13 state ministries that are involved in the fight against climate change, fell under the responsibility of SEMARNAT. However, in early 2013 President Peña Nieto strengthened this Commission by making the Mexican President its head, with the power to delegate responsibility to the Minister of the Interior or the Minister of the Environment and Natural Resources.

From a broader perspective, the National Climate Change Strategy integrates all efforts by the ministerial commission, state governments and INECC, as well as the private sector, academia and NGOs. Barnés Regueiro stresses that this new composition is very relevant for INECC as it decentralizes control and provides it with budgetary autonomy. “We are part of SEMARNAT but our main governing body is a board integrated by state ministries and CONACYT. This also fosters integration because INECC’s work is not only focused on SEMARNAT, and has to be compatible with the sustainability needs of other government agencies,” he says. This strategy also establishes goals and financing mechanisms, such as the creation of a green fund, which is designed to channel foreign resources and provide resources for specific projects in Mexico.

INECC works with all Mexican states to complete their climate change plans. Barnés Regueiro adds that many municipalities are also working on their own plans and have put together their own vulnerability and risk maps. “The idea is to focus on two broad issues: the route Mexico has to take to achieve economic growth while also lowering emissions in different economic sectors, and reducing Mexico’s vulnerability to climate change as it is currently one of the most vulnerable countries in the world,” he emphasizes.

As Barnés Regueiro underlines, economic growth and sustainable development are not two opposing concepts. As a developing country, Mexico has to take all necessary actions to achieve economic growth and a sustainable approach can yield many positive returns toward reaching the first goal. “For example, avoiding gas flaring has many environmental effects but it is also economically better as it reduces gas consumption.” To identify the best portfolio of actions for Mexico to get closer to its goals as well as the economic effect they would have on job creation and income redistribution, INECC develops general balance models. Barnés Regueiro warns these models are not predictive of what will happen but set a direction for actions that are both economically sensible and compatible with sustainable development. “What we have seen in the low carbon emission project portfolio is that we could even achieve economic growth of over 5% in the trending scenarios, while generating up to 500,000 jobs a year. This has to be economically progressive as many of the initiatives are directed towards the most vulnerable sectors of the population.”

Mexico is particularly vulnerable to climate change because of the range of different climates that exist across its extensive territory, but also due to the living conditions of its poorest citizens. Barnés Regueiro points out that 46% of the population in the country is poor, that 63% of the agriculture is seasonal, making it prone to frost, drought and storms among many other natural disasters, and that most of the watersheds have been affected by land use. “The impact and intensity of these situations are worsened when combined with the effects of climate change. For example, in 1990, Mexico only had 200 extreme climate events, which increased to 1,300 in 2008,” Barnés Regueiro says.

The increase in extreme climate events has led to worsening poverty in already poor communities, but approaches taken so far may not have been enough. “We need to determine the value of climate change risks. How much will a strong hurricane in the Yucatan Peninsula cost for the tourism industry? What is the risk of flooding in Mexico’s southeastern cities? What is the risk to agriculture in the north if struck by drought, and which harvests will be affected? These are questions we have to ask ourselves to prepare for what is coming,” says Barnés Regueiro. Once the value of the total risk and the most vulnerable locations are known, the right adaptation strategies can be established. “But we need to provide resources for adaptation, otherwise we will keep facing horrible disasters. It is a way of insuring ourselves,” he says

The other great challenge the country faces is environmental pollution which, in Barnés Regueiro’s opinion, has mostly been left out of the agenda. “Our cities are still very polluted, and the expansion of urban areas has brought about a series of issues which have to be solved, such as air quality. We have to strengthen monitoring to know when we are exceeding contamination levels and create the required policies to reduce pollution.” 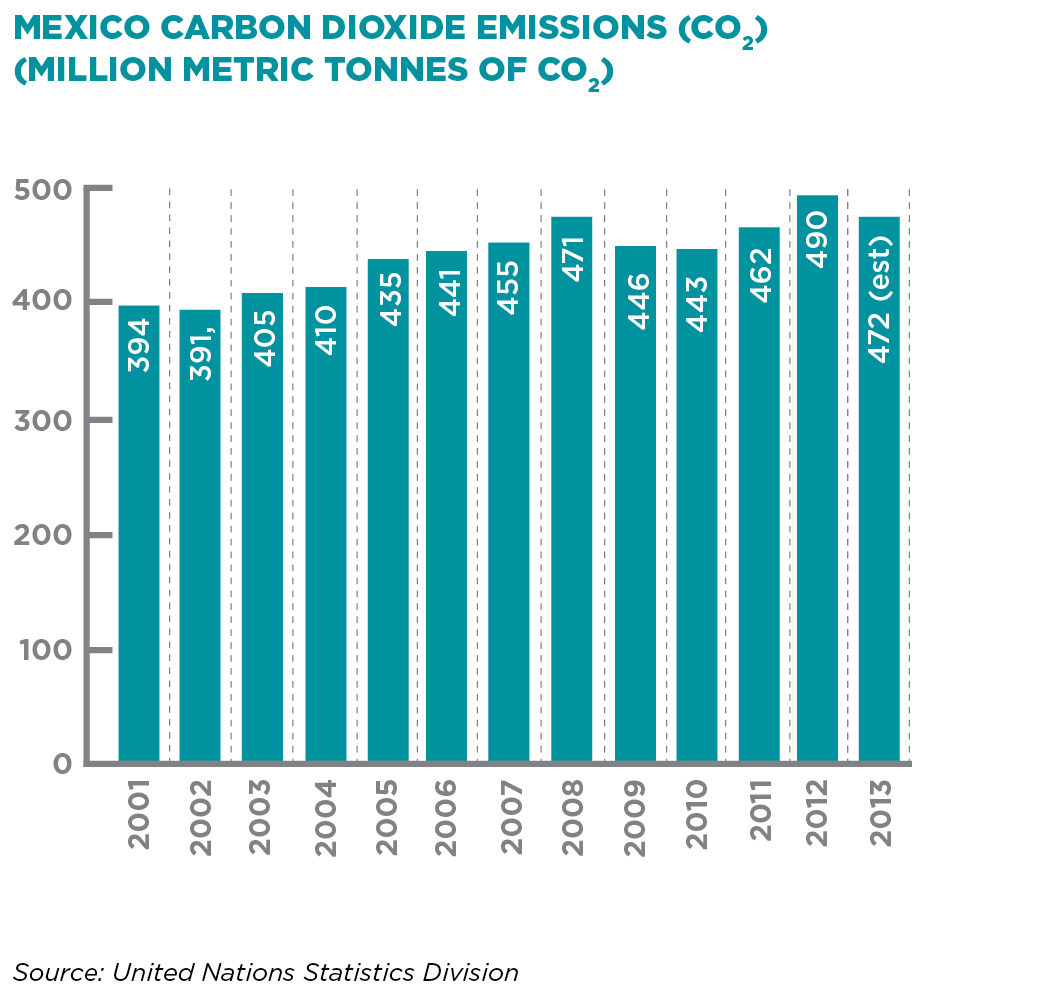 NEXT STEP: ADAPTING NORMS FOR MEXICO

Even though the Mexican authorities have taken decisive steps to face climate change, there is still a lot to be done regarding normativity, Barnés Regueiro says. “We need to change many regulatory frameworks. For example, changes in the regulatory framework have enabled the growth of renewable energy. The self-supply scheme defined by CRE has made the use of renewable energies feasible.”

But a large quantity of norms need to be adapted to Mexico’s current situation. Barnés Regueiro is optimistic, pointing to the introduction of a norm regarding the efficiency of new automobiles, which looks to standardize the Mexican market with its American counterpart. “We will apply the same norms, not just regarding CO2 emissions but also energy safety, because it will reduce fuel demand in Mexico.” However, air quality and fuel quality norms still need to be updated.

Part of this agenda would be to tackle the revision of energy and water subsidies, which have strong economic implications and an environmental impact. In Barnés Regueiro’s opinion, if energy is almost free, there is no incentive for optimization, usage goes up and subsidies are not directed to the most vulnerable sector of the population. “The poorest people of the country only receive 6-7% of the fuel subsidy, for example. Subsidies are very costly for Mexico, they need to be revised while the government searches for a better way to provide them to those who really need them.”

In 2011, INECC analyzed fossil fuel and electricity subsidies and the figure came to MX$289 million (US$25 million), which, according to Barnés Regueiro is more than all social programs directed to the most vulnerable segment of the population. “We need to modify the legal framework, but the real challenge is creating economic and fiscal incentives, as well as providing the market with clear signals to move from polluting energy to clean, renewable energy,” he adds.