Optimism surrounds the electricity sector due to the Energy Reform, which will allow increasing productivity and investments in the segment, ultimately promulgating Mexico’s economic development. The Mexican economy is expected to awaken from its lethargic stage in the next few years, even in the face of the currently low hydrocarbon prices, which are intesifying the attractiveness of natural gas in the energy mix while having a negative effect on the competitiveness of renewables. Nevertheless, according to data from the IEA, 60% of the investments aimed at the development of energy infrastructure will be allocated to green energy sources following a combination of countries pledging to decrease emissions and the continuing shift in the cost of renewable energy toward price parity with hydrocarbons. This is expected to reduce the global dependency on fossil fuels over the long term. Mexico has opted to limit the use of oil and its derivatives, which not only reduces power generation costs and benefits the environment, but also mitigates potential future risks for the sector through diversification. Mapping the future development of Mexico’s electricity market requires analysis of economic variables and fuel prices, as well as the needs of the population and the impact of the implementation of energy efficiency technologies and incentive programs.

FOUNDATION OF THE MEXICAN ENERGY STRATEGY

Variations in the GDP have been relatively moderate over the past decade, following a period of stagnation between 2001 and 2003. Optimism regarding the country’s economy grew afterward, until the dawning of the 2009 global recession. Mexico’s electricity market forecasts up to 2028 are based on an expected annual GDP growth rate of 3.5% combined with a 1% annual growth of Mexico’s population of 112.3 million inhabitants based on the country’s 2012 census. The model considers two pricing scales to estimate the behavior of demand patterns. The first is the price of fuels that is subject to fluctuation based on global supply and demand, while the second is the price of electricity in the country.

Based on the forecasted 3.5% GDP growth, energy demand is expected to increase at an annual rate of 4.4%, almost one percentage point above the growth recorded in the last decade. Over the past few years, the industrial sector has been the largest electricity consumer. The industrial sector is expected to grow by 4.5% per year, representing 61.8% of sales in the wholesale electricity market by 2028. The residential, commercial, and services segments are anticipated to grow by 3.9% annually; however, the residential segment’s annual growth rate is expected to shrink. The agriculture sector is growing at a yearly rate of 1.2%, a considerably low rate compared to the 3.4% recorded in the previous decade.

In 2013, electricity consumption in the National Electricity System amounted to 277.6TWh, and this figure is expected to reach 502.9TWh by 2028. Mexico is divided into nine regions composed of 149 zones, 6 exploration areas, and 11 isolated systems, which facilitates evaluation of the needs of each section. Calculating the electricity requirements of each section is an important variable when determining the capacity and location of new power plants.

In the process of planning the expansion of the grid, it is important to first evaluate and predict the impact of private projects on the grid. Obtaining this information is a complex process, and projects must be evaluated on a case by case basis by compiling the total value of the local loads and the remote loads. Afterward, these amounts are then added to the public demand in accordance with the different regions of Mexico. The results show that the annual self-supply load grew by 5.8% in the 2003-2012 period, while the remote self-supply load attained an annual average growth of 18.4%. For 2013-2028, the local and remote loads are forecasted to increase by 1.6% and 8.9%, respectively. When renewables are added into the mix, the remote load reaches 10.2%. In 2013, the impact of remote renewable energy projects began to be felt in the self-supply load, which started out with 3,379MW and reached 5,674MW in 2015. From 2019 onwards, groups of self-supply loads derived from renewable energy will be called Renewable Energy Blocks. It can be noted that there is a considerable peak in the 2016-2018 period that can be attributed to the interconnection of renewable projects under the legacy scheme, the implementation of Clean Energy Certificates (CELs), and the fact that also by 2018, at least 5% of energy consumed by users and companies in the wholesale electricity market must come from clean energy sources.

In order to keep the National Electricity System efficient and cost-effective, the authorities have planned the retirement of 15,840MW between 2015 and 2020. By the end of 2012, 19,457MW of installed capacity came from plants operating for over 25 years, and 15,317MW came from plants over 30 years old, representing 36.6% and 28.8% of the total installed capacity, respectively. In order to delineate the development of the power generation system, the authorities established a decommissioning program based on the facilities’ generation costs and years of operation. Some of these facilities include Puerto Libertad U1-U4, Topolobampo II U2 and U3, Mazatlán II U3, and Río Bravo U3. CFE’s Unit Decommission Program states that 465MW is expected to be taken offline in 2015; however, the government acknowledged that only 39MW was decommissioned in the first seven months of this year.

Thermoelectric power plants and facilities powered by gas turbines over 30 years old will be decommissioned, according to the plan. However, some conventional thermoelectric centrals that are now powered by fuel oil will be converted into dual-generation facilities so that they can operate on natural gas in the meantime. Plant rehabilitation seeks to improve and modernize insulation, cooling, control, and protection systems and are aimed at increasing a power plant’s reliability, working life, availability, and efficiency. In some cases, efficiency levels can increase by 17%. Recently, a rehabilitation program was completed in the Laguna Verde nuclear power plant, with units 1 and 2 increasing their capacity by 122.6MW each. Poza Rica units 1 and 2 are undergoing the process of becoming combined cycle plants in order to increase their efficiency by 16.8%, while the performance of the El Sauz combined cycle plant will be enhanced by 9.4%. Rehabilitation and modernization operations in hydroelectric power stations will see the installed capacity expanded by 97.1MW, not only increasing efficiency levels, but also leading to an additional 590GWh per year. CFE is assessing the possibility of converting other thermoelectric plants into combined cycle plants, particularly Río.

Bravo U3, Francisco Villa U4 and U5, Topolobampo II U1 and U2, and certain units in CT Tuxpan. Overall, the rehabilitation endeavors are poised to increase the availability of CFE’s thermoelectric park over the next 15 years. In 2013, the availability index was estimated at 87.8%, a number that is now estimated at 88%.

The capacity of the National Electricity System totaled 53,114MW in 2012, but is expected to reach 95,342MW by 2028 based on the addition of 55,550MW, the decommissioning of 13,322MW, and additional privately sponsored projects will add 9,582MW. According to these predictions, the grid will have a 107,503MW capacity by the end of 2028. Private local and remote projects will contribute with an additional capacity of 11,020MW, so the National Electricity System is forecasted to have a total capacity of 113,708MW by 2028. At that moment, natural gas-based technologies are expected to constitute 47.1% of the energy mix; renewables will amount to 27.6%; fuel oil, diesel, and coke will see their participation reduced to 2.8%; and coal will also see decreased participation, constituting just 4.2% of generation. Conventional and new clean generation technologies, including nuclear, will represent 40.3% of the electric sector’s capacity.

EXPANSION OF THE NATIONAL ELECTRICITY SYSTEM

The expansion strategy for the national grid is based on both the demand outlook and the locations of the new power generation and transmission plants that the system will require to meet the demand increase. Two fundamental aspects cannot be overlooked. The first factor is time, since the projects related to the expansion of the grid can take years to fully mature. The time between the moment a generation facility is tendered and the moment it enters into commercial operation can extend up to seven years, while transmission projects can take three to five years to enter the operational stage. The second factor to consider is that the decision to expand the grid has long term economic repercussions since these projects have life cycles that extend over 30 years. Expansion plans are no easy undertaking, since they require updated information of all generation and transmission projects that can be incorporated into the program. This information is sourced from studies carried out by CFE and other specialized sources, and with this data it is possible to catalogue feasible projects in accordance with technical information, technology, and costs.

The Ministry of Energy and CFE carried out studies that indicate that, in order to satisfy the electricity demand for the next 15 years, an additional installed capacity of 54,950MW will be needed. Of this amount, 4,848MW is currently under construction or being tendered, the remaining 50,102MW corresponds to future projects, while rehabilitation and conversion initiatives will contribute with an additional 600MW. Of the installed capacity to be added in 2014-2022, almost 24% will consist of non-fossil fuel powered plants, while 76% will operate on fossil fuels. For the latter, combined cycle plants represent 72% of the additional capacity. For the period between 2023 and 2028, an additional 26,955MW are expected to meet the demand, of which 47% is expected to come from new clean generation technologies, followed by combined cycle plants contributing 40%. 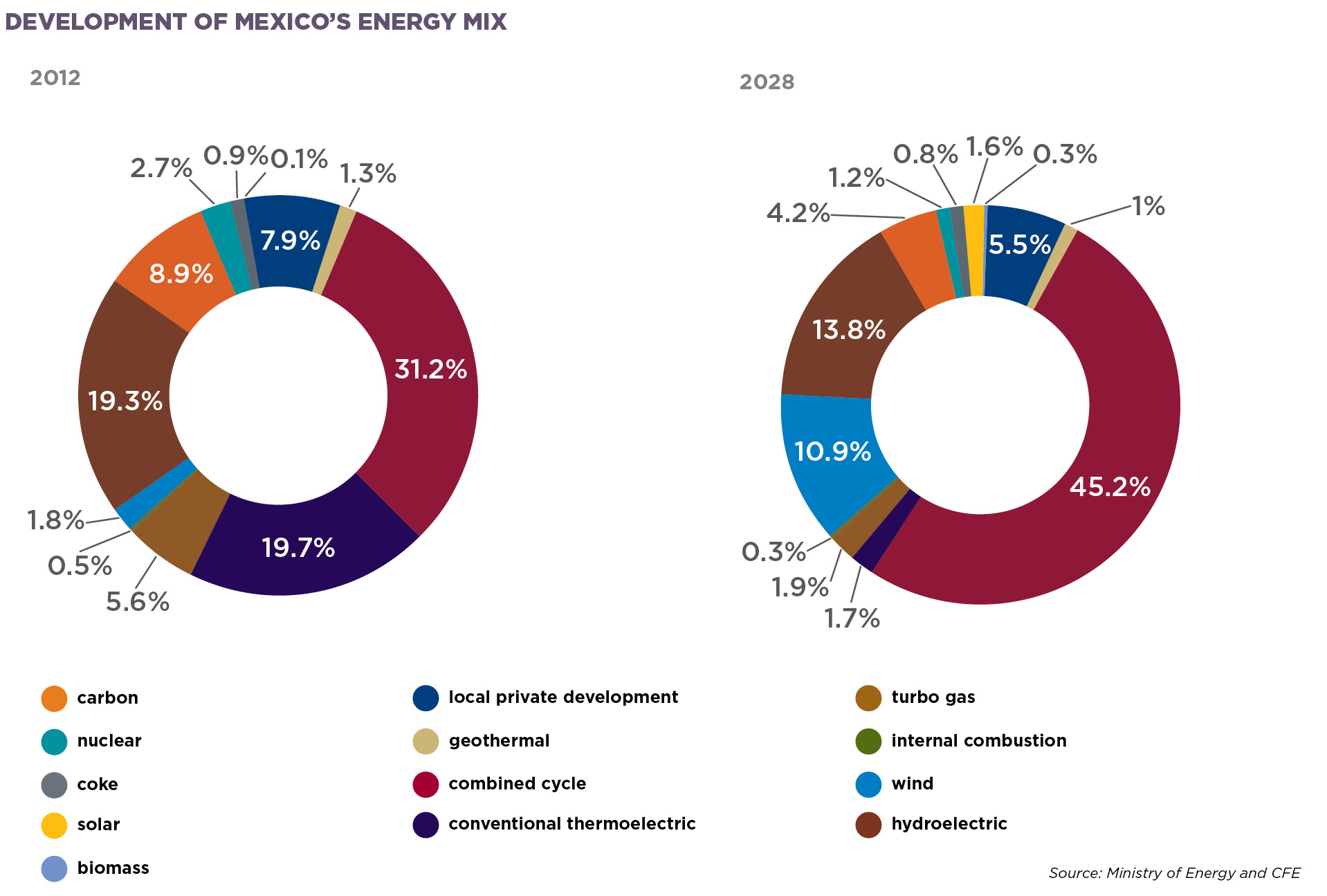