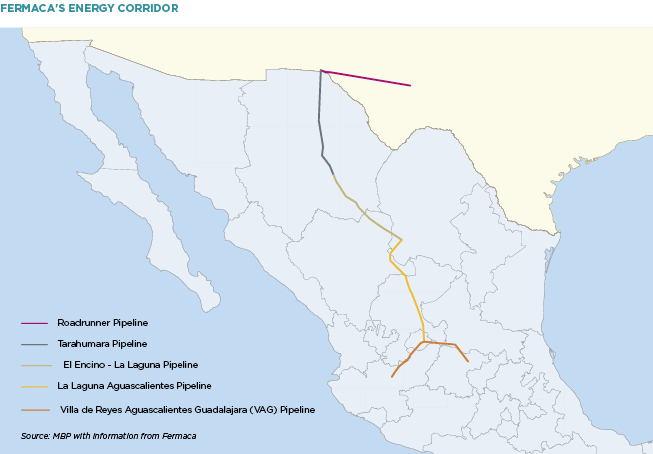 The expansion of the Mexican natural gas transportation system has been moving at a quick clip as Mexican industries demand more of the cheap fuel. The revamping of the country’s power system, substituting old coal or fuel oilburning plants for natural gas-powered plants has also driven the construction of more and larger pipelines in the country.

National and international EPC companies have been involved in this process and can now capitalize further as the Energy Reform opens the door to supply the molecule openly to private natural gas marketers or large energy users.

Fermaca, a Mexican EPC and energy services provider, has been preparing for this moment since it started working on the construction of the Tarahumara pipeline in Chihuahua, looking to integrate a system capable of bringing cheap US natural gas to Mexico’s high-demand regions such as El Bajio, which is brimming with large automotive manufacturers.

“Our competitors may be bigger but our success is based on the integration of a system of several gas pipelines. We are connected from the cheapest production source in Waha, Texas with the pipeline we just put into action with ONEOK, the Roadrunner Project, representing an investment of about US$500 million and which can initially move 500 million cubic feet per day,” says Fernando Calvillo, Chairman of the Board of Fermaca.

“We have also integrated the Tarahumara gas pipeline that has been in operation for three years. We are in the final phase of construction of El Encino-La Laguna, which is the continuation from Chihuahua to the Laguna region. The first phase was put to work two months ago and soon we will start phase two. Now we are processing rights of way and environmental permits for the region from La Laguna to Aguascalientes. We also have the project Villa de Reyes-Aguascalientes-Guadalajara that we internally call 'the VAG,'” he adds.

“Other companies looked to build all the pipelines they could through the tenders. We tried to do something integral. This makes us stand out from the National Gas Pipelines System. To bring gas to Guadalajara, we do not need transportation services from anyone else because we own all the pipelines along this path. Few systems globally go from point A to B, but we go to point A to B to C. If we meet our projections, by early 2018 Fermaca should be operating 2,200 km of gas pipelines, something unique. This energy corridor will ensure long-term capacity to any user. For instance, if a power plant wants to settle near our corridor we can provide capacity for the next 20 years and offer them the molecule from the cheapest gas source in the world, which is the Waha hub,” Calvillo says.

Calvillo adds that Fermaca is well-prepared to serve companies located along its energy corridor as they have a clear knowledge about these industries and their energy needs, adapting its offer to each particular client. “Every user is different and the gas volumes and the commitment we make are the means we use to establish a tariff profile. We are a regulated company. We cannot charge more than the maximum rate set by CRE but it does not mean we cannot give discounts. We usually give these advantages to larger users. If they consume a lot of gas they should get a special price. Also, the law mandates our pipelines to offer open access. We cannot discriminate against anyone who wants to connect as long as their conditions are economically and technically viable. The company is happy to receive the highest number of consumers as possible," he says.

To be ready to provide services when the timing was right, Fermaca built bigger pipelines than those required to meet its commitments with CFE resulting from the projects it was awarded through the state-owned utility’s tenders. “We looked to the future with all the projects we won. We became more competitive by taking market risks and thinking that the returns would come with more clients. We have a longterm vision with this type of infrastructure because pipelines will remain underground for the next 30 to 40 years. Once you bury the tubes, they are not coming out. Even though competing with larger companies is not easy, our philosophy consists of betting on the future,” says Calvillo.

Even though Fermaca already has an attractive set of assets in Mexico, it wants to go further by continuing to invest in different infrastructure projects for both the Mexican and US hydrocarbons markets. The company’s vision is to become the largest natural gas transporter in the world. By early 2018 Fermaca expects to have US$1.2 billion already invested in this sector as a first step to reach the goal of having US$20 billion in assets by 2020, stated in the company’s expansion program known as FERMACA 20/20. Calvillo acknowledges that the company’s goals are ambitious considering the short period and large investments required but Fermaca believes it is ready to take on this challenge.

“Now that CFE has finished granting the tenders and we know we will not see gas pipelines with big diameters for the next five to seven years, we are betting on connecting big gas corridors between the US and Mexico and expanding to other cities. We are very focused on liquids and terminals. The company is developing a regional project that includes hundreds of new pipelines in the country. We will start developing next year but we will remain active in midstream where there are still a lot of opportunities,” he says.

To ensure their current projects remain in perfect shape to provide continuous service along its energy corridor, Fermaca is also paying attention to O&M services. “We are very careful with maintenance and we spare no expenses. We are also installing the most modern system in pipeline operation, consisting of a unique SCADA (Supervisory Control and Data Acquisition) that opens and closes the valves via satellite communications. It is difficult to know what happens underground where pipelines are buried so we have various methods of control. For instance, we have people in the field to verify that no one is building on top of our rights of way. The most common accidents worldwide involve a tractor operating above a pipeline, plowing and accidentally hitting a tube. The pipelines also have cathodic protection — an energy flow that prevents the tubes from rusting —v as well as fusion bonds, also known as anti-corrosion coatings. Every year we randomly open a part of the pipeline for integrity checks and in 14 years we have never been close to an accident. Our new program also includes drones that monitor the area and notify us of any possible incident,” he says.

Calvillo is satisfied with the advances brought about by the Energy Reform and the opportunities it has created in the natural gas sector and he expects to contribute to moving this process forward. “We are in the golden age for natural gas and we have to take advantage of the fact we have access to the cheapest gas molecule in the world,” he says. “Mexico has a lot of potential. We should work together and continue supporting the reform because in the end we all want to see a better Mexico.”