The “Getting It Right” report published in 2013 by the Organization for Economic Cooperation and Development (OECD) found that energy subsidies represented around 1.7 percent of Mexico’s GDP during 2005-2009, including electricity subsidies for the residential and agricultural sectors. In addition to being costly, the existence of energy subsidies can discourage investment in clean energy and efficient technologies, which goes against Mexico’s future ambitions.

Roberto Martínez, Director of the OECD Mexico office, believes the electricity market’s liberalization is the best opportunity for the country to start phasing out energy subsidies and place them in areas with higher potential to benefit its population and move Mexico’s clean energy ambitions forward. “In the power sector, we consider it essential to follow an energy efficiency agenda, for which reshaping the country’s strategy regarding energy subsidies and taxes is necessary. Before the Energy Reform, we conducted an in-depth study to evaluate the impact of phasing out energy subsidies and to identify the optimal areas in which to invest these financial resources,” says Martínez. 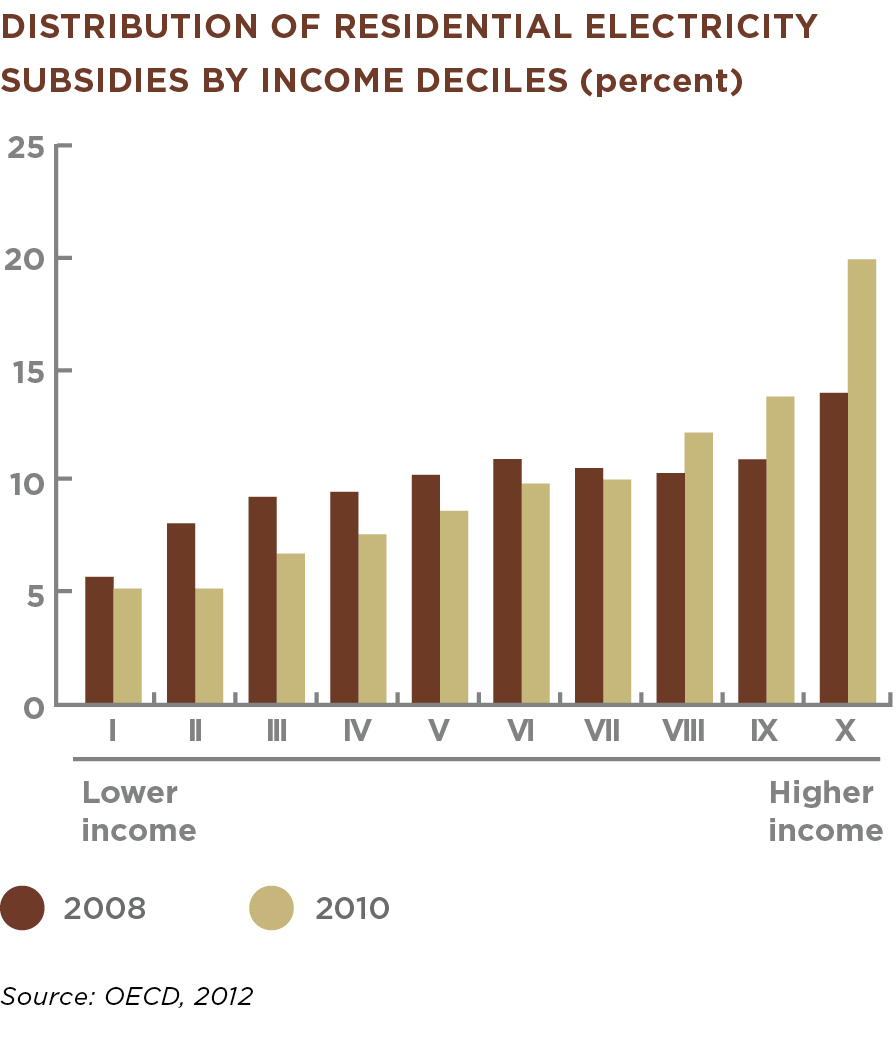 The OECD believes that eliminating these subsidies and replacing them with specific programs would be more effective for addressing poverty. The country has already made some advances in this regard by substituting electricity subsidies for water pumping with cash incentives in watersheds where they are needed the most. The organization encourages the adoption of effective communication strategies to promote the acceptance of programs that reduce subsidies but Martínez also says the Energy Reform might provide the right framework to ease the transition process.

“Mexico has already reduced its industrial electricity tariffs, making the gap smaller in comparison with American standards. A similar drop in residential tariffs would set the ideal timing to start phasing electricity subsidies out, which is more relevant than ever as they can distort the market by artificially changing prices,” he says. The current subsidies also affect the development of clean energy technologies in Mexico because they favor mostly fossil fuel technologies. According to the OECD, Mexico’s fossil fuel subsidies accounted for US$8.95 billion in 2011, representing around 88 percent of the country’s total energy subsidies. Martínez says that reshaping the fiscal strategy would have a positive impact on the country’s clean energy industry and would be more in line with global energy trends. “The maturing of renewable technologies worldwide has driven us to design a policy framework favoring the rapid adoption and implementation of clean energies, including tools to make them more economically attractive,” he says.