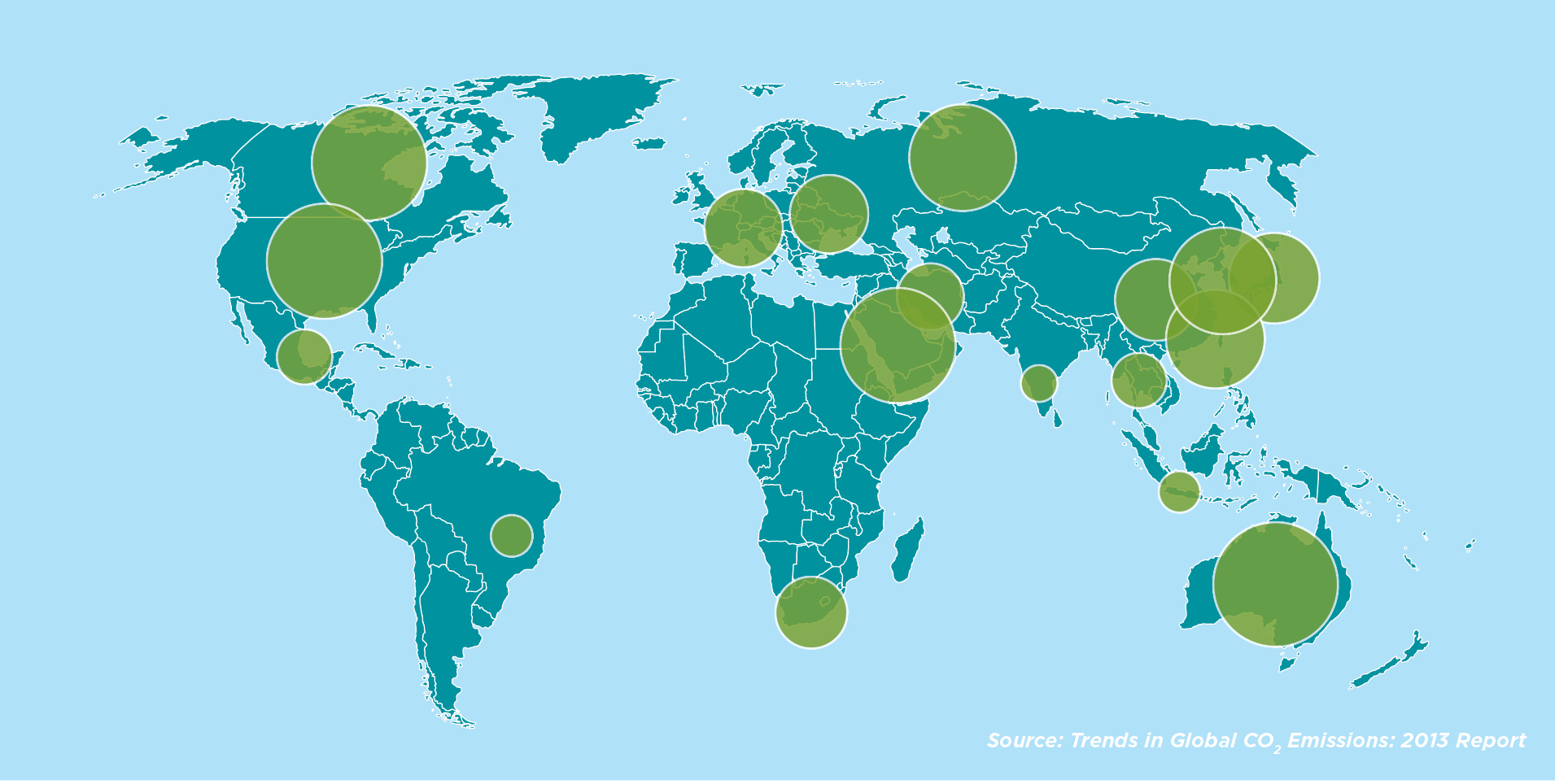 While the United States can claim some solace in knowing it is no longer the world’s biggest emitter of CO2, its per capita emissions remain twice as high as China’s. The world’s leading economy pumped out 16.2 tonnes of emissions per person in 2012, as opposed to 7.1 tonnes in China. Longstanding environmental policies have helped the EU mitigate its contributions, limiting itself to 7.4 tonnes per person, proving to other developed countries like Canada (16 tonnes per capita) and South Korea (13 tonnes) that it can be done. A stern finger can be pointed at Australia, whose long-term political tussle over forming and sticking to a real climate change strategy seems to have stumbled, with the country topping the rankings with 18.8 tonnes of CO2 emissions per capita. This exacerbating situation, where smog from China is now beginning to cloud cities in neighboring countries, like South Korea and Japan, seems to be finally taken seriously. The Chinese central government, backed up by its major cities, announced a package in 2013 that will stretch into the billions of dollars to reduce carbon emissions in its heavy industrial sector. Once again, the Asian economic boom led to the region being a global hotspot for pollution, as worsening conditions in many of the continent’s cities attest to. But meanwhile, Latin American leaders performed creditably, with Mexico and Brazil putting out 4 and 2.3 tonnes per person. These per capita figures also seem to help reveal the disparity within the BRICS concept, as Brazil and India’s emissions are dwarfed by their partners in the popular classification. 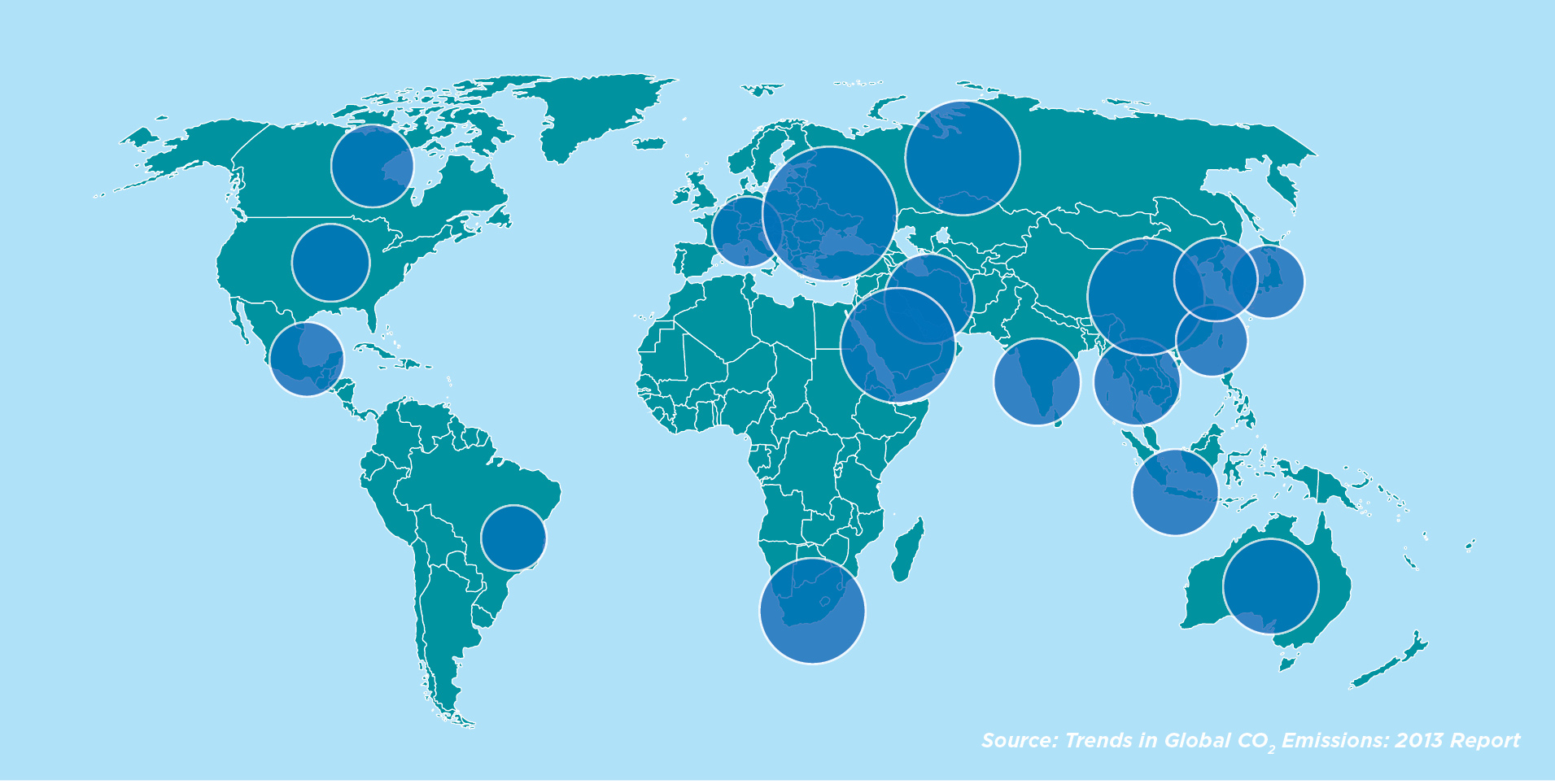 Whereas China may have led total CO2 emissions in 2012, with Australia contributing the highest total per capita, neither of these had the costliest economic growth in terms of pollution. With a massive 1,107kg of CO2 being emitted for each US$1,000 of GDP growth, the Ukraine is found far outpacing the pack. A lack of firm environmental regulations or modernization policies left the country ranked 102 out of 132 countries in Yale University’s Environmental Performance Index 2012. When CO2 emissions are divided by national GDP growth, a truer picture about the state of industries in various countries emerges. Where Mexico pollutes far less than the US when total or per capita emissions are taken into account, this third measure narrows the gap. Mexico emitted 319kg of CO2 for each US$1,000 of GDP growth, the US put out 384kg, while Canada beat them both with 446kg. This combined performance leaves the North American trio paling when compared to rivals like the EU and Brazil, which emitted 265kg and 225kg of CO2 emissions respectively. But the combined performance of the NAFTA bloc remains positively pristine when compared to Saudi Arabia and Russia. Thailand, Taiwan and South Korea also contribute to a grim Asian context. The traditional dominance of the northern hemisphere in terms of pollutants remains the case, given the lion’s share of major economies based there. However, the southern hemisphere is now seeing real contributors of its own. Africa is not spared the rod with its major economy, South Africa, putting out 659kg of CO2 emissions for every comparable unit of GDP growth. 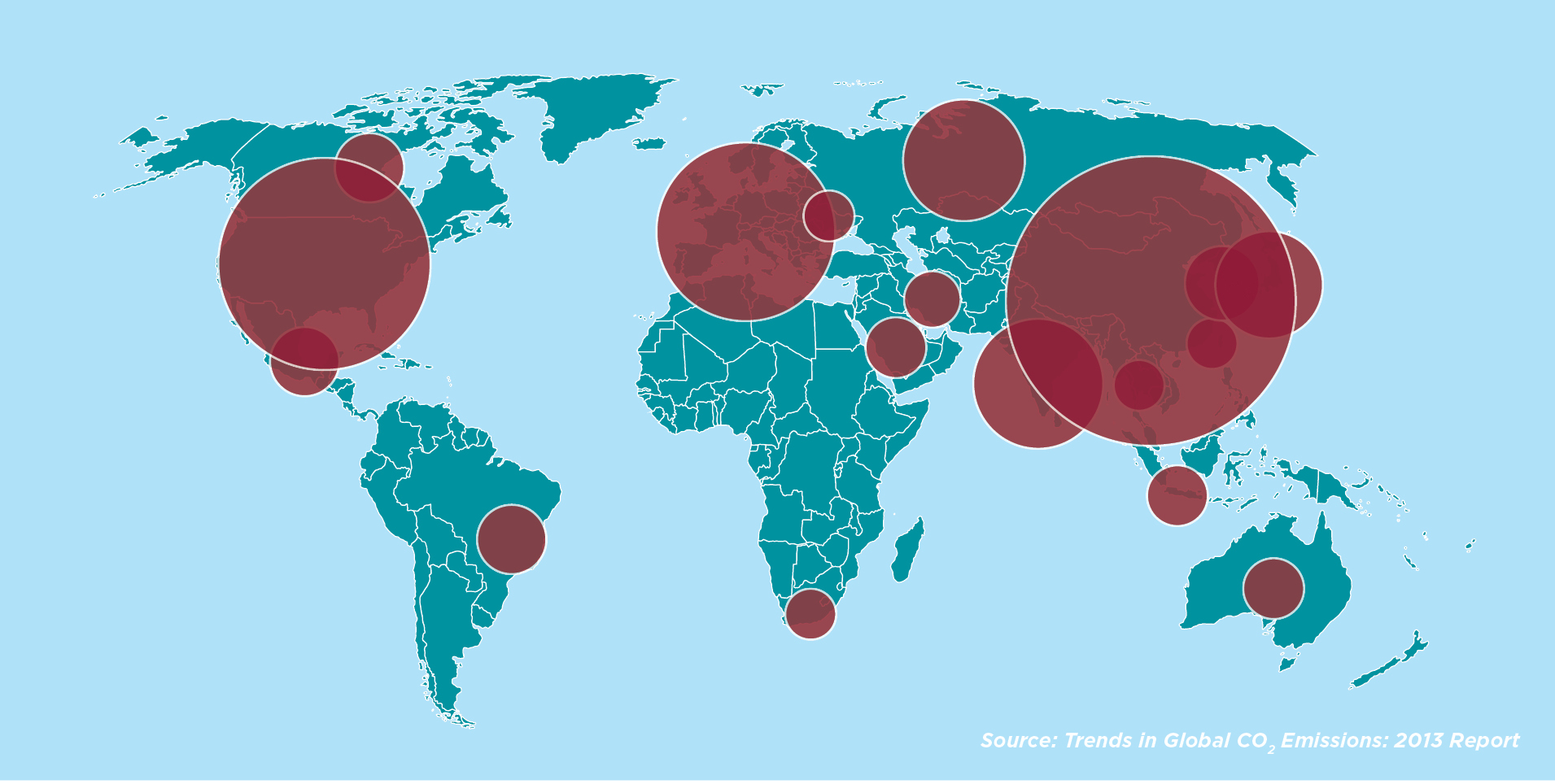 The complaints that accords like the Kyoto Protocol are meaningless unless ratified by major polluters are brought into sharp contrast when looking at which countries were the largest CO2 emitters in 2012. China leads the world, with its continued rapid pace of industrial growth, coming at a cost of 9,860 megatonnes of CO2 emissions being belched out into the atmosphere. It also leads a polluting pack across East and Southeast Asia, with India weighing in with 1,970 megatonnes of its own, and even Japan is found wanting with 1,320 megatonnes. Across the Pacific, the US was the 2nd largest polluter with 5,190 megatonnes, 28% more than the EU bloc combined. These figures do reveal an inconvenient truth, namely that the developing world’s claims that developed countries should take on a heavier burden to fix the environment, due to past emissions, rings hollow when looking at emissions in absolute terms. The second-tier of emitters includes economic powerhouses in both the developed and developing world. Mexico and Indonesia both emitted 490 megatonnes of CO2, ahead of Brazil and Saudi Arabia on 460, and Iran on 410. Whereas some of this growth is down to countries finally having economic clout but without the accompanying sense of environmental awareness, others cannot so easily shift the blame. Australia contributed with 430 megatonnes, a total that is likely to worsen in future years, given the pro-business stance of the current administration. All this proves one major claim, the only way to reduce emissions is by doing it together.