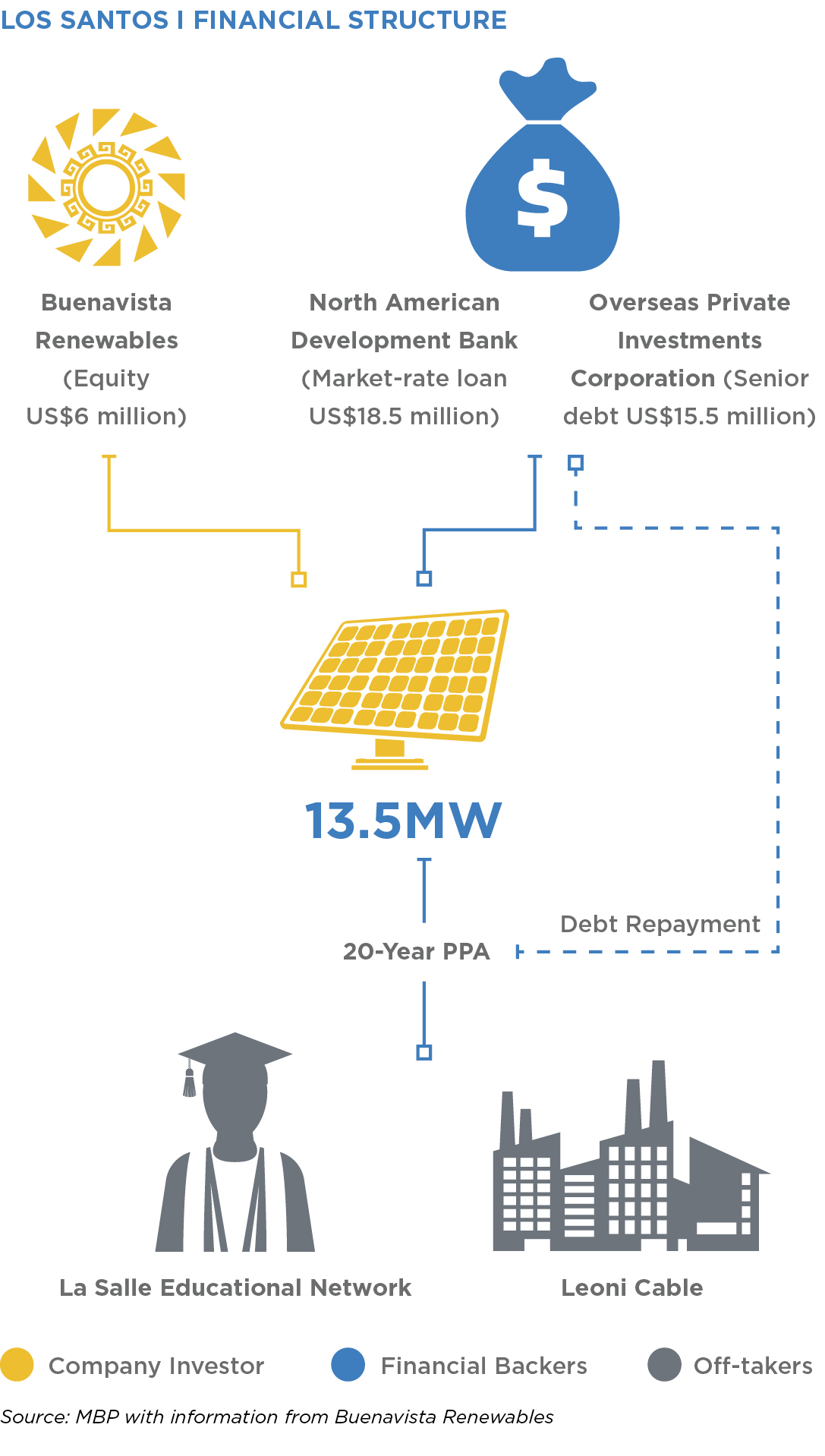 Los Santos I is the first utility-scale solar park in Mexico to secure a long-term PPA with private off-takers. The 13.5MW project, located in the northern state of Chihuahua, is expected to generate enough power to supply the equivalent of almost 6,000 homes while also offsetting carbon emissions.

Texas-based Buenavista Renewables developed the project. The installation of the 52,000 polycrystalline PV modules from AstroEnergy was handled by IMASA Ingeniería y Proyectos México, using single-axis tracking systems from NEXTracker and electrical equipment from Chint and Schneider Electric. The project also required a switchyard to connect Los Santos I to CFE’s Moctezuma substation.

Buenavista Renewables designed the project’s financial model and secured agreements with La Salle and Leoni Cable, the off-takers. Also involved in the financing was the North American Development Bank (NADB) and the Overseas Private Investment Corporation (OPIC), direct lenders to the project. Buenavista signed a US$18.5 million loan agreement with NADB in August 2015. OPIC contributed US$15.5 million in the form of senior debt while Buenavista Renewables’ US$6 million equity stake made up the remaining funding. The cost of the project totaled US$40 million.

The correct estimation of power production was crucial for securing financing because electricity sales were established as the company’s vehicle for repaying its debts. According to NADB’s documents, an independent evaluation performed by a third party estimated the project would produce 40.1GWh during its first year of operation, which was consistent with revenue estimations. That output can power 5,838 houses and has the potential for offsetting 16,509 tons of CO2 per year.

Having trustworthy off-takers and a sound PPA was also crucial for closing the deal. Buenavista Renewables signed a 20-year PPA that was in line with the 18-year repayment period established by the banks and the project’s 25-year estimated life span. The PPA was based in dollars to avoid currency risks. Leoni Cable, which will purchase most of the project’s power production, is a leading manufacturer of cables for the automotive industry, a sector expected to grow substantially in Mexico.

Los Santos I started operations in April 2016 and was built on private property, easing the land rights acquisition process. The company established a leasing contract with the land owners in June 2014, including the permits to interconnect to the project’s transmission line. Prior to signing the loan agreement, the project also had its Environmental Impact Assessment (MIA) approved by SEMARNAT, received generation permits from CRE and the land’s release from the National Institute of Anthropology and History (INAH). This legal headway also contributed to the attractiveness of the investment.

After evaluating Buenavista Renewables’ proposal, the banks concluded that the estimated revenues were enough to cover the project’s O&M costs, pay senior debt and interest on debt reserves while complying with the 187 debt coverage ratio. NADB rated the investment a low risk thanks to the experience of the companies involved and the strong project proposal in terms of technical feasibility, repayment vehicle and advanced bureaucratic processes.