A Market on the Rise

Higher electricity prices and a more transparent market, along with new resolutions from CRE have supported a boom in distributed generation, but overall progress remains a concern for an industry that sees much potential that has yet to be unleashed

Progress, however, has been slow due both to previous market traits and sluggish communication between regulators. Before 2015, the fact that electric tariffs were lower than they should have been hindered the market, both in the industrial and commercial sector, says Luis Cano, Director General of Grupo Trinova. This “rendered investment in renewable energy alternatives unattractive from a financial standpoint, as the ROI oscillated between 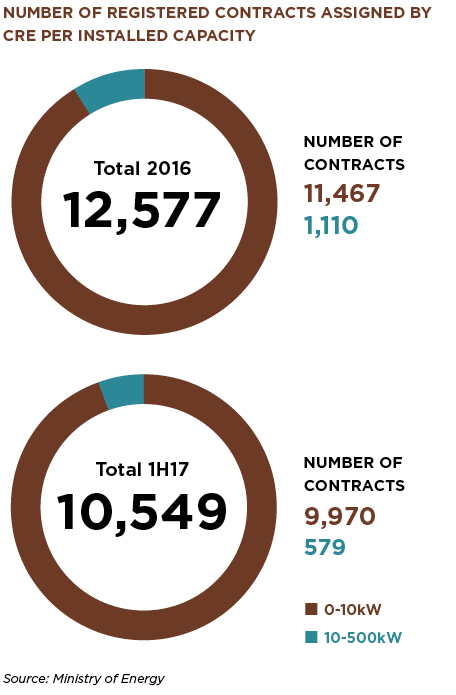 eight to 10 years.” Now, although CRE’s objective is to foster a competitive market in which more participants can play, the fact that CFE remains the only player in the transmission and distribution area has slowed the interconnection of distributed generation projects once the contracts have been assigned. “The main problem in this area is the lack of communication between CRE, CENACE and CFE,” says Andre von Frantzius, Commercial Director at Grupo DESMEX. “It has not been an easy road. The Energy Reform is moving, but it has been slower than we expected.” Von Frantzius also says it is critical for all market members, from the public to private spheres, to work together and create proper communication channels that work for the benefit of the entire industry.

Associations are one way to gather different points of view and address concerns, with the objective of distilling and channeling them to the appropriate decision-makers. Such is the case of ASOLMEX, explains José Zambrano, Director General of Galt Energy. The association allowed Galt and other high-level companies with a strong and positive long-term vision to take part in close conversations with CRE and the Ministry of Energy, with the objective of offering them enriching and constructive input about their activities. This was especially useful when CFE acquired legal protection against the interconnection rules published by CRE, Zambrano says. “ASOLMEX sat with CFE to understand the reasons behind the agency’s action and how it could be worked out. Instead of burning bridges we looked for a way to fix the problem. CFE was not able to handle so many interconnections in such a short time as no company can deal with a major change in core activities in just a couple of days. After those talks, both CFE and us — the companies involved in distributed generation — were ready to keep working together. We recognized that the legal protection for CFE was necessary and interconnections started to be handled much more quickly.” Zambrano also points out that these institutions have been respectful and open to the input of the industry's players.

The biggest market growth for distributed generation has been in the low-scale area, meaning the installation of power capacities of less than 10kW. As seen in the graph on the right, 94.5 percent of the assigned contracts during the first half of 2017 were for low consumption.

These capacities are a good fit for the residential and commercial sectors. As smaller projects are easier to sell at a faster pace, the growth in this segment is not surprising. Pedro Garza, Director General of Powerstein in Mexico City, explains how an external factor can increase the number of quotations. “The fact that electricity prices keep going up makes people understand that they need a better and long-term solution, which is where we come in.” He also mentions the importance of knowing the reality behind clients looking for a distributed generation project to be able to offer them the best value they can get, even if this means not installing the project right away. “When Luz y Fuerza del Centro disappeared and CFE took over the entire power grid, old metering systems were replaced by digital systems.” Old meters measured lower consumptions than their digital counterparts because they were wrongly calibrated, and as consumers got charged more, they looked for distributed generation to solve the problem. “This situation produced a boom in the number of quotations we had to make for angry clients who wanted to introduce off-grid power systems and get CFE out of their lives. When we explained that an off-grid system could cost up to MX$80,000 compared with only MX$40,000 for a starting interconnected system, our clients understood that it was better to pay off any debt they may have had with CFE and then come to us to interconnect a solar system.” This also illustrates how such a situation can be overall beneficial for a company, “Thanks to this social discontent, our sales are increasing every year.”

Although sales have risen for the majority of implementers of residential and commercial distributed generation systems, the lack of financial tools is hindering the widespread installation of projects. “For the moment, only two banks are lending money for these types of projects,” says Javier Romero, Director General of Eco Housing. He adds, however, that this situation is to be expected in a banking market that is just getting accustomed to, and starting to trust in, distributed generation. To help
banks finance more projects, it is crucial that project developers convince the financial sector that projects in the residential and commercial sectors are secure. “We have set out to show them that renewable energy is perfectly capable of cementing itself as a long-lasting industry, that the technology works as it has been working for the last 20 to 30 years in other countries and will continue to perform well in the future.” According to Jonah Greenberger, Co-Founder of Bright, the maturity of the Energy Reform has also helped in this regard. “We are now in a more transparent and certain market given the changes resulting from the Energy Reform. As a result, investors feel safer.”

In the first half of 2017, 5.5 percent of the projects were in the range of 10 to 500 kWs. These capacities are better suited to meet big commercial and industrial requirements. While the residential sector boomed during 2017, there is still much to do before distributed generation can extend its reach in the commercial and industrial sectors. Although the 500kW threshold has been effective, some companies find that it is holding back the development of more projects, and even the inclusion of innovative solutions in the country. “Our distributed generation projects can reach up to 3MW with medium-sized turbines of 1MW,” says Ignacio López, Business Development Manager Latin America of Emergya Wind Technologies. “If the regulations allowed it, Mexico could be a tremendous market for us.”

Although distributed generation has had its ups and downs and there is still much to do to broaden the implementation of these projects in a country where renewable energy sources are widely available in significant amounts almost everywhere, the country is in good shape for the implementation of more projects, explains Mario Muñoz, CEO of Solar Center. “Distributed generation will continue growing as long as Mexico’s housing and urban infrastructure continues to grow.”