The first natural gas distribution permits were granted at the end of the ‘90s and the beginning of the new century. For the winners of those first bidding processes, Mexico represented great potential for growth. The regulated businesses guaranteed the investments, strict safety standards and efficient operating conditions that would allow the development of the natural gas infrastructure in the country, in order to benefit the greatest number of homes, businesses and industries.

To take the first steps in this great endeavor, each of the companies dedicated hundreds of hours in meetings with neighbors to explain the characteristics and benefits of the service, the construction process to install the infrastructure, and to work toward demystifying some of the great fears that the arrival of a “new” service had among the people.

Twenty-six years after the first permits were granted for natural gas transportation and distribution in the country, the areas that benefited from these processes have begun to mature, and natural gas is part of the daily life of many companies and families in these areas. The Northeast and Bajío[1] regions of the country have been clear examples of industrial development and the positive impact on the economy and quality of life that the arrival of infrastructure and natural gas has had.

During the period from 2008 to 2018, Mexico’s Bajío area achieved a GDP growth rate higher than the national average and Foreign Direct Investment increased considerably, according to the Mexican Institute of Statistics and Geography (INEGI) data.

However, there is another part of the country where natural gas is still far away. It is desirable for governments seeking to improve the conditions of their territories but far from having a concrete solution to supply the fuel.

As of February 2022, according to the Prontuario Estadístico (Statistical Compendium) issued by the Mexican Ministry of Energy (SENER)[i], the country has 18,721km of transportation pipelines, but only about 7 percent of the population nationwide — still a very low number — has access to natural gas supply.

By comparison, according to data from the United Nations Economic Commission for Latin America and the Caribbean (ECLAC)[ii], in Argentina in 2016, 60 percent of households had access to the gas network and there were 138,200km of transport and distribution pipelines in the country.

According to data from the Mexican Energy Control Center (CENACE)[iii] more than 60 percent of the installed generation capacity in the country as of June 2021 depends on natural gas. Primarily because of its competitive price but also because of its environmental benefits that recognize it as the fuel of the transition by emitting less greenhouse gases compared to other fossil fuels.

According to data issued by SENER[iv], of the average demand of Integrated National Natural Gas Transportation and Storage System (SISTRANGAS) during 2020, 38 percent corresponds to this power generation, followed by 21 percent from the industrial sector, basically for the same reasons. 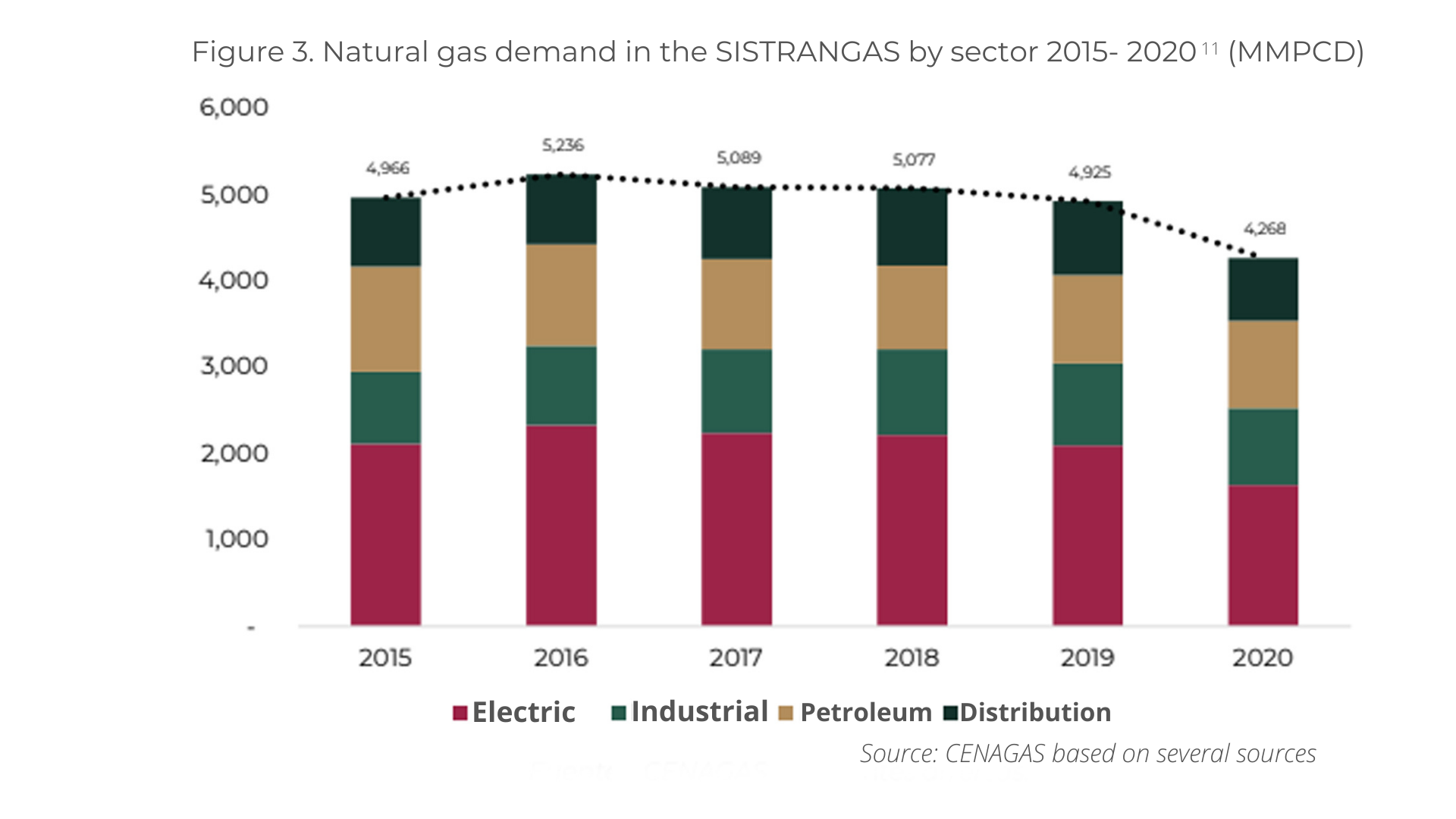 As can be seen in the graph below generated by SENERi, the price of natural gas is the cheapest of the available fossil fuels and, therefore, provides significant competitiveness to the industry. The peak indicated in February 2021 is the event generated by the winter storm in Texas. We can also observe the increase in liquefied natural gas costs derived from the geopolitical conflict in Europe.

The growth of natural gas infrastructure in the country.

The development of natural gas infrastructure, transportation and distribution has been intrinsically related to power generation. CFE has historically been the anchor offtaker for the expansion of the country’s much-needed infrastructure. In February of this year, it was reported that the Federal Power Commission (CFE) had awarded six new natural gas combined cycle power plant projects.

The announced plants are 327MW - Baja California Sur; 205MW - Gonzalez Ortega; 505-MW Merida III; 680MW- San Luis Río Colorado; and 1,061-MW Valladolid; 1,086-MW Tuxpan, Veracruz. This becomes an opportunity for more gas infrastructure to be triggered and provide supply to areas that so far have not had the opportunity to reap its benefits; however, although several announcements have been made in this regard, the issue of the gas pipelines that will serve some of these plants is still pending.

On the other hand, the natural gas infrastructure projects contemplated by SENERiv in the 2020-2024 Five-Year Plan have suffered significant delays, not only due to the pandemic but also to the lack of definition of who will develop the infrastructure and associated investments. In the revision of the second Five-Year Plan, the projects mentioned below are maintained with the following start-up dates: 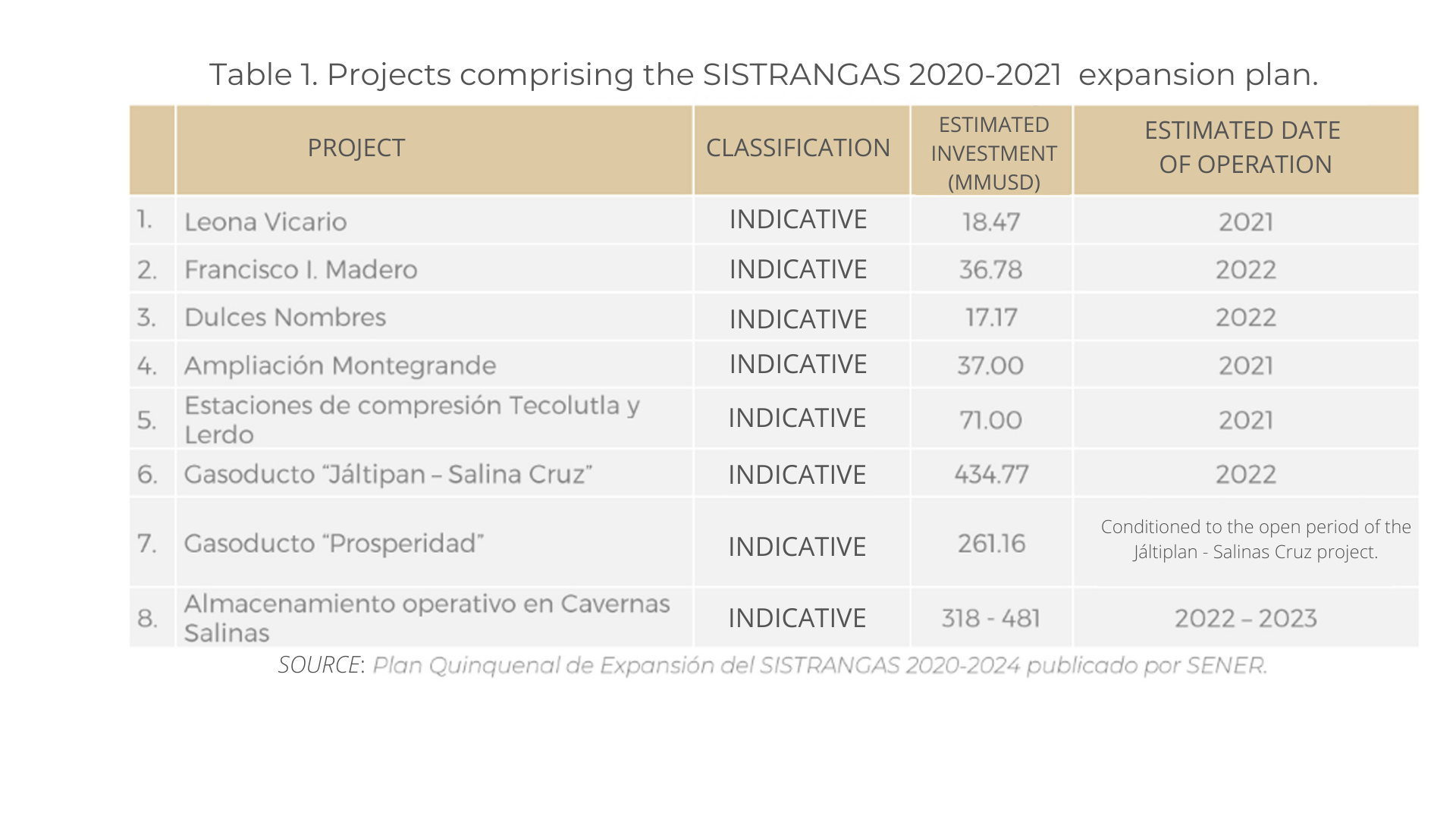 Challenges for the gas industry: ensuring access to all corners of Mexico

While some are concerned about the war between Russia and Ukraine and how this will impact future natural gas prices and are looking to establish hedges to mitigate their risks and optimize their costs and budgets, others are just beginning to hear what natural gas is all about and how it differs from the fuel they have historically used.

The gap in development and opportunities between the areas that seek access to natural gas and those that have it has had influence in attracting new investment and competitiveness in the different regions for Mexican industry.

Undoubtedly, despite the great development that has been achieved over the years, there are still issues to be resolved, such as the dependence on natural gas imports from the US, the undeniable need for storage exposed in episodes such as the Texas winter storm of 2021, and the country’s LNG export potential, among others. But we still need to take a step back and change the current reality for these states that have been isolated from gas networks or that have them but have not been able to receive the molecule.

What should we do to eliminate this limited access gap? How do we achieve this? By promoting infrastructure projects that would facilitate this access, sharing information about the benefits of this solution, seeking collaboration between the private sector and the government in projects for this purpose, so that these areas can finally have access to affordable, safe and environmentally friendly energy, creating the matching energy reality for Mexico.