Mexico is a country hungry for natural gas, especially since it adopted the resource as its transition fuel to clean energies. Although a fossil fuel, natural gas is notably cleaner than its counterparts, emitting 50 percent less CO2 than coal when burned. Of the country's total fossil fuels consumption, natural gas represented 44 percent of its matrix in 2015, making it the leading resource, according to the 2016-2030 Natural Gas Prospective, published by the Ministry of Energy.
It is expected that by 2030 natural gas consumption will increase by 20 percent compared to 2015 levels, driven mostly by an increase in demand from the electric and industrial sectors, whose respective consumption will increase by 52 and 40 percent from 2015 to 2030.

To cover the country’s natural gas demand, CENAGAS reported that, as of May 2017, there are 13,773km of existing pipelines, as well as 6,694km of pipelines under construction. CENAGAS also reported nine processing units and three regasification terminals, with a total capacity of 2.5bcf.
Natural gas is mostly required for power generation. Of the total natural gas consumption in 2015, 51 percent was used for electricity generation, and 18 percent was used for industrial processes, most commonly for the generation of heat. The three most consumption-intensive regions for natural gas — the northeast, the southeast and the center-west — are also the most industrialized and populated, therefore driving high natural gas consumption. 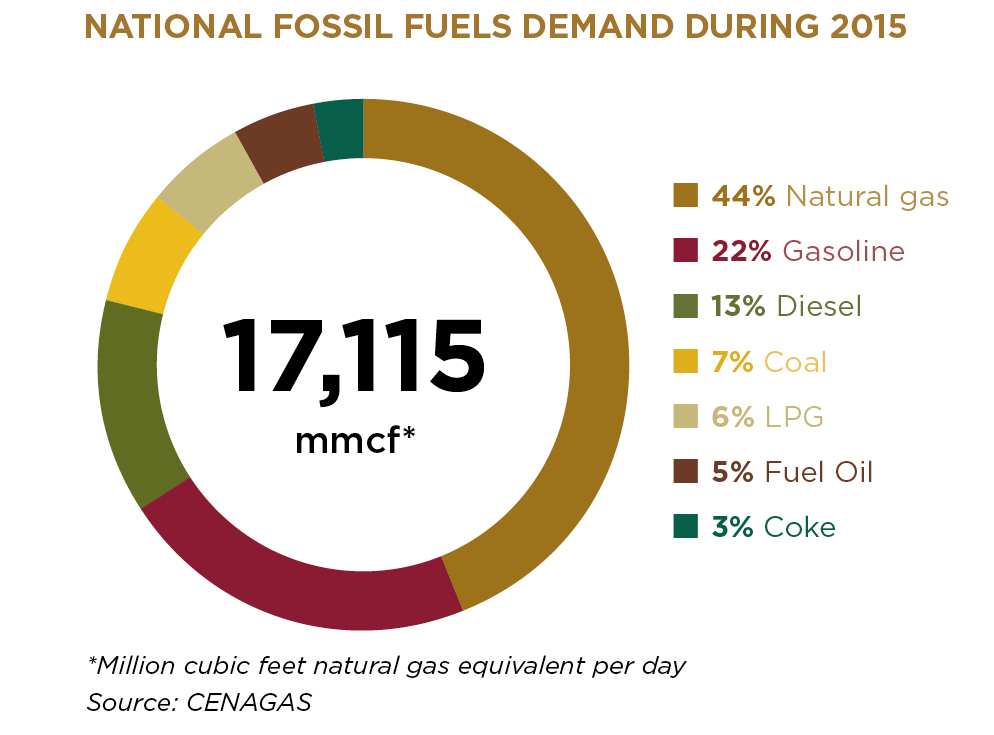 THE RACE TO MEET DEMAND

While consumption levels in the country are expected to increase, production will continue decreasing. As a matter of fact, July 2015 marked a tipping point for Mexico, as it was the first time in which the country’s imports surpassed the country’s production of natural gas. During 2017 and in the coming years until results are seen from the hydrocarbons bidding rounds, this trend is expected to continue.
Under such a scenario, natural gas infrastructure for import, storage, transmission and distribution will play a major role in the proper development of the Mexican economy. David Madero, Director General of CENAGAS points to the efforts the agency has made to align the country’s expectations through the publishing of the second annual revision of the Five-Year Plan for expanding the natural gas pipeline network. "Through this plan, we aim for a greater balance between geographical locations where demand is increasing. We expect to increase our capacity to supply natural gas to those points, with both national production and imports.”

While the renewables market matures, the country will require a secure and continuous way of producing electricity, which is where natural gas comes into play. Madero highlights how, by its very nature, natural gas is a transition fuel that should not be considered an enemy of a clean future but as a necessary complement for renewable energies. “Our support in increasing renewable energy generation, intermittent by nature, lies in developing natural gas-powered electric generation terminals, either as a complement or substitution source during periods of low irradiation or wind speed,” he says.
Enzo Lozito, CEO of AB Energy México, supports Madero’s statement. “Cogeneration is a stabilizer. In each and every grid or electric system, we should have a baseload of distributed power produced efficiently, conferring the base on top of which we can add any sort of energy source, be it solar, wind or other. Cogeneration does just that,” he says.

CEL requirements dictate that cogeneration in distributed generation can actually be more profitable than using traditional renewable energies. Its flexibility, reliability and lower necessary investments mean the segment is expected 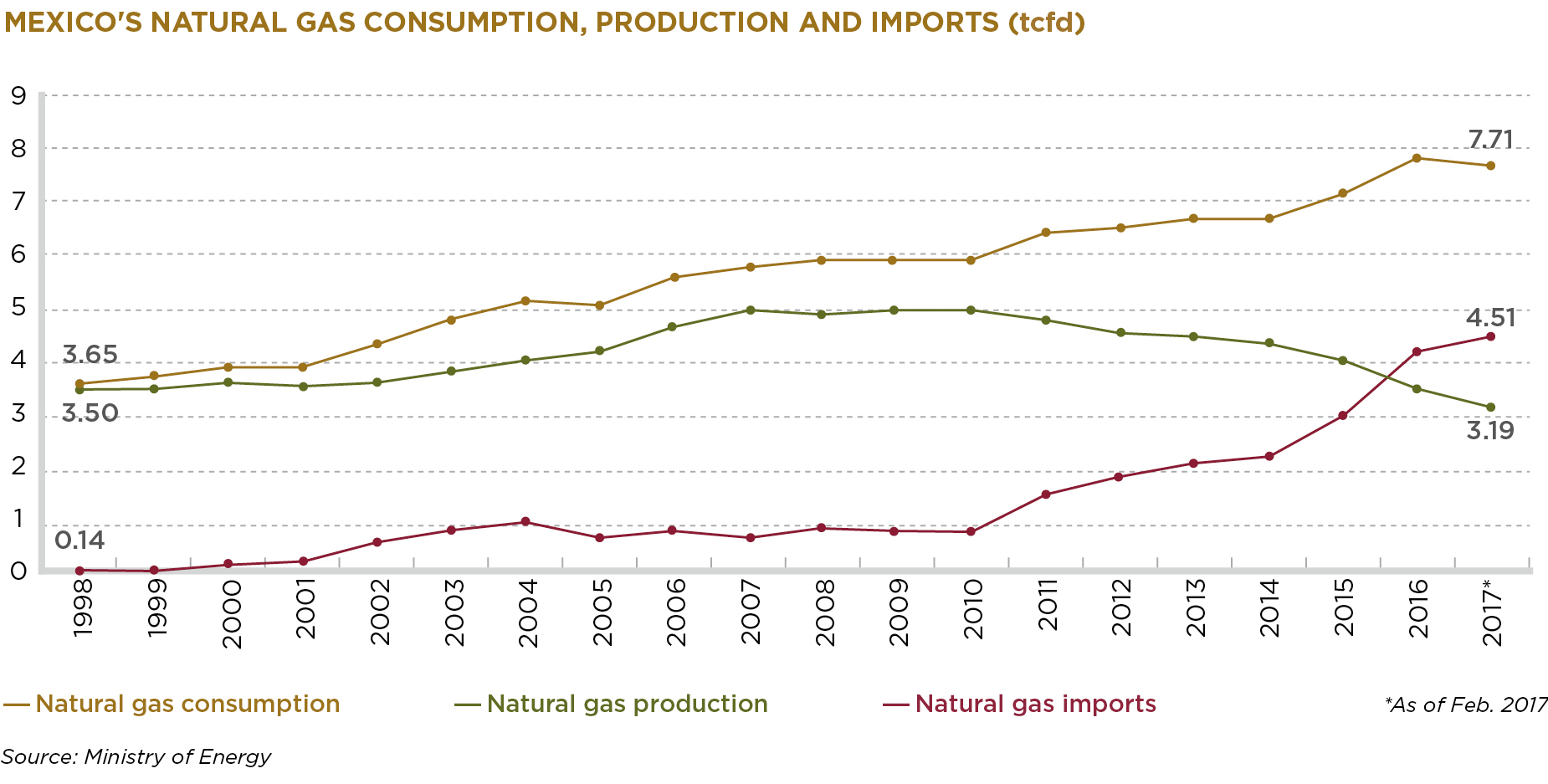 to take off in the next few years in Mexico, says César Sánchez, Regional Sales Manager of AB Energy. “With distributed generation, cogeneration yields a greater number of CELs compared to solar or wind power,” he says
Natural gas storage, processing, transmission and distribution is another business opportunity in which companies are looking to participate, by revamping the existing infrastructure and constructing new facilities. With the Energy Reform, PEMEX’s pipeline system was transferred to CENAGAS, which is now looking to update and expand the aged infrastructure. “CENAGAS received 9,000km of pipelines and nine compression stations from PEMEX, as well as a considerable surface infrastructure that requires optimal operational conditions,” says Madero. “We are launching four investment programs sanctioned by the Ministry of Finance: rehabilitation and maintenance of pipelines and compressors, implementation of our SCADA system, modernization of our monitoring systems and measurement stations, and financing a risk-based best-practices project to manage the integrity of our infrastructure.”

CENAGAS is evaluating the current available infrastructure plus the infrastructure under development nationwide outside SISTRANGAS to determine if it is sufficient to cover the electricity sector’s demand. “If not, we can pinpoint and design the required projects to sustain it,” explains Madero.

Other less conventional business opportunities created by the market are virtual pipelines and conversion of gasolinepowered vehicles to natural gas-powered vehicles. In such a large country, with remote locations and uneven population spreads, there are several advantages in using virtual pipelines, explains Alberto Escofet, Regional Manager of Enagás México. “Virtual pipelines can move gas by wheels, trains or even ships, making them much more flexible regarding the regions they must reach and the volumes they must handle.” He adds that they can also generate their own natural gas demand. “When a region gets natural gas via virtual pipelines, more equipment that uses natural gas is installed, meaning that the demand for natural gas increases,” he says. “After a while, the volume can justify the construction of a physical pipeline.