Solar energy is among the most representative technologies of the energy transition. It is normal to compare the installed capacity of wind and solar in every country, but solar technology presents a unique democratic characteristic: It allows anyone with a solar panel to participate in the energy transition that the world urgently needs.

Another important characteristic is the versatility of solar technologies, with different sizes and applications. Some of the most popular applications are:

The Netherlands, Brazil and Mexico ended 2019 with similar solar installed capacity but their different government energy policies and market conditions demonstrate the impact in the near future on each country.

Solar Power Europe launched its Global Market Outlook 2020-2024 in June 2020. The document provides readers with a very good overview of the solar market as of 2019, forecasts for the coming years and technological trends in the solar sector. This document compares data from three markets: Brazil, Mexico and The Netherlands. It is important to note that the report considered the economic impact of the COVID-19 pandemic and the energy policies of each country.

The three countries can provide lessons learned to others and contribute to a faster market development, facilitating knowledge and technology transfer.

One of the main pillars in the Netherlands to boost the energy transition is the subsidies scheme for renewable energy. The Stimulation of Sustainable Energy Production (SDE+) scheme has a €4 billion (US$5 billion) budget for the spring 2020 round. (Macola 2020) The SDE+ is a subsidy where renewable energy producers receive financial aid according to the amount of renewable energy they produce and the technology they use for it. There is no doubt that the 2020 round was a complete success, adding a 15GW pipeline of renewable energy projects. (Solar Power Europe 2020) Today, solar energy is the most popular energy technology in the country. The Regional Energy Strategies (RES) of the 30 energy regions are considering the implementation of solar energy projects that could shift the ratio between wind and solar from 60:40 to 20:80. (Pieters 2020). Solar panels produce approximately 1,000 hours of optimal energy in the Netherlands, while wind energy produced 3,000 hours per year. (Bak 2020)

One of the main challenges that the Netherlands faces regarding new solar installations is the space that is needed. This is the reason why ground-mounted and floating solar parks have only 20 percent of the market share, which is the opposite of Brazil and Mexico. According to the Global Innovation Index 2019, the Netherlands is the fourth-most innovative country in the world. This can be seen in the development of new renewable energy technologies.

Brazil's solar attractiveness is not only due to its size and solar irradiation but to the energy power auctions that are securing steady growth and visibility for the large-scale solar business for years to come. The Brazilian utility-scale solar market is not only for subsidized projects: In January 2020, the country had 5.5GW of unsubsidized solar projects with operational permits that were looking for PPAs. (Bellini 2020) In the first quarter of 2020, Brazil reached its 5GW milestone, surpassing all official expectations. In its 10-year energy plan, the Brazilian energy research office forecast the country would end 2029 with 20.4GW of installed capacity. (Solar Power Europe 2020)

In Brazil, there are two main market segments for solar projects:

Mexico’s energy market has been in the spotlight since the 2014 Energy Reform, which allows private companies to participate in the energy sector. Subsequently, renewable energy has been growing at outstanding rates. The long-term auctions had played an important role in solar PV development in Mexico. The three auctions allocated a total of 4.8GW of solar installed capacity. To date, there are 63 solar parks in operation. (EnergíaHoy 2020)

As in other countries, Mexico has an open electricity market and a distributed generation sector. Any solar installation that is above 0.5WM needs an operating permit from the regulator and can participate in the open electricity market under different schemes. Solar installations under 0.5MW fall into the distributed generation sector, which does not require a permit but can only sell the energy to the state electric company CFE under net-metering, net-billing or total sale schemes. The Mexican energy market has been all over the news due to the government’s recent changes in its energy policies. The government is trying to slow down the energy transition, claiming that renewable "intermittent" generation is causing reliability issues for the national grid (SEN).

Fortunately, the courts in Mexico have favored the free-market conditions, stopping these policies that were giving market preference to state companies. With the utility-scale market in limbo, distributed generation has gained the attention of investors. With a potential for 84GW from solar rooftops in the country and the entrance of new technologies, this sector can be the catalyst for developing the country’s economy with clean power.

The most important pillars that a country needs to boost its installed renewable energy capacity are strong energy policies and reliable market conditions. The energy policies in combination with subsidies and innovation have boosted the Dutch solar market, surpassing its historical preference for wind technologies. The achievement of 15GW in the pipeline is an important lesson learned that other countries may want to replicate. The importance of this achievement is that almost all the projects are solar rooftops and not utility-scale parks, proving that distributed energy generation can be the motor that drives the energy transition.

The Brazilian energy policies have demonstrated that placing auctions in the country provides certainty for the development of the energy sector. It also showed us that given a solid legal framework, companies will look to the open electricity market by signing PPAs with other market participants.

Mexico has shown that any changes in a country’s energy policies can lag behind the future installed energy capacity of the country, as shown in Figure 5.

One of the most important lessons that Mexico can learn from Brazil and the Netherlands is that distributed generation can be an attractive alternative to increase the installed capacity of renewable energy and boost the local economy.

The Dutch solar innovations and their expertise in solar building facades, solar rooftops, floating solar, among others, can be an opportunity for other countries to replicate and adapt them to local conditions. After all, the Netherlands has demonstrated to the world that space is not a limiting factor in the drive to increase renewable energy generation. 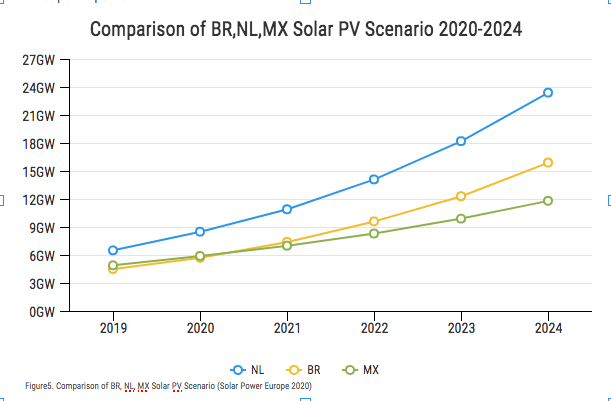 The solar energy market has proved to be very competitive and any changes in a country’s energy policies have an immediate effect on its future installed capacity. Moreover, it has been shown that distributed generation can be an attractive option for any country to increase its installed renewable energy capacity in a more democratic and energy efficient manner. The future of solar energy is also related to the combination of different technologies, such as EV, energy storage, or green hydrogen production, making solar energy one of the best choices for the energy transition. Each of the countries discussed show potential for future businesses. Are you interested in exploring your market potential in Mexico? Holland House Mexico, the bilateral Chamber of Commerce between the Netherlands and Mexico, is here to help you.