Wind's Potential Not Yet Tapped

The third long-term electricity auction went into the history books not only as the auction that broke the world record for the lowest generation price, but also as the one where wind took over solar, despite the odds. The official results revealed that wind achieved a bidding price of US$17.7/MWh

Solar dominated the first long-term electricity auction by winning 81 percent of the capacity to be developed, but the results of the second and third auctions showed how highly competitive wind can be. This should come as little surprise given Mexico’s wind availability. “You can find great resources in Mexico, such as in the states of Tamaulipas, Oaxaca, and the northern part of Baja California, where you have extremely good wind resources, with capacity factors of 40 percent on average. It is a matter of finding the right places and the right resources,” says Angélica Ruiz, Vice President and Managing Director Mexico and Latin America of Vestas.

Despite vast availability, the country has yet to fully exploit wind’s potential, says Ralph Wagner, Director General of Mexión. He believes Mexico can take advantage of many areas. “We are just starting to address the full potential of the country. Close to 50 percent of the areas with the best wind resources in Mexico have not been explored because of both a lack of analysis and inadequate infrastructure or permits.”

The numbers support the attractiveness of the resource. From January to October 2017, wind plants in the country sold 1,662GWh, compared to the 10.3GWh produced by solar. According to Vestas' Ruiz, this goes hand in hand with the advantages wind technologies provide over solar. “Technically speaking, it takes longer to develop a wind farm than a solar park, but the generation capacity is better from wind farms. In comparison to solar, wind blows 24 hours a day. There is a 7:1 ratio of land usage when you compare wind to solar energy.” 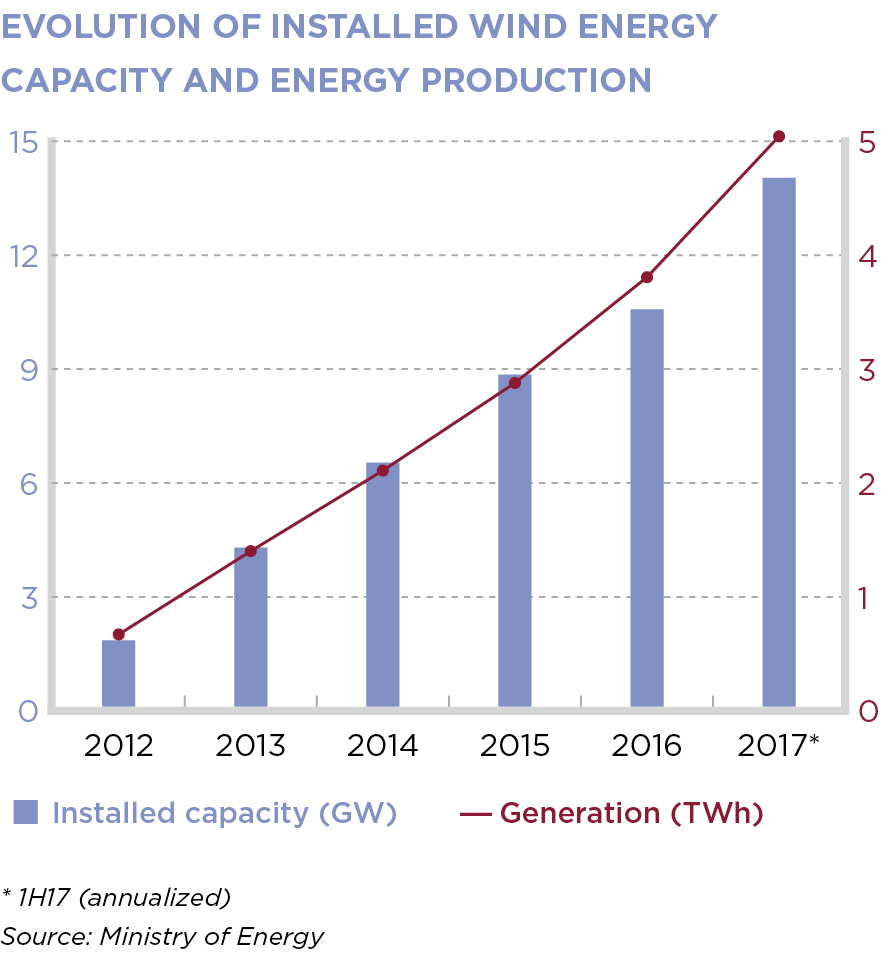 Those numbers are reflected in the 2017-2031 version of PRODESEN, where it is expected that during those years, of the 55,840MW to be installed in Mexico, 24 percent will be deployed via wind projects, placing the technology second to combined cycle (which, as explained in previous chapters, offers security to the grid). Insiders like Alejandro Robles, Country Manager Mexico of Nordex Group, emphasize that the regulatory framework in Mexico has been properly deployed and will allow Mexico not only to reach its clean energy generation goals, but also its intention to become a powerhouse for international investment in the area of renewable energies. “The Mexican market is key for us because of the steady and long-term regulatory framework that many other Latin American countries lack,” he says.

While the tendency in Mexico is to install bigger turbines, to take advantage of the wind energy resources with which the country is blessed, some players in the industry are working to bring wind into the small distributed generation sector, and in this way further increase wind’s market penetration. With wind turbines that range from the 0.25 to 1MW, EWT is working to create a niche market in the country and is trying to replicate one of the highlight projects it developed in the Netherlands i 2017, explains Ignacio López, Business Development Manager Latin America of Emergya Wind Technologies. “This project lets people within the same postal code invest and become owners of local renewable energy projects. Through this project, they can save up to 40 percent on their electricity bill. To take it one step further, EWT also got the project into a crowdfunding scheme offering a 4.5 percent ROI. Eighty percent of the crowdfunding came from the residents who would receive energy from the project, as well as from EWT employees.” Nevertheless, he recognizes that distributed generation regulation has been a problem delaying business development activities. “These kinds of innovative projects are also possible in Mexico, we just need the right regulation to allow it.”

A key hurdle that has kept wind projects from being developed at the rate they were expected to is Mexico’s infrastructure. Unfortunately, the most adequate regions for the installation of projects are not so close to the proper infrastructure to transmit the generated energy. Having to build the needed infrastructure may hinder the viability of a project and if this element has not been properly evaluated before construction 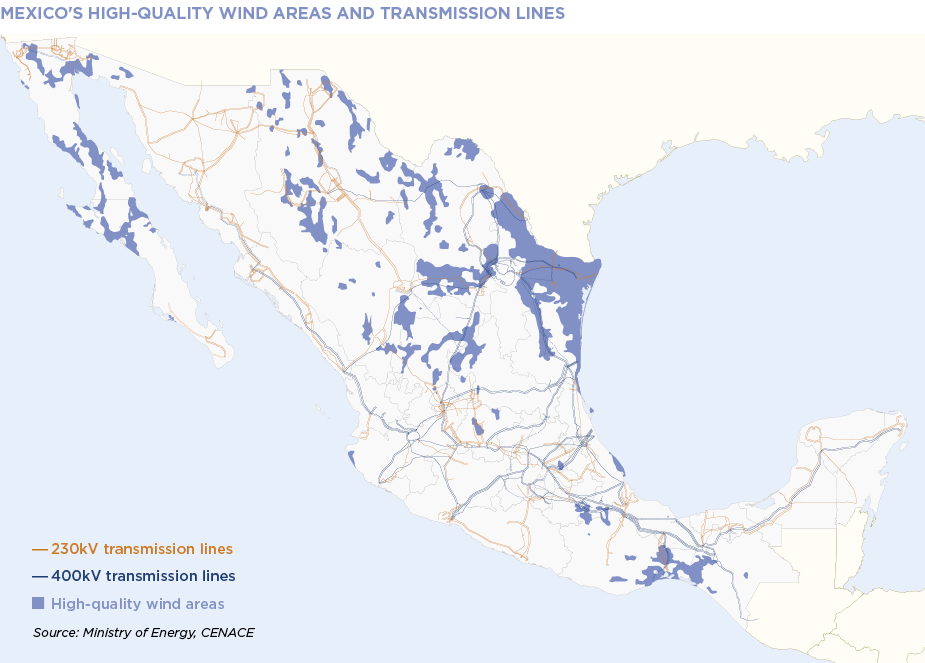 begins, it may put the project in jeopardy midway, according to Alejandro Cobos, Country Manager of NOTUS Energía México. “In our experience it is not enough to have highvelocity wind; the electric and civil infrastructure must be easily accessible to make a project feasible. If these elements are too far away from the development area, the resulting cost may actually put the project in jeopardy.” Cobos also mentions the critical role social and environmental issues play in any project. Situations such as that which took place in La Ventosa, where social issues caused the lengthy postponement of the project, should be avoided, says Gabino Fraga, Managing Parnter at Grupo GAP, as the project “signaled to the world that investments were not secure in Mexico. As Mexicans, we cannot afford to keep sending these kinds of signals.”

Julio Ramírez, Managing Director of Mexión, highlights the importance of not only adopting but also adapting technologies from abroad. “Wind park elements are built to operate under conditions that do not significantly represent Mexico’s true weather environment. For example, a blade may be able to withstand a certain velocity under laboratory conditions but the higher air density in Mexico as well as the turbulent winds in the country put stronger tensions into play, therefore reducing resistance and making components prone to failure.”

But obstacles often present opportunities and Mexico can take advantage of its privileged position to create a logistics market, Robles says, using the example of nacelles. “Nacelles
are made up of many pieces and it is more economical and easier to transport an entire nacelle, with all its components, than to do so piece by piece. If Mexico could produce an entire nacelle to serve the market, it would be able to compete against countries like China.” He also points to the fact that for Mexico to be able to participate in such a market, a proper value chain in the country specialized in wind elements is needed. “Chinese turbine manufacturers have an entire environment supporting their activities so they are able to ship an entire nacelle anywhere in the world at a very competitive price. The challenge in Mexico is to develop a local supply chain ecosystem that will support the manufacturing industry in order to take advantage of the country’s logistics.”

To create a proper value chain, however, wind projects will be needed. This means that the more projects are generated, the benefits will not only be reflected in cleaner, cheaper energy, but also in the creation of more jobs due to the value chain that will develop as the number of projects increases. “Thanks to the Energy Reform, the projects and investment coming to the country will certainly allow for the development of a strong value chain,” Robles adds.

According to Ruiz, all the benefits brought by a strong wind energy market will come with time. “The Energy Reform is still new, having been implemented in 2014. If we look at where we are now, a lot has been done. We find ourselves in a transitional phase: the starting point of the Energy Reform in terms of power generation has been extremely successful.”