2013 marked the beginning of a new era for the Mexican energy sector, with a new government shaping Mexico’s energy future and a landmark Energy Reform being approved. President Enrique Peña Nieto’s administration dedicated its first year in office to advancing its ambitious reform agenda, which slowed down economic growth to 1.2% as opposed to the forecast of 3.4%.

OPERATING FRAMEWORK Last year’s milestone has undoubtedly been the Energy Reform, which was approved in December 2013 and the specific changes to the secondary laws are scheduled to be announced in April 2014. The Energy Reform opens up the power generation market to private parties and establishes an express constitutional prohibition on granting concessions to private parties for wheeling and distribution of electricity, as well as for planning and operational control of the National Electricity System (NES). However, the private sector will be able to participate in the construction, maintenance and operation of the electrical grid. Wheeling and distribution rates, as well as the permits to generate electricity, will be regulated by the CRE. CFE will remain as the sole developer of transmission infrastructure but the National Energy Control Center (CENACE) will become the independent organism that operates and controls the NES. Within this operating framework, Mexico will pursue its ambitious goal of generating 35% of its energy from clean sources by 2024 while reducing greenhouse emissions by 30% by 2020.

The National Energy Strategy has identified natural gas as Mexico’s major resource for the future due to its high availability and low cost in the North American region. According to CRE, 216MW of new capacity was added last year through self-supply and cogeneration projects. CFE called for bids for the combined cycle power plants of Centro II (660MW in Morelos), Valle de Mexico II (601MW in the State of Mexico), and Noreste (1,034MW in Nuevo Leon). Although natural gas is a fossil fuel, it is considerably cleaner than fuel-oil, coal, and petcoke, with CFE planning on replacing heavily pollutant plants with this cleaner alternative. The main challenge in the natural gas sector remains bottlenecks in transportation infrastructure, but more pipelines are being built to import natural gas from the United States and distribute it throughout the country, increasing its participation in the energy mix to 72% by 2027. While natural gas will remain the main component in the Mexican energy mix in the short and medium-term, it is considered to be a transition fuel in Mexico’s long term energy future. 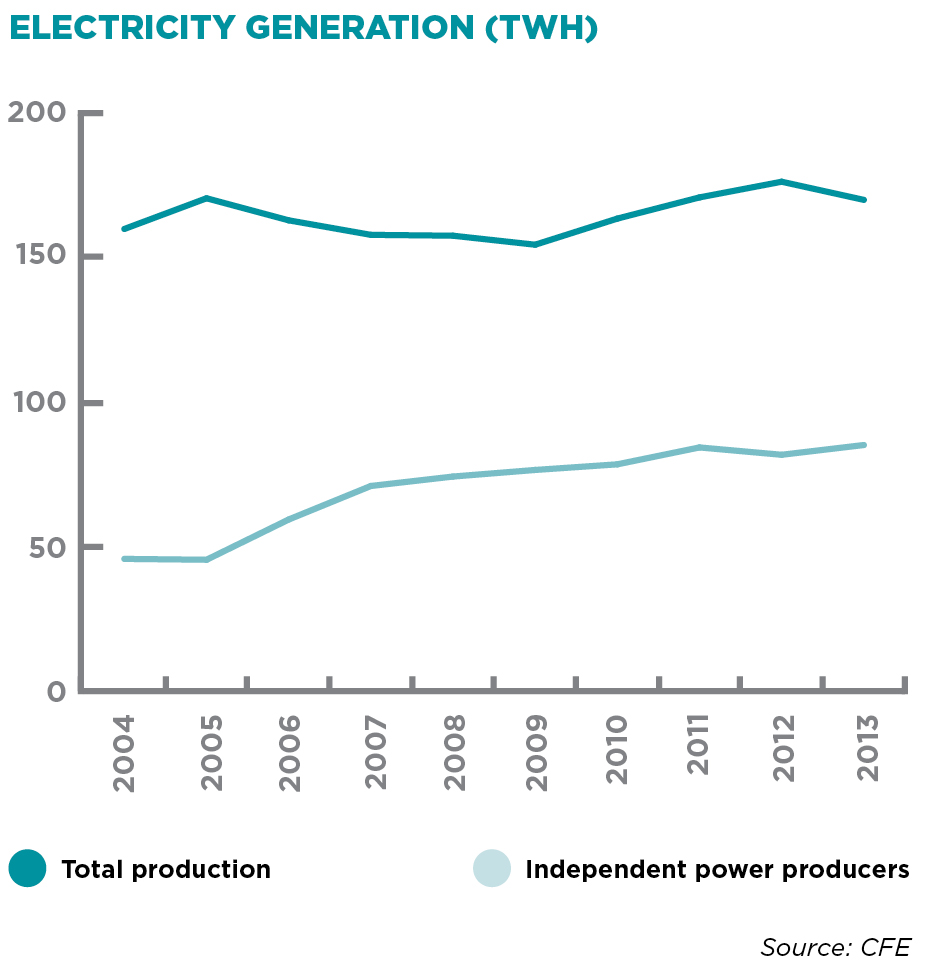 Hydropower already accounts for over 21% of the total power generation in Mexico. CFE called for a bid of 225MW for the Chicoasen hydroelectric project and four small hydroelectric projects in the states of Veracruz, Jalisco and Oaxaca, taking Mexico one step closer to capitalizing on its 56GW hydropower potential. The country’s only nuclear power plant, Laguna Verde, has been in operation for more than 20 years, with a capacity of 1,610MW. Using nuclear energy remains controversial due to the associated risks to the environment and society. However, new technologies are being developed and the safety risks have been reduced, which might clear the way for a second nuclear power plant in the future. CFE has several geothermal projects around the country with the largest facility at Cerro Prieto, Baja California, representing 720MW installed capacity. Mexico is the world’s fourth largest producer of geothermal energy with a total installed capacity of 980MW. Geothermal energy has received special attention during the Energy Reform, and once the secondary laws have been made public, it will become clear to which extent this sector will be opened up to private participation. 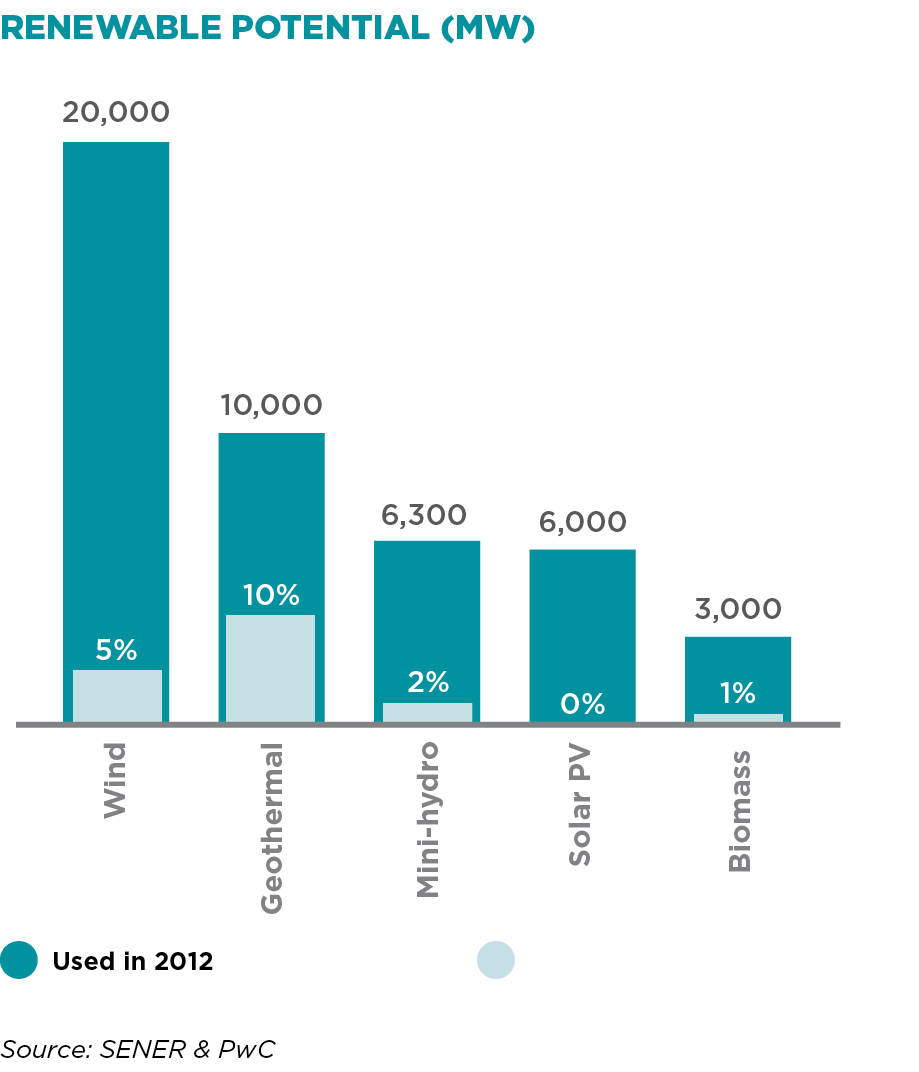 The Mexican wind industry had a total installed capacity of 1,635MW as of September 2013, and remained largely dominated by self-supply projects in Oaxaca. The inauguration of the Santa Catarina project in the state was an important milestone as it is the first project in Nuevo Leon, the first project which saw GE turbines were installed in Mexico, and the first case where several municipalities became collective off-takers. Projects in states including Baja California, Tamaulipas, Zacatecas, Puebla, San Luis Potosi, Oaxaca, Chiapas, and Yucatan are in the planning or development stage, with more states expected to follow in the coming year.

Mexico’s solar resources are considered to be among the best in the world, especially in northern states such as Baja California and Sonora. The Mexican solar market consisted of 1MW of installed capacity in 2010, but increased to 6MW in the following years. In 2013, the first large-scale solar project, the 30MW Aura Solar I, started operations in Baja California Sur. Throughout the year, permits have been awarded for the development of solar projects totaling 434MW, creating a substantial solar project pipeline.

Mexico has vast bioenergy resources and important opportunities can be drawn from the over 41 million tonnes of solid waste the country generates a year. SEMARNAT has determined that 112 landfills are needed and few states already take full advantage of opportunities for the selective recollection of waste. The possibilities to create energy out of solid municipal waste can also become a viable solution to waste management and energy challenges in Mexico. On the other hand, there are still no large-scale biofuels plants in Mexico.

Obtaining financing is of the main challenges for renewable energy projects. LAERFTE allows private companies obtain energy from renewable energy projects through the self-supply scheme. Companies such as Peñoles, Cemex, Walmart, Femsa, Volkswagen, and Grupo Bimbo are examples of off-takers that have made the financing of wind projects viable based on their credit ratings. However, the amount of companies with AAA credit ratings is limited, which has motivated companies to develop new models to work with smaller off-takers, either from the public or private sector and potentially pooled together.

Access to reliable transmission and distribution infrastructure is essential for the development of energy and renewable energy projects alike. The main challenges posed by renewable energies are the fact that power generation and consumption are often in geographically different locations, and that renewable energy sources such as wind and solar are intermittent by nature. Historically, CFE has been the only entity authorized to construct and operate energy transmission and distribution infrastructure. However, with the Energy Reform the private sector will be able to participate in the development and construction of transmission lines, while CFE will remain as the planner of the grid. The operations will be handed to CENACE, a former CFE division that will now become the independent grid operator. During 2013, CFE built 729km of transmission lines and further expansions are necessary in the coming years to support the growth of the electricity sector in Mexico.

Increasing generation capacity and energy efficiency are equally important to meet Mexico’s future energy demand. During 2013, energy efficiency projects for public administration facilities, states and municipalities and for small, medium and large companies and were supported by the National Commission for the Efficient Use of Energy. 2013 was the last year in which incandescent light bulbs could be sold to the residential sector and only 40W and 60W light bulbs were available. The year 2014 will be crucial to increase the energy efficiency due to the recent abolition of incandescent light bulbs in the market, promoting the use of LED lighting.