(Please note that this analysis focuses on cross-border investments from Latam-based VC investors, and ranges from Jan. 1, 2018, to Dec. 31, 2020.)

Latam startups are booming. So is the Latam venture capital ecosystem, which has been steadily growing and consolidating since 2011. Today, more than 400 local VC investors are active in the region. Most of them started investing in their home country but more and more are exploring and deploying capital abroad. We call them VC TechXplorers.

At ALLVP, we are VC TechXplorers. For example, we have invested in Colombia with RobinFood, in Chile with Cornershop and in Argentina with Wonder Brands. We wanted to learn about what our colleagues were up to.

Following our research on startup TechXplorers, we launched a project to better understand this investing landscape. We sought to answer the following question: Which country has been the most active in the region in terms of VC investment outside its home country?

Here is our overview of the cross-border capital flows in the region since 2018. 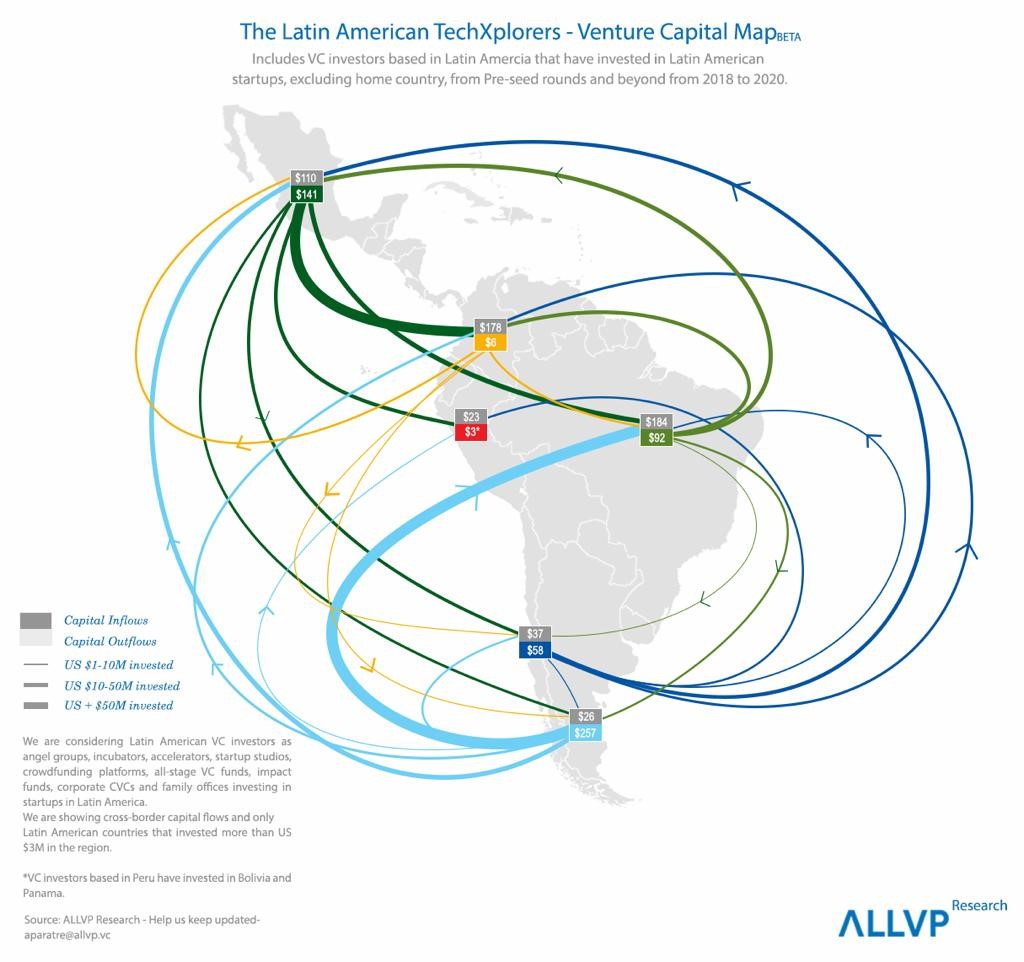 To answer this question, we nailed down more than 400 Latam VC investors that deployed capital in the region between 2018 and 2020. We discovered that over US$565 million was flowing between countries within Latin America.

Here are some of our key findings:

Out of the US$1.5 billion invested by Latam VC investors in the region, we found that less than 40 percent of this capital (US$565 million, or 37 percent) flows to another country in Latin America.

Brazilian and Colombian funds invest almost all their “Latam capital” in startups based in their own countries (88 percent and 77 percent, respectively). Mexican and Chilean funds are more diversified geographically, deploying half of it abroad.

On the contrary, Argentinian funds deploy only 10 percent of their Latam capital locally, driven by top VC funds like Kaszek deploying capital across the entire region: Loggi in Brazil, Kavak in Mexico and NotCo in Chile, among others.

Among the US$565 million in Latam cross-border funds, Argentina has deployed US$257 million, which represents 45 percent of the total deployed funds. Argentina’s top VC funding routes are Brazil with US$148 million invested there and Mexico with US$54 million.

Mexico is also active in terms of cross-border investments with US$141 million deployed, which represents 25 percent of total funds deployed in the region. Most of this amount is going to Colombia (US$79 million, 56 percent) with key investments such as Arca Continental participating in Liftit’s US$23 million Series B or IGNIA and Angel Ventures investing in OFI's US$12 million Series B.

Top 3 - Where is Latam VC TechXplorers cross-border capital flowing from?

3. Colombia is a top destination for cross-border capital inflows.

If we now look at the other side and exclude all the money flowing from Argentina to Brazil, Colombia is by far the winner in terms of capital received from Latam VC TechXplorers. From 2018 to 2020, a total of US$178 million was invested in the country.

Within US$178 million received, almost half comes from Mexico (US$79 million, 44 percent). The rest is primarily split between Brazil and Argentina (US$43 million, 24 percent, and US$37 million, 21 percent, respectively) with key players such as the Brazilian fund Monashees investing in Frubana’s US$25 million Series B or Kaszek investing in Truora’s US$20 million Series A.

Top 3 - Where is Latam VC TechXplorers cross-border capital flowing to?

At ALLVP, we have partnered with formidable companies and entrepreneurs in different Spanish-speaking Latam countries. We’re excited about what's coming next and hope to see more Latam VC funds betting on our formidable regional founders.

Don’t hesitate to contact us to keep up-to-date with our research at aparatre@allvp.vc and cnovene@allvp.vc. Thank you Anne-Charlotte for your amazing help on this piece of research!

Entrepreneurs
Discover the Venture Capital Routes in Latin America
Entrepreneurs
Who Were the Most Active VCs in Spanish-Speaking Latam Fintechs?