In Silicon Valley, everybody knows PayPal’s success story from the 2000s. PayPal was one of the first tech exits, subsequently followed by the launch of ventures from its former executives and employees, giving birth to the “Startup Mafia'' concept. From Tesla, LinkedIn and Yelp to SpaceX, the “PayPal Mafia” brought the US ecosystem to a next level.

Thinking about Latin America, we asked ourselves about these mafias. Which Latam startup has inspired, trained and invested in their own circle, thereby developing a small ecosystem?

We initiated this research with the idea that the emergence of such mafias would likely reflect the growing maturity of the Latin American ecosystem. And actually, it did.

While reflecting on the definition of a “mafia”, we differentiated it from a “cluster.” For us, members of mafias should share strong ties, being involved as board members or business angels, whereas in clusters, links are not so evident (at least, not yet).

Our first step was, therefore, to identify the Latin American clusters, then categorizing some of them as mafias. Here are the main clusters we have identified, categorized by size: 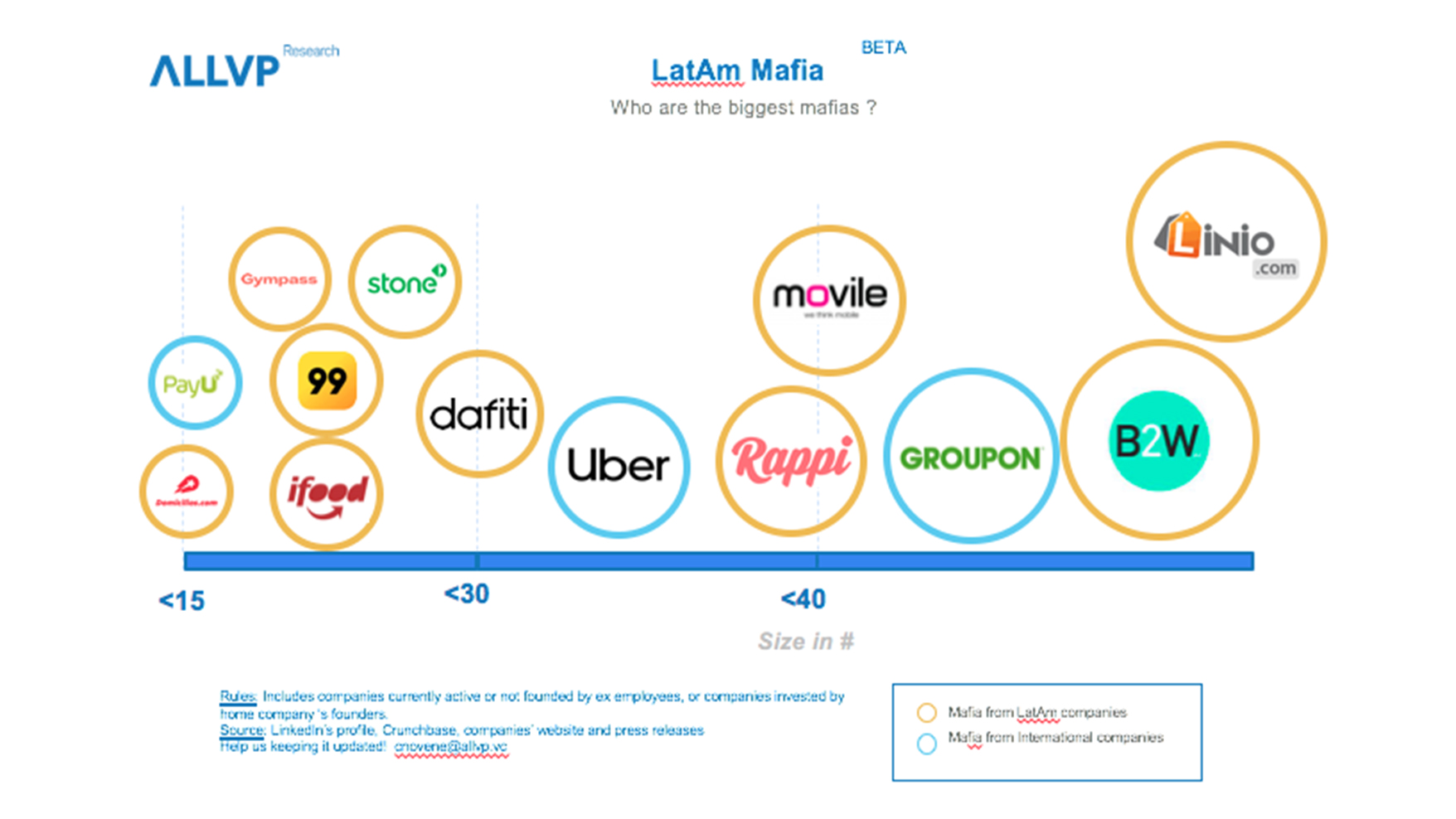 From this list, we decided to dive deeper into some that we identified as mafias, including Rocket Internet/Linio, Groupon, Uber and Rappi. Within these four small ecosystems, many former founders or employees are re-investing heavily, while launching new companies. As such, more than 200 companies emerged from these mafias’ alumni.

Rocket Internet was established in 2007 by the Samwer brothers, serial entrepreneurs and investors in companies such as Facebook and LinkedIn. This venture builder has launched 100-plus companies worldwide (Lazada, Delivery Hero, HelloFresh), thereby training generations of founders, who subsequently launched new ventures across the globe.

Latam is no exception, with Rocket Internet companies such as Linio, which was launched in Mexico City in 2012, or Lamudi and Foodpanda, with offices in the region.

From our research, this mafia is the biggest one with 80-plus companies subsequently launched and one of the most connected in Latin America. Owing to Linio’s launch in Mexico City, most of these new companies are Mexican, including Kavak, Flat, Justo, Belvo, Urban and Yema.

Back in 2010, Daniel Undurraga, Juan Pablo Cuevas and Oskar Hjertonsson launched a first company called Needish, pivoting rapidly to ClanDescuento, a Groupon copycat on the Chilean market. Meanwhile, in the US, the newly unicorn Groupon raised millions of dollars to expand geographically. In a stroke of luck for them, only a few months after starting operations, ClandDescuento was acquired to become Groupon Latam and scaled to 1,000-plus FTEs by the original founding team.

We identified 55-plus companies belonging to this mafia, among them iconic startups such as Cornershop, Kavak, Justo, Casai or Wonder Brands.

For more information, you can also read the excellent article from 2017 by Nathan Lustig.

With more than 25,000 employees globally, Uber has been colonizing the world. Again, Latin America is no exception.

The Uber mafia may not be the most connected but this is definitely one of the biggest with 35-plus, companies created, including Urbvan, Palenca, Perfekto, Parrot Software and others.

Rappi was launched in 2015 in Colombia with the ambition to become the Latin American super-app. Rappi has shed light on the Latam startup ecosystem, considered by many as a “great school” with a deep-rooted entrepreneurial culture.

Connectivity between the Rappi mafia’s members might be the highest in the region. In comparison with Groupon's, Uber’s or Rocket Internet’s mafias, the Rappi mafia is younger but already counts 60-plus companies. Among them, many entered into YC: Laïka, Truora, Houm, Ontop, Tributi. It seems that Rappi’s “hyper growth” training is recognized by the ecosystem.

This research is a beta version, based on LinkedIn, TechCrunch and ALLVP interviews. Don’t hesitate to contact us to keep up-to-date with our research at cnovene@allvp.vc.

Entrepreneurs
A First Take on Latam Startup Mafias
Entrepreneurs
Discover the Venture Capital Routes in Latin America
Entrepreneurs
Who Were the Most Active VCs in Spanish-Speaking Latam Fintechs?