The entrepreneurial ecosystem in Latin America is booming and Mexico is enjoying its fair share of the bounty, including its first two unicorns. There is every reason to believe the country is just getting started.

“Latin America hosts an incredible market opportunity. There are 620 million people and over 17 million businesses across the region. Even if you are just focused on Mexico, which hosts 126 million people and over 4 million businesses, you have the ability to build a billion-dollar business by just capturing a tiny fraction of the market,” Founder and CEO of Runa HR Courtney McColgan wrote for MBN.

A strategic geographical position and a booming consumer market mean Mexico is fertile ground for entrepreneurial projects to develop. Foreign venture capitalists (VCs) are taking notice and putting their money in play. The largest VC investments identified in Mexico in 2020 exceeded US$10 million, five times higher than the largest amounts recorded in 2019, which totaled US$2 million, according to information from the Mexican Private Equity Association (AMEXCAP).

According to Liliana Reyes, Director General of AMEXCAP, funding for entrepreneurs has been impacted only to a minor degree by shocks like the pandemic. "The industry consolidates and strengthens when there are complex conditions because there are problems to be solved and areas of opportunity,” she said in a statement.

Prior to 2016, the number of foreign VC investments in Mexican companies was practically non-existent, with only five deals led by a foreign VC that year, according to Crunchbase. Since 2019, the number of deals led by foreign VCs has grown exponentially, despite the pandemic, with 89 rounds led by foreign VCs concerning Mexican companies. “Combining the knowledge that foreign VCs have of scale-up-sized businesses, the amount of capital they provide and the growing confidence and experience they now have in Latin America is leading to an explosion in the number and quality of deals in Mexico,” wrote for MBN Nick Grassi, Co-CEO of Finerio Connect.

According to Statista, in 2020 the value of venture capital investments in Mexico amounted to approximately US$1.2 billion, up from nearly US$650 million raised by startups in the country during the previous year. 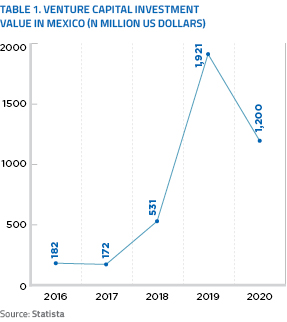 The Latin American region, facing numerous challenges, also seeks and supports projects that solve its unique problems. According to Fernando Lelo de Larrea, Partner at VC fund ALLVP, trying to replicate the same models that have been successful in Silicon Valley in Latin America is a mistake, as the two markets are quite different. “In Silicon Valley, the projects being financed are leisure-oriented for very privileged segments of the population. How are we tackling the problem of water, access to energy, access to education or better health? How do we pull people out of poverty? These are solutions that are not going to come from Silicon Valley but from ecosystems that are facing these problems every day,” he told MBN.

McColgan, who once worked for a VC in Silicon Valley, echoes this belief. While there, she and her team constantly wondered whether the founders were pitching a business or just an added feature to something good that already existed. “In the US, most of the major problems have been solved already. It is a developed society with widespread technology adoption. Therefore, most startups end up being incremental improvements on already pretty efficient ways of doing things. While they may increase the slope of the curve, they do not move the line. I found quite the opposite situation in Latin America. Every startup I have invested in is solving a real problem, with the opportunity to move the line,” she pointed out.

The thought that a Mexican startup could become a unicorn was unheard of a couple of years ago. But there are always players like Kavak who charge against the tide and succeed. In October 2020, the company became the first Mexican unicorn after reaching a valuation of US$1.15 billion. The startup implemented a digital model based on purchasing cars from individuals, refurbishing them and offering them for sale to the public. It has two reconditioning centers, one in Lerma, State of Mexico, and another in Guadalajara, Jalisco. In August, CEO Carlos García announced the platform would invest US$10 million in Argentina, its first venture outside Mexico, over the next 18 months.

“Kavak will be the unquestionable leader in Mexico in its segment. In five years, we will be operating in a few more countries across the region, with a market share similar to what we enjoy in Mexico. All consumers involved in purchasing, selling or financing a vehicle will see Kavak as their first option given the benefits we will offer. Our headline will be: Kavak Building Latin America’s Best Team. In five years, we may go public as well. We have great ambitions,” García told MBN. In April, Kavak reached a US$4 billion valuation after raising US$485 million, making it one of the best-valued startups in Latin America.

In May 2021, the Mexican market witnessed the emergence of its second unicorn. Crypto platform Bitso raised US$250 million in a Series C investment, bringing its valuation to US$2.2 billion to become the first crypto unicorn in Latin America. The investment will be used to continue providing access to cryptocurrencies to local residents and to expand operations. “We want to make sure that folks in the region really benefit from accessing these global financial services that are getting built on top of blockchain,” said Daniel Vogel, Co-Founder and CEO of Bitso, in a statement.

“The growth of the cryptocurrency ecosystem this year has been remarkable. It took Bitso six years to reach its first million customers. Now – less than 10 months later – we have reached 2 million,” Vogel added. In 2017, he told MBN that during 2014, the number of bitcoin transactions Bitso saw on a good month amounted to MX$4 million (US$200,000). By 2020, the platform was processing more than US$1.2 billion in international payments, including remittances and payments between companies.  According to Bitso, the platform has over 95 percent of the crypto market share in Mexico and over 60 percent in Argentina.

In recent months bitcoin has also started to gain support from the financial community, governments and private companies after being adopted in the payment processes of companies such as JP Morgan, Visa and Tesla. In early February, Tesla bought US$1.5 billion worth of bitcoin for “more flexibility to further diversify and maximize returns on our cash.” The company led by Elon Musk also said it will start accepting payments in bitcoin in exchange for its products “subject to applicable laws and initially on a limited basis.” Governments are also keeping an eye on cryptocurrencies. On Jan. 21, Colombian regulators chose Bitso as one of the nine companies allowed to test crypto under the government’s pilot program Sandbox.

“Five years ago, we said that there was going to be a Mexican unicorn and nobody believed it. Eventually, we will see a technology company in the Mexican Stock Exchange Index (IPC) or a Mexican technology company among the 20 largest companies in the country,” said Lelo de Larrea. 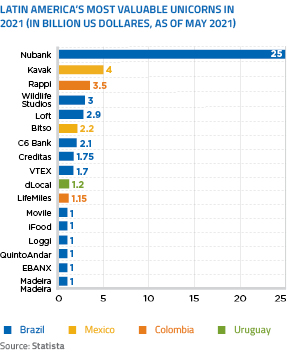