Mexican regulators have pulled all the stops to provide a regulatory framework that will strengthen every link of the industry’s value chain and guarantee competitive schemes on a level playing field. For the energy industry, 2017 was about maintaining, and even ramping up, the momentum from the year before

While staying true to its objective of increasing electricity generation through clean energy sources up to 35 percent of the country’s total energy mix by 2024, Mexico has also set an ambitious 100 percent coverage goal through the Universal Electric Service Fund, launched in May 2017. The fund is intended to extend CFE’s electricity distribution capacity to the doorstep of remote communities and also to install off-grid systems where extending the grid is not viable. The Ministry of Energy published the first tender for off-grid contracts that will impact 898 municipalities across 11 Mexican states, to install more than 10,000 off-grid systems that will benefit approximately 45,000 habitants, amounting to an investment of US$23 million.

Capitalizing on the success and learning from the results of the first two long-term electricity auctions, the terms for the third long-term auction, published in May, took Mexico’s energy transition one step further, and expectations are high. Minister of Energy, Pedro Joaquín Coldwell, declared this third edition could triple Mexico’s electricity production from clean energy sources, continue the low tariff tendency of the previous two editions and attract an estimated additional US$3 billion in investments. The auction was to take place in November 2017 with the results announced sometime later. One key feature sets apart this third edition: the Clearing Chamber.

Through this innovative instrument, CFE will no longer be the sole purchaser of power, energy and CELs, opening the door to private players, provided they prove their credit worthiness. KPMG’s Energy and Natural Resources Lead Partner, Rubén Cruz, says the Clearing Chamber is a “positive step forward toward building up an energy market. The reform’s mandate clearly stipulates reaching a wholesale market with diversified purchasers and suppliers. A single off-taker, instead of creating market conditions, impacts power producer’s margins and value through the former’s purchasing power.”

While the industry welcomes the Clearing Chamber, some note that these are still early days; it will take time before the true effect of the chamber is realized. “Mexico’s renewable energy scene is seeing an increased number of private energy traders and suppliers, but the aggregate volume they can purchase in the market at the moment is not significant enough for the Clearing Chamber to have a decisive and notable impact,” says Eduardo Reyes, Partner Power & Utilities of Strategy, a PwC consulting group. “We anticipate that the energy percentage that other suppliers, outside of basic supply, will purchase through the chamber will be relatively low, although it will keep growing over time. In the long-term, as the energy volume increases, the impact will be consequential and will be reflected in the final consumer price through increased volume and number of private suppliers offering energy.”

The year also saw the country release terms for its first midterm electricity auction, the goal of which is to provide certainty and reduce exposure to price volatility for electricity spot-market players. In August 2017, the Ministry of Energy launched the basis for the third long-term auction, with the results set to be announced in February 2018. The primary objective of this new instrument is to allow energy suppliers and energy purchasers to participate in contracts with terms no longer than three years. “Private players are hesitant to sign long-term bilateral contracts given that predicting market behavior is complex, while renewable technologies are experiencing a downward slope in costs. Three-year terms provide acceptable risk levels as well as equating tariffs with market tendencies” says Cruz. In comparison to the long-term electricity auctions, “shorter terms mean different financial schemes. This is where commercial banking feels more comfortable and more likely to participate through mini-perms,” says Marian Aguirre, Energy Finance Deputy Director of Bancomext.

As a testament to Mexico’s commitment to empowering consumers through a liberalized energy market and transitioning to a cleaner energy mix – enshrined in the Energy Reform – the country was admitted as a new member of the OECD’s International Energy Agency (IEA) by a unanimous vote on June 21, 2017. The agency determined Mexico’s energy policy is aligned with the IEA’s shared objectives of following international best practices and designing policies oriented toward sustainability and market competitiveness.

Making long-term electricity auction projects bankable is one of the biggest challenges posed by the new market. Compartmentalizing risk within the different stages of the project, relying on best practices, integrating innovative financing schemes and reaching financial closure are but a few of the elements that turn project development into a success story. “So far, two strategies have dominated the auction process: either you equate your offer price to your cost structure and see if it sticks, or you take a deeper look at the market, the competitive context and converge accordingly with the value chain to identify the prices that need to be reached,” says Adrián Katzew, Director General of Zuma Energía. “The execution phase is highly specialized, working with banks and contractors to close pending contracts and begin project construction. This stage is particularly fulfilling in the sense that we are defining unprecedented financial structures – meeting the require ments of annual energy volume, CELs, alternate markets that used to honor those obligations – and studying their intrinsic risks in relation to our business.”

Development banking institutions will have a key role to play in ensuring the success of the auction projects, which in turn will send positive signals to the market. “Banobras finances infrastructure projects, Nafin focuses on production chains and Bancomext fosters foreign trade. Despite specializing in different segments and having different mandates, all three development banking institutions are placing capital in energy projects to respond to the sector’s high financing needs. Put together, we represent a joint portfolio of more than US$2.5 billion dedicated to these projects,” says Bancomext’s Aguirre.

Social impact is the other element that project developers need to tackle head on. “Energy projects need to be directly related to social development. Energy projects are by nature long-term investments and are sprouting in different locations, surrounded by different communities. Coherent corporate social responsibility policies are at the core of this necessity. Companies that show resolve in finding ways in which a project can give back and have a positive impact on a communities’ quality of life are those that will see their project prosper in the long-term,” says Ángel Lárraga, President of AME and Gas Natural Fenosa.

Boosting Mexico’s installed capacity to address the expected increase in demand for electricity also requires sturdy and lengthy infrastructure to transmit and distribute it to key consumption points. Controllable demand and automated processes will be at the core of strengthening the grid by avoiding saturation and guaranteeing a seamless supply of electricity. “In 2017, we published the Program for Smart Electricity Grids. We designed a systemic vision to integrate new technologies under specific time frames, mirroring international tendencies. Progressive incorporation of energy storage, controllable electricity demand, electric cars and IoT are contemplated in this program,” says César Hernández, Deputy Minister of Electricity at the Ministry of Energy.

In line with Mexico’s Electric System Development Program (PRODESEN), the Ministry of Energy developed a new financing model for electric transmission lines where private third parties can participate. The announcement of the first bid for a major transmission line project, parallel to transmission line development on behalf of CFE with private players, was expected to be announced in November 2017. In its latest 2017-2031 version, PRODESEN is scheduling the construction of 23,772km2 of transmission lines, meaning an investment of US$11.5 billion.

Mexico’s energy authorities are not alone in this effort: “We are backing PRODESEN’s process of developing the country’s electricity network. There is a significant investment forecast in the expansion and digitalization of the network and we are pushing for an automated and smarter network with balanced power loads, as well as providing the equipment for a sturdier grid,” says Alejandro Preinfalk, Vice President of Energy Management for Siemens Mexico. 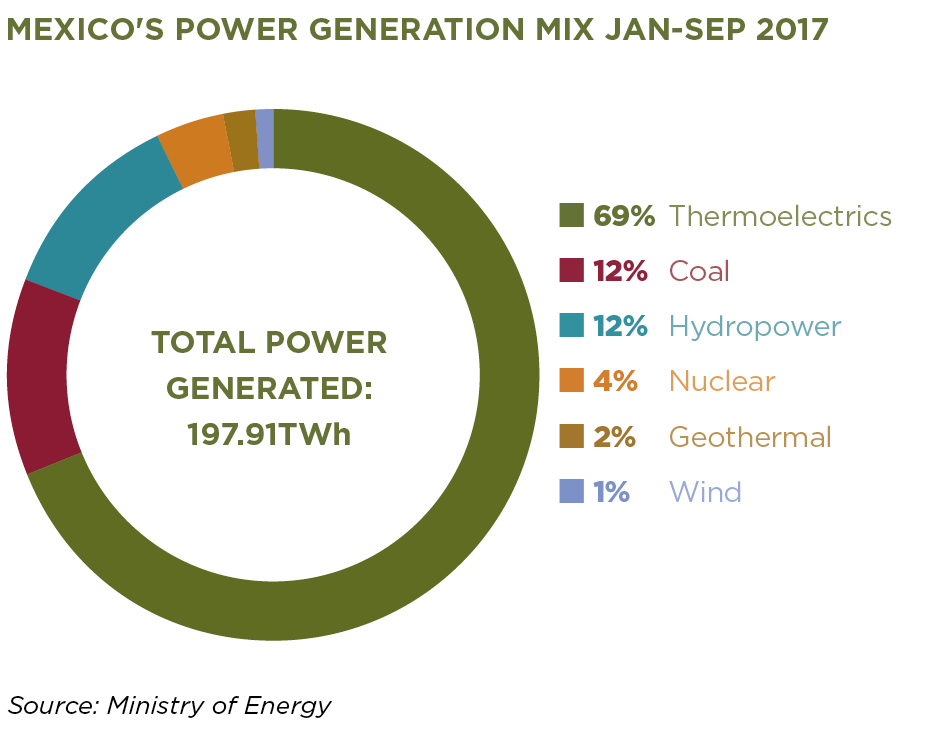 While on-site power generation is an important element of the country’s Energy Reform, Mexico had already experimented in that area prior to 2013, with bidirectional contracts with CFE and regulated by CRE. The scheme stipulated that whenever energy surpluses were produced, CFE stored them in a virtual energy bank for one year to be used at a later date. This initiative was the precursor to creating an appetite for residential and commercial solar systems in Mexico.

“Distributed Generation 2.0 regulations allow the closing of an interconnection contract with CFE through which you can not only store energy surpluses but also sell them under net billing and net metering schemes,” says Guillermo Zúñiga, Commissioner of CRE. Between 2013 and 2017, according to CRE’s statistics small and mediumscale interconnection contracts increased from 4,613 to 40,109, respectively. Installed capacity in that period went from 29,131kW to 304,167kW, an impressive tenfold increase for an incipient subsector.