Low-quality air covers many of the world’s biggest cities and Mexico is no exception. This creates a variety of health problems but initiatives are beginning to emerge to improve or solve the problem

Ninety-two percent of the world’s population lives in areas that do not meet World Health Organization (WHO) safety guidelines, according to a WHO study from September 2016. Mexico City is one of the most polluted cities in the world, and according to government data, saw only 78 days of clean air in 2016 according to WHO guidelines.

“Today, climate change and pollution are realities,” says José Narro, Mexico’s Minister of Health. “We have serious problems in Mexico City but both local and federal governments are taking action. We now have much better ways of measuring pollution levels and better instruments to measure the impact that polluting particles have. Mexico City is in a valley and pollutants do not disperse. Some actions taken include the restriction of vehicles and industrial activity, which limit mobility. The Environmental Commission of the Metropolis (CAMe) is a coordinating mechanism that includes local, state and federal levels of government. President Peña Nieto requested that the commission include the Ministry of Health. We all have to realize that we have to do things for our own health. There are several dimensions to health, one of which is individual and another is collective.”

Poor air quality accounted for one in nine deaths in 2012, according to the report. This translates to 3 million deaths globally for 2012 related to outdoor air pollution and 4.3 million related to indoor pollution. Of the total deaths, 93,000 occurred in low-middle income countries in the Americas. Around 87 percent of the deaths linked to outdoor air pollution occurred in low-middle income countries, where 82 percent of the world’s population live. According to the World Allergy Organization (WAO), common outdoor pollutants composed of particulate matter include vehicular tra c and fuels such as coal and gas for heating and industry. Indoor sources include wood and coal used for heating and cooking and tobacco smoke. Air pollution was responsible for 10 percent of deaths, the fourth biggest killer behind metabolic risks, dietary factors and tobacco smoke, according to a 2013 World Bank infographic.

atherosclerosis and neurodevelopment and cognitive function, according to the WHO. A study published in 2016 in the National Academy of Sciences examined patients in the UK and Mexico and showed links between air pollution and Alzheimer’s disease. The exact link between pollution and allergies is yet to be established but the WAO forecasts that as air pollution and the ambient temperature increases, so will problems related to allergies.

The organization measures air pollution in PM10 and PM2.5, which is particulate matter of less than 10 and 2.5 micrometers. The measures are an average taken between 2010 and 2015, unless the latest available data precedes this. It recommends no more than an annual mean of 20μg/ m3 for PM10 and 10μg/m3 for PM2.5. With the annual mean in Mexico varying between 11-35 PM2.5 μg/m3, it sits well above the recommended guideline.

In addition, pollution plays a role in other diseases and conditions, such as depression and cardiovascular health. “Urbanization and depression go hand in hand. As an economy develops, the population is weighed down with heavier workloads, we spend more time in traffic and produce more pollution, all of which are stress factors that can lead to depression,” explains Oscar Parra, Managing Director of Mexico, Central America and the Andes of Lundbeck.

Pollution in Mexico has long been a known-issue and its capital, Mexico City, was one of the first cities in the world to implement measures such as the license-plate-based restrictions Hoy No Circula (No-Drive Day) in 1989. The restrictions have evolved over the years and now prohibit drivers with cars that are not granted a 00 or 0 hologram (linked to car age and MOT results) and registered to Mexico City from driving on one of the weekdays. Since 2008, the measure has been extended to Saturdays. Cars with a 1 hologram are forbidden to be used on two Saturdays per month, and 2 holograms and cars not registered to the megalopolis are prohibited every Saturday. There is an additional contingency, initiated when pollution in Mexico City reaches 150 IMECA points, a measurement based on six types of pollutants. However, despite the extra Saturday measure, a paper published in

Nature by Lucas Davis, Faculty Director of the Energy Institute at Haas, finds it has had “virtually no discernable e ect on air quality.” The main reason attributed to this is that the expected increase in public transportation did not occur.

Still, the Global Alliance on Health and Pollution ranks Mexico among the top 10 countries worldwide turning the corner on toxic pollution in 2014, due to its e orts in turning a contaminated oil refinery in Mexico City into an urban park with over a million visitors per year. Two other Latin American countries, Peru and Uruguay, were also among the top 10.

On March 1, 2017, the Ministry of the Environment and Natural Resources launched a new National Strategy of Air Quality (ENCA). ENCA aims to “control, mitigate and prevent the emission and concentration of pollutants in the atmosphere in rural and urban areas by 2030” through five main lines, 21 strategies and 69 lines of action. The five main lines are: integral management to improve air quality, efficient and result-focused institutions, companies committed to air quality, atmospheric policies based on scientific bases and a responsible and participative society. Action in the responsible and participative society line has already begun as photos of children who cannot play outside due to dirty air are posted across the city and throughout the media, encouraging workers to cycle or take public transport and urging bosses to allow employees to work from home.

In high-income countries, 56 percent of cities with over 100,000 inhabitants do not meet WHO air-quality guidelines, nor do 98 percent in low-middle income countries. This prevalence of pollution costs the global economy dearly. The World Bank estimates premature deaths due to air pollution to have cost US$225 billion in 2013 in forgone labor income, up from US$162 billion in 1990. “The respiratory health of children is at higher risk since they inhale a higher volume of air per body weight than adults and their immune defense mechanisms are still developing,” says the WAO.

With pollution so deadly, many are creating alliances to help clean up the air. The World Bank partners with the Climate and Clean Air Coalition (CCAC) and the Global Alliance on Health and Pollution and the WHO has established a campaign with the CCAC and the government of Norway called BreatheLife, which has identified a number of ways to clear the air, including sustainable transportation, industrial emissions reduction, solid-waste management, renewable power and energy-e cient homes. For true change to occur however, a push for clean air needs to come not only from concerned NGOs but also from an involved population. 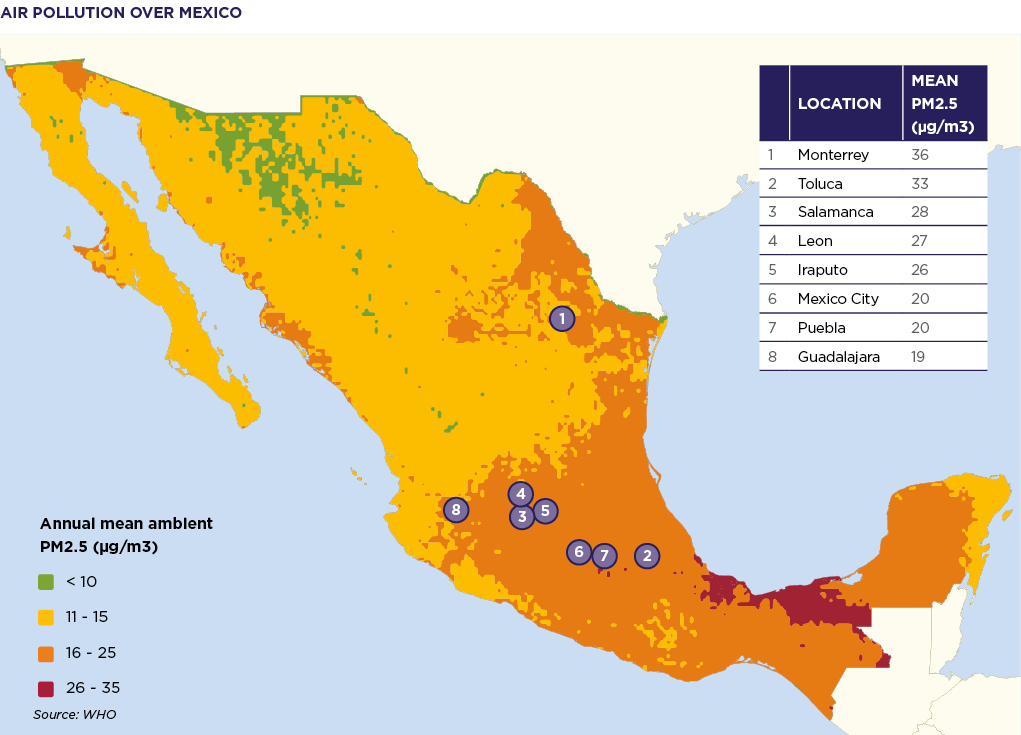 Tags:
MHR 2017
Logistics & Distribution
Finance
Mexico
CDMX
Puebla
World Health Organization
WHO
Share it, if you like it!
Suggest Hashtag