Are We There Yet? When It Comes to E-Prescriptions, No, We’re Not

Until mid-2018, the problem was that the regulation of both activities foresaw only the use of a hand-written signature for prescriptions. That year, the Ministry of Health amended the applicable regulation for medical services (mainly the Secondary Regulations for Health Services) to recognize a digital or electronic signature for prescriptions. It was great news. Unfortunately, it did not solve the problem, as the regulation for pharmacies (mainly the Secondary Regulations for Medical Products and the Supplement for Establishments of the Mexican Pharmacopeia) remained the same. Many pharmacies did not recognize electronic prescriptions because the regulation applicable to them still required a hand-written signature and they feared a sanction from the regulator if they deviated.

Then, in late 2020, one of the two regulatory instruments applicable to the pharmacies was modified (the Supplement for Establishments of the Mexican Pharmacopeia) to allow the digital or electronic signature. Finally, the two sides of the equation were being aligned. Did it solve the problem? Not quite yet. It came with two important limitations: (i) it imposed an additional measure not required before, and (ii) it excluded certain groups of products.

The amendment of 2020 to the Pharmacopeia, which entered into force in February 2021, stated that the digital or electronic signature in a prescription was subject to the following two limitations: (i) it had to comply with the Technical Standard NOM-151-SCF1-2016 over the Preservation of Data Messages and Digitization of Documents

("NOM 151") and (ii) it would only apply to one group of medicines of those referred to in Article 226 of the General Health Law (GHL). What do those two limitations mean?

In 2000, the Code of Commerce had an important amendment, reflected in Article 49, where: (i) the concept of data message[1] was introduced as an alternative to preserve original documents, (ii) it was clarified that for data messages to be reputed as "original" documents, data messages should be preserved intact and unchanged, and (iii) mandated the creation of a technical standard to develop the precise requirements for such preservation.

For that reason, technical standard NOM-151 was born in 2002 (and updated in 2016) to meet a very specific objective: demonstrating intact and unchanged preservation of data messages. NOM-151 creates a process where a third party (i) encrypts the data message created by a merchant, and (ii) issues a certificate about it. Such certified encryption creates a presumption of integrity that can be relied upon by any other merchant or authority.

Now, the problem of requiring such certification in medical prescriptions is that this increases the costs of all transactions, which may precisely run counter to the intention to increase access to healthcare by facilitating telemedicine. This increased cost may lead to either discouraging the use of the electronic prescription or to the transfer of such costs to users (patients). Neither would be conducive to increasing access to healthcare.

To recall, GHL Article 226 contains six sections, each classifying a group of medicines according to its prescription characteristics. 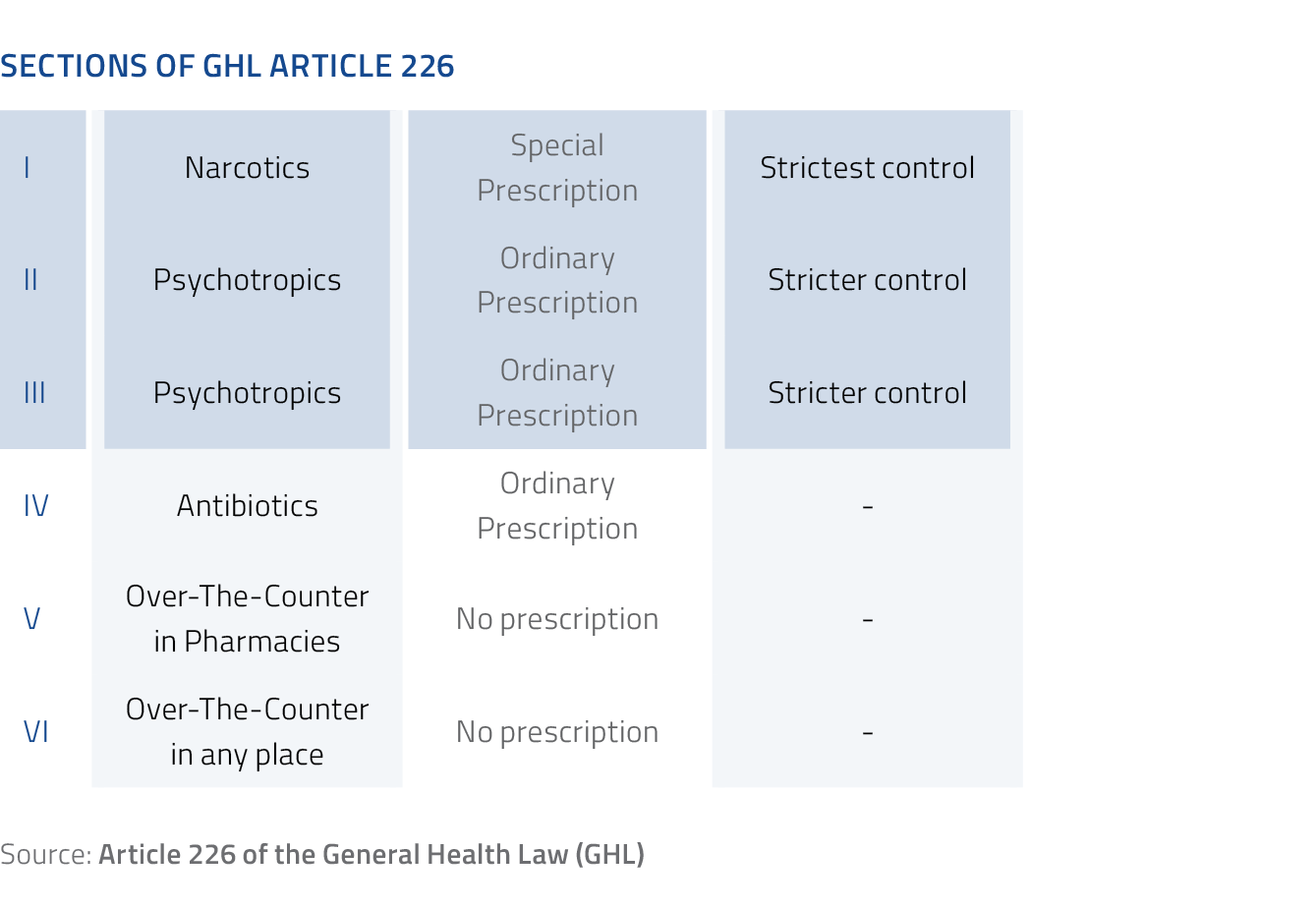 The amendment to the Pharmacopeia states that it is not applicable to sections I, II and III of GHL Article 226. Considering that sections V and VI belong to medicines that do not require a prescription, which are known as OTCs, the result is that the amendment that recognizes the digital or electronic signature applies only to the remaining section IV, which is a group that includes antibiotics.

Two related questions emerge in this regard, which correlate and result from the restrictive effect associated to NOM-151:

Responding to those questions would be important to understand and refine what the regulatory purpose really was behind the recent and current rule in the Pharmacopeia. It would also be relevant for the reasons described below.

If the intention was to promote telemedicine, particularly under the constraints of the COVID-19 pandemic, it must be understood that the amendment raised the costs for telemedicine. That ends up affecting the access to health for patients, because the providers of telemedicine will most likely transfer the increased costs to the users.

The United States, Mexico and Canada Free Trade Agreement (USMCA) contains a Chapter 19 on Digital Trade. It is interesting to note that a restriction over an electronic signature could be assessed as to whether or not it complies with the international obligations agreed thereof.

On the one hand, Article 19.2 on Scope and General Provisions recognizes the importance of avoiding unnecessary barriers.[2] On the other hand, Article 19.6 on Electronic Authentication and Electronic Signatures creates the possibility to require additional authenticating measures for a particular category of transactions. Thus, while it is possible to introduce a higher level of authentication, it needs to be proven that this is necessary.

As suggested above, requiring additional measures for authenticating and storing the electronic prescriptions for psychotropics would clearly be justified, but that would not be the case for antibiotics.

We are not there yet in terms of setting the right regulation in relation to electronic prescription in Mexico. Although the recent amendment to the Pharmacopeia was a promising step toward aligning two key pieces of the puzzle, it also introduced limitations that may not be required.

Fortunately, the Pharmacopeia is a sui generis regulatory instrument that is known for the flexibility with which it can be updated when necessary. Thus, the ideas suggested here could be fed into the next review.

At the same time, it cannot be forgotten that, there is still another key regulatory instrument that requires an amendment, the Secondary Regulations for Medical Products, to fully incorporate a clear recognition of electronic prescriptions in Mexico.

That would be required to promote effectively telemedicine in Mexico, which not only would improve access to heath for patients, particularly for the current and future pandemics, but would also help materialize the constitutional right to the protection of human health.

[2] Article 19.2, paragraph 1 states that: "1. The Parties recognize the economic growth and opportunities provided by digital trade and the importance of frameworks that promote consumer confidence in digital trade and of avoiding unnecessary barriers to its use and development." (emphasis added).

[1] Article 89 of the Code of Commerce defines "data message" as "Information generated, sent, received or archived by electronic, optical or any other technology".

Health
Are We There Yet? When It Comes to E-Prescriptions, No, We’re Not
Health
Digital Transformation, Health and Mexico’s Regulatory Framework