Cancer a Top Killer Among Men and Women

While genetic and environmental factors are known to be involved in cancer, science has not yet pegged a specific cause for specific cancers. According to the WHO, 30 percent of deaths caused by cancers can be traced back to five factors: high BMI, insufficient fruit and vegetable intake, lack of physical activity, alcohol consumption and tobacco use.

The top five killer cancers differ per gender and per country. For Mexican men, prostate, lung, liver & biliary passages, stomach and liver are the deadliest. For Mexican women, breast, uterus, liver & biliary passages, cervix uteri and liver are the main killers. Treatment is continually improving and, as a result, survival rates have and are continuing to improve. These are the main risk factors and survival rates of the cancers that most affect Mexicans.

Breast cancer campaigns and news have taken over the health media in recent years. There are more and more drugs being released to treat the condition and survival rates are high. The five-year relative survival rate for those diagnosed with stage I breast cancer is almost 100 percent. Even at stage III, the survival rate is 72 percent, according to the American Cancer Association (ACA).

More commonly known as cervical cancer, this develops in the lower part of the uterus in the area where the cervix and the exocervix meet. Most of these cancers are squamous cell carcinomas, meaning they evolve from skin cells, according to the ACA. HPV is associated with this disease, so vaccination is highly recommended to avoid contracting it and subsequently later developing cervical cancer. Although rates have dropped in countries with high levels of vaccination, it perseveres in Mexico due to a cultural stigma of the vaccination, leading some parents to refuse vaccination of their children. This cancer is easily detectable through pap smears, although this requires adequate access to healthcare services, which remains a challenge in some parts of Mexico.

Although there are several types of liver cancer, the most common type is hepatocellular carcinoma (HCC). The American Cancer Society reports that symptoms often appear in later stages of the disease, meaning later diagnoses and lower survival rates. The most common risk factor for liver cancer is chronic hepatitis B or hepatitis C infection. Other risk factors include liver damage caused by alcoholism, obesity and T2D, according to the ACA.

In many countries biliary cancer is considered uncommon. It was the eighth most common cancer in US men in 2014, 11th in UK men in 2013, ninth in Argentinian men in 2014 and seventh in Brazilian men in the same year. It is usually found more commonly in South-East Asian countries; for example, it killed the second most number of men in Singapore in 2014 and the Philippines in 2011. There are three types of bile duct cancer: intrahepatic, perihilar and distal, the latter two of which are classed as extrahepatic.

Prostate cancer is one of the cancers that most affects men worldwide and is the most common cancer in men in Mexico. There are several types of prostate cancers though most are adenocarcinomas. Links between prostatic intraepithelial neoplasia (PIN) and atypical small acinar proliferation (ASAP) with prostate cancer are under study.

The risk of prostate cancer is relatively high. The ACA explains that around one in seven men will contract prostate cancer in their lifetimes and around one in 39 will die from it. It mostly affects older men, with the average age of contraction at 66. The five-year survival rates are equally high, with a rate of almost 100 percent for men with prostate cancers in local and regional stages. This drops to 28 percent for distant stage cancers, once again highlighting the importance of early diagnosis.

Most stomach or gastric cancers are adenocarcinomas: cancers that start from the cells that line the stomach. The most associated risk factors are helicobacter pylori infection, a diet rich in smoked and salted foods, tobacco use and obesity. People with type A blood also have a higher risk of developing stomach cancer for reasons yet unknown.

According to the Canadian Cancer Society, most uterine cancers are endometrial carcinomas, whereas only a small percentage are uterine sarcomas. It is the second most common cancer in women in Mexico, although it is most common in Caucasian and post-menopausal women. Other risk factors include being overweight, never having given birth, diabetes and endometrial hyperplasia. 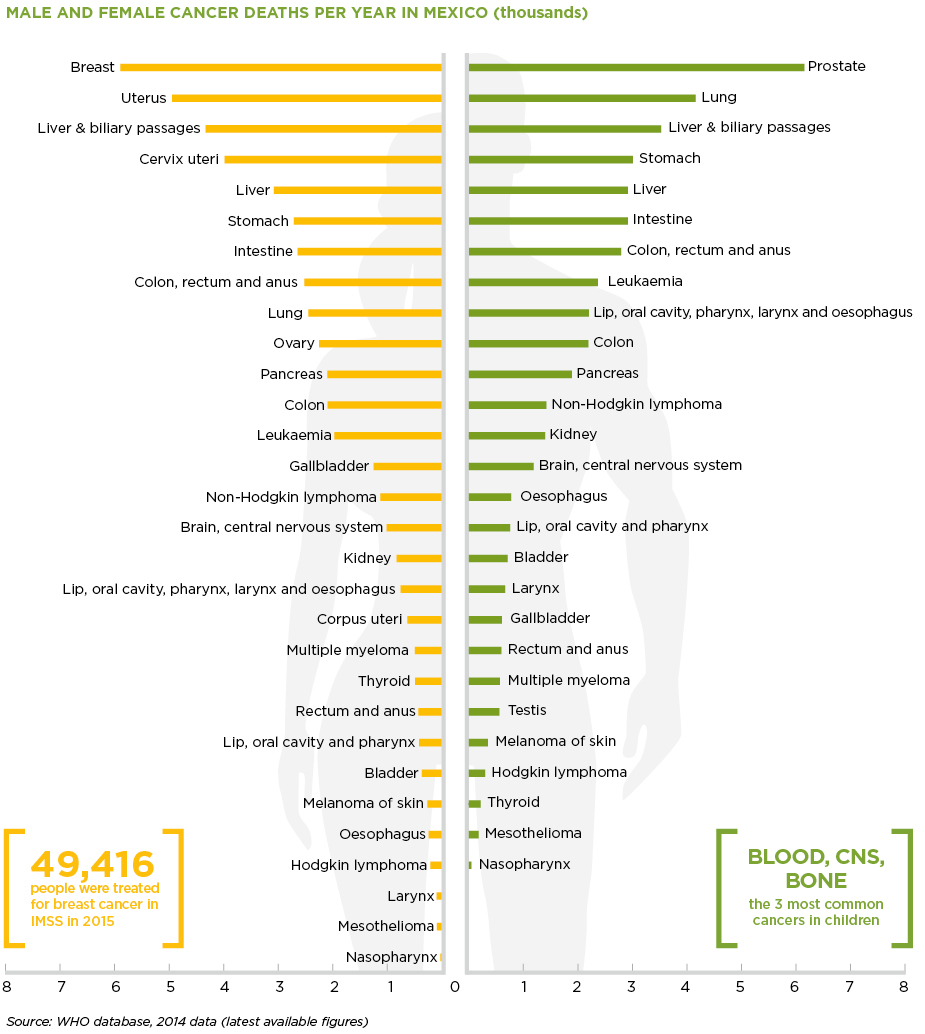