Mexico is trying to scale up its clinical research by taking advantage of its natural traits: a large and diverse population, supportive regulatory authorities and competitive operational costs

With its diverse demographic profile, a vast pool of potential volunteers and widely recognized regulatory arm that is bent on speeding up processes, Mexico has all the ingredients to become a hub for global clinical research and drug testing. Despite its numerous advantages, the country remains on the outside looking in. It carries out just 1 percent of global clinical trials, about 2,850, according to clinicaltrials.gov.

To move Mexico up the ladder, the government is working with regulators and industry associations to promote improved protocols, speed up processes and boost recognition of the country’s strong attributes, including a skilled but economical labor pool, to attract investment and help establish itself among the sector’s elite hubs. While there remains a long way to go, the establishment of a framework agreement in 2017 to promote clinical research and the clear emergence of authorized third parties, established in 2014 and now coming into their own, has created an air of optimism.

“The creation of the authorized third-party system was a great decision. The fact that the government accepted that its internal structure could not deal with the volume of demand was a good move,” says Carlos Pérez, Director General of NYCE, an authorized third party that works across sectors. 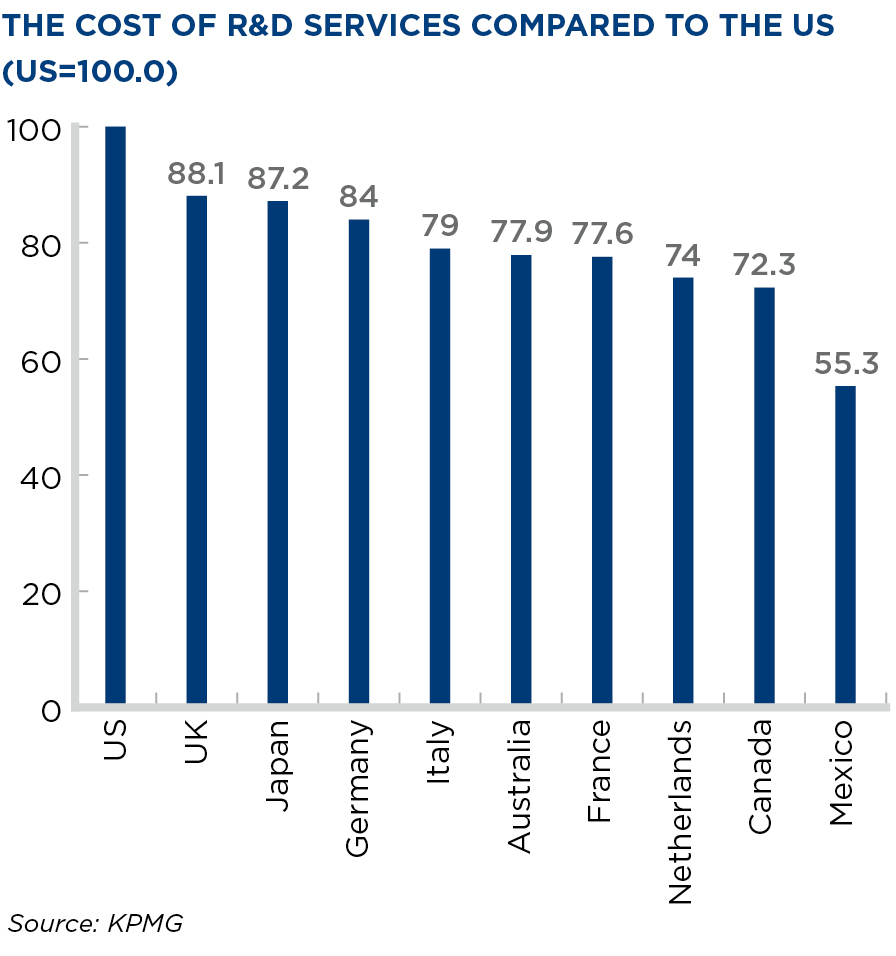 Mexico already has a foothold, standing with the leaders in health sector R&D among the countries participating in KPMG’s Competitiveness Alternative 2016 Study. In clinical research, it is strongest on T2D, landing the top spot on the KMR Group Index and among the top three for arthritis.

According to a report by Zion Market Research, the CRO market was worth US$34 billion in 2014 and is expected to be valued at US$59 billion in 2020. Pharmaceutical manufacturing companies in emerging countries in AsiaPacific, Latin America and Eastern Europe are responsible for most of the outsourcing activities due to the large population of treatment-naive patients, low labor and manufacturing costs and a skilled medical workforce, the report states.

Mexico has a diverse population of 121 million inhabitants and has more than 10 cities with over 10 million inhabitants, providing a large pool for recruitment. “The big international pharma companies have demonstrated their interest in the available patient pool, which offers a substantial opportunity to accelerate their research,” says Francisco Corpi, Latin North Regional Director of Elsevier.

To take advantage of this favorable demographic, President Peña Nieto signed a collaboration agreement in January 2017 with COFEPRIS, SAT, CANIFARMA, IMSS, ANAFAM and AMIIF to promote the development of protocols for health research, opening the door to new opportunities for the industry. According to the Ministry of Health, this agreement will make the most of the potential available of more than 83,000 doctors, 459 researches, 155 nurses, 1,786 medical units and about 62 million IMSS members and 487,000 registered with ISSSTE.

According to Corpi, the possibility of finding volunteers in Mexico has been considered a key factor for bringing clinical research to the country, although, he believes there is a concern from regulatory agencies and policymakers regarding the safety of patients. “While both Big Pharma corporations and policymakers here in Mexico are still figuring out the most adequate formula for success, we see many clinical trial opportunities lost to other countries in the region. The challenge is not just the bureaucracy of policy but it is even at the infrastructure, personnel and information level,” Corpi adds.

In May 2017, Julio Sanchez y Tépoz said during a forum with AMIIF that COFEPRIS is working very closely with the industry to create incentives for investment. New research protocols allow product approvals within 45 days, making the sector more competitive. José Viramontes, Director of Remote Site Management and Monitoring of PPD, said 2016 was an excellent year for Mexico in terms of clinical research since regulation became more consistent with the company’s internal processes. “The year closed with a meeting between the authorities and associations during which a few changes to the law were proposed. For example, Mexican law requires the involvement of three committees: ethics, research and biosafety. One proposal seeks to include only one committee, which is an approach comparable to the rest of the world. Another consideration is to run processes in parallel rather than sequentially, which can help shorten approval times.” He added that the purpose of these changes was to support industry efforts to bend both costs and the time required for drug development.

Authorized third parties, companies certified by COFEPRIS to support authorities with sanitary control and vigilance, have also played a significant role in speeding up approval times. There are 122 authorized testing laboratories, 62 units of interchangeability and bio-comparability and 26 verification units. “We have authorized a series of third parties to be much faster in clinical authorizations, which will allow Mexico to become a center of clinical research,” said Rafael Gual, Director General of CANIFARMA.

It helps to have the world leader in clinical research as a next-door neighbor. The US conducts about 103,000 studies, says data from clinicaltrials.gov. According to ProMéxico, the Mexican population suffers chronic conditions similar to those of Americans, which helps conduct studies.

For these reasons, among others, Mexico could become a reference for the evaluation of biosimilars worldwide due to its geographical location and the fact that many countries are seeking to access other markets, says Sonia Pérez, Executive Director of UDIBI. “The knowledge we gather when we perform a detailed evaluation might be useful in developing innovative molecules. Mexico has great potential but our innovation system is not articulated,” says Pérez. Similarly, Ciro García, Director General of Accelerium Clinical Research, believes conducting early phase clinical research could result in significant opportunities for Mexico, although there are constrains that are impeding the arrival of these types of studies. “There are not many international phase I studies brought to Mexico, in part because the research process requires higher quality standards and a higher degree of sophistication and organization,” García says.

While overcoming obstacles, the country must also keep up with prevailing trends such as biotechnology, an area that has captured the attention of many industry players. According to ProMéxico, there are 406 companies in Mexico that develop or use modern biotechnology and 33 percent of those operate in the health industry. “It used to be that only 20 percent of diseases were healed with biotechnology, but now pharmaceutical companies want to treat other diseases like diabetes and cardiovascular with these types of drugs,” says Annette Ortíz, Director General of Epic CRO. The main benefits of this technology are personalized treatments, reduction of adverse effects and higher control of the disease for both patient and physician, she adds. Nevertheless, companies are concerned that although the new pharmacovigilance standard developed by COFEPRIS controls the chemical medicine, it does not respond to the need for biotechnology.

Another industry trend is the need for e-services to manage information that can be used for preventive medicine or the development of biotechnological drugs. As mentioned by Carlos Oviedo, Director General of Grupo Diagnóstico Aries (GDA), Big Data applications should translate into timely disease prevention. “In this area, we would like to cooperate with local governments and companies by sharing all the information we gather to increase prevention. The Ministry of Health is the appropriate entity to use this information for the benefit of Mexican citizens,” he says.

Mexico’s attributes demonstrate it has great potential to develop research. Some companies, such as Sanofi have already taken advantage of the local opportunities. The leading pharmaceutical company has 35 active studies in Mexico, making it the second-most important clinical research unit after India for Sanofi’s emerging economies markets.