Modern medicine has been responsible for significantly improving the health and longevity of most people. Patients can now manage infectious diseases and, in some cases, diseases can be cured or have been eradicated, such as smallpox and polio. However, much remains to be done since the world still faces diseases as old as multicellular organisms, like cancer, and some that are increasing in prevalence due to epidemiological changes like those associated with old age and obesity.

Academia, pharmaceuticals and other public and private organizations are devoting huge sums to the development of new medicines to treat diseases that currently have no cure or to generate better and more effective drugs that improve existing standards. According to Evaluate Pharma, in 2017, global pharmaceutical R&D spending totaled US$165 billion and it is expected that this number will continue to grow in the coming years. 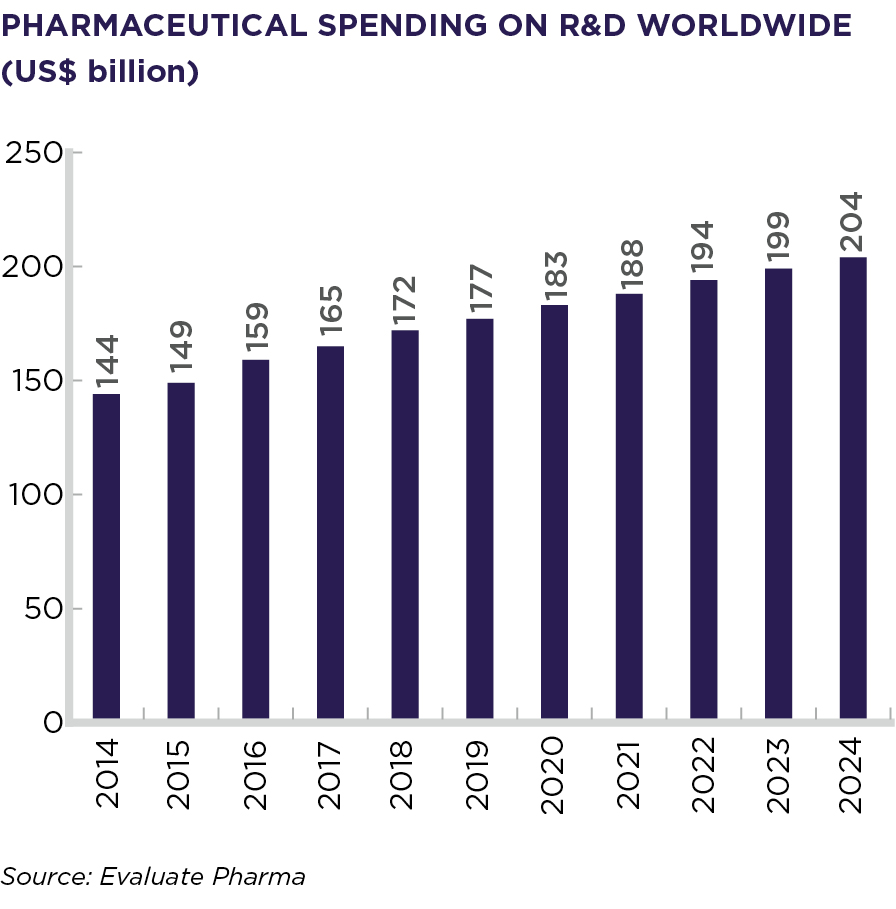 This figure might seem steep, but it is a good investment considering that the pharmaceutical market is expected to reach US$1.48 trillion by 2021, according to the QuintilesIMS Institute. This growth will be led in part by market expansion in emerging countries and a growing number of chronic diseases associated with aging and obesity.

However, the development of a new medication is an extremely slow and expensive process that takes between 10 and 15 years and up to US$2.7 billion, according to Forbes. Moreover, it is ripe with failure. Thousands of molecules are being studied at a given moment. Of these, only a few make it all the way through preclinical trials. Once a molecule reaches clinical trials, it has only a 9.6 percent chance of being approved. This makes pharmaceutical development a steep bet, but one that could result in great rewards. For instance, AbbVie’s Humira registered sales totaling US$18.43 billion in 2017 and its manufacturer expects that sales of this drug will approach US$21 billion by 2020. 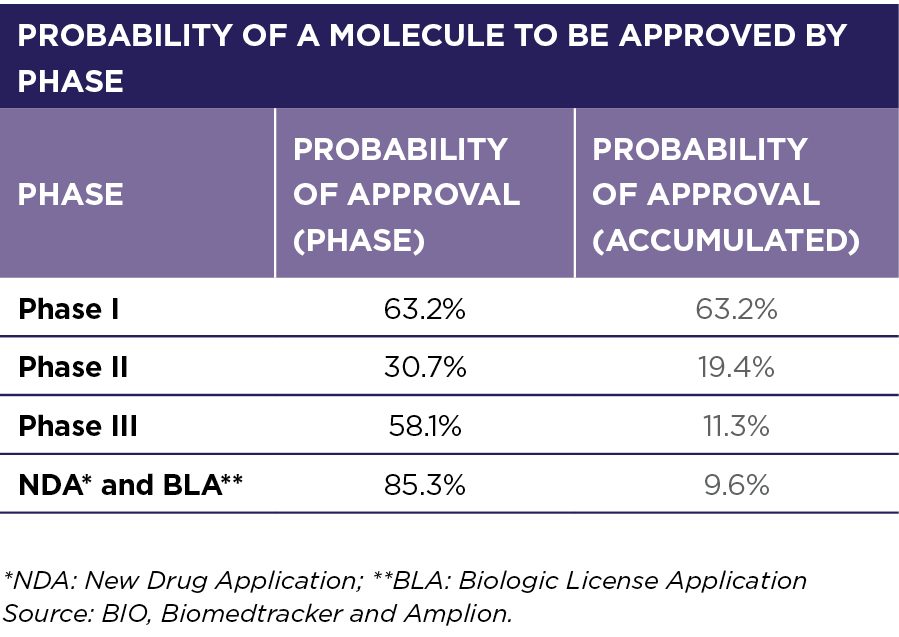 While patent expiration and the increase of competition from generics will continue to be a problem for Big Pharma, patented medicines now hold most of the global market in sales and are expected to continue this trend, according to QuintilesIMS.

Mexico is the second-largest pharmaceutical market in Latin America and it is developing its manufacturing capabilities with the presence of 20 out of the 25 largest pharmaceuticals in the world, including Pfizer, GSK, MSD, Bayer, AstraZeneca, Gilead, Novartis and Johnson & Johnson. The local pharmaceutical market has been gradually overtaken by generics, which now surpass patented medications sales in volume, if not in value. However, Big Pharma continues to the see the country as an attractive market. “Mexico is a priority country for Pfizer in terms of investment,” says Rodrigo Puga, President and Country Manager of Pfizer Mexico. “We think that Mexico will continue to be a key player for the future so we are investing in clinical research, in our manufacturing plant in Toluca and in our people,” he says. 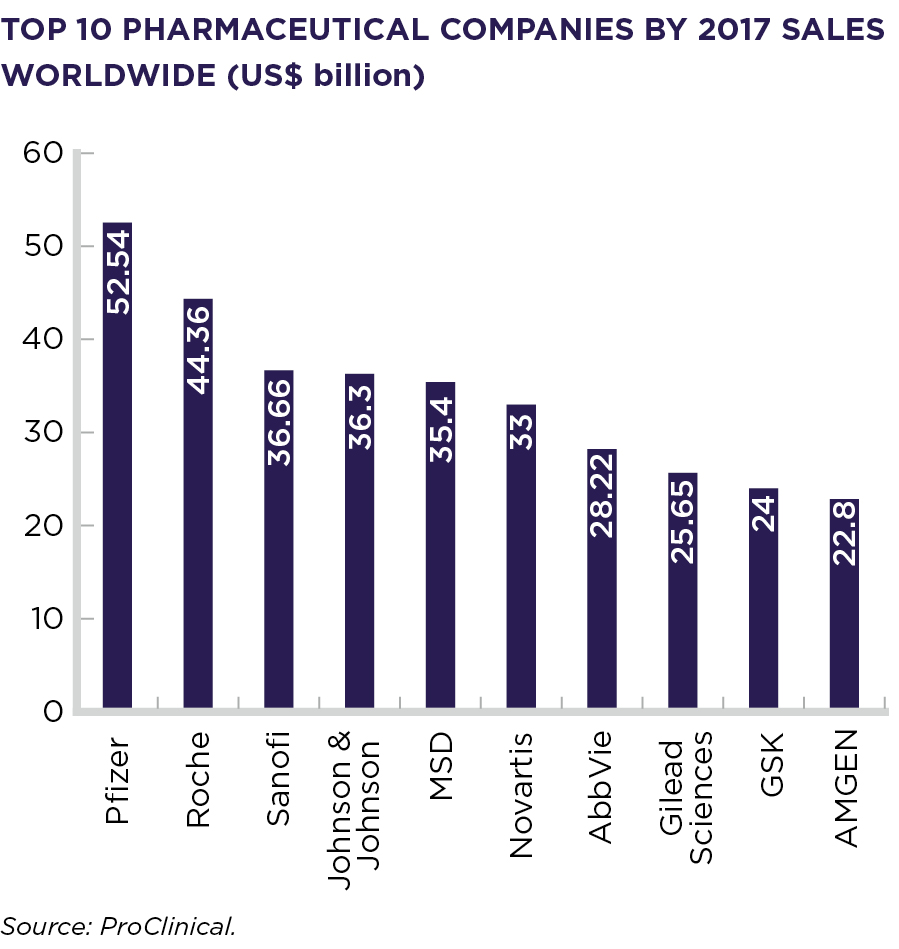 The industry has found a large and welcoming market in Mexico thanks in part to COFEPRIS, which has increased its efforts to accelerate the approval of new molecules through the generation of authorized third parties. However, the approval of a medication is not enough to make it a market success. COFEPRIS approval allows the manufacturer to sell the medication in the private sector, but that poses some challenges of its own. “While COFEPRIS has made innovative molecules available for purchase in Mexico, there is little access to these medications at private institutions because insurance penetration remains low,” says Cristóbal Thompson, Executive Director of AMIIF.

Mexico’s largest market, the public sector, is even harder to penetrate since COFEPRIS’ approval is not enough to sell a medication in the public sphere. The medicine has to be approved by the General Health Council and then it must be incorporated into each of the basic lists of public institutions (IMSS, ISSSTE, SEDENA, PEMEX and others). This process can take, on average, two years per institution and only guarantees that the product can be introduced by that institution, not that it will be bought

Moreover, this sector has been facing another problem: budget cuts. During President Peña Nieto’s administration, the sector saw its budget reduced by over MX$40 billion, according to Red de Acceso. To address these problems, a strategy to bring these products to the public sector is coming to light. “Within AMIIF, we noticed that access to innovation across the country remains below 10 percent. We are promoting a new payment model wherein institutions would pay for positive results instead of units, which would require the monitoring of the patient’s condition throughout treatment and an accurate diagnosis of the outcome. IMSS has been extremely welcoming and the institute is greatly interested in incorporating these new models,” says Thompson.

Once in the Mexican market, patented medicines face two other challenges: complex and time-consuming regulatory enforcement for IP protection and the black market. “Mexico has a significant problem with fake medicines, says Fernando Becerril, President of the Mexican Association for the Protection of Intellectual Property (AMPPI) and Partner and President of Becerril, Coca & Becerril (BC&B). “Mexico must improve its internal enforcement capabilities to be on par with the countries with which we are signing agreements.”

Concerning IP protection in the country, some lament that while Mexico’s regulations are strong their enforcement is long and expensive. “IP rights enforcement in the pharmaceutical sector is complex, as it requires first a resolution from the Mexican Institute of Intellectual Property (IMPI) that can take some years. This decision has to be validated by the Administrative Justice Court, adding more time. Even if the court supports IMPI’s decision, the offending party can initiate another legal process (amparo), which can take another couple of years to be solved. After this, it is necessary to go to Civil Court to sue for damages, adding another several years to the entire process, plus the time that it can take you to enforce the sentence,” says Lisandro Herrera, Associate at Galicia Abogados.

INNOVATIVE MEDICINES MADE IN MEXICO

While Mexico is well-known for its manufacturing capabilities, it is not as known for its research and development. Local institutions are looking to change that and convince foreign companies to bring their research capabilities to the country. “For instance, CONACYT has tax incentives programs designed to attract private investment for R&D. Through this program, companies present a project that is evaluated by experts from SHCP and CONACYT. If approved, the company is granted a 30 percent tax credit to be used within the next 10 years,” says Enrique Cabrero, Director General of CONACYT. Another goal is to support R&D efforts at local universities to reach the market. “It is necessary to fully change Mexico’s research culture to promote the transference of technology,” says Gloria Soberón, Director of UNAM’s Technology Transference Department.

The global pharmaceutical sector has faced diverse challenges in recent times, but it is still a strong and indispensable industry that shows all signs of future and continuous growth. Companies willing to operate in Mexico will find a large market, but one that is not necessarily easy to penetrate. However, it could be a good investment for those who are willing to think creatively and make long-term bets.