Stepping in to fill many gaps in the healthcare sector, the generics’ industry in Mexico has evolved remarkably in the last decade. Fifteen years ago, local manufacturers were distrusted by the general public and the medical community due to quality issues and safety concerns. Big pharmaceutical companies were acutely aware that a huge wave of patent expirations was approaching, but at the time most local manufacturers did not have the necessary resources and capabilities to be competitive. Many changes have occurred in the last five years though, leading to a robust and thriving market for generics as well as millions of Mexicans having access to world-class, lowcost generics.

The main drivers for generics are patent expirations, the implementation of more strict regulatory requirements ensuring quality and safety of generics, elimination of barriers to market entry, growth of pharmacy chains commercializing generics and own brand products, and last but not least, patients and government’s demand for low cost medicines. Today Mexico is the country with the second largest penetration of generics, representing 84% of the total pharmaceutical sales in 2013 – up from 50% in 2010 – and 45% of the market value, according to an analysis done by FUNSALUD with data from IMS Health. The generics’ market comprises branded generics sold to the retail market and pure generics sold to both public institutions and retail market. Sales to government represent 70% of the total sales of generics, which already make up 80% of the medicines bought by public institutions. On the other hand, the private label segment is the fastest growing in the private market due to the rapid expansion of pharmacy chains, growing importance of supermarkets, and increased customer loyalty and convenience in terms of cost and accessibility.

Developing more strict regulations has been key to improving the general perception of generics. Mexican Norm NOM-177 establishes the mandatory requirements – including bioequivalence studies – for generics to be approved as interchangeable with their reference products. This norm is aligned with global standards and has certainly managed to ensure safe and efficacious drugs prevail in the pharmaceutical market, such as patented medicines and interchangeable generics. Besides, low quality and counterfeit products have been phased out of the market. Rafael Gual, Director General of CANIFARMA, explains the strength of generics lies in increased trust in their safety and efficacy and in the fact they are provided to a large number of patients at low costs.

The government has also implemented an effective pharmaceutical policy aimed at improving access of the population to a well-supplied drug market comprising both innovative and generic medicines. According to COFEPRIS, since 2012, 357 generic drugs have been released with 32 active substances to treat 71% of the mortality causes in Mexico. This has resulted in accumulated savings of more than US$1.5 billion and allowed to treat more than 1.12 million additional patients in the public sector. Moreover, generics’ prices have been reduced by an average of 62% in the private market. Prices for atorvastatin and bicalutamide, for instance, are 89% and 88% lower compared to the innovators’ respectively. Drugs for diabetes and cardiovascular diseases are actually 83% and 55% lower in Mexico than the average in South American countries. This has ultimately made the Mexican generics’ industry more competitive, capable of expanding to other countries and attracting foreign investment.

Another important area of growth for local companies and manufacturers are OTC products. IMS Health estimated the growth of the market for OTC products will grow by 21.4% between 2011 and 2016. Nevertheless, some of the big players in this market have faced several difficulties in supplying drugs this year as a result of major issues affecting the distribution segment. The most relevant areas are gastrointestinal disorders, pain, vitamins, respiratory problems, and dermatological products. Additionally, COFEPRIS has taken important steps regarding tightening of regulations for OTC products as to prevent miracle products from expanding in the market. The future for generics in Mexico seems promising. Quality is increasing and there is a consensus among consumers and physicians that generics are as effective as innovators, creating strong opportunity for competition with big pharmaceutical companies. 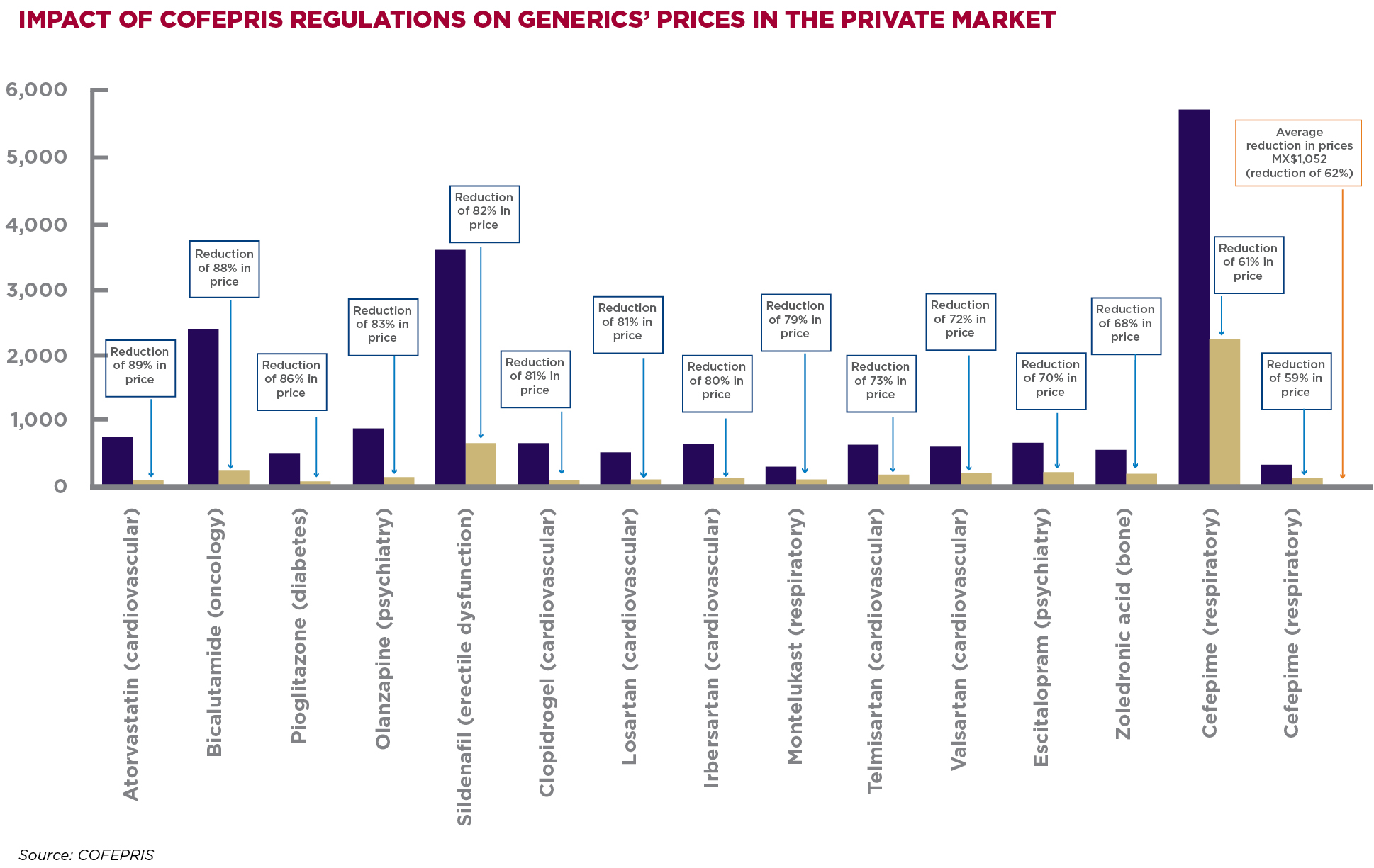