Health Challenges in One of the World's Biggest Cities

Q: What steps is the Ministry of Health taking to quash disinformation and spread knowledge on health issues? A: Mexico City has spearheaded the promotion of health information. We have launched campaigns on every topic imaginable and we have also printed 1.4 million copies of a book on health for distribution to children in elementary schools. It covers such topics as dental health, nutrition and general hygiene. We have a second book on sexual health with over a million copies in print. It touches on all related topics. A third book covers addictions: alcohol, tobacco, drugs, myths and truths.

We must incorporate health as a subject in schools. I am convinced that the only way to make people co-responsible for looking after their health is to empower them through knowledge and understanding. If the information is provided to children, they will have it when they in turn become parents. For example, children do not brush their teeth properly because their parents cannot show them how. This is why nine out of 10 children in primary school have cavities and in secondary school they all have cavities. On average, adults loose seven to nine teeth after the age of 60; they cannot chew or bite, they begin to have gastrointestinal problems and become malnourished, so they get osteoporosis and they fall and break a bone. This is why it is so important to teach dental hygiene and the same goes for sexual health.

Q: Why has health education not been integrated into school curriculums?
A: It is a political decision that has not been made. What could be more important than children learning how their body works, the risks they face and what needs to be done to preserve their health and life? This needs to be done today, but it may take years. Still, the seeds need to be sown or in years to come we will continue to face the same issues. Our children can lose 10 years of life due to overweight and obesity. At home, children are given portions to eat that are the same size as those the parents eat. We need to change the consciousness of parents. We also need to seek help from teachers.

When I was studying medicine, I was taught to cure sick people, not to keep people healthy. This is good but doctors should also know how to look after people and point them in the right direction to staying healthy. The healthcare system cannot handle the number of sick people who did not look after themselves and did not go for regular checkups. In addition, care becomes extremely expensive. Stents cost MX$25,000 (US$1,389) and some people may require three or four. Dialysis costs MX$2,000 (US$111) per session and sufferers may need three sessions per week for the rest of their life. There is no wallet or public budget that can withstand this.

Q: How has the Ministry of Health promoted a preventive health culture and what is its view on vaccinations?
A: In the swine flu pandemic that took place in Mexico City in 2009 I had to make a historic decision: to close the city to protect residents. This taught us that we were vulnerable. When the vaccine arrived, there was much confusion and fear of the vaccine because the Minister of Health of another state had commented that it caused Guillain-Barré Syndrome. We refuted this, but the fear was terrible. Even health personnel did not want to get vaccinated.

To set an example and prove the vaccine was safe, I was the first to be vaccinated. Thankfully, former Minister of Health José Ángel Córdova negotiated with Sanofi and distributed stocks of the vaccine to all the states of the country. One

day, he called me and told me that, despite the Ministry of Health’s investment, people refused to be vaccinated. He asked me to find a way to get it done. I had the idea to place the vaccination stands in the city’s metro, which sees foot tra c of around five and a half million people per day. We put stands in the biggest stations and o ered free vaccinations. As a result, people were lining up. I took Minister Córdova to visit the stands along with the press and word got out that the people of Mexico City were getting the vaccination. This created a domino e ect. Vaccination stands were placed in public areas throughout the country. This was the start of a culture of care and prevention.

From 2009 to the present, we have been vaccinating without a problem. In winter of 2016-2017, Mexico City saw 23.6 percent fewer cases of pneumonia and bronchopneumonia than in 2015/2016, the number of acute respiratory infections remained stable while there were 56.6 percent fewer cases of influenza. There were only 10 deaths this winter, compared with eight last winter in a city of millions of people. The virus we expected to be most prevalent was H3N2 but it was actually H1N1.

From 2016, two oseltamivir generics have been available but people continue to associate the active ingredient oseltmavir with the brand Tamiflu and refuse to buy generic versions. Now, we have enough oseltamivir in stock to cover both this winter and the next. One issue is that when a family member gets influenza, everyone in the family takes some of the medicine as if it were preventive, which it is not. There is also the issue of rapid testing, which results in false positives or false negatives 50 percent of the time. My recommendation is to seek out a clinical diagnosis only.

In addition, it is pointless getting vaccinated in February or March, as the influenza season ends in March and the vaccine takes 45 days to reach the maximum level of protection. The best time to get vaccinated is in September or October. The aim of the Ministry of Health was to vaccinate 2,447,344 people in Mexico City, 1,003,426 of which belong to my ministry. Mexico City met 98.8 percent of that goal. 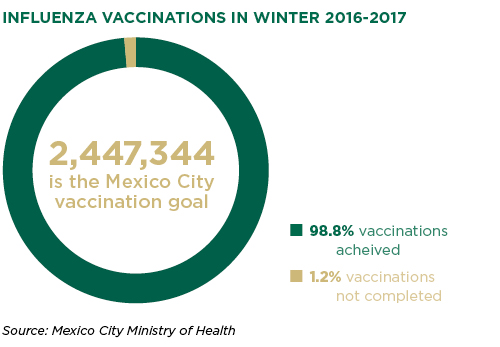 In addition to influenza, we have vaccinated against rotavirus and pneumococcus. Everyone in a risk group should get vaccinated including pregnant women, children, elderly, diabetes sufferers and those who suffer from chronic respiratory illnesses.

Q: What will the Ministry’s priorities be in 2017? How will it distribute resources to achieve them?
A: The greatest priorities will be to consolidate the infrastructure that we already have, to improve the equipment, to prepare and train our professionals and to launch a campaign on dignified treatment. In addition, we will continue to promote health and prevention and early diagnosis. Without a doubt, the Médico en tu Casa (Doctor in your House) program, which has sent doctors and nurses to knock on doors to seek out sick people, has been a successful experience and we will consolidate the strategy by making free health services a reality.