Mexico and the Global Innovation Index (Pt. I)

In September, the World Intellectual Property Organization (WIPO) published the 14th edition of its Global Innovation Index (GII), which “provides new data and analysis on the state of global innovation and allows readers and policymakers to benchmark the innovation ecosystem performance of more than 130 economies.”  For this year, publishers included a special section focusing on “Tracking Innovation through the COVID-19 Crisis.”

In this report, analysis focuses on the global positioning of Latin America, as well as on the position of Mexico.  Switzerland has consistently led the GII ranking in recent years. In 2021, the European nation is followed by Sweden, the US and the UK. South Korea deserved special attention after moving from 10th place in 2020 to fifth in 2021. On the other hand, the Netherlands lost four places during the period 2018-2021, moving from second to sixth. 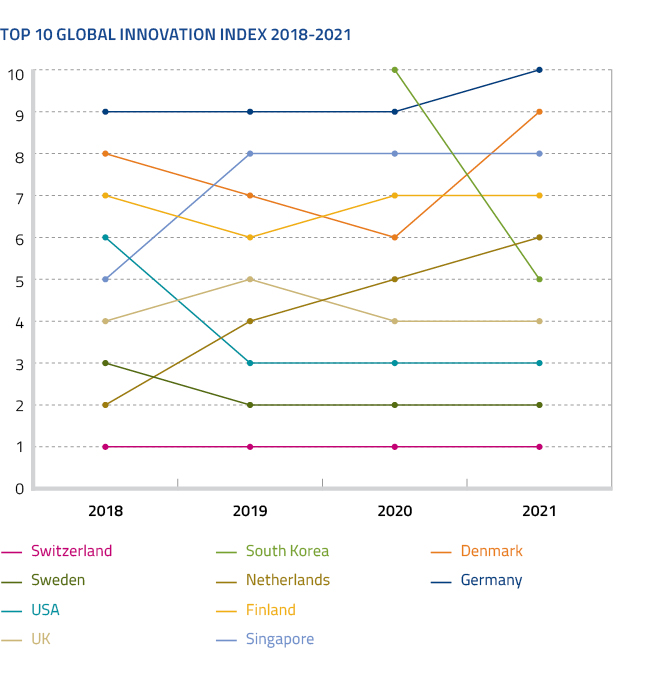 At the Latin American level, the study includes the 18 most important countries in the region.  Chile has led the ranking throughout the past four years, despite the fact that its score has decreased considerably during the period of analysis. Mexico is second in 2021, displacing Costa Rica, which now ranks third, just before Brazil, which moved from sixth to fourth place in these four years. With the exception of Brazil, no country in the region has achieved a considerable improvement in both the regional and the world ranking. The rest of the Latin American nations have remained in the same position or have climbed or decreased very little in recent years. 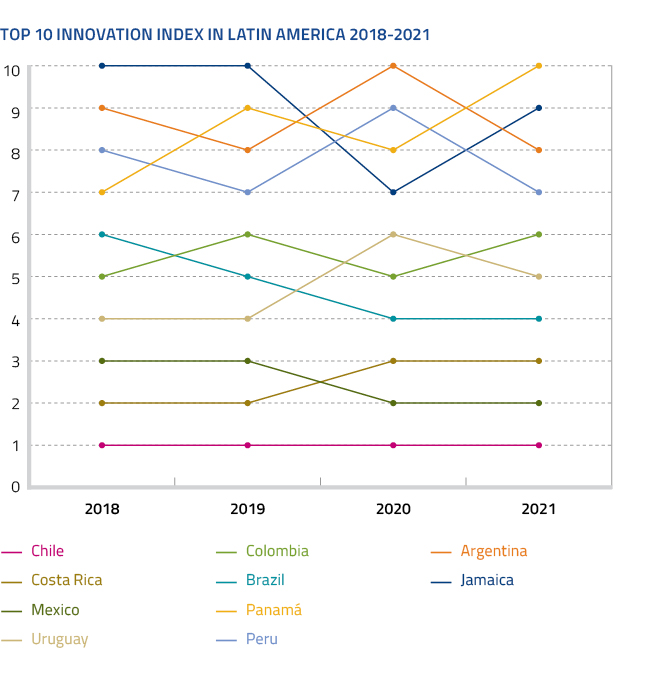 Specifically, in 2021 Mexico ranked 55th globally; ninth within the “upper-middle” group (upper-middle income); and second within the Latin America region. From 2018 to 2021, the North American country has not been able to improve its position within the global ranking by more than one position.

The Global Innovation Index assesses all WIPO countries on a single economic profile through “pillars” and “subpillars.” The publication distinguishes seven pillar categories: Institutions, Human Capital & Research, Infrastructure, Business Sophistication, Market Sophistication, Knowledge & Technology outputs and Creative Outputs. Each pillar is scored with a rating ranging from 0 to 100 according to their performance during the year of assessment. Furthermore, the computed score allows countries to be compared to one another and to construct a global ranking. The higher the grade in the pillar or subpillar, the better the position within the global ranking. 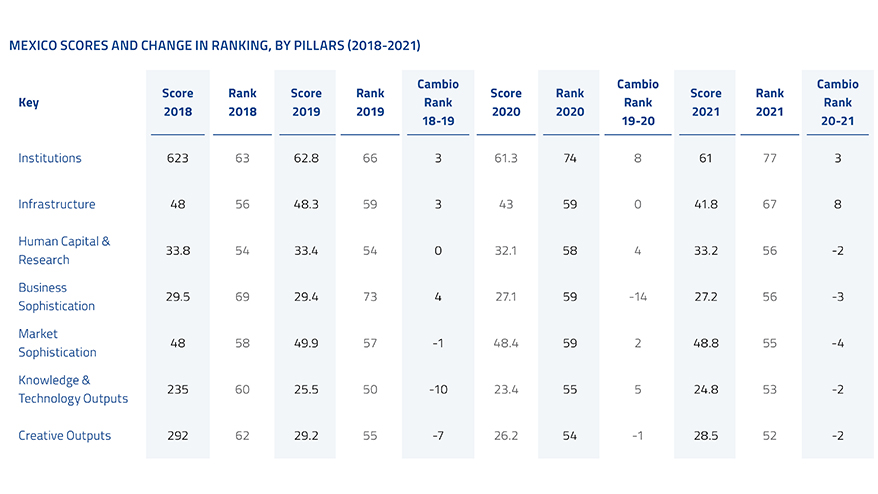 During 2021, Mexico ranked highest in Creative Outputs (52nd), Knowledge & Technology outputs (53rd) and Market Sophistication (55th); whereas it ranked lowest in Institutions (77th) and Infrastructure (67th). It is worth mentioning that both Institutions and Infrastructure have had a significant loss in their evaluations, losing 14 and 11 positions respectively since 2018. On the other hand, Business Sophistication and Knowledge & Technology have improved 13 and seven positions, respectively since 2018.

The analysis of this report at a global and regional level facilitates the identification of the variability in the positions within the pillars analyzed year after year. Moreover, presenting data for a period of four years allows readers to observe why Mexico has consistently lost significant ground in key competing indicators relating to political environment, regulatory environment, business environment, information and communication technologies (ICTs), general infrastructure and ecological sustainability.

In the next article, a specific analysis of the main subpillars of the report and their strengths and weaknesses will be addressed, as well as some elements for reflection focused on strengthening these criteria in the midterm.