A Modern Policy Frameworf for a New Era of Healhcare

Q: What is the origin and function of COFEPRIS?

A: Historically Mexico did not have an autonomous body to execute policies relating to pharmaceuticals, so all registrations were issued through the Ministry of Health. In 1984, constitutional reforms declared health a universal right in Mexico, although the tools to implement this reform were not available until 2001 when Julio Frenk, the Minister of Health at that time, made the changes to the General Law of Health that created a financing entity for public healthcare, known as Seguro Popular, along with the regulatory agency COFEPRIS. The mission of COFEPRIS is to protect the population from sanitary risks by means of several powers such as preventive measures, the issuance of new regulations, combating informality, and the power to act in the case of an emergency. The establishment of COFEPRIS was the first step in creating a modern policy framework for the regulation of pharmaceutical goods, and has driven significant increases in government drug purchasing to achieve universal coverage. Drug registrations have in reality been conducted in Mexico since the 1920s; however, because manufacturers were not required to renew their registrations, information on the number of products available in the market was practically nonexistent. Only in 2005 did renewals become mandatory for all medicines, vaccines, and medical devices, which was a great step forward for the industry in terms of quality and regulation. Today, the value of products regulated by COFEPRIS represents 9.8% of the GDP, including the food industry, tobacco and alcoholic beverages, drugs, chemical products, fertilizers and pesticides manufacturing, and medical, dental and ophthalmic disposable materials. 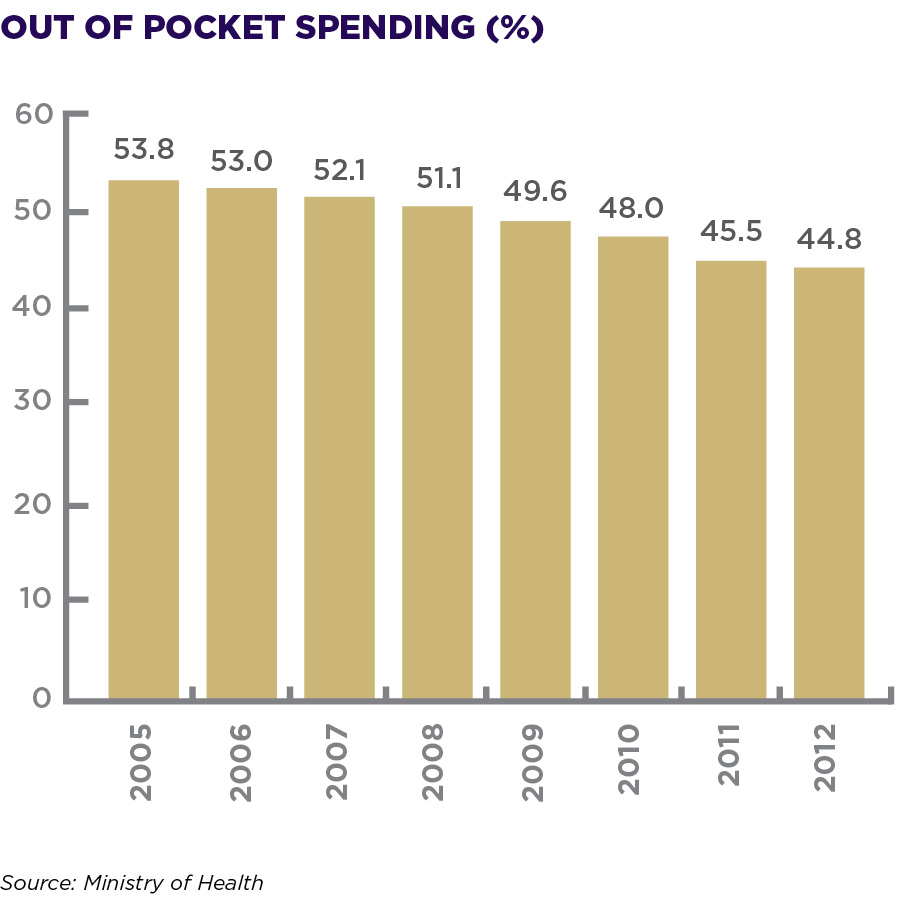 Q: What have been the key elements of your strategy since you were named Federal Commissioner?

A: With so many registrations and renewals being requested after 2005, COFEPRIS faced a crisis by 2010, at which point 8,000 marketing authorizations were unattended due to inefficient processes. This had a negative impact on the market and meant that few products were available, at high prices, to the point where COFEPRIS was not globally competitive. After being named Federal Commissioner in 2011, the first strategic move made by my team was to expand access to medicines. The policy we implemented was focused on opening up access to more alternatives for medicines, vaccines, and medical devices. In 2010, 152 registrations were issued, and since 2011 we have issued more than 24,800, representing a market expansion of around US$2.4 billion, as well as a 16,300% increase in the number registrations.

We adopted two specific policies in order to empower the consumer. Our first concerned generics and involved unblocking 32 active substances related to 71% of mortality causes in Mexico that did not have generic versions despite their patents already being expired. Not surprisingly, these drugs had the highest prices in Latin America. We identified the clinical applications related to those 32 substances, separated them by groups, and issued joint generics authorization. The economic impact was positive, creating competition among the generics that entered the market at the same time. By March 2015, 357 new generics made from these 32 active substances were on the market, representing savings of US$1.5 billion and an average price reduction of 61% for both public and private sectors. In fact, drug prices prescribed for the three main causes of mortality in Mexico – cardiovascular diseases, diabetes, and cancer – decreased 91% on average. Furthermore, while generics represented 54% of the volume and 30% of the value of the total pharmaceutical market in 2010, these figures reached 84% and 52% of the total market in 2014, respectively.

The penetration and growth of generics in the market comprises one of the best examples in the world on how to improve access to medicines. Our other strategy is to launch new molecules on shorter timeframes; at one point we had the world’s slowest approval times. FDA and EMA approval did not add value to our authorization process, and the cost of this approval was also very high. As a result, we implemented an innovation-focused policy in 2012, and began to authorize applications from FDA and the European Union within 60 working days. The number of new molecules registered increased from three in 2010 to 150 between 2012 and 2015. In addition, prices dropped from MX$6,000 for a molecule for cardiovascular diseases to MX$1,000, with per capita expenditures dropping from MX$2,000 in 2010 to MX$700 in 2014-2015, on average.

As a policy maker, my main task is to protect the consumers from health risks. Household expenditure on health care products has dropped from 5% (of total household expenditure) in 2006 to 2.5% today. Our measures have been effective in reallocating resources, helping families to reduce their expenditure on medicines and use it for other necessities. We have also managed to generate equilibria as a consequence of other policies of ours that have favored innovative manufacturers. We are now more competitive in terms of authorizing clinical trials and attracting these to Mexico by means of two specific agendas. IMSS is both the country’s biggest supplier of medicines and the biggest employer of doctors. Mexico’s National Institutes of Health are highly specialized in many diseases and their research can compete with developed countries. We have authorized both IMSS and the National Institutes to pre-review and authorize clinical trials, reducing authorization from 3 months to 1 month. This promotes innovation in the country and presents an appealing message for investors. One key element in bringing clinical trials to Mexico is the time regulatory agencies spend on approving study protocols. Although 60% of trials are conducted in the US – with most of the rest taking place in Europe – we were also losing money to Costa Rica and Colombia. To make Mexico more competitive we needed to sort out backlogs in the authorization of clinical trials. This industry invests US$80 billion annually, of which only US$300 million reaches Mexico.

Q: How does the PAHO certification and recognition by other international bodies help Mexico?

A: Such recognitions have an impact on the balance of trade. Though Mexico is a manufacturing country, we have a trade deficit in pharmaceutical products because we neither innovate nor export enough. Three years ago, the international agenda was relegated, so COFEPRIS did not have a recognized presence in the world despite

our excellent scientific assets. We received the PAHO certification in 2012 to become the fifth reference agency in Latin America. Sanitary registrations issued by COFEPRIS are currently recognized in seven Latin American countries: Ecuador, El Salvador, Colombia, Chile, Costa Rica, Panama, and Belize. Exports have benefited from other countries’ trust in Mexico. In the past, for every US$1 we exported we were importing US$7. Now the ratio is 1 to 5, with exports increasing 30% in the last two years.

Q: What are the main objectives of the new biopharmaceuticals regulation?

A: Since 2009, following reforms to the health legislation, biopharmaceuticals have been recognized under Mexico’s legal and regulatory framework. Such products have strong growth potential since our per capita consumption is US$1 a year, compared to US$120 in developed countries. New regulations provoked controversy, since some biosimilars registered as generics were bought by the IMSS and ISSSTE. Safety was of huge concern due to the lack of the necessary clinical trials. To balance innovative biopharmaceuticals and biosimilars, we set up strict requirements for such products. The regulations issued in December clearly state that authorization of a drug depends entirely on clinical trials proving the safety and efficacy of that drug. Innovative products are the reference for comparability tests on new biosimilars, while established biosimilars have a timeframe in which they can be characterized. Those who fail to comply will be phased out. With the rules now widely available on how to launch biosimilar products, local manufacturers can comply with the market’s entry requirements more easily. The legal and regulatory pathway is now clearer here than in many Asian, East European, and Latin American markets, so we expect a lot of investment to come to Mexico. Our regulations are based on EMA standards, currently the highest measure for biosimilars authorization. Finally, active pharmacovigilance in the National Institutes of Health has already been implemented for these products.

Q: What can you tell us about COFEPRIS’ concerns of so- called ‘miracle products’?

A: We have a policy of zero tolerance for these products. A reform was issued in 2012 to regulate the advertising of products that are not registered as medicines but are sold based on treatment capabilities and curative promises. That year, we phased out 60 products and 3,500 TV spots per month. Then we obliged TV companies to ask for sanitary registration before selling advertising spaces, enabling us to eliminate these products from television. Because we have official powers to attack the illegal market, our first target was “miracle” products, a non-regulated sector which poses  a risk to public health. As a non-regulated sector, more than 2.5 million units of miracle products were banned during 2011-2015, compared to 40,000 in 2010. Our task now is to ensure that all advertising of registered products is very clear and does not provide misleading information.

Q: The approval process for medical devices has changed of late. How will this improve the sector in the short-term?

A: A risk analysis we conducted in 2011 led us to deregulate a market of 14,000 registered medical devices. Up to that point, the number of requirements for both simple and complex devices was the same, and this represented a huge obstacle for market entry. This policy’s first phase deregulated 1,669 products as medical devices, which represented 12% of the total market and saved the industry around MX$4 billion. Last December’s second phase deregulated 573 more devices, lowering prices, boosting access, and saving MX$1.4 billion. A new policy was also issued, recognizing medical devices from Japan, the US, and Canada and authorizing them within 30 working days. Now, these foreign products represent 20% of the total medical devices industry in Mexico. A fast turnaround time is vital, since updated versions of medical devices are often released within 6 or 8 months. Third parties are now pre- authorized to register medical devices, decreasing approval times from 30 months to 20 working days. To incentivize the industry’s growth access must expand. The Mexican formula to accelerate growth and improve access to medical devices has been quite straightforward. Growth stood at 1.8% during 2008-2010 and increased to 20.3% in the 2010-14 period. There is a clear correlation between efficient regulation and industrial growth.

Q: What was COFEPRIS’ contribution to taxes on sugary drinks and the ban on TV advertising promoting unhealthy food?

A: The tax was launched by the Ministry of Finance as part of the agenda to attack obesity. The three-point plan consists of prevention, medical attention, and regulation. Our responsibility were the regulations implemented in February 2014, which prohibited TV advertising during programs with audiences predominantly consisting of children. As a result, we were able to reduce the amount of spots of these products by 40%. Our new processed food labelling policy has taken effect in July 2015, meaning that companies have to be very clear on both their products’ total calories and the percentage of daily calories each portion represents according to the source of nutrients. The National Institutes of Health supported this initiative, which is intended to work in an integral manner to fight obesity.

A: First, we must keep expanding the market, internally and externally, helping to tip the balance of trade. Renewing our PAHO certification is another important priority ahead of our audit. Another target is the illegal market. Expanding our robust formal market is our primary weapon, while informing consumers that prices are lower in the formal pharmacy stores than in the informal market is another. Finally, COFEPRIS remains committed to protecting the population from sanitary risks. As a result, we expect to deliver even better results both to consumers and the industry as a whole. 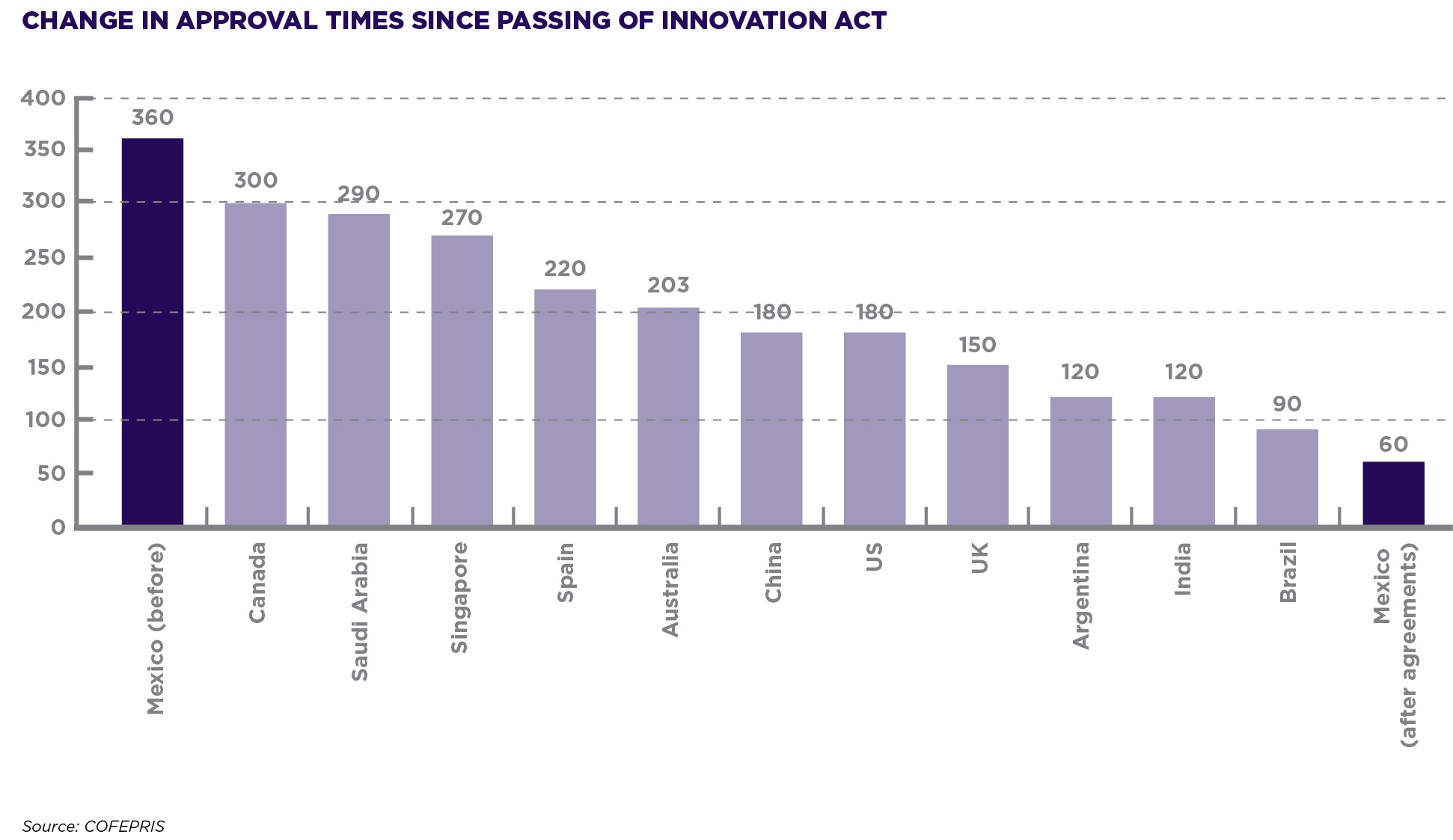