With a decline in manufacturing ready to turn around, Mexico has a number of advantages that could make it a production powerhouse, including its regulatory agency, a strong workforce and lower manufacturing costs. How it deals with logistics will also play a significant role in the sector’s future

However, the Mexican manufacturing sector has faced some obstacles in the last few years that have resulted in a decrease in production. In 2017, according to Global Insight, Mexico’s manufacturing production stood at US$9.28 billion, which is a contraction of 3.73 percent compared to the previous year. In fact, manufacturing production has been steadily decreasing since it peaked in 2013 at US$12.33 billion, according to INEGI. “During the past 10 years, we have seen a contraction in manufacturing by international companies. As the international industry declined, the manufacture of generics grew at a highly accelerated pace,” says Sergio Naveda, Director of Grupo ACF. Pharmaceutical production is expected to make a gradual turnaround and reach US$11.26 billion by 2022, according to Global Insight.

Another problem that manufacturers had to manage in recent years is compliance with all regulatory requirements. “Regulators have sometimes acted as barriers to local manufacturers, causing a lack of full coverage for about 40 percent of the medicines Mexicans need. For that reason, 2017 was a complex year for the Mexican pharmaceutical sector,” says Víctor Soto, Director General of Distribuidora Levic.

INEGI states that there were 793 pharmaceutical manufacturing facilities in the country in 2016 that were responsible for US$1.38 billion in exports that year. At this point, the pharmaceutical manufacturing industry represents only 0.5 percent of GDP and 2.9 percent of the manufacturing GDP, according to ProMéxico. However, the country has significant advantages that could make it a pharmaceutical powerhouse, including its regulatory agency, a strong workforce and lower manufacturing costs than neighboring countries. According to KPMG, a medicine that is manufactured in the US at a cost of US$100 can be produced in Mexico for only US$82.9. The National Association of Medication Manufacturers (ANAFAM) states that the industry generates 78,000 direct jobs and another 273,000 indirectly.

The work done by COFEPRIS, Mexico’s regulatory unit for pharmaceuticals, has also been considered essential for the development of the industry in Mexico and internationally. “COFEPRIS has done significant work to facilitate pharmaceutical exports from Mexican companies by acquiring WHO certificates. This places Mexican products at higher standards of quality,” says Efrén Ocampo, President of Grupo Neolpharma.

The US is Mexico’s largest trade partner and the rocky situation between both countries has led to some uncertainty in the sector, especially for exports. “All industry members are closely following the modernization of NAFTA with full understanding of its complexity,” says Cristóbal Thompson, Executive Director of AMIIF. However, Mexico has many more trading choices beyond North America. “The industry is looking beyond NAFTA to other agreements such as the CPTPP,” says Thompson. Mexico’s FTAs with 46 other countries might make the country an interesting bet, even if NAFTA negotiations were to turn sour. “Compared to the automotive industry, we depend less on American raw materials. We generally bring products from India, China and some European countries to diversify our supply source. Mexico generates high export flows toward South and Central America,” says Miguel Ángel Marín, CEO of Industrias Sintoquim. 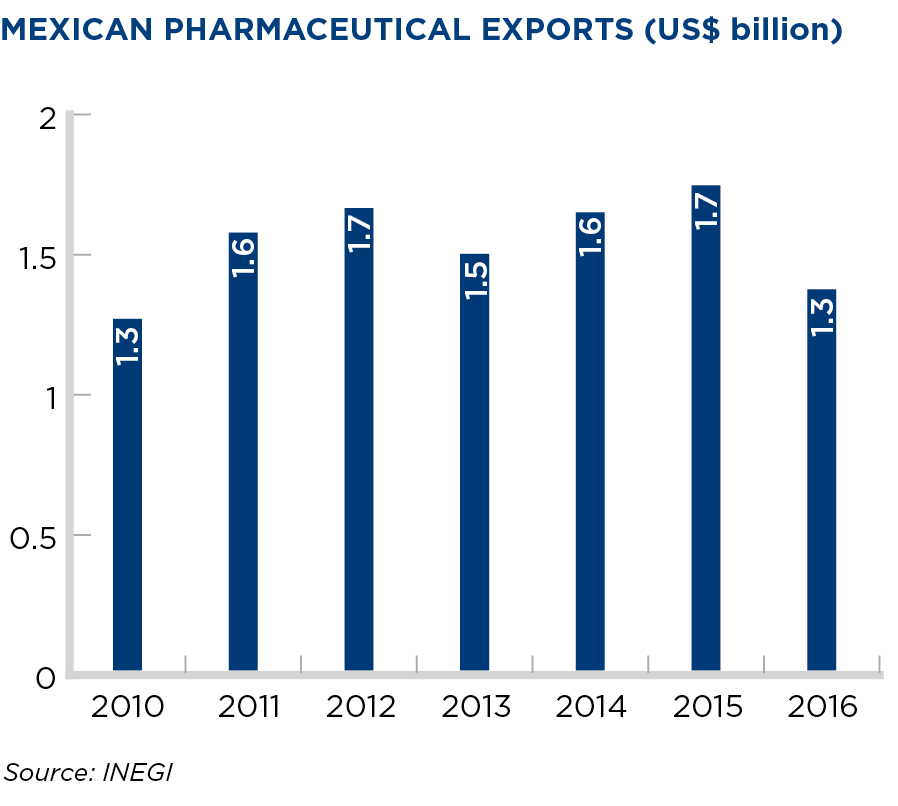 Once manufactured, the delivery of medications also poses a challenge due to the delicate nature of the products, which often need to be stored and transported under extremely controlled conditions. “The pharmaceutical sector is among the industry’s most regulated. For this reason, logistics operators have invested significantly to ensure the integrity and safety of these products by generating the right conditions for storage and transportation,” says Aldo López, President of the Mexican Association of Logistic Operators (AOLM).

The aim of cold-chain management is to ensure the correct handling of temperature sensitive pharmaceuticals at all points in the distribution chain to ensure that the products do not lose effectiveness. The 9th edition of the Biopharma Cold Chain Sourcebook predicts that the number of products that will require cold-chain management will continue increasing globally at a double-digit rate, caused in part by the rise of biological medicines. The book projects that 26.8 percent of 2018’s total pharmaceutical logistics costs were spent in the transportation of medicines under cold-chain conditions.

Moreover, it predicts a 53 percent growth in the number of medicines that will require transportation under coldchain conditions between 2016 and 2022. In comparison, overall biopharma sales will grow only 29 percent during that same period. 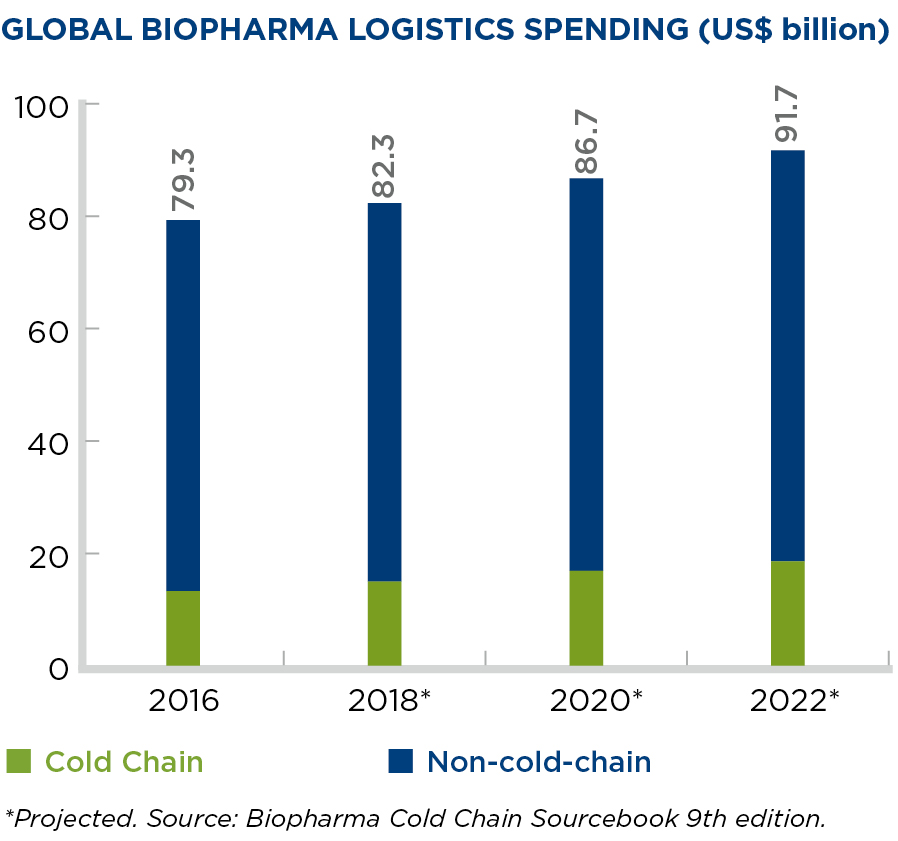 The growth of cold-chain logistics is in turn leading carriers to invest in the generation of storage equipment and strategies that can ensure the integrity of the products during the entire transportation chain. For instance, Napoleón Gómez, Country Manager of World Courier, points to the company’s product Cocoon to maintain packages at specific temperatures as a competitive advantage.

Mexico, similarly to other Latin American emerging economies, also faces specific challenges. In its latest report Pain in the Chain Healthcare Survey, UPS identified cost management and contingency planning as two areas that require greater attention to improve logistics. The report addresses four central issues in the supply chain for the global health sector, which are product safety, regulatory compliance, product damage and deterioration and management of storage and transportation costs. Latin American countries obtained the lowest scores in product safety and the main problems identified were the lack of physical protection against theft, the presence of parallel trade and poor supply-chain visibility. López explains that third-party logistics (3PL) also face other problems in the country, such as poor road infrastructure and safety.