While Mexico has focused on growth and economic stability for the past few years, the country has fallen behind on R&D. In 2014, Mexico held the 66th position on the Global Innovation Index Ranking. R&D is of extreme importance to economic development as innovation is created through research, the use of human capital, and existing knowledge development. The country has made considerable efforts to develop this area but so far results have been limited. According to the OECD, R&D represented 0.54% of the GDP in 2014 which is considerable lower than the 2.36% average of other OECD countries. Recently, President Enrique Peña Nieto’s administration pledged to increase healthcare R&D expenditure to 1% of GDP by 2018 and subsequently fund more programs to produce highquality research in related fields such as biotechnology and health. Dr. Enrique Cabrero, Director of the National Council of Science and Technology (CONACYT), believes that the country will be able to reach this goal by 2018. 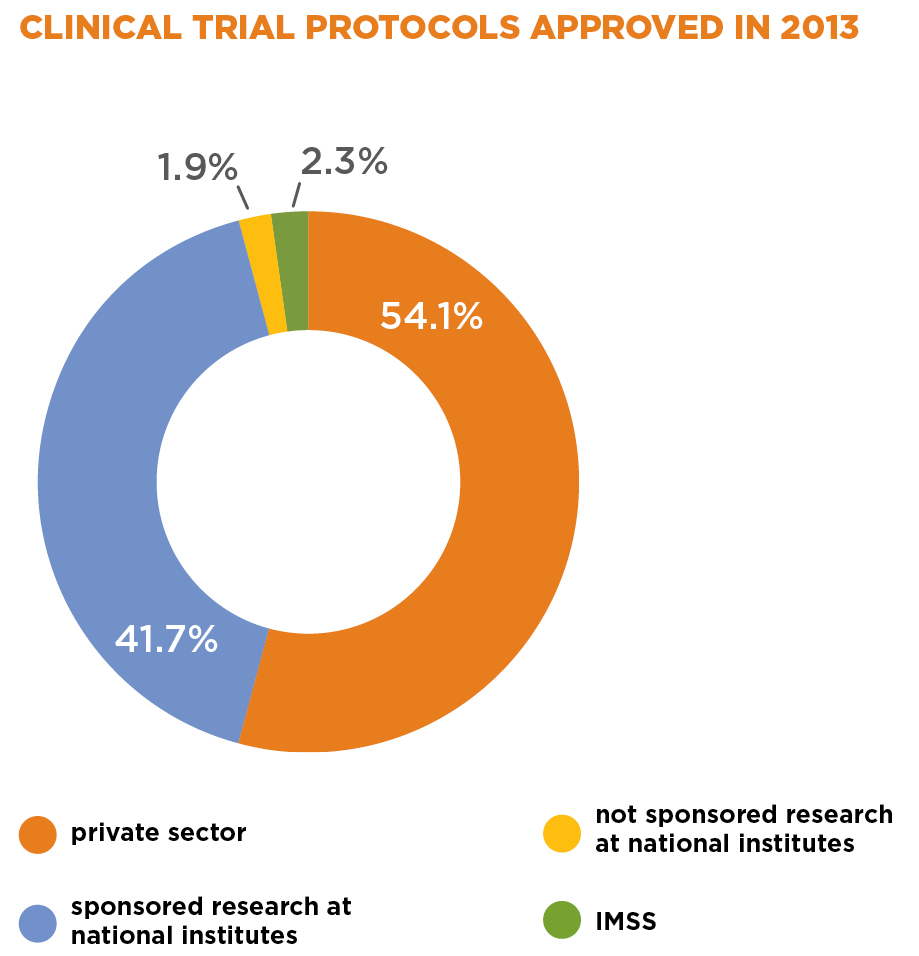 In order to reach international levels in R&D, CONACYT is currently implementing the Special Science, Technology and Innovation Program (PECiTI). This program aims to gradually raise the monetary resources for R&D until they reach 1% of GDP, contribute to the investment of human capital, promote the development of local the vocation and capabilities of local STIs to strengthen sustainable and inclusive regional expansion, and to fortify the scientific and technological infrastructure of Mexico. The council is also implementing several programs for promoting the sector including a Postgraduate Scholarships Program which granted scholarships to more than 400,000 students from national and international institutions. Additional programs by CONACYT to promote R&D in Mexico are the National System of Researchers (SNI), the Innovation Incentives Program (PEI), and Cátedras CONACYT. On the other hand an area that is growing strongly in Mexico is clinical trials. It is estimated that only one in every ten thousand developed molecules is released commercially and new drug application (NDA) numbers have been dropping worldwide. Clinical trials play a pivotal role in the pharmaceutical industry as they are essential for the development of new medications from these molecules.

As the strategic importance of emerging markets increases, clinical trials are set to flourish in Latin America, with Brazil and Mexico showing the fastest growth rates. Unfortunately, Mexico currently participates in only 2,213 out of 177,688 multinational studies. Thus, the different players of the Mexican healthcare sector and pharmaceutical industry must implement several measures to attract more trials to the country. Dr. Luis Miguel Beristain, Head of the School of Life Sciences of Tecnológico de Monterrey, points that in Mexico the overall cost of clinical trials is estimated to be 31.5% lower compared to costs in the US. In spite of reduced costs, the US National Institutes of Health cites Mexico’s participation in multinational studies at only 1.2% of studies conducted globally in 2014.

Mexico has qualified professionals, certifications, and regulations based on international standards, but the country lacks collaborative efforts and the efficient allocation of resources. Organizations must collaborate to develop more innovative research projects and increase their capabilities of locating funding, rather than struggling alone as is so often the case in Mexico. There is a significant opportunity for Mexico to create, join, and manage national and international research networks. For example, if several contract research organizations CROs in the country collaborated to develop research, refer volunteers, and share best practice, this would go a long way toward attracting more R&D to Mexican shores. Clinical trials stimulate the economy due to the need for pharmaceutical companies to sponsor studies and hire (CROs), local hospitals, universities, and research centers in which to conduct them. This represents more job opportunities, technical development for medical and non-medical staff, the possibility to develop new medicines, and increased opportunities for patients to access the latest treatments. In terms of career development, working on clinical trials for new molecules represents an excellent opportunity for researchers in terms of experience and trains them with advanced knowledge of emerging treatments.

With this in mind, there are several factors that influence the decision of a sponsor to bring clinical trials to Mexico. For instance, Mexico has a privileged geographical location, a large ethnically diverse population, qualified staff, low costs, treatment-naïve test subjects, and an improving regulatory framework. On the other hand, a considerable drawback for investors is the current long approval times for clinical trials. In order to reduce approval times, and indirectly make Mexico more attractive to potential investors, COFEPRIS recently implemented a procedure in which the National Institutes of Health pre-authorize study protocols within four weeks. Eleven support units (UHAPs), including IMSS and UNAM’s hospital, are expected to be approved for validation in the short term. Unfortunately, although drugs approved by the FDA do not need to undergo a renewal process, COFEPRIS requires renewal every five years, representing an administrative burden for both the regulatory agency itself and companies that finance R&D.

“These issues need to be addressed if we really want to improve Mexico’s competitiveness,” says Sandra Martínez, Regulatory Affairs Director LATAM from Aspen Labs. Mexican Official Norm NOM-012-SSA3-2012 establishes mandatory requirements with which researchers, pharmaceutical companies, sponsors, ethics committees and the regulatory agency must comply for research projects involving human subjects. Reforms to this NOM comprise specialized guidelines based on international regulations as well as the Good Clinical Practices (GCPs) of the International Conference on Harmonization (ICH), which are a set of homogenized ethical and quality standards for the protection of subjects who volunteer for clinical trials. Many professionals involved in this kind of research in Mexico are already trained and qualified on ICH’s GCPs, but these standards will soon become mandatory. Hopefully, such changes will enhance quality and competitiveness in Mexico.

The Mexican healthcare sector and pharmaceutical industry could capitalize on the country’s potential for more clinical trials and bring more foreign companies to the sector. If several clinical research organizations in the country worked jointly to attract more studies, develop their own collaborative research, refer volunteers, and share good practices, the resulting collaborative environment could be a valuable starting point for driving change. Moreover, closing the gap between the industry and academia may be indispensable in reducing the number of basic research projects that neither emerge into the market nor realize any valuable application in society. 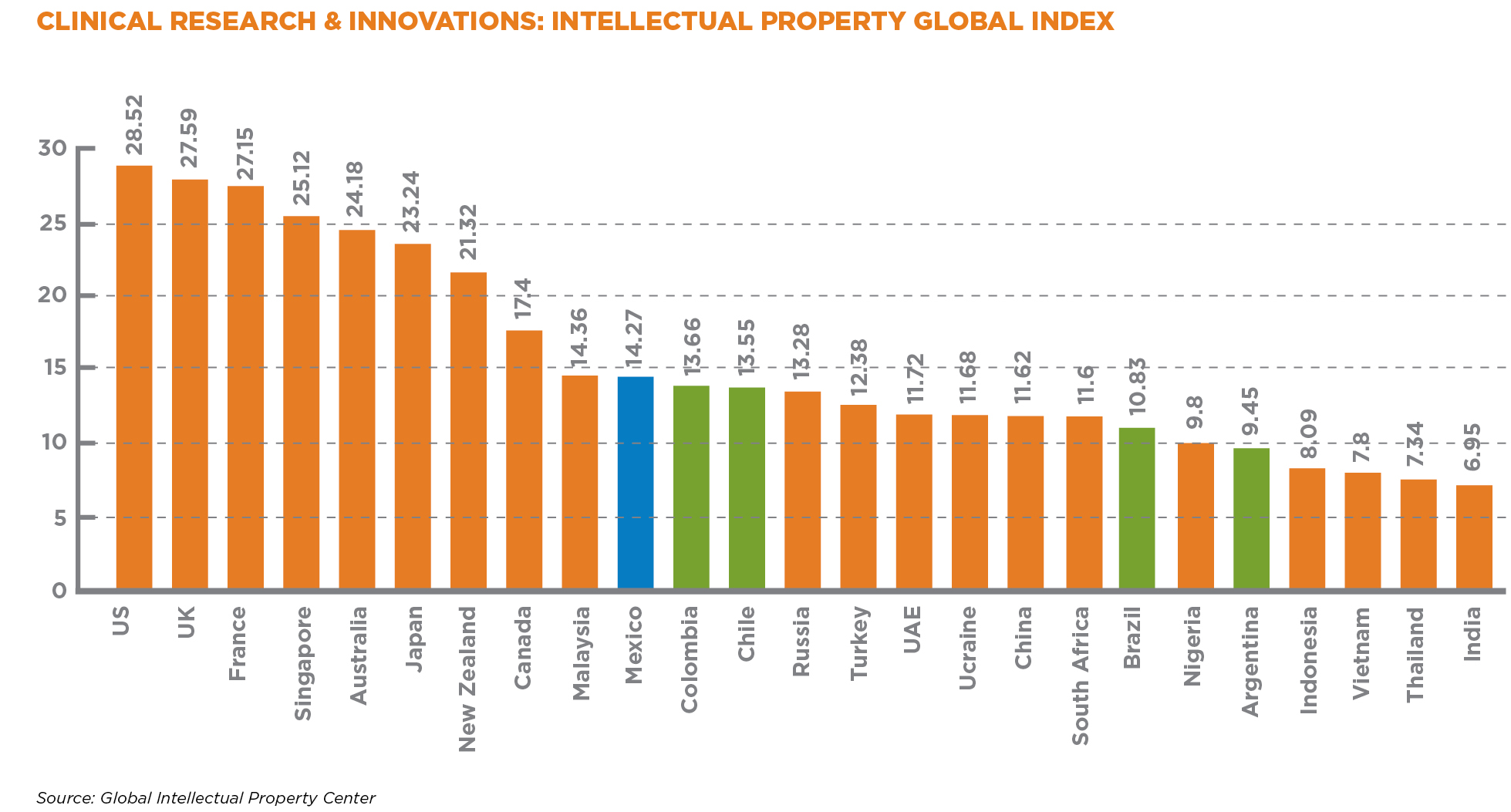