The Transformation of the Private Pharmaceutical Market

Looking at health and the care that this implies, certainly, most of us have experienced the urgent need to acquire medicine, either for pain, prevention or to comply with a temporary or prolonged treatment. However, thanks to the extensive offer on the market, which is vast in terms of product catalog as well as points of sale for acquiring it, obtaining a medicine today is usually a simple task.

But why is that? What happens behind the scenes that makes this task so simple for us? How do medications reach thousands of pharmacies in the country? What resources should a pharmaceutical company have to make the medicines available to more than 126 million people?

First, for pharmaceutical companies, distribution is complex. In Mexico in 2020, we counted at least 360 laboratories that sold 1.13 billion units of drugs, distributed across more than 40,000 pharmacies throughout the country. All of that within the traditional private channel, which is audited by IQVIA.

To achieve the supply of medicines, there are primarily two distribution models. The first is direct sales, which is when the pharmaceuticals bypass intermediaries and sell directly to large pharmacy chains and supermarkets, which are in charge of distribution to their pharmacies.

Second, the sale through an intermediary or distributor, which allows the movement of millions of medicines, with logistics solutions supported by technology and analysis of market behavior.

According to a study carried out by our Data Suppliers department, led by Roberto Castillo, on average, for every MX$100 that pharmaceuticals sell, more than MX$50 are achieved through distributors with national, regional or sub-distributors. The rest are sold directly to pharmacy chains and supermarkets. In 2020, both direct sales and sales through distributors grew by more than double digits.

For practically all independent pharmacies, selling through an intermediary or distributor is the way to stock their counters (about 20,000). This channel represents around 14 percent of sales and achieved growth of more than 15 percent in 2020 compared to the previous year, an increase that was even higher than that of the market overall.

It is the independent pharmacy segment that is evolving, with strategies that resulted in growth above their larger competitors. As in some other countries, these pharmacies have managed to strengthen themselves through chambers and associations, which allow them to centralized negotiations with distributors, achieving competitive commercial conditions, which, added to their geographical location, explains part of the growth they have achieved.

To further understand this growth, it is important to mention that sales of generic drugs are through the independent channel, the ideal point of sale in the most distant regions of cities. These products offer a lower cost to people with less purchasing power. 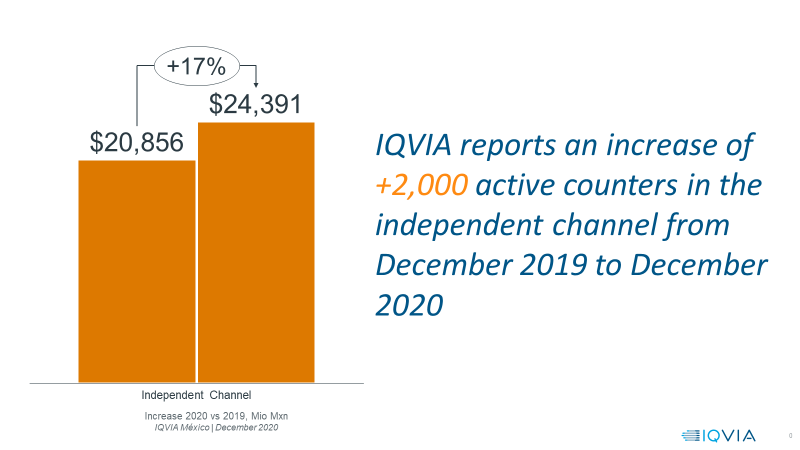 Regarding pure generic drugs, which label the drug's active substance but are not commercial brands, they achieved unit growth of more than 80 percent compared to the previous year. There are various hypotheses associated with this growth, the most recurrent being the high demand for the supply of prescriptions related to COVID-19, in addition to possible shortages in the public sector that were partly served by the private sector.

In Mexico, out of every 10 drugs sold, more than four correspond to pure generics. Paracetamol, ketorolac, diclofenac and omeprazole are the drugs that are most in demand among distributors and together represent almost 30 percent of the total parts sold in 2020. 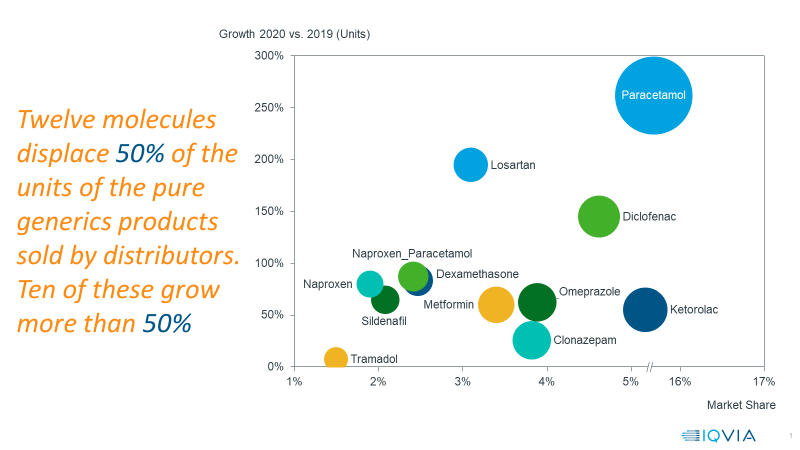 An alternative sales channel, which is worth mentioning due to its relevance during the pandemic, is e-commerce, which transformed shopping habits, leading us increased searches and purchases through internet portals, mobile applications and purchases by phone, given the sanitary restrictions and regulations imposed by local authorities.

There are still challenges to overcome for the channel, such as the sale of drugs that require a prescription or same-day delivery of urgently needed drugs. In this regard, IQVIA is working on new solutions that allow us to understand the channel's performance. We look at aspects such as new consumption habits, cross buying, and the socioeconomic profile of the buyer.

There is no doubt that COVID-19 has changed the behavior of practically every industry, and the pharmaceutical market is no exception. This market has transformed and there are an increasing number of relevant players in independent pharmacies and in e-commerce compared to the previous year.

Our projections indicate that 2021 will also be a positive year for the private pharmaceutical market with growth approaching double digits.

Health
The Transformation of the Private Pharmaceutical Market