Biotechnology, defined as the use of cells, cellular components, and biological processes to develop new technologies, has numerous applications in many areas including industry, agriculture, and healthcare. This area is rapidly developing and in 2013 the market worldwide was valued at US$270.5 billion and is expected to grow at a compound annual growth (CAGR) rate of 12.3% from 2014 to 2020, according to Grand View Research. One of the strongest areas of biotechnology is biopharmacy, which represented 62.1% of revenue in that same year. This area is followed by bioservices (24.7%), which refers to the use of biotechnology in preclinical and clinical research. Among the reasons for the growth of this market is the current trend from international pharmaceuticals to launch their own biotechnology products, either by creating their own biotech division within existing companies or by acquiring biotech firms. In 2018, seven of the 10 top-selling drugs will be biopharmaceuticals. Large biotechnology companies such as Novo Nordisk and Amgen are now powerful players in the pharmaceutical sector due to the strong link between biotechnology and the drug discovery process. While the mayor players in the field are based in Europe and the US, biotechnology production in India, China, and other emerging countries has expanded by double digits over the past few years, leading pharmaceuticals to outsource R&D to these markets. 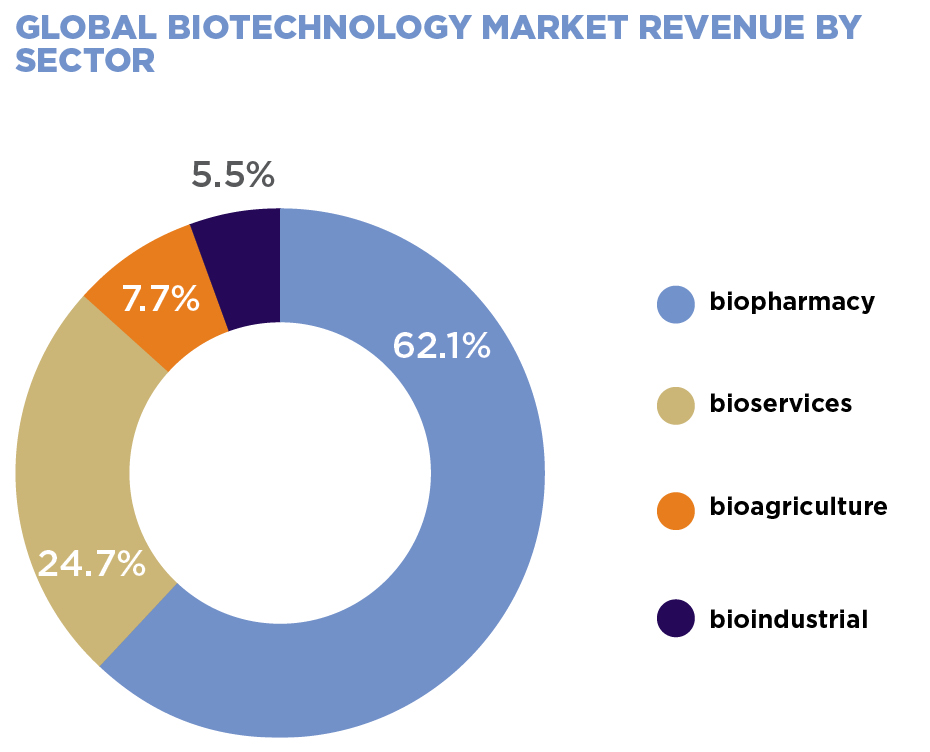 Medical biotechnology has brought many positive changes to the practice of medicine, leading to new ways to design and produce medications targeted at a molecular level, the development of more accurate tests for disease diagnosis and even genetic and proteomic tests for disease prevention, and the possibility to use gene therapy to cure diseases previously considered incurable. Biotechnology also brings the promise of personalized medicine, which will allow tailored therapies for individual conditions and needs.

A significant drawback of biotechnological drugs is that they can be much more expensive than conventional therapies. Prolonged timeframes required to identify the target therapy and determine its genetic sequence, create the need for greater investment in biotechnology R&D than conventional drugs (20%-25% of revenue in comparison to 15% according to EuropaBio). Taking into account the complexities in developing new biotechnological drugs and in replicating their manufacture, many large pharmaceuticals are acquiring biotechnology companies in order to economize on development costs, and biotechnology companies are implementing manufacturing and commercialization schemes. Smaller firms are also collaborating with pharmaceuticals or academic institutions to fund R&D. Investments in R&D in medical biotechnology are expected to grow by 4.2% annually and reach US$30.5 billion in 2020, according to IBISWorld.

Mexico has more than 20 years of experience in the biotechnology industry with over 132 products registered. The industry now represents 35% of the applications for new medicines, according to COFEPRIS. Most of these medications are intended to treat cancer, rheumatologic, and neurological diseases. Mexico is focusing mainly on biocomparables, also known as biosimilars, the generics of biotechnological drugs for which patents has expired. In 2015, 32 products with combined sales of more than US$50 billion will lose their patent, representing a huge opportunity for biocomparables manufacturing. Nevertheless, due to the complicated manufacturing process, which often requires live, genetically modified organisms, biocomparables require a much more complex manufacturing process than regular medicines. Several laboratories are undertaking this production including Probiomed, Landstainer, Psicofarma, Liomont, and Pisa. Mexico is one of the few developing countries with a strong regulatory framework for biotechnological products and biosimilars. In 2009, article 222 Bis was added to the General Health Law to define the legislative basis for the regulation of biotechnological products and biosimilars. This legal framework had several loopholes as many medications were registered as conventional generics in order to avoid implementing compliance measures. Between 2009 and 2014, around 65 products were registered as generics under less strict regulatory requirements, but in December 2014 the publication of the Mexican Official Norm 257 led to their reclassification and demanded producers perform necessary biocomparable studies. Currently, all biosimilars must prove their safety and efficacy, as well as their close similarity to the reference product.