Universal Healthcare in a Changing Landscape

Health protection is a universal right in Mexico as dictated by Article four of the Federal Constitution. Nevertheless, only in 2015 has this achievement become attainable with 96.7% of the population currently covered by one or more healthcare institutions. This development can be attributed to a new alignment with one of the five fundamental goals of President Enrique Peña Nieto’s National Development Plan 2013 – 2018, the ultimate aim of which is an inclusive Mexico. One proposed strategy to achieve the measures set out in the Plan consists of ensuring access to healthcare services through the construction of a universal National Healthcare System, in which prevention, protection, and promotion of health are prioritized.

Mexico is in the midst of significant demographic and epidemiologic changes commonly associated with its current transition toward becoming a fully developed country, with an increasingly aging population and the rise of chronic and degenerative diseases. Life expectancy increased from 41.5 years in 1940 to 74.3 in 2012, with a significant reduction in mortality levels across practically all demographics, a level of progress mainly caused by higher living standards. As Mexico’s population ages, the population pyramid is destined to invert, with the largest group consisting of individuals between 50 and 55 years old by 2050, in contrast to ten to 25 years old in 2010. Developments in hygiene education and public infrastructure, with the introduction of potable water and proper sewage disposal, have played an important role in shifting Mexico’s epidemiologic profile from a focus on acute infections to chronic non-communicable diseases. In 1990 the three main causes of death in Mexico were cardiovascular diseases, pneumonia, and diarrhea, whereas today cardiovascular diseases, diabetes mellitus, and malignant tumors are the principal causes of mortality. In fact, 25 years ago, seven out of ten Mexicans fell within parameters for a normal Body Mass Index (BMI), but the current scale indicates that seven out of ten Mexicans are overweight. All of these factors represent a strain on the healthcare system, creating a necessity to adapt in order to improve public access to high quality services.

Despite its progress, the achievement of similar indicators to those of other OECD countries remains a challenge for Mexico. The average life expectancy across OECD countries is 80.1 years and the neonatal mortality rate 2.8 per 1,000 births, compared to 8.6 in Mexico. In addition, healthcare spending in Mexico represents 6.2% of the gross domestic product (GDP), well below the OECD average of 9.3%. Of the total healthcare expenditure in Mexico, 51.7% is invested by the public sector and 48.3% is private, according to the WHO. Out-of-pocket spending represents 91.5% of private expenditure, the largest percentage among OECD countries and a factor that could present a significant access barrier to healthcare services. Furthermore, human resources are a vital component in the improved performance in any healthcare system, meaning that the strain of Mexico’s healthcare sector is further exacerbated by the fact that the number of physicians in Mexico is around two per 1,000 inhabitants, which falls below the WHO minimum recommendation of 2.9. Not only does Mexico need more physicians, but also a more equitable distribution across the different regions and states. 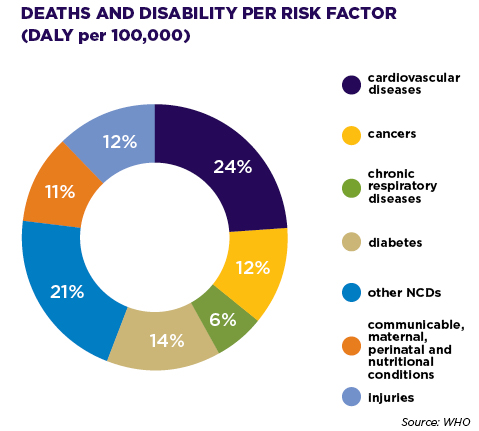 In Mexico, the healthcare system is comprised of the public and private sectors. The former includes institutions such as The Mexican Social Security Institute (IMSS), the State’s Employees’ Social Security and Social Services Institute (ISSSTE), Petróleos Mexicanos (PEMEX), the Secretariat of Defense (SEDENA), and the Secretariat of the Navy (SEMAR), all of which offer social security for a total of 72 million people including employees and their families. Additionally, the Ministry of Health, State Healthcare Services (SESA), the IMSS-Oportunidades Program (IMSS-O), and Seguro Popular rely on the federal and state governments as well contributions to cover the unemployed and self-employed, who otherwise pay out of pocket expenses for private healthcare. The private sector consists of insurance companies as well as healthcare providers such as private hospitals, clinics, and consulting offices. The number of people with private insurance is 8.9 million, just 7.3% of the population. Beneficiaries tend to duplicate coverage in both public and private sectors, and therefore optimizing services while expanding access remains a challenge for the national healthcare system.

The National Commission of Social Protection for Health (CNPSS), also known as Seguro Popular, was created by means of reforming the General Law of Health in 2002 with the aim of providing health protection for all people without social security. Having been implemented in 2004, the organization offers The Catalogue of Universal Healthecare Services (CAUSES) as well as the Fund against Catastrophic Health Expenditure (FPGC). Its creation is aligned with governmental efforts to achieve universal healthcare coverage, and the agency currently provides protection for 55.6 million Mexicans. 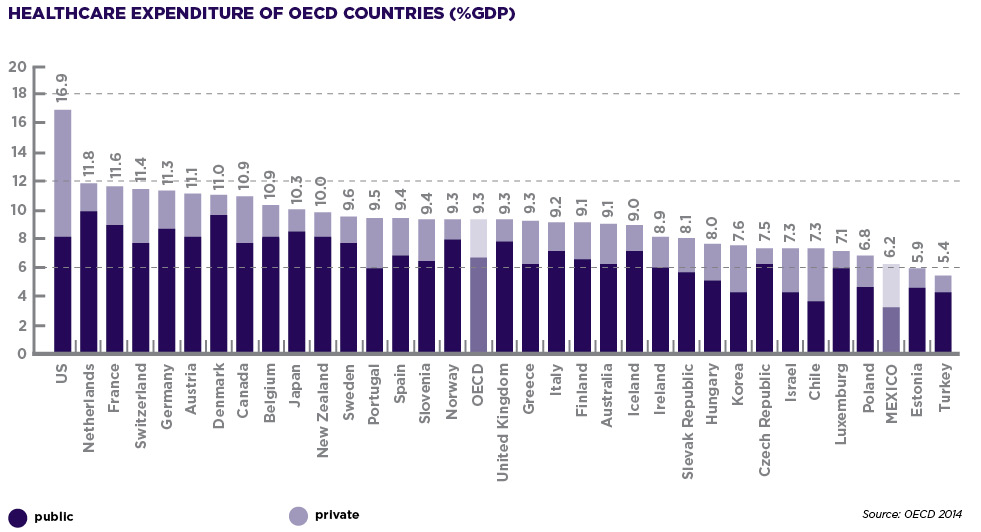 Providers within the healthcare sector include hospitals, clinics, pharmaceutical companies, medical devices and infrastructure, pharmacies and diagnostics laboratories, among others. According to the National Healthcare Information System (SINAIS), the number of medical units, consisting of private and public hospitals, ambulatory care, and social assistance units, increased from 19,505 to 22,228 between 2003 and 2013, which represents a 14% increase. An important phenomenon is the growing number of people visiting doctors at pharmacies as pharmacy chains continue growing across Mexico.

Mexico is the eleventh largest pharmaceutical market in the world and the second largest in Latin America, with an average growth rate of 4.3% per year between 2007 and 2013. The industry is worth approximately US$13.2 billion as reported by the National Chamber of the Pharmaceutical Industry (CANIFARMA), representing 1.2% of the country’s GDP. Growth in the pharmaceutical industry in Mexico is largely driven by generic medications, which represent 80% of the total sales volume. This trend is caused by patent expirations, decreased prevalence of the drug development process globally, the Mexican market’s price sensitivity, the national generics policy, and new regulations on bioequivalence resulting in increased confidence in generics. From 2008 to 2012 government spending in medicines increased by 64%, but integrating new medicines into the catalogs of the General Health Council and institutions such as IMSS and ISSSTE remains a challenge for innovative pharmaceutical companies.

By largely abandoning the development of new antibiotics, big pharmaceutical companies have now placed an increased importance on chronic and degenerative diseases such as diabetes, a market with a value worth MX$6 billion. With the fierce competition generated by the introduction of generics, big pharmaceutical companies are being increasingly forced to adapt strategies including incorporating generic drugs into their portfolios or establishing an increased focus on innovation, often through the acquistion of other innovative companies.

Distribution channels also underwent important changes between 2014 and 2015, with mergers and acquisitions as well as new international players transforming the rules of the game in the segment, pushing manufacturers to develop new negotiation schemes within the supply chain. After the local plant requirement was derogated in Mexico, many companies were able to adjust from a focus on manufacturing to concentrating investment on innovation.

Investment in clinical research in Mexico is set to increase from US$160 million to US$500 million in ten years, according to the Mexican Association of Pharmaceutical Research Industries (AMIIF). Mexico invests 0.54% of its GDP in research and development (R&D) and this figure is expected to increase to 1% by 2018. Pharmaceutical companies established in Mexico allocated 13% of their total investment to R&D in 2011, representing MX$22.6 billion with 37.4% of this figure assigned to phase III clinical trials, according to CANIFARMA. Furthermore, a significant part of the clinical research in the pharmaceutical industry is concentrated on biotechnology. Today 35% of new drug registrations in Mexico are biopharmaceuticals, most of which are designed to treat cancer and neurologic and rheumatologic diseases. The legal and regulatory framework for biopharmaceuticals in Mexico is complete and clear, with a special focus on biocomparables, which are the subsequent versions of biotechnology medicines after patent expiration.

Regulatory improvement is inextricably linked with the above-mentioned improvements. COFEPRIS issued 23,736 sanitary registrations from March 2011 to February 2015, partly due to the implementation of a pre-authorization process in which processing time was reduced by approximately two years on average. In addition, 31 active substances have been released since October 2011, resulting in 340 new market authorizations of generic medicines that relate to 71% of mortality causes in Mexico, and allowing additional treatments for more than one million patients in the public sector. As for innovative medicines, Mexico recently became the fastest country to authorize commercialization of new molecules. COFEPRIS issued 133 new market authorizations for 20 different therapeutic areas covering 73% of mortality causes in the country between 2010 and 2014. In addition to improving approval times for medicines, COFEPRIS became the fifth Latin American regulatory agency to receive the PAHO certification as a reference body in 2012, enabling Mexican registrations to be recognized in seven countries in the region. COFEPRIS was also declared a functional agency for vaccines by the WHO in 2014, now belonging to an elite group of 28 countries that possess this accreditation.

While achieving universal coverage in Mexico has been a difficult and ambitious process, the process can be galvanized with the cooperation of all actors in the value chain. Increasing access to healthcare products and services is a common goal within the industry, with the ultimate aim of improving the health of the Mexican population in order to propel Mexico to the forefront of the world stage as a more productive and economically prosperous country. 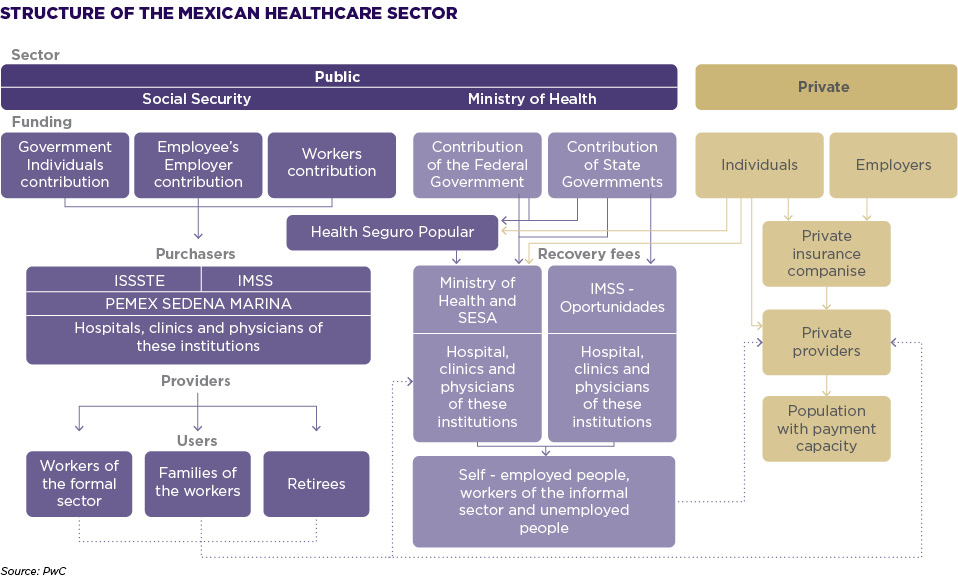